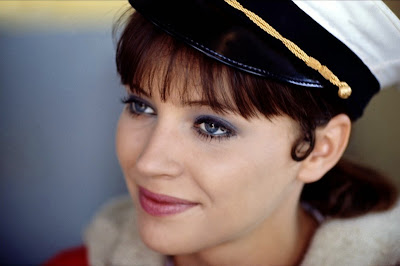 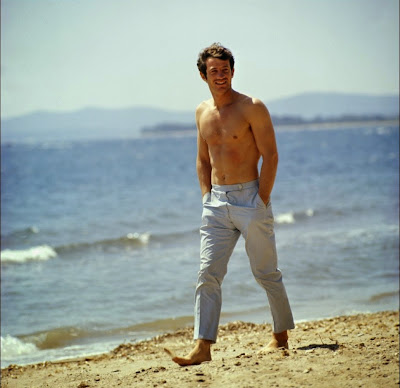 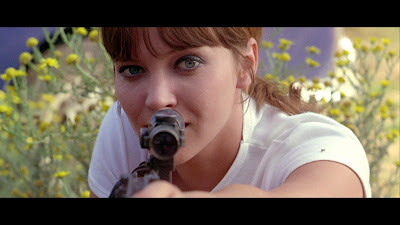 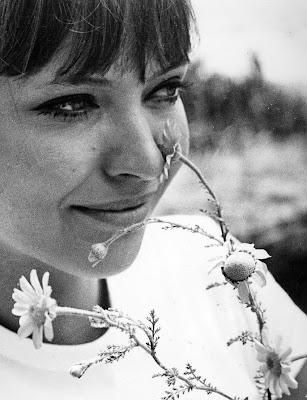 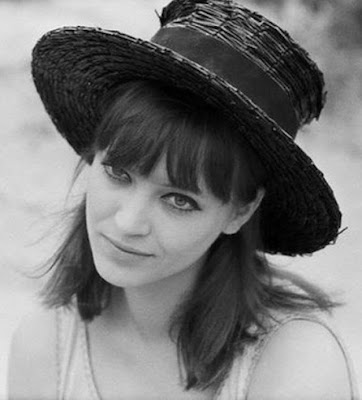 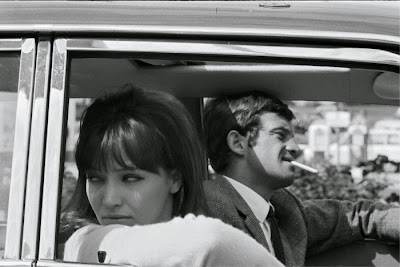 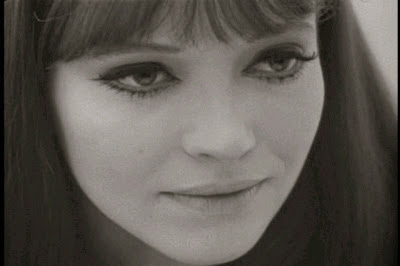 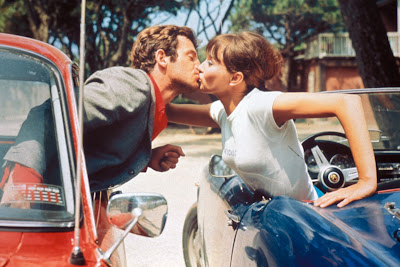 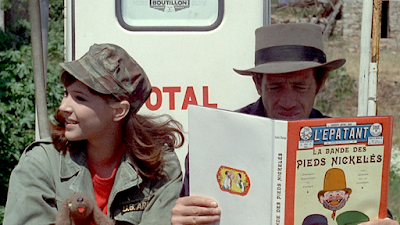 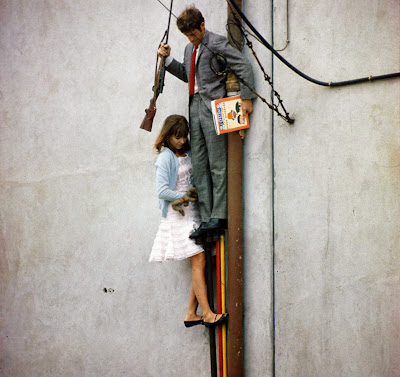 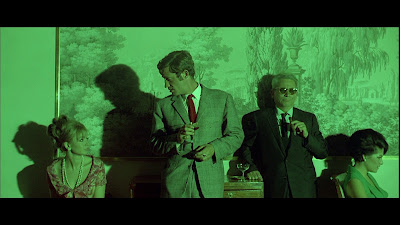 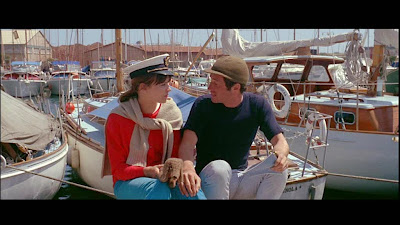 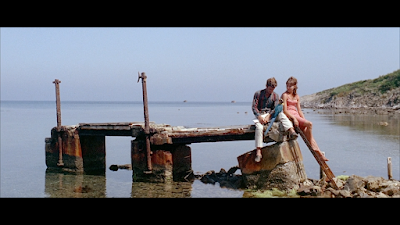 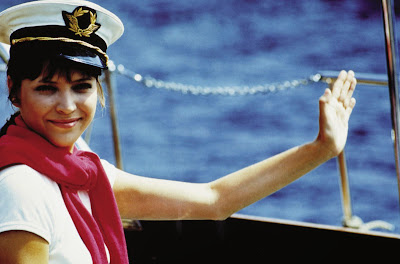 A much heralded work at the time, arguably Godard’s only pure comedy (though it ends in tragedy), a film about obsession and sexual betrayal filled with an impressionistic stream of cultural references.  Using a deluge of color filters, including a boring party sequence where the entire conversation is a collage in the wordspeak of advertising, a tribute to a young American director Sam Fuller who is in Paris to shoot a film, much like Fritz Lang was used earlier in Contempt (Le Mépris) (1963), a book passage reference to the painting of Velazquez, who at the age of fifty changed the style of his painting to something less realistic, finding the space that lay between objects to be much more fascinating, using a sort of mock energy derived from exhibiting purely adolescent behavior, sort of a cross between Godard’s earlier 1964 films Band of Outsiders (Bande à Part) and A MARRIED WOMAN, the former showing a kind of boundless youthful energy while the latter reveals the dissolution of his own marriage, again utilizing the talents and beauty of his former model, actress, and ex-wife, Anna Karina (divorced in 1964), who is as luminous as ever, this time cast with a clueless Jean-Paul Belmondo who at age 35 has the attention span of a teenager.  The last time they worked together was on A Woman Is a Woman (Une femme est une femme) (1961), which has a similar red and blue tinted color scheme.  While this attention deficit disorder may have helped drive the energy in Breathless (À Bout de Souffle) (1960), it feels artificially contrived here for a filmmaker in his mid-thirties to have his adult leads playfully behave like teenagers.  How many times in his career does this director repeat this technique?  This feels like an overpraised, yet overly colorful commercial vehicle starring pretty faces in pretty locations, the point in his career when Godard became an advertising brand name, like Warhol’s Campbell's Soup Cans.

While there’s plenty to like here, there’s also a good deal of annoying repetition, where the director is so beholden to maximizing his own style that he allows the film to drown in a sea of indifference, featuring giant comic book images mixed with classical paintings, advertising images, musical themes that literally stop and restart, suggesting emotional fragmentation, with Godard’s neverending critical self-analysis, as reflected by actual passages read from books that Belmondo is reading, attempting to voice the director’s point of view, while Karina could care less, and is instead intoxicated by being alive and is actively swept up with the joy of living.  Their opening scene together may be the most memorable, as not only is there a dead body that they both completely ignore lying in the next room with a pair of scissors jammed into the back of his neck, blood streaming onto the mattress with automatic weapons stacked up in the corners of the room, but Karina breaks out into song, where Godard takes his turn at a Jacques Demy style love affair, a scene that is simply mind boggling in its simplicity and elegance and for the darker world that it strangely ignores.  Like characters from a pulp fiction novel, the divide between them only grows deeper, where they head south, escaping the sadness of the city and retreat to an isolated island, a kind of love purgatory preceding the inevitable abyss to come, “the story of the last romantic couple,” according to Godard, where they are alone, deliriously happy in one another’s arms in one moment and inexplicably void of any interest in the next.  French films have a peculiar fascination with Esso gas stations onscreen (where Belmondo utters the catch phrase “Put a tiger in my tank”), from the classically elegant Jacques Demy finale of The Umbrellas of Cherbourg (Les Parapluies de Cherbourg) (1964) to the Godard films of the 60’s, a company synonymous with America, wrapped in the red, white, and blue colors of the American and French flags.

Based on Lionel White’s 1962 novel Obsession (140-page noir thriller, though uncredited, which is typical of Godard), altering the tone, rendering it both delightfully absurd and incomprehensible, preferring to use as much improvisation as possible, creating a completely spontaneous film, where he was questioning himself as an artist, hoping to recapture some of that magic with this film, adding whimsy, surreal Brechtian poetry, and musical comedy routines, where the lightness of the film is just so breezy and disaffecting, oftentimes ridiculous.  Any ounce of emotion seems to pass right over this fashionably attractive couple playing Bonnie and Clyde (1967) outlaws on the run, fleeing to the exotic locale of the French Riviera in the south of France’s ravishingly beautiful Cote d’Azur set on the always sunny Mediterranean coast, shot in sumptuous ‘Scope film by Contempt (Le Mépris) (1963) cinematographer Raoul Coutard, who must have shot a dozen Godard films, where they are seen riding boats, climbing into fast sports cars, and carrying on endlessly quasi-witty, dead-end conversations with one another, with goofy sketches resembling parodies and comic book inserts.  At times reminding viewers of an earlier draft of Bertolucci’s LAST TANGO IN PARIS (1972), especially when Karina is dressed in her sailor suit and even salutes, very much in the manner of Maria Schneider, where another uncommunicating couple similarly lose themselves to an ever deepening divide.  Belmondo spends his time passively writing in notebooks (scribbled in Godard’s handwriting, interjecting himself into the film), as words and phrases go whizzing by the screen awash in different primary colors, suggesting a swirling, everchanging emotional center that continually gets pulled further and further apart.  The finale is written as a metaphor, and is considered in some circles as one of Godard’s most brilliant, but seems entirely too simplistic, more of a farce, bordering on the ridiculous to the point of being silly, lighting the fuse to his own self-destruction (finally asserting himself), becoming a caricature of an event utterly lacking in depth of emotion, completely removed from our attention span by that time.  But perhaps that’s the point.
Posted by Robert Kennedy at 12:01 AM