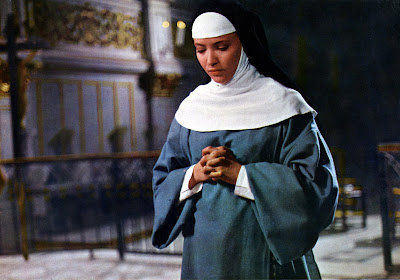 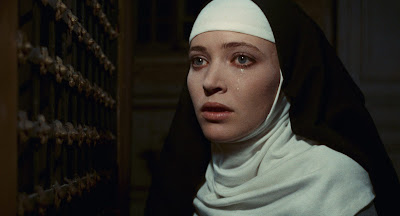 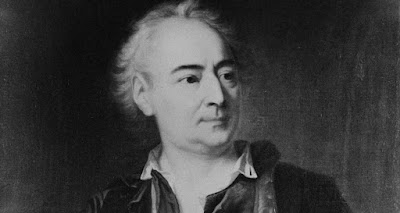 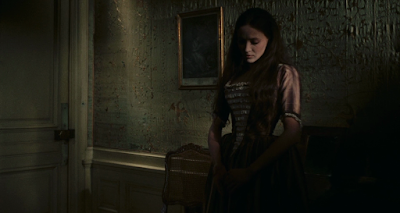 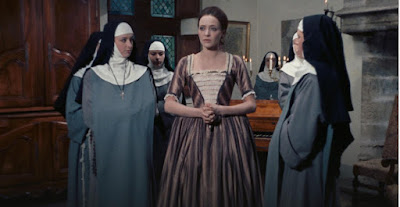 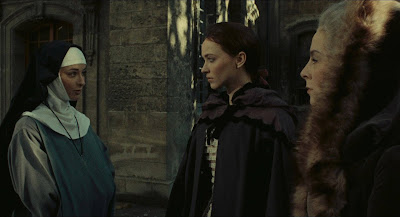 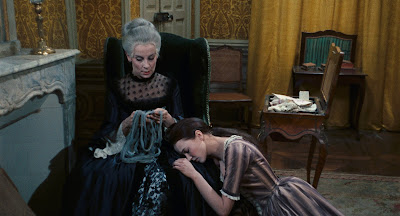 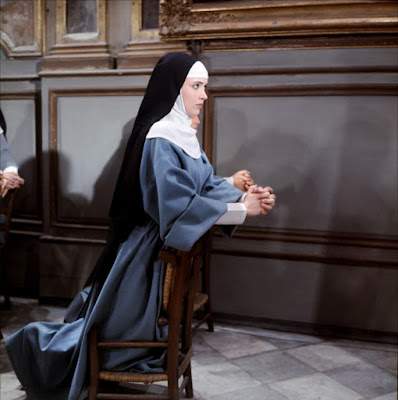 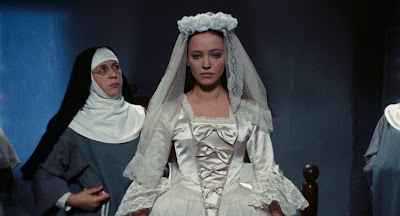 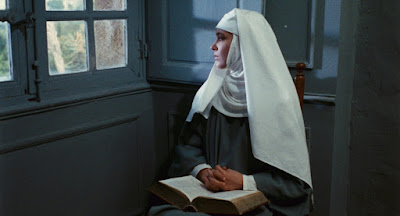 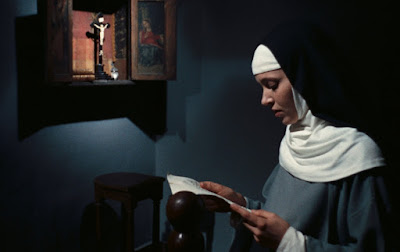 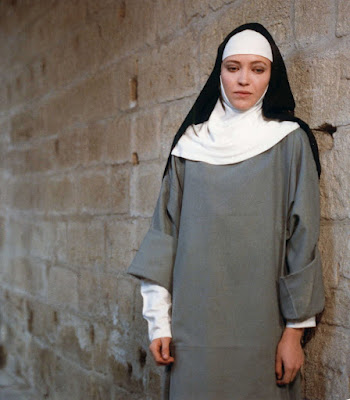 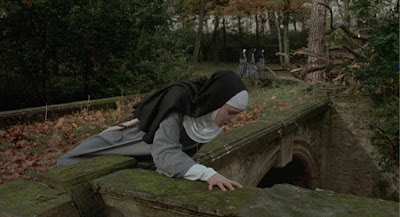 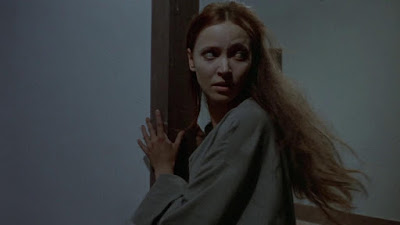 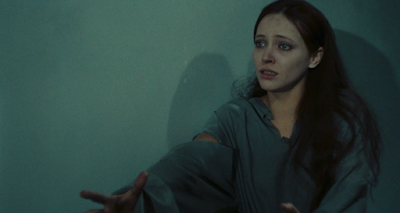 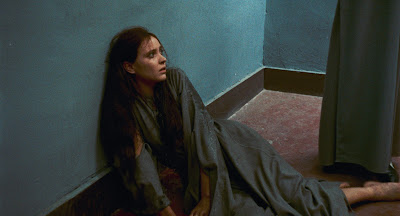 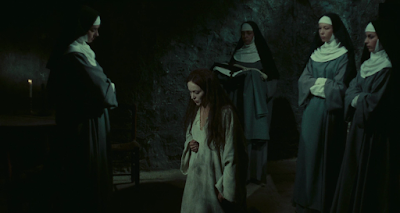 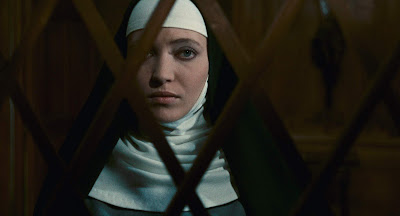 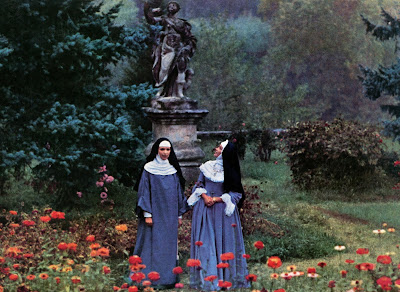 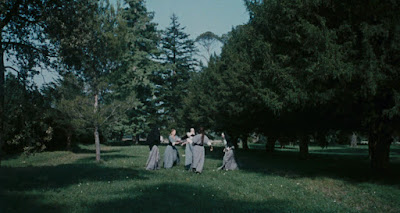 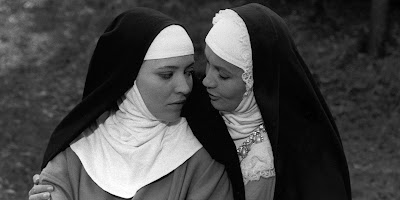 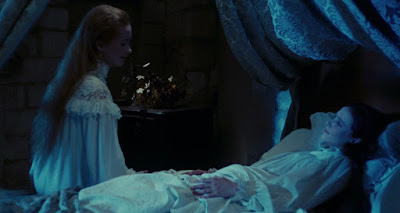 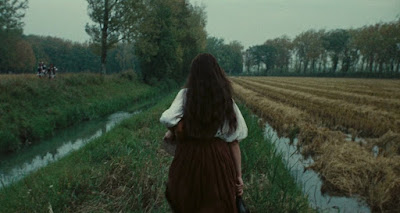 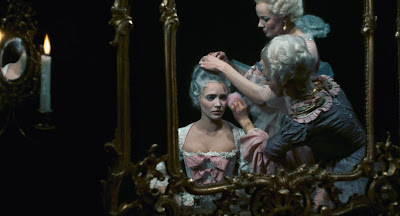 This film originated as a theatrical play in 1963, as do many of Rivette’s works, with Rivette and Jean Gruoult adapting an 18th century novel by Denis Diderot published posthumously in 1796, much like Cassavetes’ gut wrenching emotional journey in A Woman Under the Influence (1974), with actress Gena Rowlands believing the daily performances of the role would be too demanding, that no one could survive such a harrowing test of endurance, all of which suggests the viewing audience will be pushed to the limits, as this is a scathing feminist portrait on the treatment of women in the 18th century, as revealed by the extraordinary power and range of actress Anna Karina as Suzanne Simonin, the teenage daughter of a once-rich family that can no longer afford to support her, so in keeping with the customs of the times, they send her to a convent where she will supposedly be treated well and lead a peaceful life.  Little thought was given to public scandal, as these decisions were framed with the idea of accommodating the needs of women, offering them a place of comfort where they would be housed and fed and taken care of by the Church, creating a fascinating portrait of psychological turmoil and even torture, as one woman rebels against the tyranny of repression while remaining innocent and devoutly religious, but unwilling to sacrifice her personal freedom, refusing to be held prisoner against her will for a religious calling she refuses to serve, petitioning the courts for the injustice of her position, forced to become a nun expressly against her wishes, yet due to the supreme authority of the Church in France, courts refused to intervene, even after her family refuses to take her back, leaving her no option but to suffer the consequences.  What’s particularly striking is the captivity aspect, where she is literally imprisoned against her will with no escape, where her predicament grows more dire when the Mother Superior turns against her, conspiring with the other nuns to treat her with malicious contempt, refusing her food and clothing, singling her out as a Satanic witch in their presence that deserves to be ostracized, where her treatment is vile and punitive.  In many respects this historical treatment is similar to Bresson’s The Trial of Joan of Arc (Procès de Jeanne d'Arc) (1961), each innocent yet suffering the wrath of their accusers, led to believe they are insane to take such a firm and committed stand, refusing to budge in their beliefs, yet both were abused by church leaders in positions of power who refused to intervene and instead allowed hypocrisy and religious hysteria to prevail.

Causing an outrage at the time of its release, particularly in such a Catholic-dominated society as France, provoking a letter-writing campaign from Catholic officials even before the film was completed, the film was banned by the de Gaulle government in March of 1966 before its first public screening, reportedly because of its cynical views of the Catholic Church, allowing an exception to premiere at the 1966 Cannes Film Festival where it was received to great acclaim, yet even a mention of the ban was banned from television reporting, provoking a storm of protest, with Godard writing a stinging denunciation of de Gaulle’s minister of culture André Malraux for his cowardice in allowing this to happen, describing the censorship as the “Gestapo of the spirit,” having to go through a lengthy court process to get the ban lifted after more than a year in September 1967.  While certainly not an attack on the Christian faith or against the principle of religious life, the character of Suzanne Simonin herself remains intriguing, as she’s an innocent, untainted by sex or scandal, remaining a virgin, an ardent believer, praying regularly and obeying the rules of the convent, yet she feels suffocated by her cloistered confinement, deprived of an ordinary life, forced into a life of discipline and austerity that she finds intolerable, as monastic life is not for everyone, preferring to live in the outside world, even without a penny to her name.  Perhaps the only Rivette film that doesn’t involve a web of mysteries, which, curiously enough, never seem to get solved, yet it draws us into the fictional aspect of the story, with viewers more interested in the experience than any solution.  Remaining faithful to its 18th century setting, almost entirely set indoors in tiny, claustrophobic rooms, cloistered walkways, gloomy cells or chapels, eerily suggestive of Polanski’s REPULSION (1965), especially the tormented anguish suffered throughout that borders on insanity, the film calls into question contemporary ideas of faith and freedom and a woman’s place in the modern world.  Much like Haneke’s The White Ribbon (Das Weiße Band – Eine deutsche Kindergeschichte) (2009), we learn that sadistic attitudes typically develop in closed and isolated communities, where the isolation itself protects the perpetrators against any possible repercussions, as no one is held accountable, as they are outside the realm of society’s watch, out of legal jurisdiction, in a no man’s land where only the Church may intervene, yet their flawed authoritative representatives are the cause of the affliction.  Not only does Rivette make sure of the visual contrast between routine church ceremony and a nun’s open mistreatment, but also provides an avant-garde soundtrack highlighting atonal music, insect noise, strange percussion sounds, and a thunderous church bell, a symbol of the oppressive presence of the church, ominous in its dire implications, but silent when it comes to providing actual relief.

Reminiscent of Marco Bellocchio’s VINCERE (2009), or Bruno Dumont’s Camille Claudel 1915 (2013), where oppressive powers routinely subjected women to demeaning and humiliating institutionalization, often as a means to silence them, drawing inspiration from Mizoguchi’s THE LIFE OF OHARU (1952), a film universally beloved by the Parisian Cahiers du Cinéma critics, with Rivette openly challenging the conservative rigidity of the de Gaulle government, the film is divided into three sections, each escalating the hopelessness of the situation, starting with her family offering her to the church, just as they might place coins in the collection plate, but here it is in human form, leaving her forever in the hands of the church, with the family abandoning all ties to her in a cynical collaboration of church, state, and family, using the convent as a means of social control.  As we come to learn later, she is cast out as she’s not her father’s daughter (something the mother doesn’t want her husband to know), the subject of possible gossip or scandal, so they simply get rid of her to protect family appearances and their good name.  Her mother insists upon instilling guilt upon her daughter, suggesting that her daughter must atone for her own sins by taking the vows and sacrificing her life to God, negating her own personal freedom.  In this way she may appease her mother’s conscience, but what of her own?  This existential question forms the basis of the film, becoming a parable about liberty, secular or sacred, in a society that oppresses women and uses ideology to maintain power.  As described by Village Voice critic Molly Haskell in James Monaco’s The New Wave, The New Wave: Truffaut, Godard, Chabrol, Rohmer, Rivette:

Diderot’s nun, like very few women in life and fewer in literature (some of Ibsen and Shaw’s heroines maybe) desires freedom, not for love of a man, or for God, but for its own sake.  She is capable of disinterested desire, of passion for a principle, and she seeks liberty rather than romance or security or rest or the other pragmatic goals which are considered to be the instinctive aspirations of women. Under Rivette’s direction, Anna Karina gives us just such a nun, serious, intelligent, innocent, her life and her purity seen as one continuous impulse towards freedom.  She is, to use Simone de Beauvoir’s distinction, transcendental rather than immanent, but she is also feminine.

While the novel is narrated from the heroine’s point of view, Rivette’s film adopts an exterior point of view, eschewing close-ups, always maintaining a distance, yet it’s still a probing psychological portrait that explores Suzanne’s developing conscience, which differs drastically as she passes through the hands of three different Mother Superiors, moving through a series of ritualized dramatic actions which emphasize her Christ-like suffering and sacrifice.  The distraught Suzanne finds solace in a kindly Mother Superior, Madame de Moni (Micheline Presle), who has followed and understands her situation, offering sympathy and a kind of benevolent mysticism, but urges her to accept her fate and make the best of it.  When she dies, a stricter Mother Superior arrives, Sister Sainte-Christine (Francine Bergé), who holds it against Suzanne that she is placed in a more unfavorable light than her predecessor, and here Suzanne’s resistance is met with puritanical wrath, where she is singled out and ostracized, unable to talk to or touch anyone, treated like a condemned criminal, starved and dressed in rags, whipped, spat upon and sadistically forced to do the drudgery chores, where her treatment becomes a form of psychological torture.  Much of this is in response to Suzanne’s receiving visits from a lawyer in pursuit of her legal challenge to rescind the vows made against her will, where her treatment inside the convent continually deteriorates as they contemplate an exorcism, believing she’s possessed by Satan.  The communal hysteria surrounding her treatment is like a religious shunning, reaching melodramatic heights at times.  When the case is investigated by the church, having no intentions whatsoever of releasing her from her vows (claiming the floodgates would open), Suzanne says to the visiting Archdeacon, “All I have done wrong is not to be called to the religious life and to seek to rescind the vows which I made against my will.”  The request is denied, but her attorney does succeed in having her removed to a different convent, where she is pleasantly received by her new Mother Superior, Madame de Chelles (Liselotte Pulver), making a spectacle of her arrival, lavishing her with plenty of doting affection and attention, offering her sweets, calling attention to her beauty, even providing her with a mirror, all in an attempt to view her in an erotic light, with her previous favorite growing overly hostile in this radical change in the pecking order.  This Mother Superior becomes fixated on her new charge, visiting her bedroom late at night, asking personal questions about her inner desires, always wanting to be alone with her, arousing fear and suspicion, especially when a monk insists that she must reject her advances at all costs, as if her life depends upon it.  This results in a different kind of hysteria, with Rivette suggesting the thought of escape is nothing but a delusion, that she still remains in a state of captivity.  There are no theological arguments in the film, with Suzanne’s devotion to God remaining unwavering throughout, despite her harrowing ordeal, enduring endless wrath heaped upon her nonetheless, as if condemned to her fate, eventually discovering it’s no less oppressive on the outside, where New Wave icon Anna Karina, like Sandrine Bonnaire in Varda’s Vagabond (Sans toit ni loi) (1985), serves as a model for the younger generation of women who have grown tired of being oppressed by an intolerant patriarchal society setting all the rules.
Posted by Robert Kennedy at 12:04 AM