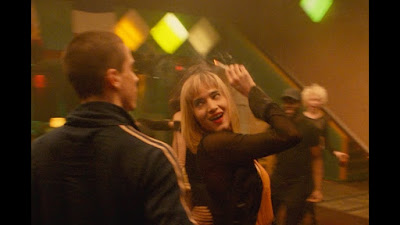 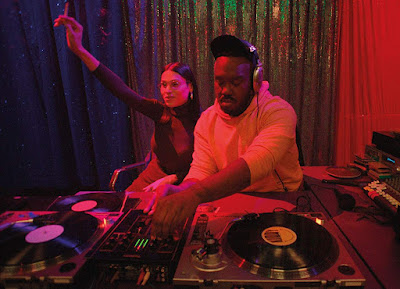 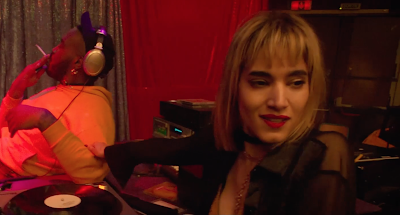 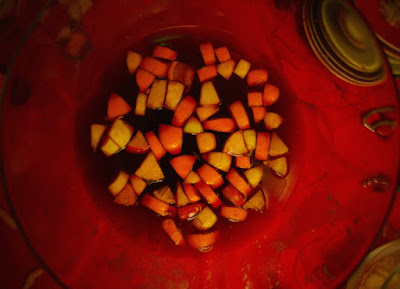 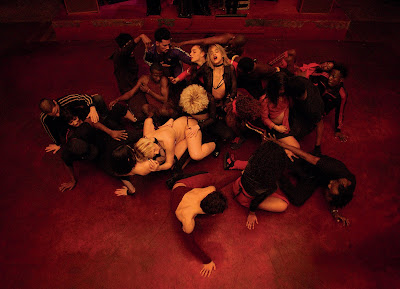 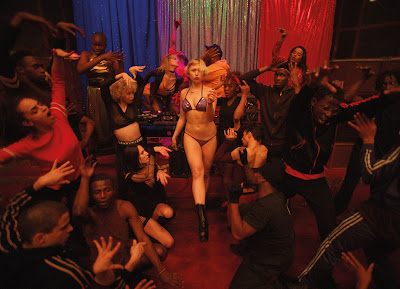 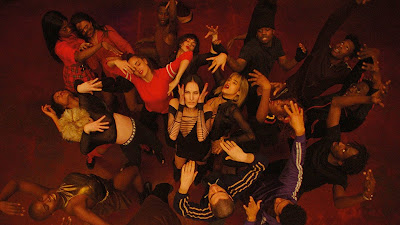 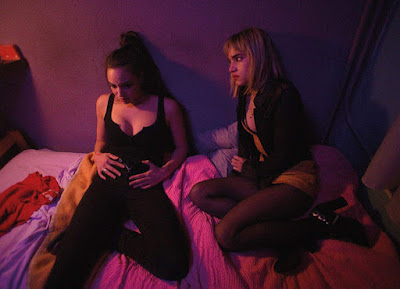 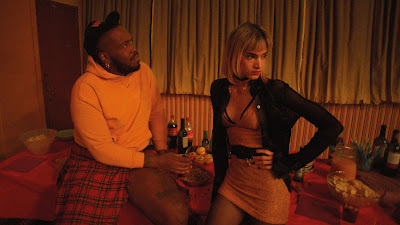 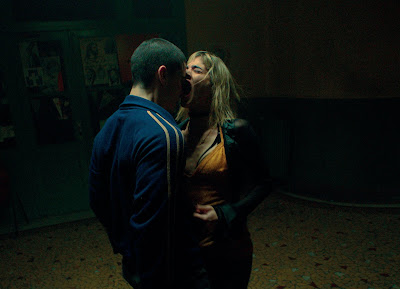 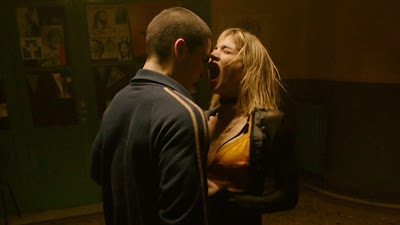 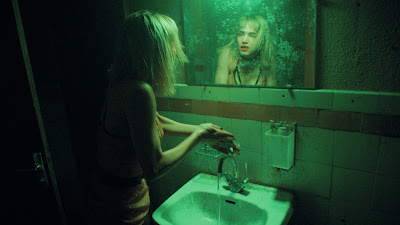 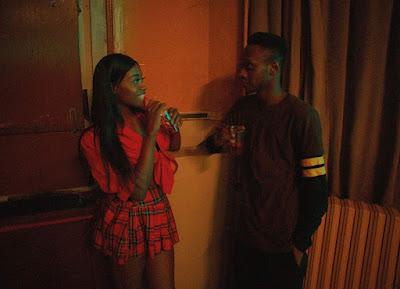 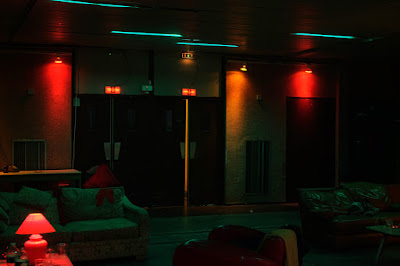 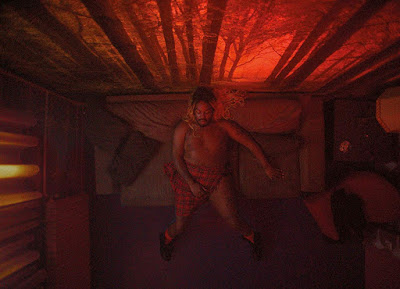 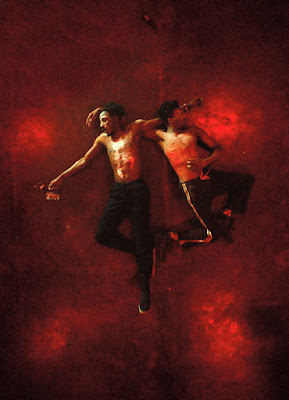 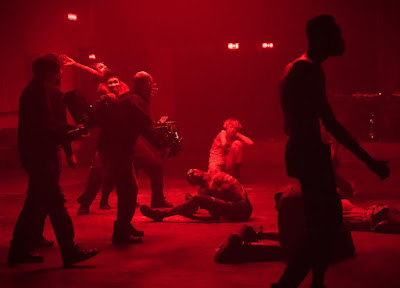 Director Gaspar Noé on the set 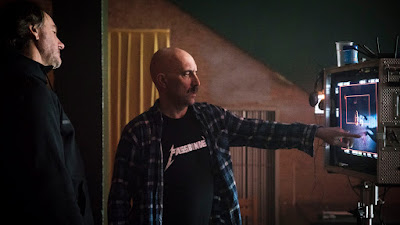 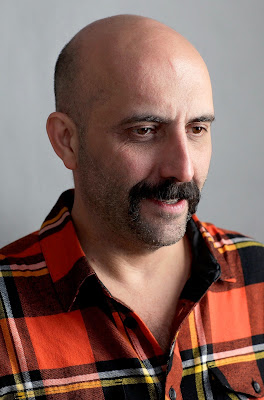 It seems this director of extreme cinema is always trying to top his previous effort, growing more and more visually outlandish to provoke audience reactions, yet this one is another major let-down, so much so that one wonders why his films even get invited to Cannes anymore, though not screened in competition as it premiered in Director’s Fortnight, where the film was largely embraced by the critical inner circle at Cannes, winning an Art Cinema Award.  Most will likely hold a different view, showing more of a crude sadistic streak than ever, as it’s a film that may be visually stunning, yet veers into chaos and utter annihilation, turning the film into an extended death wish fantasy.  Working primarily without a script, this is basically a psychedelic horror dance fantasia, with the closing credits opening the movie, where the grind of the amped up electronic dance music plays continuously throughout, reflecting the raw energy of disaffected Parisian youth, yet the mood shifts from an initial celebratory euphoria to a horror filled, nightmarish, out of control world that descends into utter havoc, misery, and death.  The premise is simple, as a group of about 20 racially diverse dancers get together at an empty school for a rehearsal, creating a burst of spontaneous energy in a mesmerizing dance collective shot by the director himself in a hypnotic, free-wheeling style that accentuates body movement through a liberated physicality and open expression, breaking off afterwards into an after-party atmosphere, where routine gossip and talk of the men wanting to get into the pants of every girl is a staple of conversation, yet small talk quickly shifts to something else when the entire dance troupe has been affected by what could be an LSD-laced sangria (we never find out for sure) that everyone has been drinking, growing more and more disorienting, where a fear of the unknown turns into an open revolt, turning against one another in a nihilistic gesture of hatred and group stupidity, provoking mind-numbing violence, some of it self-inflicted, urged on by the collective mania, veering into disturbing territory that is difficult to watch.  While Irreversible (Irréversible) (2002) remains this director’s most successful work (arguably his one and only masterpiece), opening in the menacing atmosphere of the most darkened regions of hell, yet the backwards chronology of that film turns what would otherwise be viewed as a nihilistic, exploitive, and highly pessimistic film into one that at least allows for the possibility of hope, offering a new beginning at the end.  This film does just the opposite, taking what amounts to a bounding level of optimism that soon spirals out of control, becoming a drug-induced psychedelic nightmare scenario that descends into wall-to-wall psychotic deliriums of hell, aggressive and hyper-violent, with pulsing techno music evolving into incoherent and rambling hallucinations, where unless you exit the theater viewers can’t escape the psychological onslaught of unending pain and anguish, as the escalating claustrophobic horror show never ends.

A few members of this collective do stand out momentarily, though there’s not even the barest outline of a story, and even less character development, making this more of an abstract expression of dire straits, suggesting we’re engulfed in a nightmarish scenario, as suggested by a bookended prelude and postscript in the wintry snow that alerts viewers to an underlying theme of ultimate doom.  While the spotlight briefly shifts from one to another, at least initially it shines on Sofia Boutella, an Algerian model, dancer (backup for Madonna, Michael Jackson, and Rihanna), and the lone professional actress, appearing more than a decade ago in the Bianca Li French hip-hop movie DANCE CHALLENGE (2002), featured here as Selva interviewing prospective dancers to form the troupe, who are videotaped in an old school VHS style, though the framing background material provides relevant clues, as these are the books and films that have inspired Gaspar Noé, an Argentinean director now living in France, where the listed titles are obvious influences, scrutinized more thoroughly by the director himself in this article, Gaspar Noé on the Easter eggs hidden in plain sight in Climax - Polygon.  After an exhilarating dance sequence that screams empowerment and racial diversity, exhibiting a form of street dance known as Krumping, all the dancers are featured at some point, all collaborating in unison, as if in one voice, creating the illusion of collective harmony, as afterwards this is quickly broken down into accusers and backstabbers, targeting one another with negligible evidence, yet a lynch mob mentality takes over, where the power of the group to incite violence becomes clear.  Selva is one of the first to realize something is wrong, feeling disoriented, questioning what’s going on, initially thinking it’s just her before we realize the entire group has been affected.  As we’re witness to braggadocio male sex talk, attempted hook-ups and sexual trysts, and just general gossip, behavior turns more bizarre, especially when they start turning on one another, singling people out, inflicting a mob mentality on innocent people, and inciting a reckless violence.  As the evening progresses, it only gets worse, venturing into criminal behavior, where primal instincts kick in, as if driven by Charles Manson-style Satanic impulses.  Now this is hardly the trippy chemical reaction that most people experience on LSD, yet Noé insists upon changing the rules, altering the altered reality, implementing fascist tendencies, where sadistic inclinations take over and individuals cowering in fear are powerless to respond, manipulated by sheer force, leaving the dance floor shredded as a new-age battleground of depravity and death.  As a vision of hell on earth, Noé challenges anyone to remain unmoved or neutral, as it’s all designed to provoke a reaction of revulsion, literally turning the camera upside down at one point, losing all familiarity with being human, becoming floating apparitions that already resemble dead souls, no longer fixed to the earth, morphing into one incredibly demented paranoid vision.

While there will be those who love the thrill of how this is filmed, creating a hyper visual psychedelic extravaganza, featuring virtuoso cinematographer Benoît Debie who keeps the film immersed in neon-lit fluorescent colors, yet the underlying tone throughout accentuates such crude base impulses, where the Greek theater chorus urges one fellow dancer to stab herself, or commit suicide, ganging up on another, literally beating him unconscious, threatening to castrate him, turning on a dime against yet another, accusing him of spiking the drinks, throwing him out into the freezing cold and locking him out, with no thought whatsoever for his welfare.  What they do to a young kid is utterly deplorable, yet there it is becoming the substance of yet another Gaspar Noé film, where it’s a depiction of humanity that at its core is base and repulsive.  Does this film in any way offer insight into the current human condition, or is the director instead obsessed with his own deeply disturbed and utterly grotesque pessimism, where in his view society is retreating to its most primal Neanderthal instincts, where this director has simply thrown away the key and eliminated all hope, leaving us to wallow in our own prehistoric misery.  Not sure what the value is of experiencing something so senselessly horrifying that is utterly inescapable.  Not a single member of the entire collective turns out to be helpful, all are greedy, self-centered or lustful, thinking only of themselves at every turn, where it’s literally impossible to relate to any of them, as each is caught up in their own myopic short-sightedness.  While the film feels contemporary, it’s actually set in the early 90’s, apparently so no one could use their cellphones to call for help.  In this ridiculously imposed mindset, it’s as if all phones had been eradicated from the earth, so they were forced to endure a No Exit dilemma where there is simply no escape.  The heavy handed nature of oppressive hopelessness hangs like a lingering cloud over every aspect of this film, where it simply doesn’t represent anything we know about the world, as we’re not this helplessly isolated and disconnected, stuck all alone in a house of horrors, unable to communicate with the outside world.  Assuming this is an allegory for today’s unflinching political pessimism, caught up in extreme nationalistic fervor, there are democracies around the world (including France, where Noé works and resides) where a majority vote can change the outcome and direction of the entire country.  Noé isn’t stuck under the thumb of an authoritarian dictatorship (where his family fled the right-wing Argentinean coup in 1976), nor is he mired in social deprivation where the cycle of poverty is generational and seemingly neverending, so these are not the people he’s speaking for.  His voice is his alone, believing the world has become too moralistic, which makes this grotesque vision of death and hopelessness even more pathetic and less relevant, where the amount of cruelty on display is stunning.  “Death is an extraordinary experience,” he highlights, as if that’s something to aspire to.
Posted by Robert Kennedy at 12:07 AM