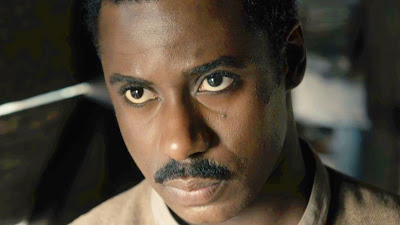 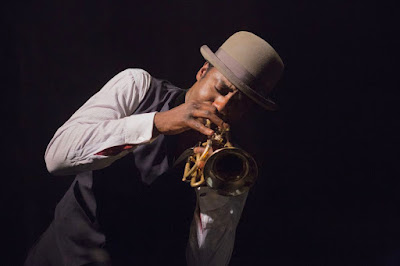 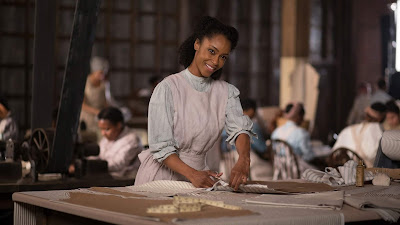 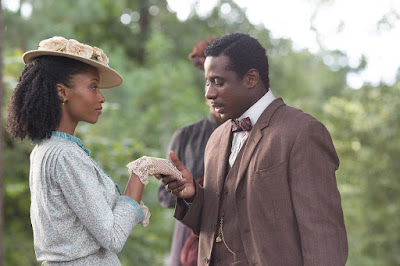 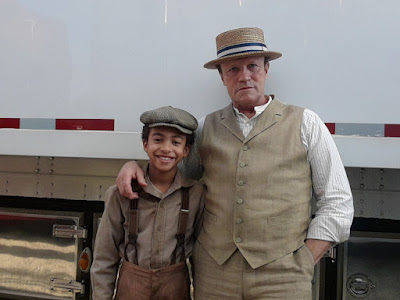 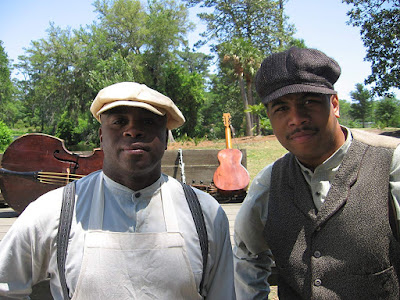 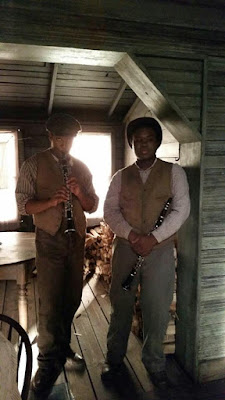 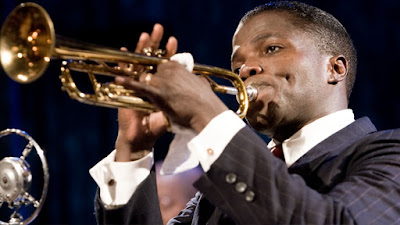 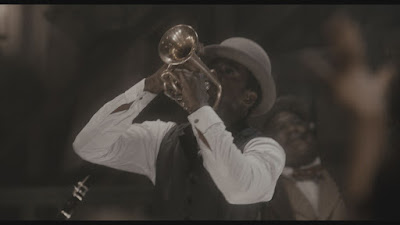 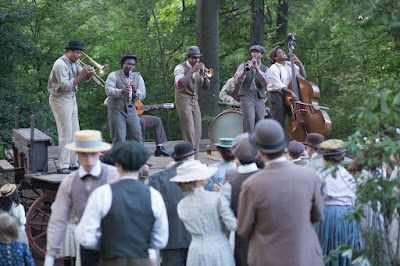 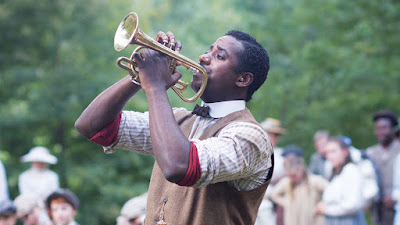 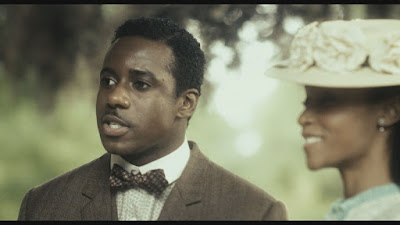 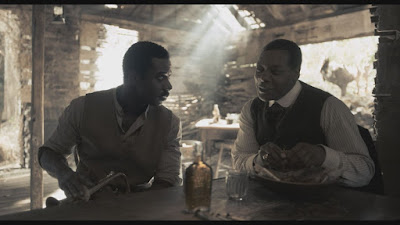 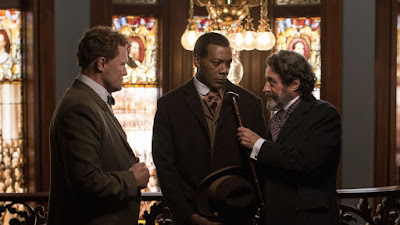 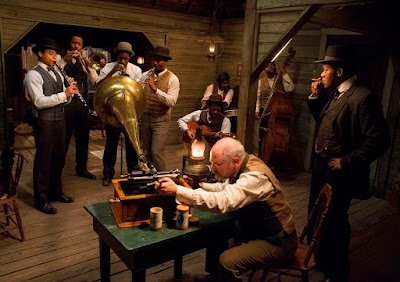 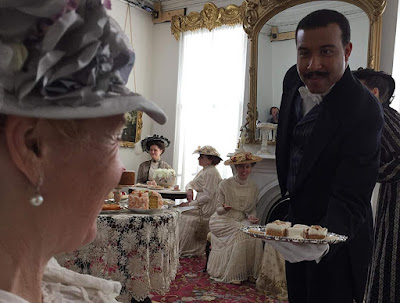 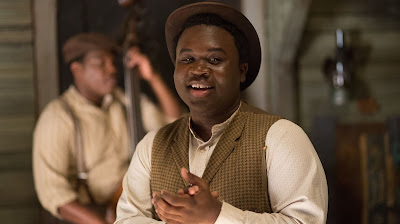 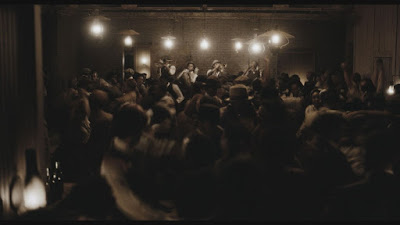 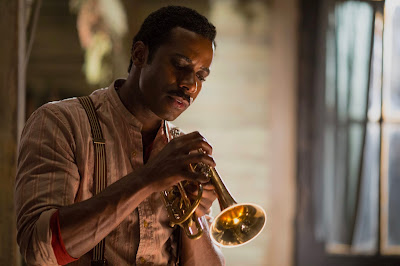 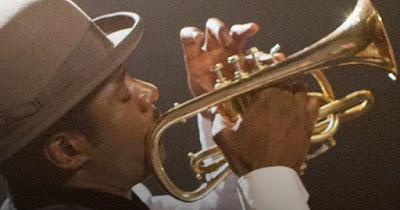 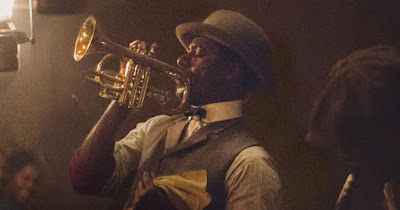 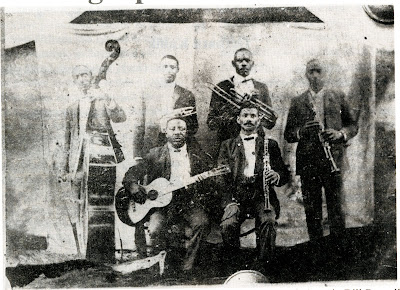 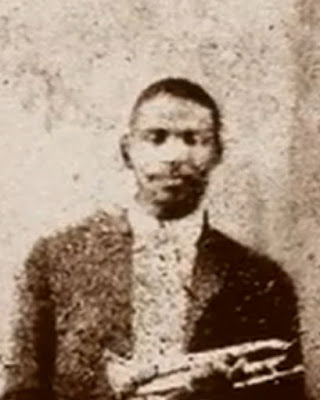 In the making for well over a decade, starting the shoot with Anthony Mackie in the lead role, but those initial plans were scrapped in an attempt to shoot a film in the same freewheeling manner as one plays jazz music, but the result is a disaster, as the end product is brutally amateurish, poorly written, edited, and directed, where no performances stand out, instead this is a muddled conglomeration bordering on a mess about one of America’s great original artists, New Orleans’ jazz pioneer Buddy Bolden, uniquely attributed as the originator of American jazz, “the most powerful trumpet player I’ve ever heard, or ever was known,” according to Jelly Roll Morton on an Alan Lomax Library of Congress recording, though very little is known about him, actually playing the cornet, remaining a mythological figure in history who spent the last 24 years of his life confined to a Louisiana State Mental Hospital with no visits from musicians or historical archivists.  His institutionalization occurred 10 years before the first jazz recording was made in 1917.  While jazz did not originate from a single individual, the early New Orleans pioneers that played with Bolden in the late 1890’s, King Oliver and Bunk Johnson, who later mentored Louis Armstrong, all attribute Bolden as the leading figure, with clarinetist Alphonse Picou proclaiming, “He was the loudest there ever was because you could hear Buddy’s cornet as loud as what Louis Armstrong played through the mike, ” while Bunk Johnson claimed Bolden was “a good-looking brown-skinned man, tall and slim and a terror with the ladies.”  Jelly Roll Morton often claimed he invented jazz, but he came “after” Bolden and would have been only ten-years old during Bolden’s era, though Morton was the first jazz composer, as he was the first to write down his jazz arrangements, with many of his compositions becoming jazz staples.  The best place to start may be the impressionistic stream-of-conscience novel Coming Through Slaughter by Michael Ondaatje, his first published work in 1976, which is not so much an accurate depiction of Bolden’s life, but a poetic rendering of his improvisational attitude, revealing there are no known recordings of his playing, but there is an audio recording of trumpet player Bunk Johnson whistling in the style of Bolden.  The definitive book on Bolden remains In Search of Buddy Bolden by Donald Marquis in 1978, the result of more than a decade of painstaking research, a landmark work of scholarship and a seminal work in jazz history.  This film pales in comparison, with little redeeming value.

The problem here is not the story, but the director and storyteller, an overprivileged white man who inherited billions from his father who made his fortune founding the Hyatt hotel chain, where Pritzger, the director and co-writer, is among the top 400 richest Americans, hardly a man with insight into Buddy Bolden’s circumstances growing up black and poor around the turn of the century, throwing in $30 million dollars of his own money to make the picture.  This is precisely the problem in Hollywood, as the wrong people are assigned to the majority of the stories, basically preventing someone better qualified for the job, where the final product has no earthly connection to the source material, but is a non-linear, disjointed, and surreal mess that is largely incoherent, including blatantly sexist and sadistically demeaning racist material, something no black director would include but whites have no problem with, as they’re not really savvy about the racial implications of depicting so much white hatred onscreen, as it’s overly heavy handed, literally pummeling viewers, rubbing their faces in the stench, more of a figment of the director’s imagination, turning this into a white man’s fantasy, which isn’t remotely as interesting, bringing little original thought to the material, where most of the spoken material was recorded so poorly that it sounds garbled, losing any hope of connecting this story to a wider audience, where Buddy Bolden deserved better.  Making no attempt to connect Bolden’s music to the black church, where it was spawned, or to funerals, with second liners marching with the coffin in a spirited public musical procession, with parades incorporated into the musical history of New Orleans, instead Pritzger presents Bolden (played by Gary Carr) not as an innovator or an experimenter but as a finished product, as the baddest dude on the block who could outplay anyone else, standing down all opposition, like testosterone-filled freestyle battle rappers or poetry slammers, which may very well have been true, but this is presented with a 21st century mentality, as if Bolden was a god, worshipped in his neighborhood, where every dance step is fully choreographed, every woman a man’s dream, everybody in perfect sync and harmony, bearing no resemblance to gritty backstreet dance halls, where Bolden played in the black prostitution district known as Back o’ Town, getting down and dirty, as opposed to Storyville which was frequented by whites, yet this is clearly a white guy trying to imagine himself being black, with all the perfections and idealizations of the white world, which were nonexistent in Bolden’s segregated life where Jim Crow ruled supreme.  Nicknamed King Bolden, his band packed the halls on sweltering Saturday nights, as churches turned into dance halls after Sunday morning services, becoming so rank and funky that they had to push open the windows to let the foul air out.  There’s no hint of that in Pritzger’s film, filled instead with quick cuts and jagged edges, where even the music (played by Wynton Marsalis) comes in short bursts and is continually edited and interrupted, never establishing that free flow of spontaneity that his genius was all about.

Granted, there is a single scene that shows creative thought, with Bolden as a young boy lying on the ground in the garment factory where his mother worked, where in his mind all the factory sounds are heard in rhythm, literally orchestrating music in his imagination.  But more importantly, much of this film seems to take place in the darkened corridors of the mental asylum where Bolden languished endlessly for years, most likely in a vegetative state due to the primitive conditions of the time, yet Pritzger’s film imagines what he might have been thinking, piecing together fragmented memories, mostly told in bizarre, abruptly occurring flashbacks that jump around in no apparent order, creating an emotional disconnect with deliriously violent overtones, using far too many Battle Royale boxing scenes, with white promoters using extraordinarily large black men for public spectacle, analogous to slave auctions, watching them beat each other to death, where black men getting pulverized in the ring is geared towards white entertainment, with these imaginings presented as if he was still capable of coherent thought.  Louis Armstrong made a radio appearance just 5 months before Bolden’s death, the first time a black musician spoke on the radio, where Pritzger gets the bright idea to have Bolden hear in the asylum what is essentially his own music, but played by someone else, as if this would revitalize the man from a catatonic state, making him see the light.  Instead he creates a mish mosh of splintered recollections, trying to piece together a story, where confusion and degradation is all that really comes across from the screen.  When they attempt to show his mental breakdown, everything is over-exaggerated, sentimentalized and melodramatic, reduced to pitiful suffering, losing his ability to play, unable to face the crowds, instead lying in bed all day and wallowing in a state of depression, growing paranoid that others would steal his music, which is one reason he refused to write it down (the other is he couldn’t read music), but inevitably they throw in the pathetic stereotypical evils of heroin and heavy narcotics (seemingly a requirement in Hollywood depictions of people of color), as if drugs rattled his already embattled mind (more likely it was cheap alcohol), having REQUIEM FOR A DREAM (2000) hallucinogenic nightmares, sending him into schizophrenic fits of delusions, losing all contact with reality, where his worst fears are realized, as others are playing his music in the same clubs he used to play, before the same audiences, yet no one attributes the music to him, and he’s not seeing a dime, languishing in anonymity where he no longer recognizes himself.  The film is not so much a celebration of his life as an impressionistic mosaic of his nightmarish demise, like a descent into hell, from which there is no return.  It’s a tragic downfall, considering the heights he achieved, believing he was making “church music better,” taking it to another level, mixing ragtime with the blues, adding soaring gospel riffs, where according to the director, “his use of syncopation (landing hard on the fourth beat), flatting the third note of the scale (common in blues music) shows he operated differently than other horn players of the time.”  The only known photo of him was taken with his band in 1905.
Posted by Robert Kennedy at 12:02 AM