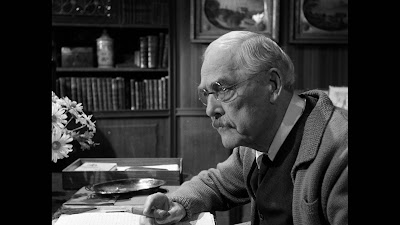 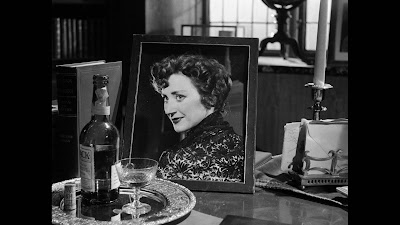 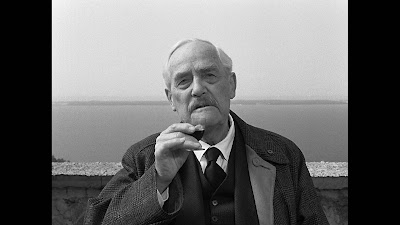 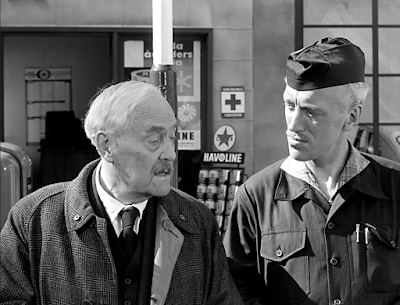 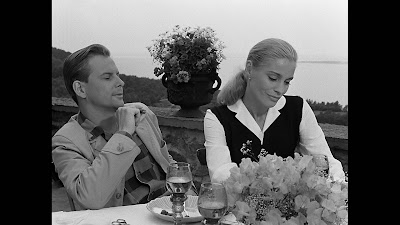 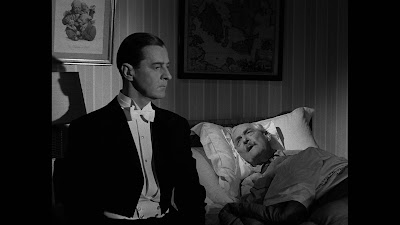 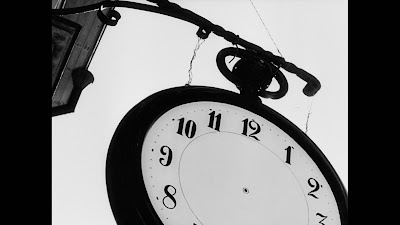 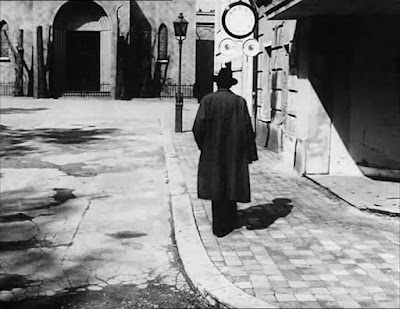 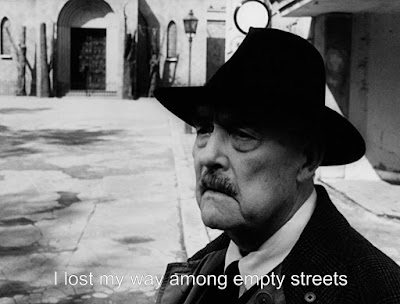 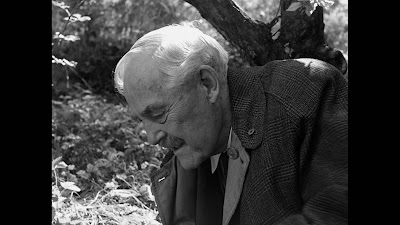 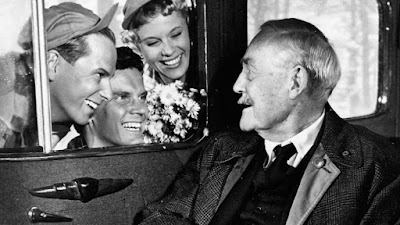 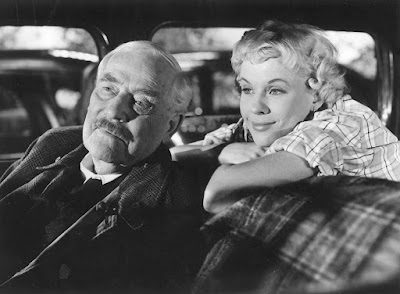 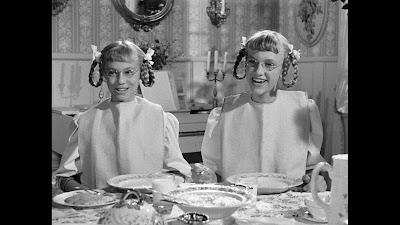 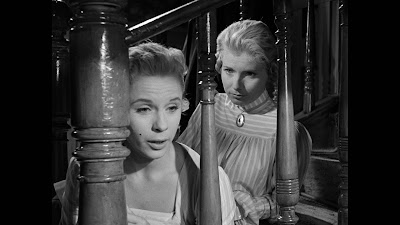 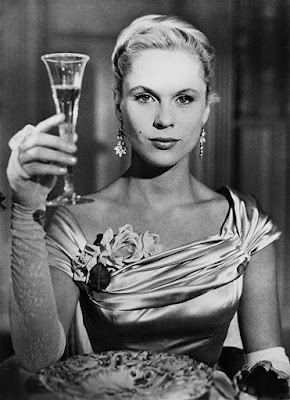 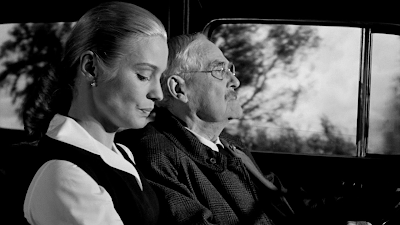 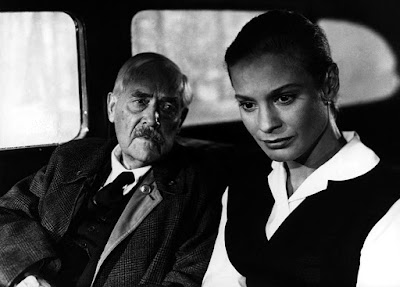 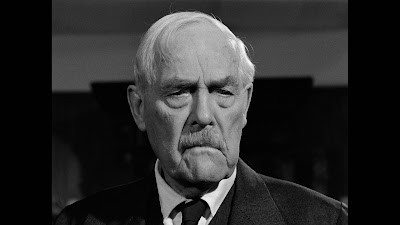 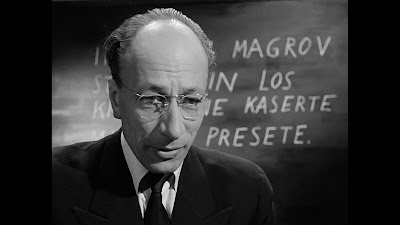 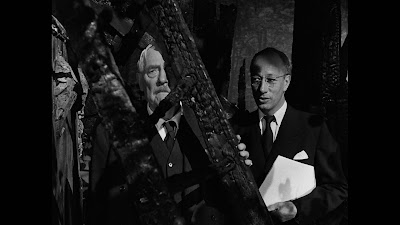 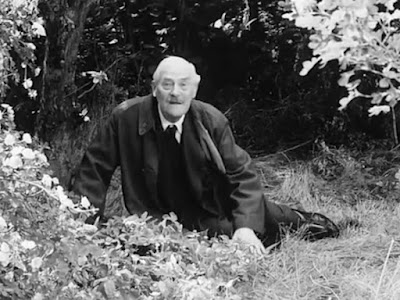 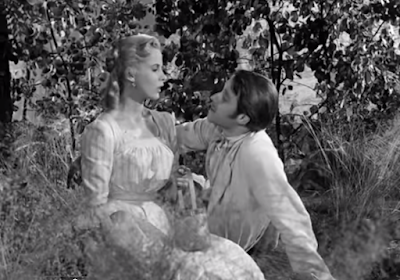 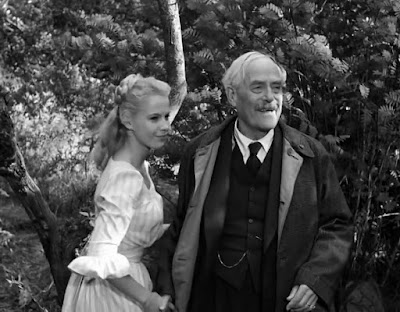 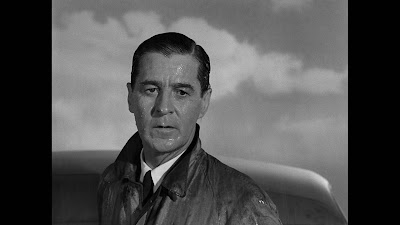 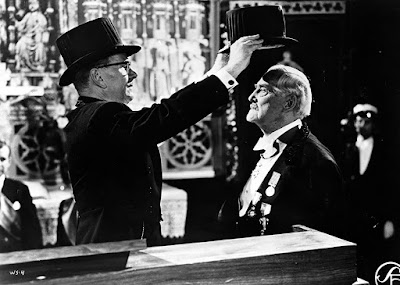 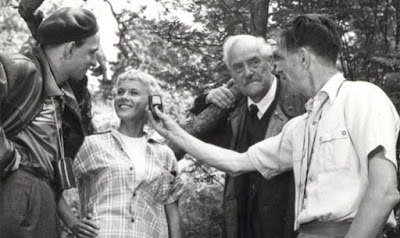 (Left to right) Bergman on the set with Bibi Andersson, Victor Sjöström, and Gunnar Fischer 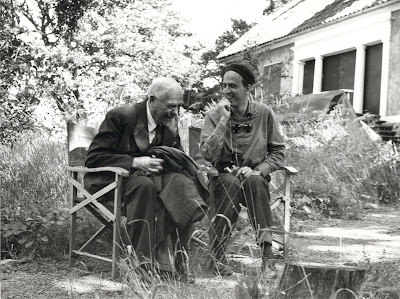 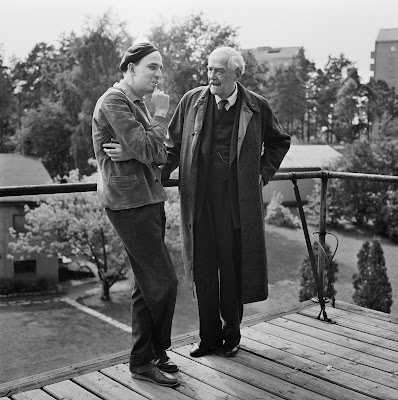 Where is the friend I seek at break of day?
When night falls I still have not found Him.
My burning heart shows me His traces
I see His traces wherever flowers bloom
His love is mingled with every air.
­—Old Swedish poem

A novel approach to a road movie, using an unusual cast of characters that all somehow blend together to create a fascinating portrait of a day in the life of an aging man, Dr. Isak Borg, perfectly embodied by Victor Sjöström (in real life, the so-called founder of Swedish cinema), who’s being honored by his alma mater after providing 50 years of distinguished service in the medical profession.  While the film is parodied for black comedy in the 14-minute short, George Coe and Anthony Lover’s De Düva, In 1968, this Bergman parody was up for Best Short at the Oscars. (14:00), it’s easy to see why, as the 78-year old Professor Borg, while compiling his memoirs, is taunted and humiliated by the inner thoughts of his own dreams and memories, which continue to flashback throughout the film.  Rather than serve as a distraction, these are pleasant indicators that remind us all how important seemingly insignificant moments in our lives can be, petty squabbles or jealousies with siblings, that first crush, or deeply humiliating moments that take on different ramifications as we grow older.  Always told with wit and charm, Sjöström’s cantankerous personality and wonderfully captivating performance lead the way with his catnaps and fretful night’s sleep, where his weird dreams seem to dominate his thoughts, opening with a dream image of a giant clock with no hands, as he walks down a mysterious street that is completely empty.  Checking his pocket watch, it also has no hands.  Finally he sees someone waiting on the street with his back turned.  When he turns to see his face, it is a disfigured contortion with no eyes or mouth, a body that crumples to the ground as if dead, with blood streaming down the street.  A horse drawn hearse leads a coffin down the street that mysteriously slips off the cart and lands at the professor’s feet, where a human hand points into the air from the broken coffin, a hand that comes alive and grabs his own, where the face in the coffin is also that of his own, blending the two faces together until he awakens with a jolt.  While this is a particularly picturesque dream, they are all charmingly simple to figure out and are memorable for what they reveal about the true character of the dreamer.  A bit like Persona (1966) without the other woman, this film dissects Professor Borg’s world, allowing alternate realities, daydreams, memories, dreams, suppressed emotions of all kinds to interfere with his life and expose his weaknesses and sensitivities, offering him a different view of himself that he wouldn’t have had if he were not a passenger on this crazy road trip.

Interesting that Bergman was 38 when he made this film, a hauntingly beautiful premonition of himself as an old man, and long before he was married to his last wife Ingrid, who he was married to for 24 years, dying 8 years before he did, but on Borg’s desk is a photo of his deceased wife that bears a striking resemblance to Bergman’s wife Ingrid.  One also must make mention of Jullan Kendahl, Borg’s live-in homemaker Agda, who has been with him for something like forty years, who is rudely awoken by the professor at the crack of dawn and shows the good sense to go right back to bed.  But she’s pestered by the old man, which sets the stage for a long running relationship built on wise cracks and his general contentious disposition.   Needless to say, the lurid nature of the dream alters the old man’s plans at the last moment and he decides to drive a car instead of fly to the ceremony, with or without Agda who sticks with the original plan.  Daughter-in-law Marianne (Ingrid Thulin) is also wakened by the fracas and agrees to drive with the Professor, as she could surprise her husband at the ceremony.  No sooner do they get on the road that the Professor falls into a short slumber and in a daydream, peers into earlier memories as they’re taking place, like an outside observer, moving from the present to the past and back again seemingly with ease, recalling events that happened at his family’s summer home during his childhood that become vividly real, the consequences of which, especially the lost opportunities, continue to nag at him to this day.   Along the way, he decides to take a short detour to visit his 96-year old mother, a cold and disaffected woman whose icy nature has probably fought off death over the years.  Marianne silently observes their dutiful but completely unaffectionate visit, which reminds her of the marital indifference shown to her by her own husband.

Changing the focus, the film instead veers into a completely different direction, picking up a series of charming hitchhikers.  One, Bibi Andersson, whose effervescent personality gives this film a shot of needed adrenaline, has the same name as and plays the dual role of Borg’s young fiancé in his faraway youth, a girl who was similarly faced with the same dilemma about which boy to choose.  Andersson is accompanied by two guys, a boyfriend (studying to be a parson) and a chaperone, a believer and a non-believer, who spend the entire film squabbling over the existence of God, which provides amusing comic relief, a far cry from the gloomy, near pretentious seriousness of his previous film, The Seventh Seal (Det sjunde inseglet) (1957).  In fact, this film’s glorification of life proves to be an antidote to the oppressive view of death lurking everywhere throughout that earlier film.  Instead WILD STRAWBERRIES is a gentle stroll down memory lane with a cast of comical characters to enliven one’s journey.  The three kids are charmingly seductive, the personification of youth with all their awkward unknowns, set against the surprisingly unsettled nature of the Professor who’s lost his bearings, feeling a bit more anxious the further along the road he travels.

They have a brief encounter with a wretchedly unhappy married couple, meeting them under accidental circumstances, where the entire group is traveling together for a short duration having to listen to the back and forth snide remarks between them becoming ever more crude and hurtful until eventually Marianne simply kicks them out and drives on without them.  They seem to represent the extreme of a marriage gone wrong, which unfortunately reminds the Professor of his own guilt-ridden marriage, where in yet another dream sequence, he recalls his wife’s fury at his measured impassivity when she informs him of an affair, which still has lingering aftereffects of powerlessness and self pity, as he even conjures up humiliating images of flunking a medical exam that he’s never taken.  Soon, however, the kids learn of the reason behind the Professor’s journey, becoming overtly congratulatory, basically making a fuss over him all of a sudden, to his absolute delight.  The seamless editing, moving back and forth in time, always providing fresh insight into the present, is simply remarkable.  And there’s nothing in Sjöström’s performance that ever suggests he’s acting.

But just before that transition, the Professor awakes at a stop where the kids are taking a break outside the car, where Marianne decides to tell the Professor the real problem behind her marital difficulties, the reason she left him temporarily and came to visit the Professor, as her husband didn’t want a child, even after learning she was pregnant.  The full weight of this stark emotional bomb comes out of nowhere and contrasts against anything else in the film, as the power of her predicament is devastatingly real and suddenly becomes the new focus of the film, especially after she compares her relationship to the icy austerity between the Professor and his mother, afraid this could happen to her.  By the time the trumpets sound at the university and the pomp and circumstance are in full regalia, beautifully shot, truly transporting us to another world, somehow all this laudatory recognition seems so secondary to what really matters in life.  The title of the film reveals the seasonal nature of life, making reference to Sweden’s short summer seasons, where the bloom of youth, unfettered by responsibilities, ends all too soon.  In this film that moves so easily between the interchangability of dreams and reality, much of what we see is open to interpretation, revealing later connections or understandings that may have gone unnoticed earlier in our lives, challenging what we believe we know, what our thoughts of love really are, what our life is worth, perhaps altering those perceptions as time passes.   As the Professor’s reverie reunites him with the pastoral perfection of his youth, we realize that in the blink of an eye our reflections could so easily reach a differing outcome.
Posted by Robert Kennedy at 12:02 AM