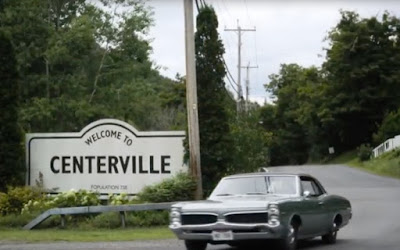 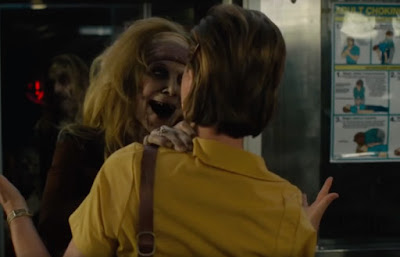 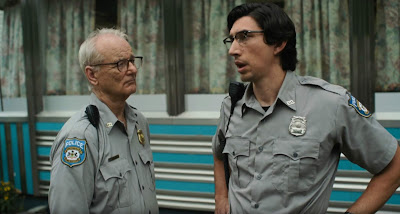 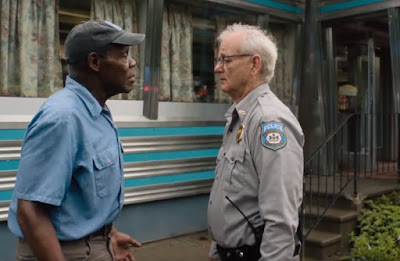 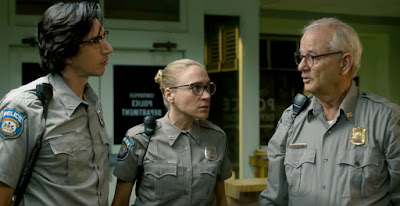 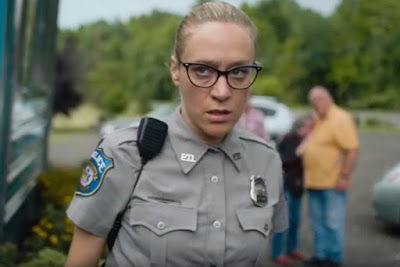 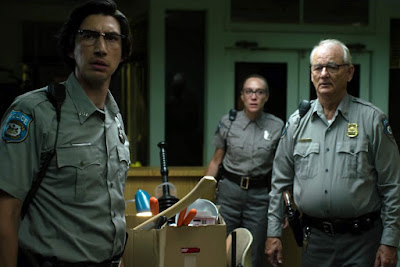 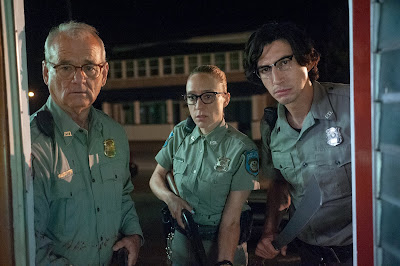 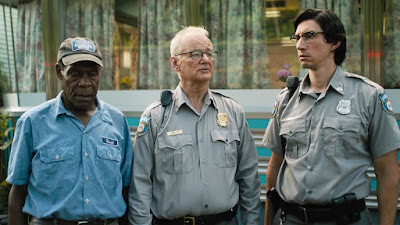 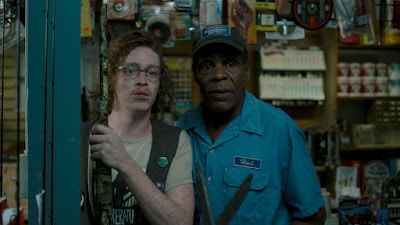 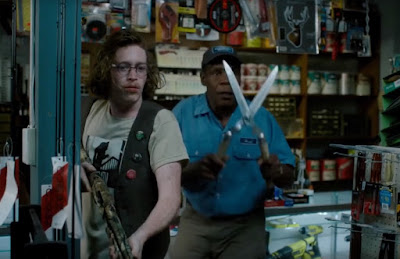 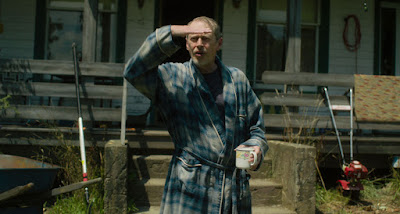 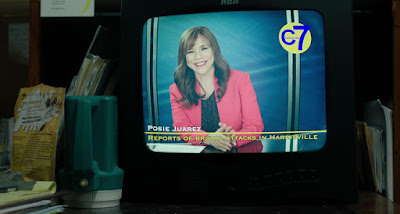 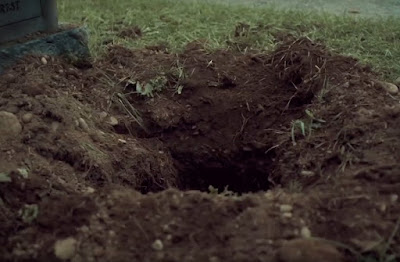 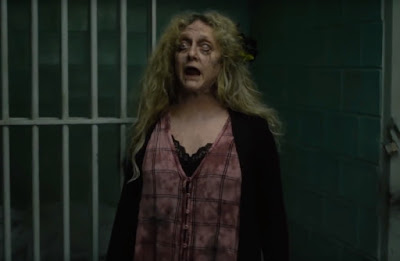 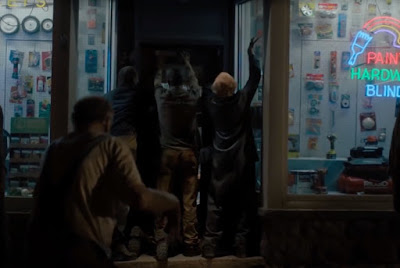 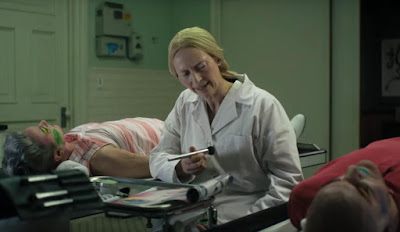 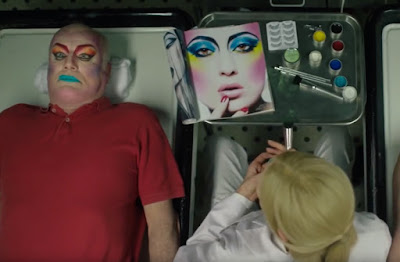 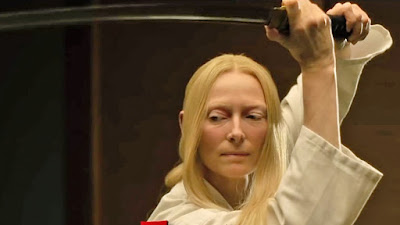 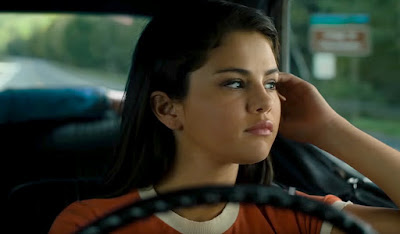 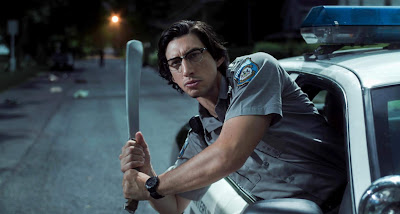 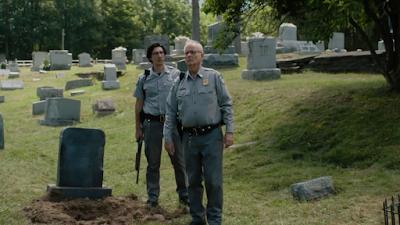 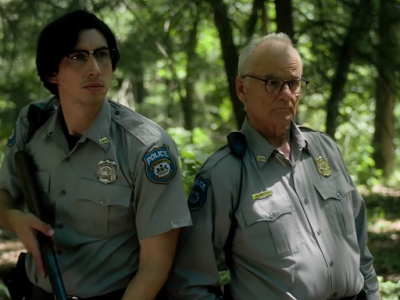 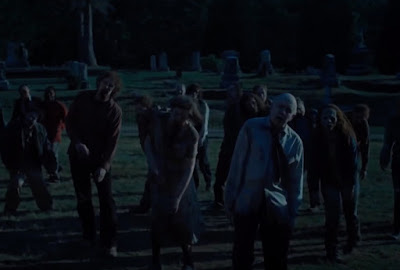 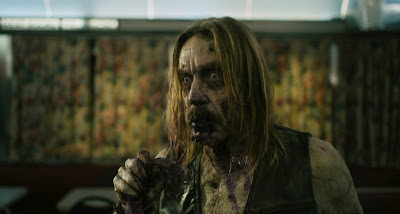 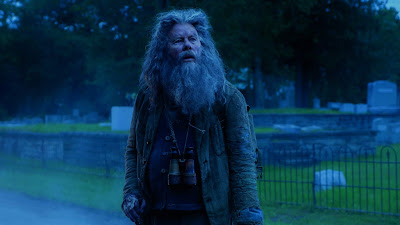 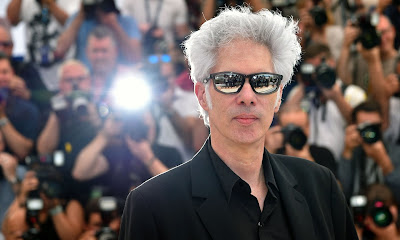 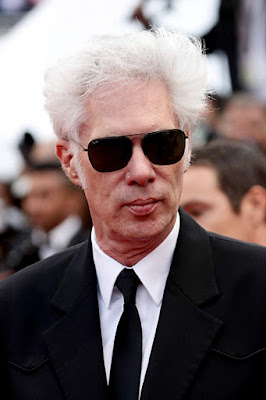 Kind of a cheesy and lightweight comedic genre film by this director that somehow got selected to open the Cannes Film Festival, receiving less than stellar reviews, surviving apparently on the fumes of this director’s reputation, though it has a remarkable all-star cast.  It’s not a particularly good zombie flick, but it distinguishes itself by being reverential to the masters of the genre, where snide and sarcastic references to George Romero’s subversive commentary run throughout the film, but there’s very little actual story.  Instead it’s more of a mood piece that uses apocalyptic zombie references to comment on oversaturated consumer culture, with individuals spending all their time on self-centered social media, where their smartphones are literally attached to their bodies, inseparable, doing all the heavy lifting that their brains used to do, rendering mankind into a brainless state of confusion completely reliant upon their electronic gadgetry to survive, without which they have no significant life to speak of.  This comment on passivity may be the key to the film, as too much of it lends itself to overly dire circumstances, suggesting a certain fatalism (like the current state of our nation), where we begin to resemble the walking dead.  Jarmusch already made a vampire flick, Only Lovers Left Alive (2013), a gangster flick, GHOST DOG: THE WAY OF THE SAMURAI (1999), and a western, Dead Man (1995), so he’s tinkered with genre films before, but this is easily his least effective as it barely scratches the surface.  In typical Jarmusch style, however, the film is so deadpan that the characters themselves barely come alive throughout the film, which may itself be a commentary on the state of our lives, where the high point may be a mysterious conversation that makes mocking, self-reverential humor about the director himself, which is completely out of character from the rest of the film, or even this director’s career, with Bill Murray as himself calling him “a dick” at one point after he feels slighted by what he perceives as unequal treatment, offering behind-the-scenes insight into the personal relationships, which is amusing, but it can’t save this film from its startling deficiencies, where many may find this a complete waste of time.  It does, however, have its own theme song, Sturgill Simpson - The Dead Don't Die [Official Video] - YouTube (3:51), heard on the radio by two cops making their rounds, Chief Cliff Robertson (Bill Murray) and his partner Ronnie Peterson (Adam Driver), where the chief thinks it sounds very familiar, only to be told by his partner that “it’s the theme song,” where everyone in the film feels a connection to the song, as if they’ve all heard it before, giving the film a déjà vu theme.  Set in the tiny Pennsylvania town of Centerville (from Frank Zappa’s 1971 surreal mockumentary 200 MOTELS), population 738, described as “a real nice place” on the sign driving in, while Zappa’s film describes the town as “a real nice place to raise your kids up.”  When it doesn’t get dark at night despite the lateness of the time, with watches and cellphones all going dead, there are signs of an impending apocalypse, though few are capable of anticipating the enormity of the situation, despite calamitous warnings from newscaster Posie Juarez (Rosie Perez) that no one takes seriously, as who really believes in a zombie infestation?

When half-eaten bodies are discovered laying in their own blood on the floor of the diner the next morning, the chief knows something is up, but it takes Ronnie to figure it out for him, as all signs point to zombies, the undead, ghouls.  Meanwhile, a local gas station run by Bobby Wiggins (Caleb Landry Jones) is also a haven for the occult and all things weird and strange, selling vintage comic books and horror paraphernalia, where he’s also an expert on how to deal with the undead.  It’s surprising that in times of real apocalyptic need, it’s the fringe characters that know how to survive, as the rest are overly predictable conformists who refuse to believe this day is any different than any other.  This film is more about cameo appearances than storyline, where there’s a certain delight in who shows up next.  Rounding out the police crew is the straight-laced Mindy Morrison (Chloë Sevigny), who’s a bit freaked out by what she sees, serving the role of the screamer when the time is right.  While there’s never any real accumulation of suspense, the first zombies we’re introduced to happen to be Iggy Pop and Sara Driver, Jarmusch’s longtime companion rarely ever appearing in his films, not since MYSTERY TRAIN (1989).  They also happen to be caffeine addicts, where we learn zombies return back to what they liked best about the living, mumbling out a desire for “coffee,” with Carol Kane making an appearance as an undead with a thirst for “chardonnay,” or Sturgill Simpson has a hankering for a “guitar,” while others cry out for “Xanax” or “Wi-Fi,” carrying iPhones that are mysteriously charged even though no one else can get a signal.  When a group of unsuspecting kids driving on the road head into town to fill up on gas, Zoe (Selena Gomez), Zach (Luka Sabbat) and Jack (Austin Butler), described by locals as hipsters from the city, they happen to be driving a Pontiac LeMans, the same vehicle featured in Romero’s THE NIGHT OF THE LIVING DEAD (1968).  Meanwhile there’s a group of teenagers housed at the Juvenile detention center, Maya Delmont as Stella, Taliyah Whitaker as Olivia, and Jahi Winston as Geronimo, with the running gag being these big beefy security guards continually remove Geronimo from the women’s quarters as a violation of rules, as the three of them are inseparable and continue to hang out together.  Glued to the television news reports, their astute commentary is among the more intelligent in the film, completely unrecognized by anyone else, apparently, though they have the wherewithal to survive in the end when everyone else fails.  The star of the show, however, is none other than Tilda Swinton as Zelda Winston, the funeral home director, who weirdly has her own habits that others find strange (Murray attributes it to her being Scottish), like decorating the corpses in colorful make-up, speaking to them as old friends, like playing with dolls, or always walking in straight lines, or better yet her mysterious samurai sword routine performed before a golden image of Buddha, carrying the sword with her wherever she goes, easily decapitating zombies as she walks down the street unobstructed.  Her fearlessness sets her apart from the rest, easily mingling with the undead, viewing them as little different from the living.

In a film where irony is like a foreign language, accentuated by the music from Jarmusch’s own band Sqürl, what’s clear is no one has a strategy of what to do while under zombie attack, as handling a few is no problem, but handling a surge of relentlessly attacking living corpses feasting on your flesh is another story altogether, as they tend to overpower even those with the best survival instincts, where the best plan seems to be to stay away from them altogether.  Unlike Ruben Fleischer’s ZOMBIELAND (2009), still the most commercially successful zombie flick of all time (a sequel is coming out in the fall), zombies are not used for target practice, or wiped out in record numbers like playing some demolition derby video game.  Instead they become recognizable figures come back to haunt the living, including some of the living characters seen earlier in the film who return later in the swarms of the undead, where it’s hard not to still think of them as human and among the living, plaguing the consciousness of those that knew them.  This is a new twist on a familiar theme, but Jarmusch doesn’t do much with it.  Instead he uses a social misfit narrator to comment on what we’re seeing, Tom Waits as Hermit Bob, a scruffy outsider resembling Bigfoot who’s been living in the woods for decades, becoming a mythical creature, but also an expert on survival.  Watching it all through binoculars safely tucked away behind the trees, he offers a cryptic condemnation of the modern world, revealing a society that “sold its soul for a Gameboy.”  Jarmusch seems to be doing the same, using Steve Buscemi as Farmer Miller, an acknowledged racist wearing a red Trump MAGA hat that instead says “Make America White Again,” as he’s a loathsome and despicable character that no one likes, getting his just due by the end, completely clueless about the undead, where he sees no difference between the living and the dead, hating them all, making vile comments about trespassers on his property while they start eating him alive.  According to the news reports, all of this was caused by the unrestricted access energy companies had to drive exploratory holes into the earth through polar fracking, actually causing a shift of the Earth’s axis, literally altering the world as we know it, opening a Pandora’s Box of mythological plagues and turmoil suddenly unleashed into the world.  In this version, zombies spill burnt ash instead of blood, and must be decapitated to die, craving the blood and flesh of humans for which they have an unquenchable thirst.  While this may attempt to resemble Hitchcock’s The Birds (1963) in terms of a nightmarish doomsday scenario, what’s missing is any element of dread or suspense, or a feeling like zombies are taking over the world.  It never really establishes that kind of momentous impact, feeling more like a bedtime story where it will all be different when we awake, perhaps needing an amusing end coda that never comes, instead leaving viewers sucked into a B-movie end-of-the-world scenario where it all just “ends badly.”
Posted by Robert Kennedy at 12:03 AM