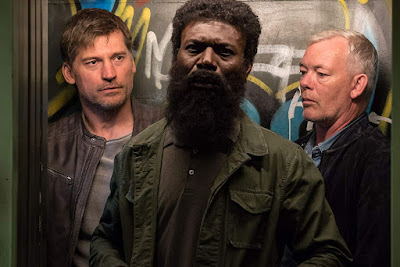 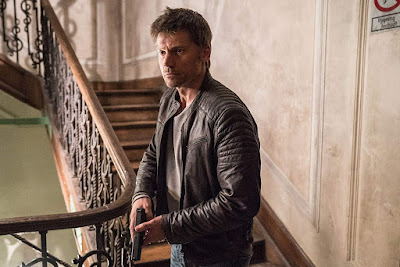 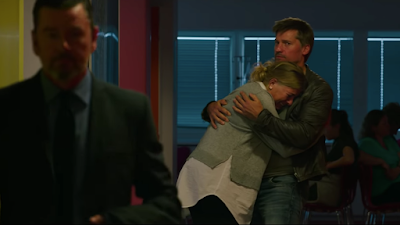 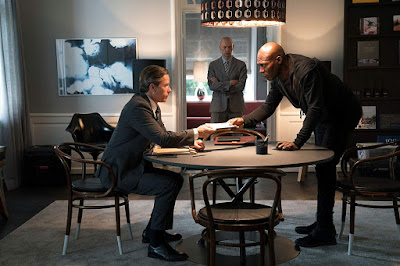 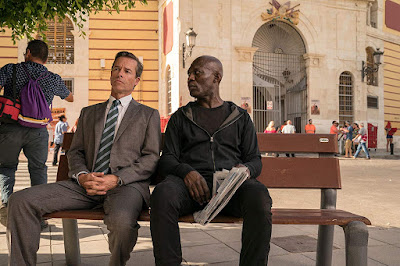 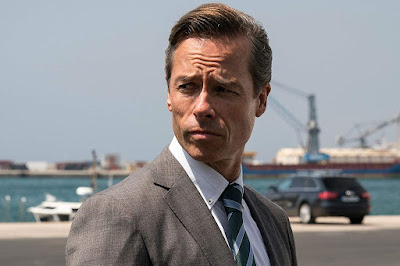 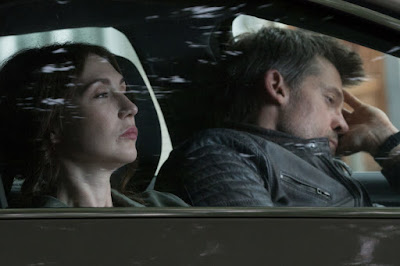 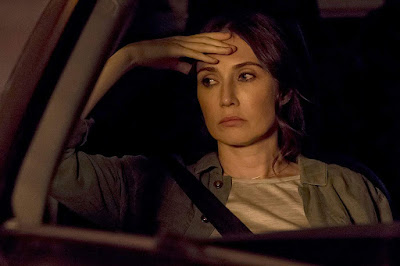 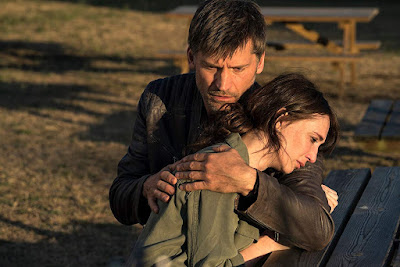 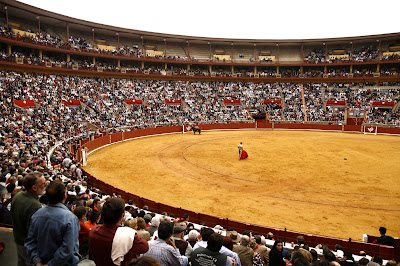 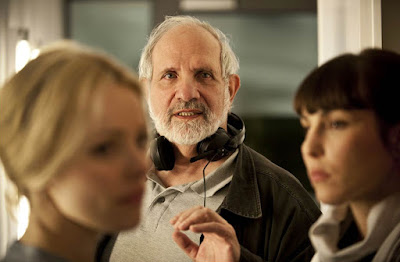 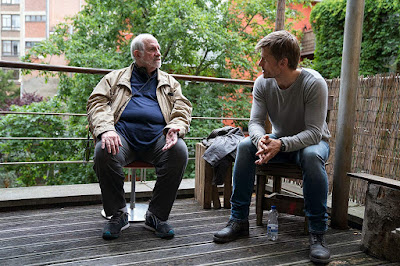 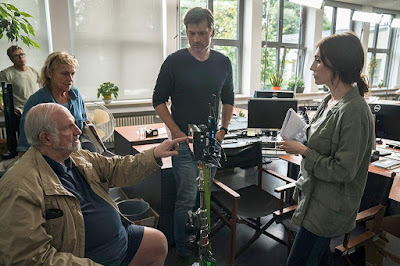 Kind of a throwback film from an earlier era, feeding into the global paranoia about Islamic terrorism, like the cheapo exploitation flicks pumped out by your typical Golan-Globus production, founded by Israeli cousins Menahem Golan and Yoram Globus, which in the mid-80’s were cranking out more than a dozen films per year, coinciding with the VHS boom of the late 70’s and early 80’s, literally packing the shelves of local video stores, when the company had an insatiable appetite for high octane B-movies, where the secret was their embrace of the international market, something Hollywood was slow to comprehend.  Enter Brian de Palma, a shlock movie specialist with an affinity for films from that era, where this is only his second film in more than a decade, seemingly making this film on the fly.  Shot in Spain and Denmark with an international cast and crew, it couldn’t be more confusing, spoken in English instead of Danish, where the sound’s not in synch with the words being spoken, feeling like it was hastily completed.  As it turns out, de Palma had an additional hour that has been excised from the final version, with the release delayed for a year, with the director removed from the final product.  Completely frustrated with the process, de Palma is quoted a year ago as saying, “I had a lot of problems in financing [the film].  I never experienced such a horrible movie set.  A large part of our team has not even been paid yet by the Danish producers.  The film is finished and ready to go out, but I have no idea what its future will hold, it is currently in the hands of the producers.  This was my first experience in Denmark and most likely my last.”  Rife with stereotypes, exactly like all his earlier films, this is not exactly a picture of taste and refinement, using crude exploitive imagery that is not for the meek, revitalizing ISIS beheadings and suicide bombers, creating propaganda imagery as recruiting material, which this film is more than happy to recreate, emulating their style, suggesting de Palma actually finds cinematic aspects of ISIS propaganda intriguing, perhaps admiring the way (befitting of the age of selfies) terrorists love to document their own atrocities, using a lead character to speak the director’s mind, “Even the way they shoot it, it's like they're professionals.  I mean, the use of graphics, slow-motion, even a drone shot.”  If that’s not disgusting enough, less of an action thriller, this is really a threadbare romance taking place in a murky world of international terrorism, though there’s barely a pulse that registers, as the man in question is actually dead, killed off early in the film, yet the pangs of love survive.  There’s something silly and passé about the storyline, like recalling a bad dream, but it doesn’t have to make sense, though it’s an attempt to be topical.

Set in Denmark, with a pan of the sleek architecture of Copenhagen reminding viewers where they are, we follow a pair of hard-nosed cops, the more flamboyant Christian (Nikolaj Coster-Waldau) and the older, internally repressed Lars (Søren Malling), who seems lost on a different wavelength, cynical and downbeat, as if uncomfortable in his own skin.  While Christian obsesses about food and sex, Lars is moody and inherently disinterested all the time, though he’s punctual, picking up his partner the next morning, but his female sex partner in bed doesn’t want to let him go, allowing himself to get distracted, actually forgetting his gun, an act for which consequences invariably ensue.  Responding to a routine call, described as a domestic dispute (altogether missing a van parked out front in plain view), they encounter a man on the elevator with blood on the tips of his shoes, Ezra Tarzi, Eriq Ebouaney, never better than portraying Patrice Lumumba in LUMUMBA (2000), also appearing in de Palma’s own FEMME FATALE (2002), but here he goes through the motions as the angry black man, arrested on the spot, handcuffed and apprehended, with Christian borrowing his partner’s gun to take a look upstairs while Lars awaits a patrol van to take their prisoner.  What he discovers is revolting, as Tarzi has been torturing a victim with a knife, but by the time he runs back downstairs, Tarzi has escaped the cuffs and stabbed his partner in the neck (without his gun to defend himself), making a break out the window onto the roof.  Unsure of what to do, but at the urging of his partner, he bolts out the window giving chase, where the steepness of the roof gives each of them problems, with both perilously hanging from a dangling gutter overlooking the street down below in an homage to Hitchcock’s Vertigo (1958), eventually falling into a crate of tomatoes.  While Christian is momentarily dazed, men in suits apprehend Tarzi, taking him away, leaving Christian to ponder what just happened.  But this sets the wheels in motion, as Lars lies unconscious in a hospital bed while Christian unravels the dark past of Tarzi, a former special forces Libyan whose patriotic father was beheaded by a terrorist mastermind Salah al-Din (Mohammed Azaay), who as it turns out spent 12 years in Guantánamo as a model prisoner without incident, but literally hours after his release he goes underground completely undetected, currently seen prepping a young female suicide bomber on her next mission, which will send fear into the hearts of the West while bringing glory to God and Islam (“Ending the lives of infidels is a great thing.  Scaring the millions of others who see it live on TV is something even greater!”), with de Palma in split screen capturing the face of the assassin mixed with the horrified faces of the victims as she machine guns actors, models, and photographers on the red carpet runway of the Netherlands Film Festival (an homage to his own film Femme Fatale shot on the Cannes red carpet), causing sheer pandemonium, but also utter jubilation when viewed from al-Din’s perspective.

With underwritten characters that never come alive and a tepid orchestral score that falls flat, this borders on the banal, where easily the silliest thread in the film is the portrayal of the CIA, given comical stature from none other than Guy Pearce (in a bad accent) playing Agent Joe Martin, who has no redeeming moral values, so corrupt that he may as well be a criminal himself, essentially blackmailing Tarzi, who he kidnaps at the crime scene (while imprisoning his children), to do the dirty work that the CIA is hamstrung to do due to legal restraints, basically encouraging Tarzi to be a mad dog on the loose, operating with impunity, free to torture, murder, or rough up potential suspects as he pleases, hell-bent on revenge for the death of his father, ferociously targeting al-Din, with Agent Martin sitting on the sidelines casually taking credit for it all.  Meanwhile Christian joins forces with the detective assigned to investigate the case, Alex (Carice van Houten), who has a secret romantic history with his partner, a revelation that leaves Christian completely flummoxed, incapable of believing his partner kept secrets from him, but may explain his reticent behavior of late.  This romantic storyline is simply Hollywood overkill, as they love to express romance in the backdrop of war or some other tragic event, supposedly accentuating the power of love, but since Lars dies in the hospital while Christian and Alex are on the road in search of Tarzi, there is no love affair to speak of, as it all happened in a hermetically sealed universe, becoming more of a memorial tribute.  With all events converging in Almería, Spain, we discover a tomato motif used throughout the film is the means for weapons trafficking, smuggled while concealed in tomato crates onto ferries crossing the sea into Morocco, easily transporting weapons into Libya or Mali or the sites of other ISIS uprisings.  If it weren’t so comically simplistic, especially the coincidence of recognizing the terrorist leader in the front seat of a produce truck, following him to a bullring in the center of town where another planned attack is to take place, which must have lured de Palma, known for creating dynamic set pieces in real life locations, but this one kind of fizzles out instead.  Apparently they had funding difficulties, unable to find extras to fill the stadium to capacity, so the shot never materialized as intended.  Nonetheless, there are few memorable movie scenes shot in bullrings, so this has an air of anticipation, with all the forces converging at one dramatic point in time, a powderkeg about to explode, with de Palma mixing a modern era drone viewpoint with old-fashioned binocular shots, but few will likely find this resolution appealing, reduced to a one-liner from Agent Martin, explaining how he figured out what was going on, “We’re Americans, we read your emails.”  In the end, however, international terrorism has been reduced to a personal revenge saga, bathed in an unseen romance, with plenty of revolting propaganda footage taking center stage.
Posted by Robert Kennedy at 12:03 AM