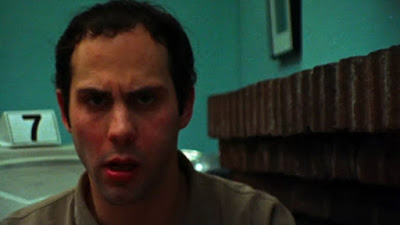 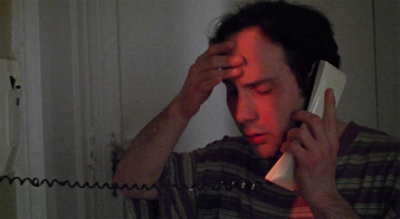 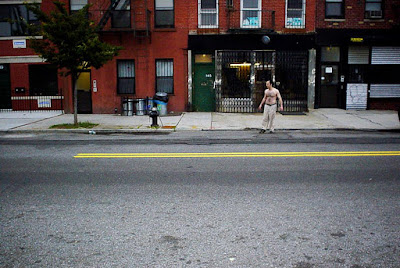 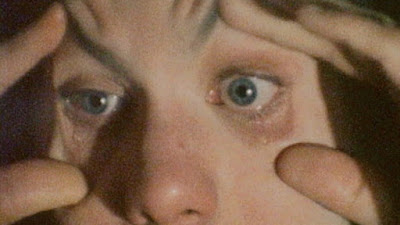 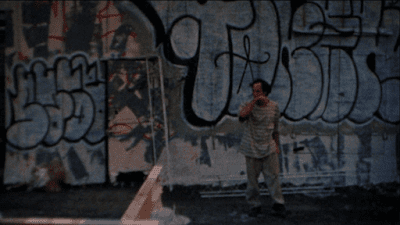 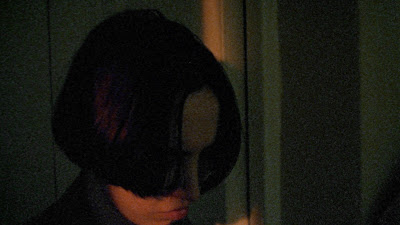 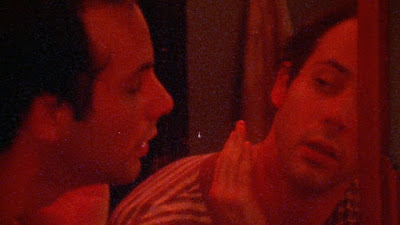 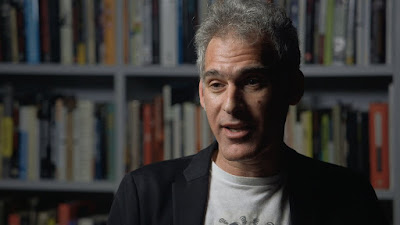 A relentless, unsettling and wretchedly unforgiving film that’s not only in-your-face, but occasionally resorts to a sledgehammer approach.  Written, directed and edited by Bronstein, this is as confrontational as filmmaking gets emphasizing an extremely difficult subject matter, the life and tribulations of a man on the edge who’s borderline coherent suffering from a psychotic anxiety syndrome of some kind along with a brain deficiency, nauseatingly annoying to anyone he speaks to as he prolongs the agony of the ordeal by never quite spitting out whatever he has to say, requiring an amazing amount of patience and tolerance just to listen to him but also to pry oneself away, requirements that the human condition simply lacks.  In this film, Keith (Dore Mann) resembles the kind of intense, deeply agitated sicko most people avoid like the plague and here he’s in nearly every shot.  He has a suicidal girl friend Laura (Mary Wall, the director’s wife) who appears to have a psychotic fear of closeness, spending most of the film in tears while in his company, actually stabbing him with a push pin when he accidentally comes too close.  Stuttering for words, apologizing profusely for taking up people’s time, Keith goes door to door selling discount coupons that allegedly raise funds for victims of multiple sclerosis, a profession he’s obviously not cut out for, and while it’s surprising some actually listen patiently at their doors while he tries to spit out the right words, he never makes a single sale and is ridiculed and bullied by his supervisor and fellow co-workers who accompany him to and from his route.  It’s a troublesome film filled with nothing but troublesome moments, told in a realistic manner with Ulrich Seidl anti-humanist overtones where an unending tone of abject miserablism reveals what a rotten life he has.  Commercial filmmaking this is not, but it’s not exactly riveting either, and at least for the first half, there’s nothing drawing the audience into his world.

That changes when we realize what an erudite and pompous ass his roommate is (Charles, played by Paul Grimstad), a stark contrast that obviously feels contrived, as in the real world, one would have nothing to do with the other.  So Charles, to express his annoyance with Keith’s smothering behavior, refuses to pay the electric bill, leaving them both in the dark.  This is typical of how people treat Keith, as the general rule is to abuse him as often as one can get away with, as if this somehow makes people feel superior.  Accordingly, viewers are implicated, as a pervasive impulse leaves audiences themselves laughing at the character, as if laughing at a “retard” onscreen has become acceptable social behavior.  Bronstein is a first time filmmaker who brings with him an Andrew Bujalski semi-hip audience that may have been swayed by critic Amy Taubin’s belief that Bujalski’s minimalist realism is the voice of the new generation, targeting an educated middle class that can't ever make up their minds about anything, who exist totally in a world of ambivalence spending their time at dead-end temp jobs that offer no challenge of any kind, resorting to snarky dialogue of stoned sarcasm that is used like a weapon, where putting down others is a major accomplishment in their day.  Yet films like this suggest Bronstein may speak for a “fucked up” generation that takes great amusement in their own dysfunctional perversities.  Keith is by no means stupid, but he has a pathological inability to communicate.  Somehow the audience mirrors the society at-large, tapping into that theater of being obnoxious when humor comes at someone else’s expense, where the greater Keith’s pathetic humiliation, the more the audience roars with approval.  Having no idea if this social phenomena is happening in other theaters, to say one grows uncomfortable with this particular audience reaction is an understatement.  Is it human nature to pick on those weaker than yourself, or is it socially learned behavior?  One suspects the latter.

Thankfully, real humor arrives in an extended scene without Keith in it, an odd little sequence that features Charles taking a senseless law school LSAT examination that he feels will lead to his employment as a waiter.  Another character arrives who is at least as ill-bred as he is, both specializing in the verbal put down, otherwise known as the technique of mind-fucking.  The scene develops slowly accentuating the absurdity of the situation, perfectly capturing the nuances of the characters who finally come to mean something, even if it’s only for laughs.  This little oasis of hilarity is short-lived, however, a sequence where words are lobbed at one another like guided missiles aiming for a direct hit hoping to disintegrate the other, where under the surface aggression is expressed through carefully observed dialogue that accomplishes nothing but futility.  From this pathetic intellectual void, Keith re-enters the picture only to sink further into his own psychological descent as his condition is realized through an endless journey into the night told with a Cassavetes-like edge captured by some brilliant 16 mm camerawork blown up to a grainy look from Sean Price Williams who follows him through darkened rooms, dead end corridors, and a maze of ever decreasing options, feeling more and more like a last-man-in-the-universe horror film.  The music and sound design are anything but subtle, perhaps too obvious in their attempts to express something close to those 50’s sci-fi films where the score reeks with psychotic brain fragmentation, dissonance, isolation, fear, horror, and dread.  Much of the finale is wordless with a dark, nightmarish overtone that is expressed with an assured cinematic flair, yet the overall feel left by this film is like getting pounded over the head by a hammer.  While it’s rare for cinema to feature a character as abjectly dysfunctional as this one, and the director deserves credit for that risk, yet it never becomes a compelling subject due to the insistent way it’s filmed, continuously mired in its own wretchedness (like wading through a minefield), as viewers are witness to an unending assault to the senses watching a single hapless individual openly exposed to a mercilessly brutal and indifferent humanity that can’t stop itself from feeling superior by taking out their frustrations on weaker individuals, resorting to bullying every chance they get, like a Pavlovian condition.
Posted by Robert Kennedy at 12:11 AM