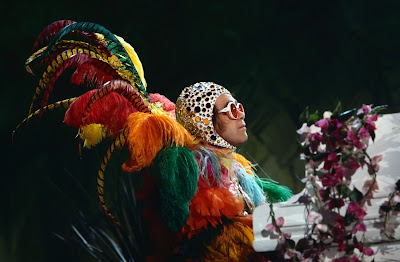 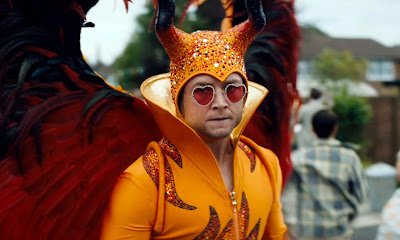 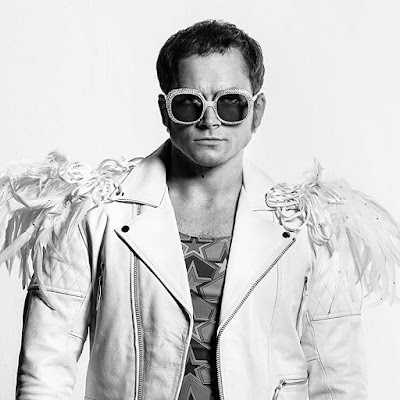 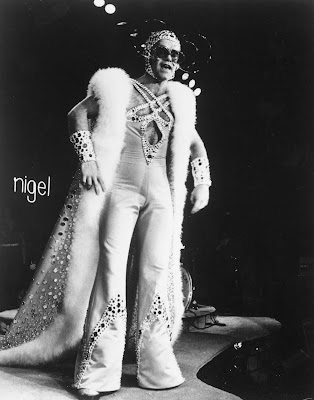 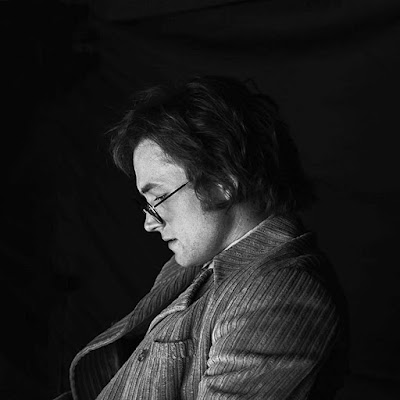 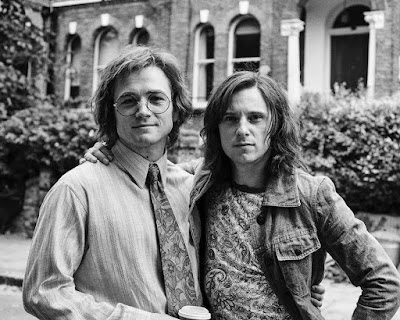 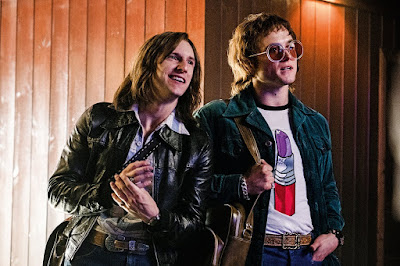 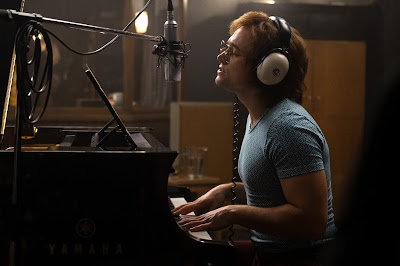 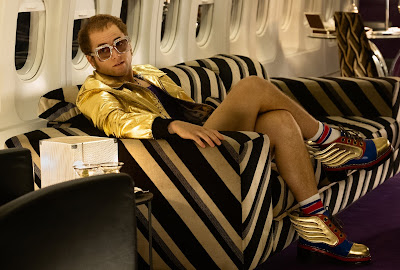 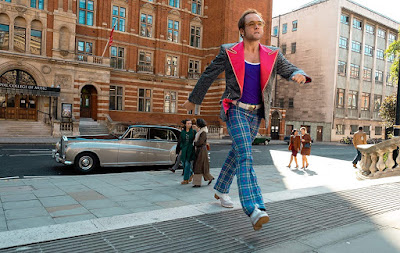 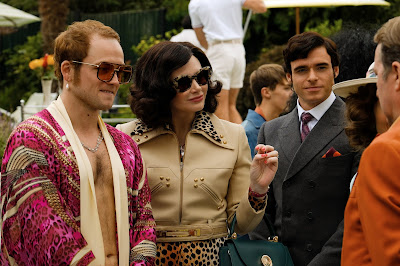 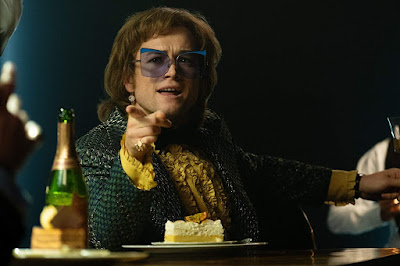 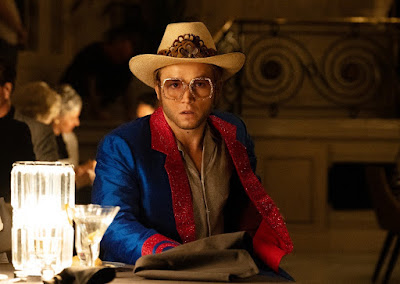 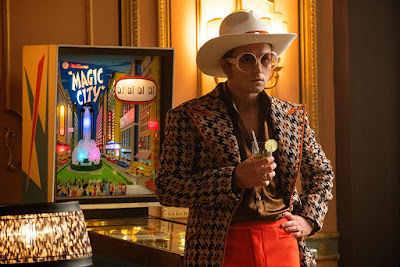 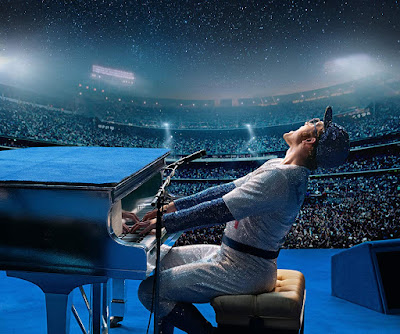 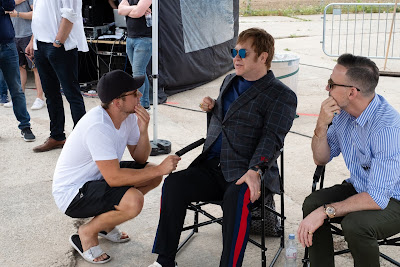 Taron Egerton, Elton John and David Furnish (left to right) on the set of Rocketman 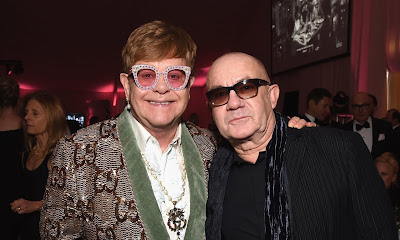 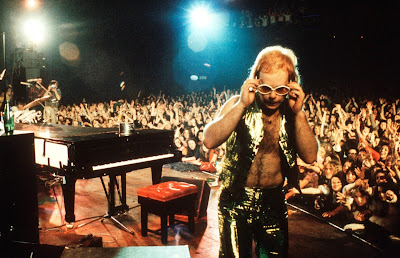 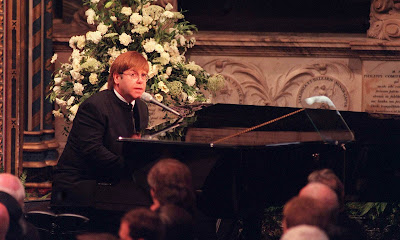 Sir Elton John signing ‘Candle In The Wind’ at the funeral of Princess Diana, September 6, 1997 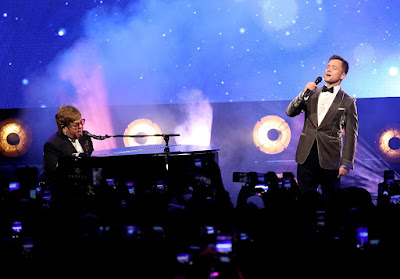 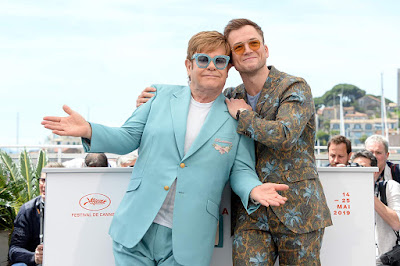 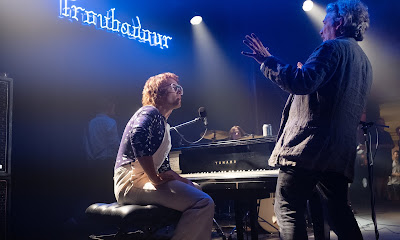 the director on the set (right) with his leading man

While documenting the typical rise and fall of a rock ‘n’ roll artist eventually consumed in drugs and booze, using a musical fantasia to tell the story of his hyper instability in what might be described as the 70’s, his young and miserable years, which might work better as a Broadway show, where an electric energy can build between performer and audience in an intimate setting.  As is, this is a fairly typical Hollywood embellishment, premiering on the red carpet as the opening film at Cannes, receiving a standing ovation afterwards, though demonstrating little directorial flair or prowess behind the camera, feeling more like extended music videos, with a wall-to-wall musical soundtrack that accompanies one hyper-embellished production number after another, where the emphasis is on exaggeration and overkill, playing fast and loose with the facts, basically created for mainstream consumption, where if the idea is to generate a hit, making gazillions of dollars, which is the Hollywood standard, then it will be considered a success.  As for distinguishing itself with any artistic originality, the film falls short, feeling overly formulaic, made by the same director who was brought in to finish BOHEMIAN RHAPSODY (2018) after the only credited director Bryan Singer was fired for undisclosed reasons with two weeks of shooting left.  That film was lambasted by critics yet went on to earn over $900 million dollars, winning four Academy Awards, including a prestigious Best Actor for Rami Malek’s portrayal of Freddie Mercury, earning the director another bite of the apple.  While there are a few moments that do stand out, most come early in the film, where the view of Elton’s childhood, meeting songwriter Bernie Taupin, and breaking into the music industry are all an exhilarating rush of youthful energy and excitement, but it quickly goes downhill after that, becoming a greatest hits montage, with little thought to what makes this artist uniquely compelling or universally beloved.  Instead overnight success leads to instant money and fame, squandered on drugs and alcohol that nearly destroy his soul, portrayed as a substitute for the love he never had, where his out-of-control lifestyle becomes a wrecking ball of self-destruction, viewed in a dizzying descent into loneliness and emotional isolation, cutting off all healthy relationships, finding himself desperately alone, and only then does he reach out for professional help to get clean and sober, with the film eventually running out of gas, overly laden with cliché’s and spiffed-up fantasy tributes that all look the same after a while, where the real surprise may be that the featured artist onscreen is still living happily and apparently doing fine, as he’s now nearly 30 years sober and in a loving relationship with partner David Furnish and two adopted sons.

At the outset, a door is thrown open revealing a near mythical figure dressed in a bright-orange-feathered sequined garb with two horns coming out of his head and heart-shaped glasses, walking his way down the hallway before interrupting a meeting in progress, where he’s a spectacle to behold, utterly outrageous, to be sure, but this is his initial entry into group therapy, introducing himself as an alcoholic, cocaine addict, sex addict, shopping addict, and a bulimic, where the entire film is told in flashback, recalling what he describes as a happy childhood, yet it’s anything but, offering a stark contrast of continual emotional neglect, where he’s an innocent kid, but under appreciated.  When his character (Taron Egerton doing his own singing) throws off his headgear and breaks out into song at the therapy meeting, all bets are off, breaking out into “The Bitch Is Back,” Soundtrack #1 | The Bitch Is Back (Introduction) | Rocketman (2019 ... (YouTube (1:55), initially sung by his 5-year old self, Reginald Dwight (Matthew Illesley), with instantaneous eruptions into song and dance routines (where his neighbors appear as back-up dancers) revealing a stream-of-conscience narrative.  Raised in an atmosphere of indifference, where his overly fashion-conscious mother Sheila (Bryce Dallas Howard) does not wish to be disturbed, remaining argumentative and prone to dark moods, seemingly more interested in cocktails and occasional quickies while the husband is away, not really lavishing attention on young Reginald, basically ignoring him while her coldly disinterested husband Stanley (Steven Mackintosh) is away in the Royal Air Force, himself overly strict and emotionally remote, trying to lay down the law at home each time he returns, only to see it undermined by his own wife who has little use for him.  The two squabble away their unhappy differences, continually heard fighting over Reginald, where’s he’s often to blame for their “unfortunate” circumstances.  The only one in his corner is his grandmother (Gemma Jones), who instantly recognizes a prodigious musical talent, registering him for study at the Royal Academy of Music where he demonstrates a remarkable ability to play back exactly what he hears for the first time on the piano, note for note, quickly enrolled in a classical repertoire.  But his tastes lie elsewhere, developing a passion for early rock ‘n’ roll figures, dropping out of school after five years and playing in local bar bands, including a back-up band for touring American R& B reviews, with one of the male singers offering a provocative kiss on the lips, opening the door and shedding light on a closeted existence he was in denial about.

His career only gets going when he meets songwriter Bernie Taupin (Jamie Bell), two shaggy-haired individuals brought together by manager Ray Williams (Charlie Rowe, who managed Elton for his first five albums), with one having a gift for writing songs while the other composes melodies for those lyrics almost instantaneously, working together as a team, where watching him pick out the first notes to “Your Song” on his living room piano is particularly poignant, (https://youtu.be/WEyxkgXjBuo) YouTube (3:01), with Dwight choosing the stage name Elton John, bringing with it a flair for flamboyant outfits, giant spectacles, and an electric stage presence.  Getting their first start on an American tour at the Troubadour in West Hollywood, the rush of energy is presented in a dreamlike montage of the surreal, with Elton literally floating in air, but the audience ate them up, singing along in the chorus, growing wildly enthusiastic, invited to an after-hours party at the home of Mama Cass, where their dreams literally come true, becoming an overnight sensation, recording hugely successful record albums, playing to sold-out venues, suddenly living in high style like rock ‘n’ roll royalty, with Elton having his first affair with a man who would later become his manager for the next 25 years, John Reid (Richard Madden), with an overly tame gay sex scene in bed, yet breaking a barrier, as this is a first from a Hollywood studio film.  His lifestyle choices, however, soon veer out of control, partying like Hugh Hefner in his own Hollywood mansion, two-timed by his manager, which leaves him devastated, walking out the door uttering, “I’ll still be collecting my 20 percent long after you’ve killed yourself.”  This longtime relationship appears much more amicable than what is presented here, as John sued Reid after 25 years, claiming mismanagement, a suit he lost in court, yet he was still offered a hefty out-of-court settlement afterwards.  This is a film where all the money and drugs and all the success in the world can’t buy him happiness, as he’s still that shy kid in the corner who couldn’t get his parent’s attention, feeding himself pills to dull the pain, growing paranoid from the drug consumption and wasted from the alcohol, simply throwing his life away until it becomes so unmanageable that he grows suicidal, without a thought in the world of the consequences, growing deliriously unstable until he literally bursts into that therapy room asking for help.  While there’s a happy ending, the film is meant to be a rollicking ride, though it pales in comparison to Julie Taymor’s ACROSS THE UNIVERSE (2007), for instance, which uses lyrics from Beatles songs to actually move the narrative throughout the entire movie, a much more astute visionary experience with utterly brilliant artistic design, with Baz Luhrmann’s Moulin Rouge (2001)  equally comparable for bringing all the razzle dazzle.  This isn’t in the same stratosphere, with a director displaying musical flourishes that feel so ho-hum in comparison, rarely altering mood or style, using fairly standard choreography, nothing that’s ever eye-popping, though many seem to be enjoying the glitz and glamor of it all.  You’d think Hollywood of all places could produce a smashingly original gay musical fantasia, one that rises to new heights, like an anthem for gay culture in all its glory, mixing stellar choreography with wildly inventive visual expressiveness, yet sadly it was not to be, as they didn’t go all-in for the best gay talent, using instead a non-gay lead actor and director, for instance, which is just the tip of the iceberg, feeling like a lost opportunity.
Posted by Robert Kennedy at 12:12 AM