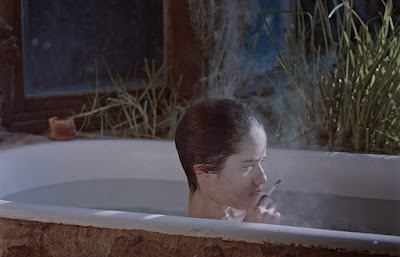 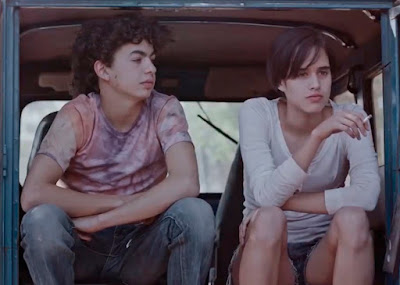 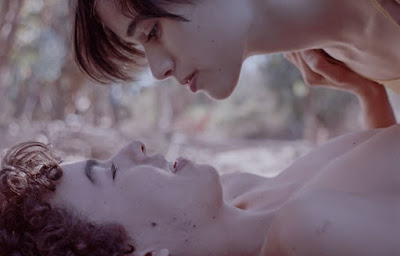 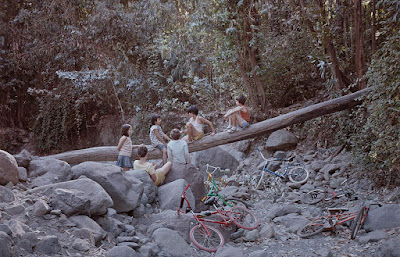 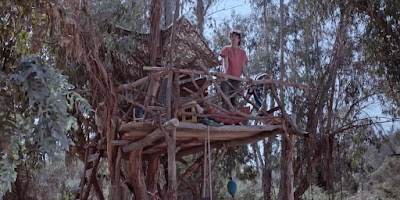 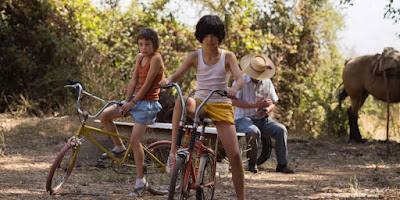 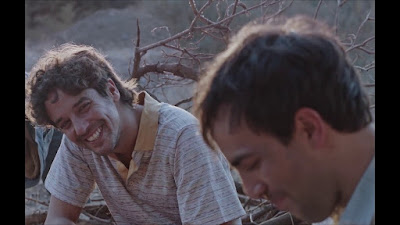 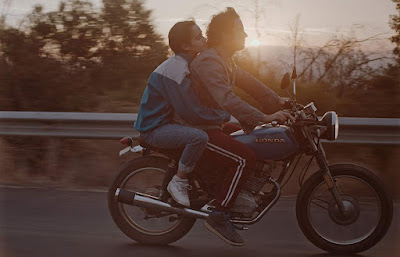 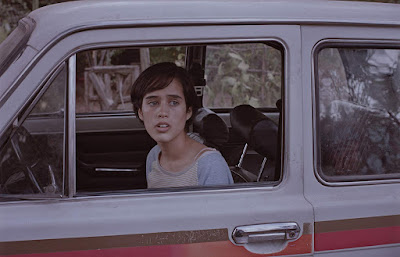 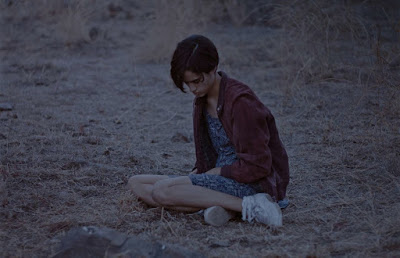 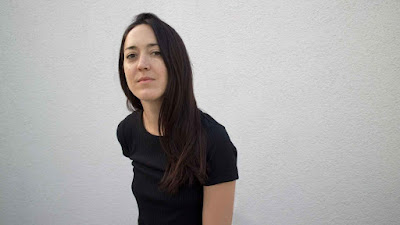 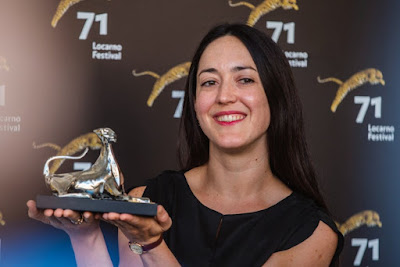 Described by the director as “an invitation to another time,” this memory piece recalls Chilean childhood recollections of a different kind, strewn together in chaotic fashion with little drama to speak of, recreating a mix of hope and fear that accompanied the fall of Pinochet in 1990.  Lest we forget, Pinochet was a ruthless military dictator installed as a puppet leader by the United States following a CIA-led coup d'état in 1973 that surrounded the Presidential Palace with armed troops, removing from power the democratically elected socialist Unidad Popular government of President Salvador Allende (who blew his head off with an AK 47 assault rifle), effectively ending civilian rule, leading Chile into one of its darkest periods.  Pinochet ruled for 17 years via a military junta, rounding up all leftists or socialists, executing thousands, while imprisoning and torturing up to 80,000 more, with as many as 300 criminal charges pending against him for human rights violations, embezzlement, and tax evasion at the time of his death in 2006, having stepped down as President in 1990, remaining Commander-in-Chief for 8 more years and Senator-for-life under a rigged constitution, with many from his regime remaining firmly entrenched in positions of power afterwards, thwarting any hopes of a developing democracy.  Yet 1990 was a time of hope, offering a sliver of light and new possibilities, where everyone was waiting for democracy to start, but it was all an illusion, doused by the lingering shadow of Pinochet’s brutal rule.  The film, however, provides no backstory, remaining silent on the bleak political realities, instead focusing upon a rag tag collective of ten families living on the outskirts of Santiago in the forested foothills of the Andes Mountains.  Perhaps reflective of years with having no say in important matters, this collective can’t agree on anything, specifically whether to buy additional land or pay for the installation of electricity, bickering back and forth about who would pay more, eventually deciding against the idea, preferring to live off the grid in candlelight with no phones connecting them to the outside world.  One of the members of the group is seen either repairing or tapping into an existing water supply, basically taking what they need, offering insight into the collective morality where anything goes in the name of survival.  The kids have a similar mindset, uprooted from their homes, where there is no parental authority, allowing the kids to run free and do what they want, usually ending up bored with nothing to do.  While viewed mostly as middle class and white, no one is seen working or going to school, and they don’t grow their own food, so it’s unclear where money comes from, as people routinely buy cigarettes and alcohol and whatever food they eat, while driving vehicles that make trips into town that require gasoline.  The film simply isn’t concerned with these matters, instead creating an impressionistic mosaic of day-to-day routines, capturing a rhythm of life from a previous time.

This film established Sotomayor as the first woman to win the Best Directing prize at the Locarno Film Festival, with a jury concluding she “achieved something that most filmmakers struggle to gain throughout their career: an impressive balance between reality of storytelling and inner capture of psychologies and sensibilities.”  Perhaps identifying with Lucrecia Martel and the slow and languorous feel of LA CIÉNAGA (2001), choosing mood and atmosphere over any narrative storyline, the film evolves in a dreamlike manner jumping from one incident to another, freely moving back and forth from kids to adults, often seen just lying around, shooting the breeze, or not doing much of anything, allowing the camera by Into Briones to linger on what’s unspoken, the space between moments, probing the psychological tensions that exist throughout, mostly lying dormant, then erupting at inopportune moments, creating an ambitious yet also confusing look, only rarely singling out individual characters, as it’s about a collective, after all, with adults mostly appearing weak and dysfunctional, creating a divide between old and young, as they’re hardly examples to look up to, with even the youngest kids understanding the adults haven’t a clue what they’re doing.  Out of this chaos comes the sexual maturation of 16-year old Sofia (transgender nonprofessional actress Mariana Hernández transitioning to Demian Hernández, now identifying as a man), already a chain-smoker and something of a rebel, routinely talking back to her father, shown with a Sinéad O’Connor poster next to her bed, viewed as the film’s central focus (or stand-in for the director), tossing aside the childish notions of the puppy dog that follows her around, Lucas (Antar Machado), more of a plaything, while turning her eye on the older Ignacio (Matías Oviedo), who views her in much the same way she sees Lucas, but has a motorcycle to carry her out of there.  Sofia is seen at one point listening intently to old tapes of her mother singing, switching the tapes back and forth in an effort to match her songs with her own personal memories, much like the construction of the film, but her disillusionment is all-consuming, mirroring the failings of her generation, led to believe a change was coming, only to be doused with failure and utter disappointment.  The same thing is experienced by a younger 10-year old girl Carla (Magdalena Tótoro), who loses her dog, last seen in a cloud of dust chasing after her car as they’re driving away, putting up signs around the neighborhood, hoping someone will see him.  When a man reports a sighting, leading her parents into a crime-infested neighborhood home that houses a variety of dogs (allegedly stolen) behind a fence, accepting payment for theirs, only it turns out to look like her dog, but it’s not, never following Carla’s instructions, answering to a different name, causing heartbreak for this poor girl whose life is wrapped around her pet.  Setting the dog free near the end is emblematic, as it never wanted to be there, but the place it called home was no picnic either, suggesting the spirit of freedom is entirely elusive, like a mirage.

The lazy days and nights all lead to a celebrated New Year’s party, a festivity of food and music, with plenty of alcohol, where everyone is expected to perform a song, elevating everyone’s hopes and expectations, especially Sofia, who dreads spending any more time there with her deadbeat father, dreaming of joining her absent mother pursuing a singing career in Santiago, yearning for an escape, telling everyone her mother will show up for the party and whisk her out of there, eagerly anticipating that moment as if it’s the answer to all her dreams.  Of course, that moment never comes.  Still, using generators for power, they string up Christmas lights, set up a stage, and sit around drinking, many adults flat on their ass, with a stream of people entering and exiting the view, which describes the entire picture, as it’s a muddled portrayal of the past, much of it shifted over time, where only certain moments stand out.  One is the downbeat mood of Sophie’s song, her version of Mazzy Star - "Fade Into You" (Official International Video) HD - You YouTube (4:15), a song that wasn’t released until 1994, yet fits the anguished mood of just wanting to lose yourself in someone else.  Here Lucas is searching for Sofia, who is running away with Ignacio into the woods and taking sexual liberties, only to awake afterwards and discover she’s all alone.  During her long walk back, well into the next morning, while the parents are sleeping it off, the kids discover the forest is ablaze, with everyone running to help fight the fire with buckets and tree branches, hoping to beat it into submission, but it has apocalyptic overtones, suggesting something is all coming to an end, perhaps an age of innocence, with adults finally waking up and asserting responsibility, but the damage is enormous, leaving them devastated, left with only a skeleton of their former selves.  The kids jump into the streams and stand in the water, believing they’ll find protection there, while Sofia’s father, noticing she’s disappeared, goes searching for her in the smoky ruins of a desecrated forest.  Her disappointment is so vividly overwhelming that you actually fear what she might do, finding herself beneath a waterfall, immersing herself in the water’s ferocious flow, as if literally disappearing back into nature.  The calm after the storm is unsettling, wondering where this will all lead, as the foundation of their communal encampment has been wiped off the earth, forcing them to find an alternative path.  The film draws comparisons to Lukas Moodysson’s Together (Tillsammans) (2000), another look back on a director’s own autobiographical experience of growing up as a kid in a commune, where a child’s perspective is more wondrous and enthralling, where you’re literally free to do whatever you want, while adults are more anxious and befuddled by it all, wanting to make it work, but constantly running into problems, where whatever was the original motivation to live in a collective changes over time as initial dreams fade into something new, becoming more personal, possibly liberating.  There’s simply no sense of liberation here, viewed more as a fatalistic excursion into the unknown, as the adults are too perplexed by it all, worn out and defeated by the insurmountable ordeal, having little in reserve to draw upon when things go bad, continually making piss poor decisions, abdicating responsibility, as if they never grew up and had to face the world on its own terms, retreating to some euphoric life that never existed, where it’s all over even before it began.
Posted by Robert Kennedy at 12:02 AM