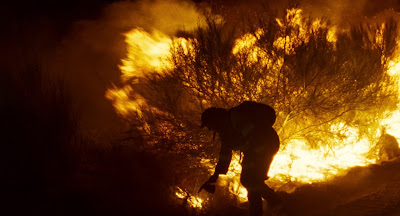 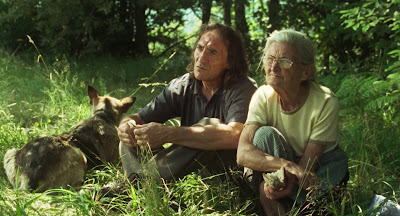 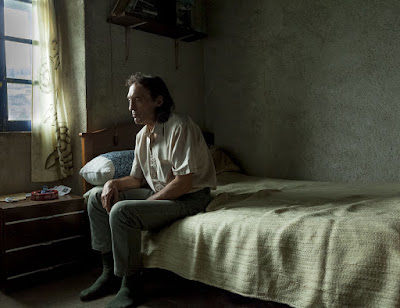 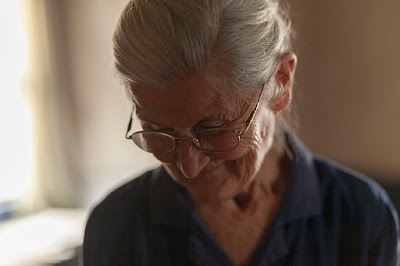 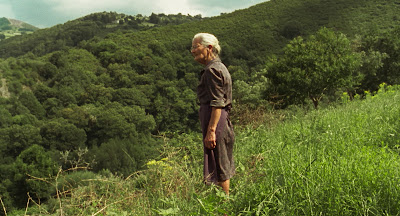 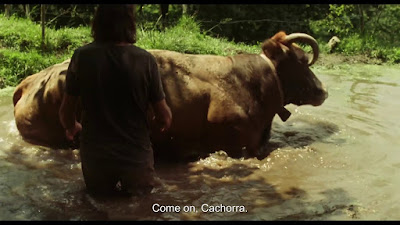 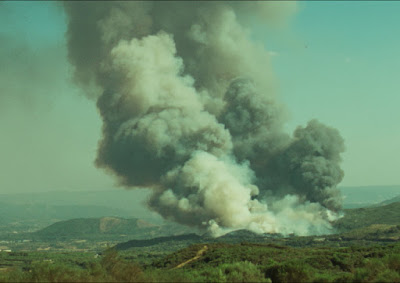 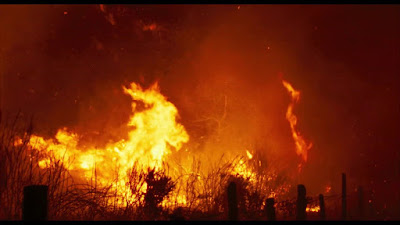 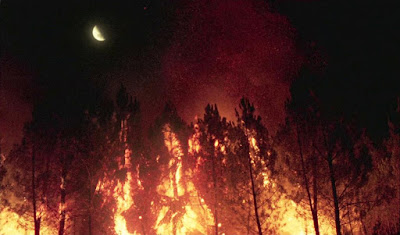 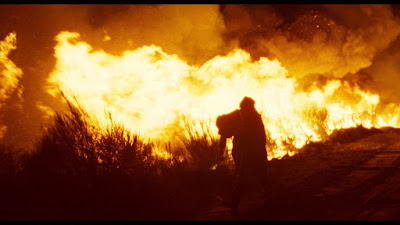 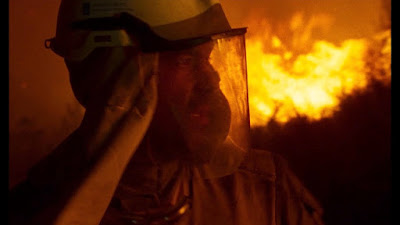 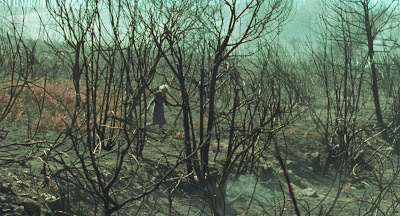 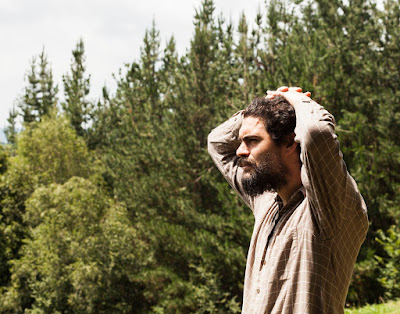 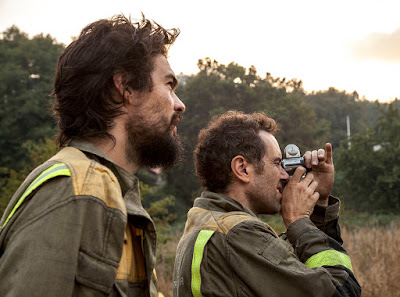 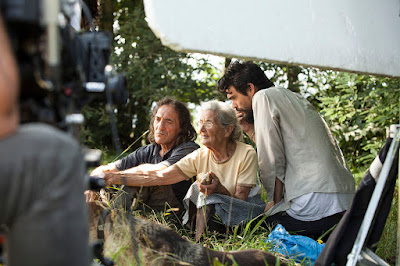 Among the most rapturously beautiful nature photography you’ll ever see, captured on 16mm by cinematographer Mauro Herze, opening with the gorgeously poetic imagery of a deep Galician forest in northwestern Spain accompanied by what sounds like an eternal soul, the voice of countertenor Andreas Scholl singing a sacred cantata "Nisi Dominus - Cum Dederit" de Antonio Vivaldi. Andreas ... YouTube (5:09).  This astonishing work captured the Jury Prize (2nd place) in the Un Certain Regard section at Cannes, a slow-paced meditation on changes occurring in the natural world, yet as soon as the timelessness of the primordial world is established, giant bulldozers are seen cutting down the eucalyptus trees, clearing a path for modernized building projects meant to attract tourists, yet altering the ecological balance in the rural world containing the oldest mountains in Spain.  This choreography of destruction comes to a stop before a massive tree, with the unforgettable opening montage feeling like a requiem for what’s being lost, with the ancient song sounding more like a hushed prayer.  Directed by a French-Spanish filmmaker, his first to be shot in Spain, it’s given a semi-documentary look, using mostly non-professional actors, where they had to wait until an actual forest fire was deemed safe and under control before they began shooting in the region, where there’s only the bare outlines of a story, while the vibrancy of the film comes in the way it’s shot, an evocative tone poem beautifully blending music into the stunning natural landscape compositions, including the mournful trombones from Georg Friedrich Haas, Georg Friedrich Haas: Konzert für Posaune und ... - YouTube (18:45), which comment upon the natural rhythms of life that are established in this near wordless glimpse of the arduous daily routines in the region.  Mostly featuring two characters, Amador (Amador Arias) is released from prison after spending two years convicted as an arsonist for starting a fire that devastated the region.  As he walks through the solitary road cutting through the mountains, rainfall accompanies his footsteps along with low-lying fog, returning to the Ancares mountains of the Galician Massif, which is also the home of the director’s family.  A steep drop off the road leads him to his former home, where his elderly mother Benedicta (Benedicta Sánchez) is working in an oversized garden.  There are no hugs or kisses, just a simplistic offering of food, as the region is all about the basic necessities.

Settling back into his life of rural seclusion, they own three massive cows and one calf that roam the grassy hillsides to graze, where they seem to go up and down the steep slopes with ease, moving to the sound of cowbells, gently prodded by Amador and his dog.  From high atop their hillside, they can view the construction renovation work going on below in the valley, with Benedicta suggesting to them that Amador could work alongside them, but they’re openly suspicious of his reputation and wordlessly go silent at the suggestion, though one man speaks up afterwards that he’s a decent guy who’s just fallen on hard times.  Rural life seems threatened by extinction, with modern intrusions seeking new, though as yet unproven, alternatives, leaving the land decimated by deforestation, the exact same practice that is driving indigenous populations in droves out of the Amazon and into cities that deplore them and refuse to hire them, paying them less wages while forcing them to live in substandard housing.  This picture of modernization is out of balance, putting profits ahead of longterm planning, remaining clueless about the consequences.  In a momentary lull on the side of a hill, there’s a curious mother and son conversation about this imbalance, as the natural forest canopy that retains moisture has been cleared, drying out the forests, Fire Will Come (O Que Arde) new clip official from Cannes - 1/2. YouTube (1:15), with Amador describing the eucalyptic trees as “demons,” suffocating the roots of other trees and plant life, yet his mother’s calm response reveals the wisdom of her age, “If they cause pain, it is because they themselves suffer.”  Almost inexplicably a cow wanders into a small pond, remaining stuck for a prolonged period of time, eventually needing a tractor to pull her out, apparently injuring her leg in the process, prompting a visit from the local veterinarian, Elena (Elena Mar Fernández).  As they ride back home with the injured cow, they strike up a conversation, one of the few in the entire film, though it becomes punctuated by a classic Leonard Cohen song from the 60’s, Leonard Cohen -- Suzanne – YouTube (3:47), a pleasant surprise that feels strangely appropriate, offering a hint of romantic longing, but from afar, allowing the poetry to speak for itself, perfectly blending into the surrounding mountainous landscape.


The first movie in the Galician language to premiere at Cannes, shot in the same village where the director’s mother grew up, the film contains intimate details of familiarity, ever so carefully doling out scant information, never revealing too much, showing a particular sensitivity for animals in the region while regularly cutting to a distant hillside covered in a morning mist, adding luxuriant imagery to enhance one’s appreciation for the immaculate beauty of the region.  When Amador stops for a drink in a local bar, it’s perhaps not surprising to find Elena there mingling with friends, but the look she gives him across the room has changed, hearing the talk, covering her tracks, just not willing to be so friendly anymore, as in small communities there are no secrets.  As we see Amador stoically driving back home alone, racing past him in the opposite direction are fire trucks.  A shot from the air reveals the smoke, resembling a volcanic eruption, as the attention is quickly turned to a group of firefighters, sent initially on foot to contain the spread into more habitable regions, joined by homeowners who are protecting their homes and refuse to leave, but the massive wind gusts and excessively dry conditions prove to be too much, as they are all simply overwhelmed by the blaze, becoming an uncontrollable inferno that rages through the night, exhausting their water supply, revealing a desolate landscape by morning with only the burnt stalks of trees remaining, the ground still steaming in an eerie calm.  As Amador inspects the conditions with his mother, he is brutally attacked by one of the villagers who seethes with contempt at his sight, a former friend who blames him for losing everything, fuming in disgust, inconsolable afterwards, while others simply stare in silence.  Questions of guilt and responsibility lurk just under the surface throughout the film, remaining ambiguous, even as Amador has been identified and targeted, yet there’s nothing to suggest he had anything to do with it.  Still, there are unanswered questions.  Everything about the people in the region suggests they all respect the land, where it’s hard to believe any would intentionally destroy it, yet the finger pointing is inevitable, as people seem to need someone or something to blame.  The film simply doesn’t provide easily identifiable answers, allowing viewers to decide for themselves who the likely culprit may be in this story, though the ominous foreboding from the opening may provide the needed clues.  It’s an extremely poetic depiction of a coming apocalypse, happening here and elsewhere, told in meditative silences with a painterly eye.
Posted by Robert Kennedy at 12:04 AM