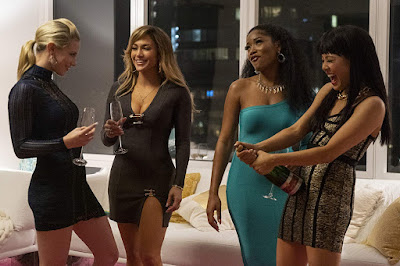 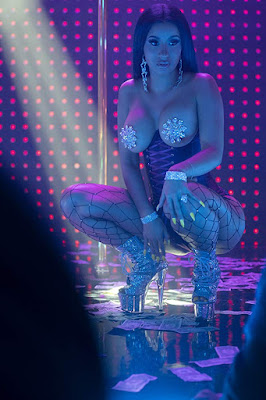 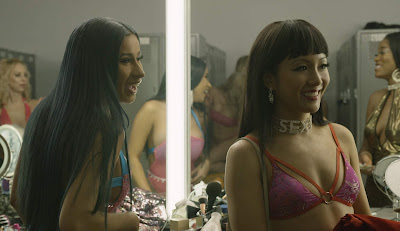 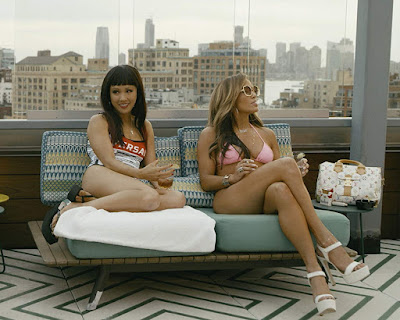 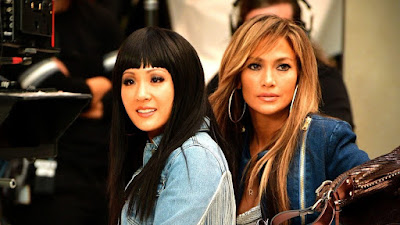 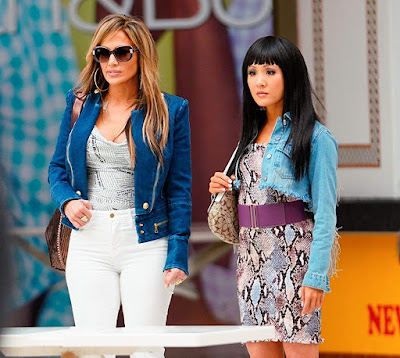 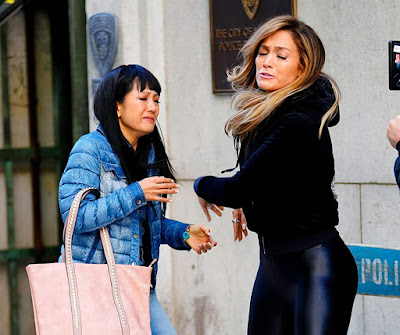 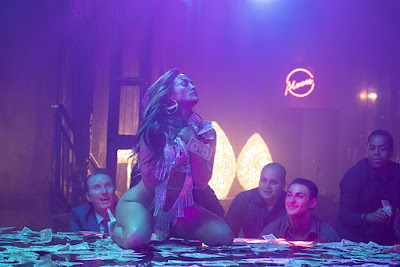 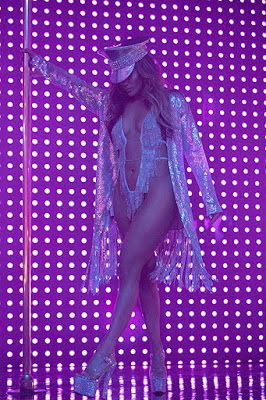 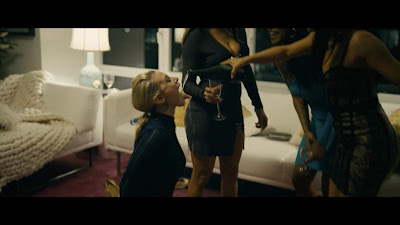 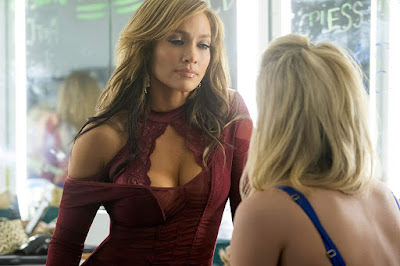 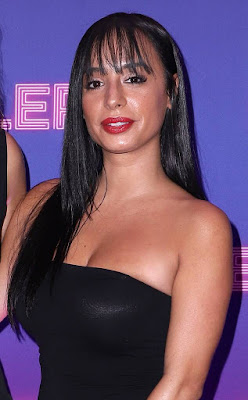 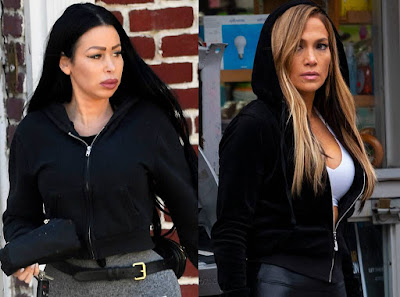 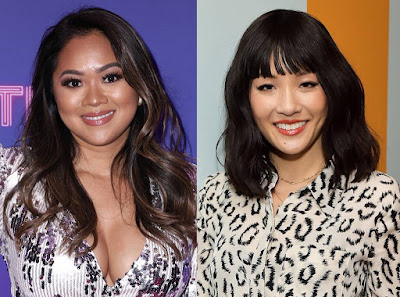 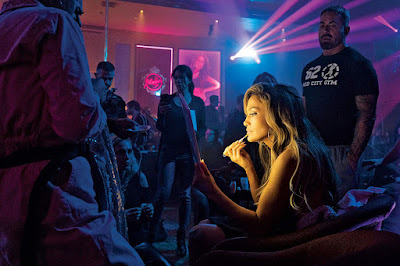 Jennifer Lopez on the set 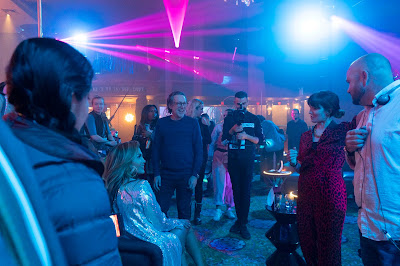 Chris Rock once claimed in his stand-up comedy routine that “As a father, you have only one job to do:  Keep your daughter off the pole!...If she’s dancin’ on a pole, you fucked up!”  What he was talking about is the subject of this film, though glamorized and viewed with a sense of female empowerment, much of which can be traced back to Jennifer Beals in FLASHDANCE (1983), a glorified crowd pleaser.  Throw Jennifer Lopez into the mix and we have another titillating experience that sensualizes the art of pole dancing, given the glamor treatment, somehow making it chic, transforming prostitution into a Vegas act of girl power.  Not sure any of this ever meets the bar of relevancy, feeling more like a fairy tale, but it’s designed to be another audience pleaser.  The main problem with commercial filmmaking is that it follows trends instead of staking out new material, where this is an attempt at political correct filmmaking, adding a female writer/director, supposedly offering a female’s perspective, but the film feels exactly like a male-written movie, the only difference being women are committing the crimes instead of men, where they are basically interchangeable.  Even though inspired by real events, it’s like watching a female mafia, as they have no moral values, where it’s all about making money, and when they get caught, they justify their behavior by claiming everybody does it.  This is exactly how criminals think, believing the world is filled with cheaters, so why not take advantage when given the chance?  Designed purely for commercial entertainment, there’s nothing about this film, and that includes the performances, that rise above the fray, as it never introduces any element of complexity and is instead content to play by the numbers, where it’s little more than conventional filmmaking, demonstrating no cinematic flair, looking more like an extended music video  It’s kind of a weird film in that it doesn’t generate fun or excitement, like the big personality Rat Pack stealing money from the Las Vegas coffers, delving instead into a sleazy, male-dominated business that couldn’t be more corrupt, as strip clubs aren’t glamorous, they’re dark and depressing places, where it’s about throwing your money away just about as fast as you can spend it, where the amoral actions of the female lead characters are simply deplorable, drugging people with the intent to make them forget whatever happened, basically stealing their credit cards for trumped up charges, where it’s highway robbery in the form of kidnapping, as you knock them out for a few hours with the sole purpose of robbing them blind, like the ultimate date rape crime.  There’s nothing fun about this, as it’s a contemptible crime performed by half-naked women dressed in glamorous designer outfits, made to look like they’re being clever, but it’s an utterly revolting practice, just another selfish, get rich quick scheme that takes people for suckers, ultimately leaving a sour taste in one’s mouth. Equally relevant, the real-life women being portrayed in this film didn’t receive compensation from the movie, so the film steals their lives, portrays them onscreen, inaccurately, by the way, and then pays them nothing.  There’s something underhanded about that which deserves to be mentioned.

Inspired by an original article written by Jessica Presser in New York magazine December 28, 2015, The Hustlers at Scores -- The Cut, the film transfers this device into the movie, where the actions are presented as a flashback from an interview given to an investigative journalist, though the reason for the interview is never clear, as she’s revealing information about a group of strippers gone rogue, operating their own criminal ring on the side, using drugs to knock out their clients, taking as much from their credit cards as was humanly possible, all without having any sex and very little work, where the actual science involved was finding the right guy to fleece, serving him a single drink with a group of attractive women dressed to the nines, treating him like a king, getting his hopes up about the wonderful time he’s about to have, and then sucker punch him, believing this kind of set-up is an actual business transaction, though it’s theft, perhaps something this group of women wouldn’t want published, where talking to the press seems like an act of betrayal, a she’s basically ratting out herself and her friends with nothing apparently to gain.  As it turns out the reporter talked to more than one of the girls, but it’s never clear why they exposed themselves to the public, airing all their dirty laundry in public.  Perhaps they were proud of themselves, thinking they were so deviously clever.  This is equally confusing in the film, making little sense, though without these personal revelations there’d be no material for the film, which might have worked better portraying a completely fictional group of scam artists, leaving out the interviews.  Instead what we have is a group of former strippers fed up with a system designed purely to exploit the girls, where the men running the clubs made all the money, deciding instead to turn the tables on the clients by excluding the strip clubs as the middle men and sharing all of the profits themselves.  Even if it turns out to be grand larceny, these women think the men have it coming, as they’re mostly super aggressive Wall Street types with money coming out of their ears, where degrading women is their stock and trade, so they simply reverse engineer a system designed to steal all their money based upon a fictitious evening’s entertainment that never materializes.  For this kind of film to become a popular sensation only reveals the extent of our moral abyss and our fascination with narcissism, as this kind of one-way, self-serving behavior, whether initiated by men or women, is simply revolting, mirroring the actions of entertainer Bill Cosby, currently serving 3 to 10 years for his extensive date rape practice of drugging women, though we have seen this sort of thing before, in Mary Harron’s over-the-top use of surreal horror in American Psycho (2000) or Scorsese’s The Wolf of Wall Street (2013), both of which demonstrated much more cinematic flair than this film, as did Steve McQueen’s Widows (2018), where this has much more in common with Sofia Coppola’s equally airheaded celebrity worship in The Bling Ring (2013).

At the film’s center is Constance Wu as Dolores aka Destiny (modeled after Roselyn Keo, who in reality was the business mastermind, not the innocent projected here), a single mom who takes up stripping to support her family, becoming mesmerized by watching the performance of a seasoned pro, Jennifer Lopez as Ramona Vega (modeled after Samantha Barbash, aka Samantha Foxx, aka Miss Foxita), who commands attention with a pole routine that produces maximum results, drawing plenty of attention (and money) from the men, even though she’s a decade older than most of the girls, who she mentors, showing them the ropes, taking Destiny under her wing, actually developing a routine together, becoming her personal trainer and choreographer.  Adding to this collective is Cardi B as Diamond, a Bronx-born stripper loosely based on her own stripping career, who also helps to mentor Destiny, Kiki Palmer as Mercedes (modeled after Marsi Rosen), and Lili Reinhart as Annabelle (modeled after Karina Pascucci), the latter two joining Destiny in Ramona’s inner circle after she hatches a plan to steal thousands of dollars from their clients.  The investigative journalist is Julia Stiles (modeled after Jessica Presser).  With the film essentially highlighting the rise and fall of Destiny, we see the film through her eyes, adding a personal narration about getting into the business, establishing some degree of success and economic independence before the economic disaster in 2008 when the stock market collapse left half of Wall Street unemployed.  Having to reinvent their careers when the club business went dead, with girls resorting to prostitution instead of dance acts, desperate times called for desperate measures, resorting to a powdered substance spiking a customer’s drink, a combination of ecstasy, creating a dreamlike reverie, and ketamine, an animal tranquilizer that makes them forget, often ending up totally blacked out, with the girls ringing up fictitious charges on their credit cards before sending them home in a cab.  “Easy peasy,” as Ramona describes it, an untraceable crime that leaves the men too humiliated and embarrassed to do anything about it, as most are married men with families, or have high profiles where this kind of information will never be made public.  Initially it works like a charm, but they get greedy, hiring more girls, some of whom are unreliable or on drugs, as they extend their operations.  Instead of leaving something for a follow-up scam, they take it all, emptying accounts for the credit card maximum, like $50,000, which would be considered a gold mine, quickly using up their best clientele, forcing them into more dangerous territory, reaching into the unknown.  While the camaraderie of the women is the centerpiece of the film, it mostly features the friendship of Ramona and Destiny, though we never learn much about any of the women, as there’s not a lot of character development, instead this accentuates the murky atmosphere of the clubs and the scantily clad women who work there, growing euphoric at what they’ve discovered, a way to get rich by barely doing any work at all, though Ramona (in real life it was Destiny) is viewed as a master at getting the personal details needed for credit card transactions, which might include passwords or security questions.  While it’s given the sleek look of a well-executed scam, using slow-motion to accentuate each of the women, with wall-to-wall music, there’s no covering up the fact that what they’re doing can destroy lives.  Nonetheless, they maintain their position that these men are assholes who deserve done to them what they routinely do to others, no regrets, no questions asked.  While it’s presented as a breezy, lightweight comedy, by the end, with the cops reluctantly breaking the case (from a tape recording by one of the clients), Destiny starts to reflect on what she’s done, yet there’s never any sense of remorse, leaving a dull empty feeling afterwards, never providing a hint of complexity or a sense that any of this matters.  For a much better film, view Andrea Arnold’s revelatory and much more emotionally devastating American Honey (2016).
Posted by Robert Kennedy at 12:03 AM