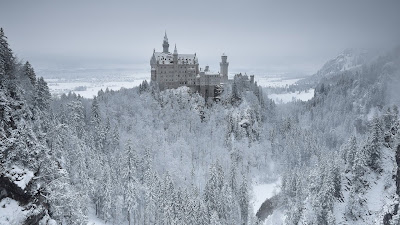 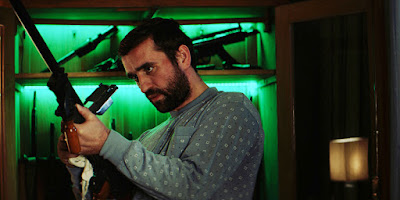 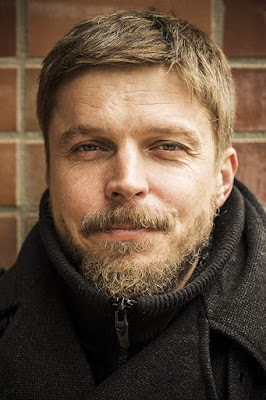 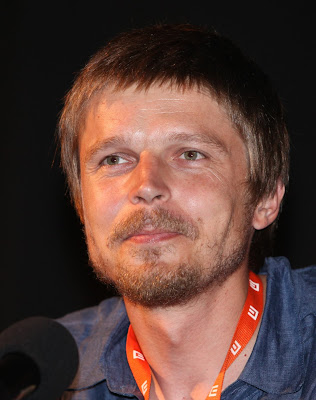 A hidden treasure among the film festival circuit, this slowly developing drama about the evils that lurk within a tiny mountainous community in Slovakia reveals the price paid for complacency, recalling Michael Haneke’s epic prequel to WWI in Germany, The White Ribbon (Das Weiße Band – Eine deutsche Kindergeschichte) (2009), where hollow truths and unchecked atrocities lead to the rise of the Nazi party in Germany.  Similarly, this director also examines symptoms of communal guilt, denial, and random acts of violence, all leading to a societal breakdown, with a sense of dread pervading the overall stillness, where the authoritative structures (Church and State) throughout the region have conspired to corrupt the young through a far-right youth paramilitary organization known as The Guard (modeled after a real organization called Slovak Recruits, originated by covert Russian agents recruiting on Facebook, Pro-Russian paramilitary groups in Central Europe ...), supposedly acting “to protect their family and homeland,” yet the unchecked underlying message sent feels more like a nationalist hate campaign directed against outsiders, particularly Muslims and gays, targeting the meek and timid in a xenophobic and homophobic cleansing of their own community.  A joint Czech and Slovak production, the topic it deals with has huge implications in current political developments across Eastern Europe, revealing how sons perpetuate their fathers’ mistakes, copying their flaws with their own children, where a hateful element in society develops from bigoted and prejudiced views that soon creep into the lives of virtually everyone.  At the center of the story is Milan Deniš (Milan Ondrík), winner of the Best Actor award at the Karlova Vary Film Festival, a proud family man working construction as a guest-worker in Germany, where the wintry landscapes in the snow are unforgettable, returning home to his family just before Christmas.  What he discovers is a house filled with tension, as his wife Zuzka (Zuzana Konečná) is utterly exhausted from worry about their introverted oldest son Adam (František Beleš) who keeps to himself, speaking to no one, yet continually leaves the home unannounced at all hours, making it difficult for her to keep track of him.  Both Adam and his younger brother Igor regularly attend The Guard training sessions, viewed by the parents as little more than scout camp, but in addition to militia exercises, their minds are fed regurgitated hate propaganda that sticks with them, unquestioned, preaching uniformity in the ranks.  But the entire village is shocked at the suicide of one of the boy recruits, Peter, a friend of Adam’s who was alleged to be gay, as if that’s what drove him to it.

Milan and his family are devoutly religious, regularly attending Sunday Mass, where nearly two-thirds of the country is Catholic, even more in the small towns, with communion provided by a young priest (Daniel Fischer), who remarks upon the suicide (driving the family out of the church), claiming it is contrary to both love of God and love of self, and that it goes against everything the church stands for, instructing parishioners to pray the family at this difficult time, yet also reminding the congregation of the paramount need to protect “us.”  Afterwards they visit Milan’s father (Lubomír Paulovic), a crusty old man who has not mellowed with age, waxing nostalgic about the Slovakian collaborationist state with Nazi rule in WWII as the only time the country had it good, “where there was order,” chastising his son openly in front of his family for being too soft, abruptly making a quick exit, remembering how this man all but ruined his own childhood, continually pushing him to be a tougher version of himself, growing up feeling inadequate, that he was never good enough.  After the humiliation in church, Milan pays a visit to Peter’s family, still in shock over what happened, revealing that Peter informed them he was bullied and raped on the day he committed suicide.  Local authorities visit the family, in particular Adam, asking about that allegation, but he denies any knowledge.  Home life, though, grows more confrontational, as Milan gets curious and asks questions about this group his son belongs to, tagging along for some group activities, which includes performing civic duty shoveling snow for the snowbound, but also witnessing how tough they ride these kids, where a militaristic drill instructor works them to near exhaustion during calisthenics.  While Adam is uncomfortable with his father’s prodding, often growing irritable and testy, his wife’s nerves are on edge as well, as Adam is sending bad signals to his younger brother with some of his outbursts, claiming a need to be vigilant protecting rural villages from the dire threat of Islamic extremists.  Meanwhile, Milan has a vast collection of rifles, handguns, and automatic weapons that he keeps in a locked case in the bedroom and enjoys cleaning them regularly, which upsets his wife even more, especially since their sex life has been inadequate since his return, where the whole question of masculinity comes into question in this film, particularly in male-dominated societies with a dominant history of patriarchal rule.

Without using a musical score, the film relies upon a well-executed storyline and an unflinching realism to hold the viewer’s attention, far more complex under the surface where underlying details slowly accrue, creating a more expansive view of the town.  Peter’s parents visit to question Adam about what happened, but the only thing he reveals for certain is that Peter was not a homosexual. Shortly afterwards, Adam runs away, taking one of his father’s guns with him, as Milan’s inflamed anger reaches epic proportions, discovering his son is hiding with the local priest, who offers a stern lecture prohibiting any harm done in the House of God, first of all returning the gun, then allowing him to speak with his son once his anger subsides.  As it turns out, the group is singling him out as Peter’s friend, making similar accusations, alleging he is weak, where they’re starting to pick on him, claiming he needed the gun to defend himself.  Shortly afterwards a rock is thrown through their window, while members of The Guard appear to be spying on them and following them wherever they go, resembling a terror campaign, as an underlying fear follows them wherever they go.  So Milan takes matters into his own hands, confronting one of the leaders of The Guard, pulling his own gun on him, threatening to use it if anything happens to his son, probably not a wise move, as this only paints a target on his back for the future.  Even at church, fellow members shun them, refusing to shake hands as is customary in their church services.  Little by little Adam is more forthcoming, revealing how the group turned on Peter, violating him sexually, revealing the graphic details to his father, feeling guilty over what happened.  At Adam’s urging, they speak with the priest, believing he has good intentions, only to discover that “protecting the homeland” has reached into the church orthodoxy, that the actions of The Guard are actually guided and supported by the church, giving them a public platform in the sermons, giving rise to the term clerofascism, following in the footsteps of Jozef Tiso, a Catholic priest during the war who agreed to Jewish deportations to Auschwitz, executed for treason and other war crimes after the war, but still a hero to the far-right, playing into the rural conservatism of the region.  When it finally reaches a breaking point, with all other avenues exhausted, it’s Adam that chooses to reveal what he knows to the police, with his father’s support, both seen waiting together before offering testimony.  But first, as if to send their own message, they reveal the exact penalties for perjury, subject to fines and lengthy terms of imprisonment.  But the real kicker, one of the police officers comes in just to say hello, who happens to be the primary leader of The Guard, which says it all.  There is no separation of Church and State in Eastern Europe, as in this case they are one and the same, both adhering to the same principles.  What’s particularly chilling about this film is just how understated it all is, where there’s no overreach, with occasional doses of humor, beautifully establishing the intricasies of a family dynamic, revealing just how isolated and shunned individuals and their families can be, cleverly directing the poisonous rhetoric to unsuspecting children, casting a dark cloud over the community, leaving a sense of hopelessness, where citizens have little recourse.
Posted by Robert Kennedy at 12:01 AM