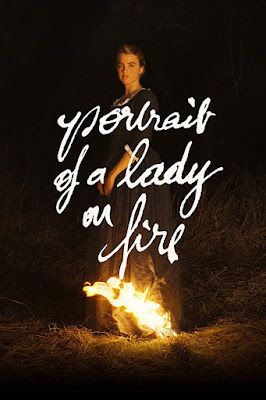 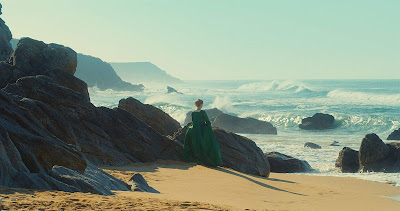 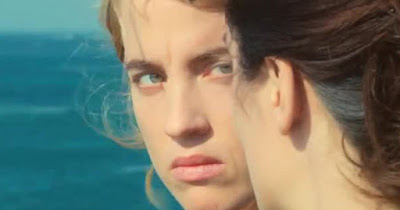 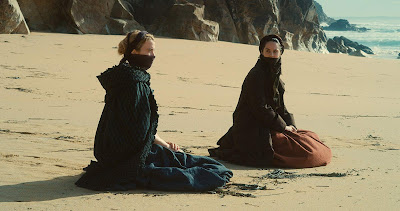 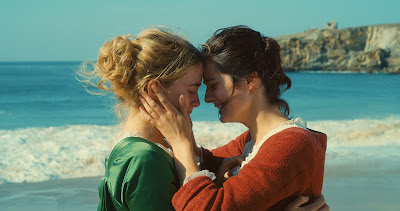 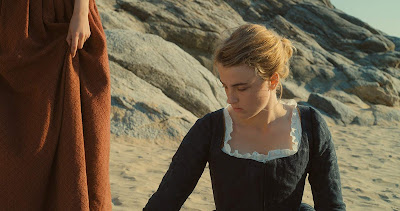 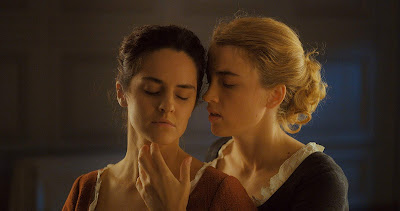 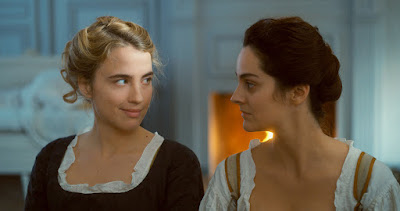 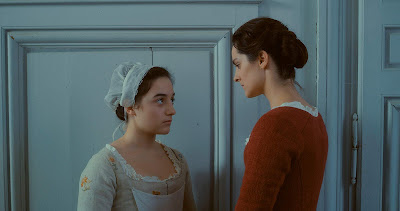 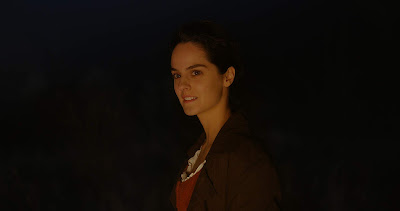 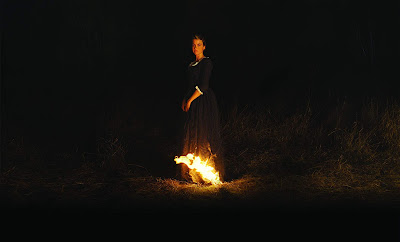 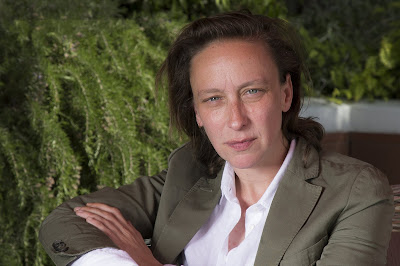 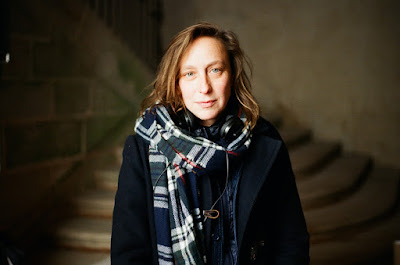 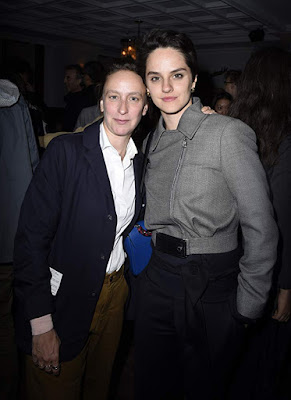 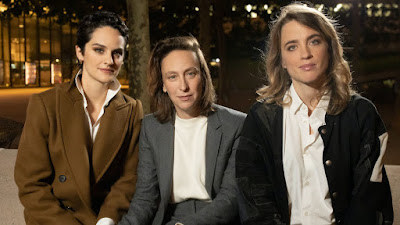 Winner of the Best Screenplay at Cannes, writer/director Céline Sciamma is known for exploring adolescent youth identity and gender issues with earlier films Tomboy (2011) and Girlhood (Bande de Filles) (2014), while she was also a co-writer in André Téchiné’s Being 17 (Quand on a 17 ans) (2016), but this far outshines anything she’s ever done before, easily her most fully mature effort, resembling a performance-driven Jacques Rivette film mixed with the bold feminism of Jane Campion’s The Piano (1993), where the breathtaking beauty of the Brittany seaside coast draws apt comparison, given the painterly detail of cinematographer Claire Mathon.  Unlike Abdellatif Kechiche’s award winning film Blue Is the Warmest Color (La Vie d'Adèle, Chapitres 1 et 2) (2013), the first gay/lesbian themed film to win the Cannes Palme d’Or, Kechiche was criticized for portraying lesbian sex through a male gaze, suggesting it revealed far more about the male director’s desires than how women feel about intimacy, with this film serving as the corrective, nearly entirely eliminating any presence of men from the movie, creating a stunning 18th century historical romance between two women that breathes with life.  Very few films have ever captured female love and desire as potently as this film, and even fewer have been seen through a woman’s viewpoint and perspective, but this film captures the unbridled spirit of first love by unleashing the female gaze, with so much of the film built around that artistic aesthetic, adding so much internalized complexity, with long wordless sequences where the women send long gazes or quick glances at each other, effectively using a naturalistic setting, culminating with a rapturously unedited final shot that may come to define this film for years.  So many gay love stories have felt compromised, as the gay person involved in the project has been overruled by outside forces, leaving certain details suspect, where the intimacy just doesn’t feel authentic.  That simply doesn’t happen here, grounded by the brilliant performances of the two leads, where Marianne (Noémie Merlant) has been commissioned to paint a portrait of Héloïse (Adèle Haenel), a reluctant bride who has been called away from the convent in the wake of her sister’s death, only to learn she’s been promised in marriage to her late sister’s fiancé, with the portrait to be sent to her future husband in Milan, a man she’s never met, as her widowed mother (Valeria Golino), an Italian countess, has made all the marital arrangements in order to return to prominence in Italy.  What makes this more personal than usual is that Haenel and Sciamma are former lovers, where the film was written with Haenel in mind.  As a result, this love story navigates its own way through unchartered territory with an innate sense of familiarity and cinematic gravitas, feeling vibrant and new, where the result is positively jaw-dropping.

While Merlant is a relatively new face, Haenel has been seen before in Katell Quillévéré’s Suzanne (2013), which hasn’t played anywhere in the vicinity since an initial festival screening, Luc and Jean-Pierre Dardenne’s The Unknown Girl (La Fille Inconnue) (2016), and Robin Campillo’s 2017 Top Ten List #8 BPM (Beats Per Minute (120 battements par minute).  Given a brief classroom introduction with Marianne posing as she instructs her young art students, “Take time to look at me,” which becomes a central theme for the film.  Jumping almost immediately into a flashback, Marianne is seen arriving by boat rowed by men to a small, isolated island, where the rough seas offer a rude awakening, leaving her completely drenched when she arrives on shore, having to hike up a steep cliff carrying her own gear to an isolated chateau of an aristocratic family.  Greeted warmly, given a spacious room, she develops an easy rapport with Héloïse’s servant, Sophie (Luàna Bajrami), before meeting the Countess, explaining the difficulty of the assignment, as her daughter refused to sit for the previous painter, so she instructs Marianne to observe her closely, that her daughter thinks she’s just a walking companion.  Much like Hitchcock’s Gothic Rebecca (1940), where a new wife (Joan Fontaine) is overwhelmed by a potent series of small clues about the previous wife who was beloved by all, the first Mrs. de Winter, the impeccable Rebecca, the introduction to Héloïse is similarly quite clever, moving to the front where she remains concealed behind the hood of her cloak, so all viewers can see is a quick glimpse of her blond hair, or an ear lobe, or the sight of a single eye staring back curiously.  She’s equally adamant about her uncertain future, remaining defiantly aloof, not really invested in the idea of marriage, as it was not her own choice, though it does conform to the custom of the times in aristocratic circles as a way of maintaining noble status.  Marianne, who is all eyes, must study every small detail and commit it to memory before retreating to her chamber room at night to draw and paint in private, given only five days, which are lost in nervous uncertainty.  Preferring to show the final portrait to Héloïse herself, she’s not immediately taken by it, feeling blindsided by an act of sabotage, thinking she’s been tricked.  So Marianne impulsively paints over her face, rejecting it as well, which doesn’t exactly sit well with the Countess who is off on a planned trip to Italy, but will return in five days, offering her another chance, with Héloïse strangely agreeing to sit for the portrait this time.  This puts them on more equal footing, and while Marianne has no noble lineage, she has experience in the world, bringing a well-informed and somewhat modern perspective, so when Héloïse is scrutinized so closely, she responds with equal force, becoming a battle of wits, with both sides equally matched.  The essential historical truths ring true, as in this era women are deprived of choosing who they want to marry, whether or not to bear children, and also what they depict on the canvas, as women were prohibited from using male models, effectively minimizing their artistic reach.  For instance, what 18th century female painters can you name?  Not that there weren’t any, but who’s heard of them?  Their exclusion from the profession was no accident.

Sciamma has the foresight to include the importance of Sophie, who is not overlooked, but is a constant presence in the lives of these two women, viewed as sincere and forthright, but undergoes draconian measures when she has what amounts to a painful abortion, which is given a surreal context, particularly when she is lying on a bed next to a newborn infant, yet the powerful imagery is transformed to an angelic painting where it is given an altogether different meaning.  An historical costume drama accentuating the female form, one interesting facet on display is exposed cleavage, where interestingly the lowest on the economic scale (Sophie) reveals the most, while the most wealthy (Héloïse) reveals the least, though the Countess beats all the young contenders by a mile.  With her mother away, the women exude greater freedom, but spend a great deal of time each day working together, with Héloïse becoming an artistic collaborator, not content to be a passive subject (while Sophie does embroidery), developing a romantic friendship that grows by leaps and bounds, but instead of sex on display, which is what male filmmakers prefer, what matters to these women is establishing trust and understanding, which happens before anything turns physical.  While the Edenesque look of the island takes centerstage, becoming an idyllic and highly romanticized dreamscape, it’s also clear that Sciamma has carefully constructed a dialogue of co-equals, which extends into their relationship, making what might appear to be a highly idealized utopian dream to be an essential core of their existing reality.  That may be the most exquisite feature of the film, but it’s well established before the first kiss and the smoldering emotions erupt onscreen, which only accentuates the heart of the message being sent to viewers, as this is not some artificialized triviality, but the real thing.  Perhaps the scene of the film takes place at night as there is a gathering of many women standing around a fire, perhaps dozens, where the darkness of the night actually creates a background look of Da Vinci, given a painterly look in historical detail, when out of nowhere this women’s a capella chorale, composed for the film by Jean-Baptiste de Laubier and Arthur Simonini, La Jeune Fille en Feu (Bande originale du film) - YouTube (3:03), creates a special excitement, using multiple musical refrains, like singing in rounds, where each of the women in the picture comes alive.  It’s a startling moment, but utterly enthralling, building to a scorching intensity, culminating with Héloïse’s dress catching on fire, which seems to release all the repressed desires.  Another musical motif is heard at the end, connecting to an earlier sequence when Marianne was describing the sound of a symphony, something Héloïse had never heard, using words poetically to emphatically create the rush of exhilaration from the “Summer” Presto section from Vivaldi’s Four Seasons, Antonio Vivaldi - Concerto L'estate RV 315 – YouTube (2:49), which is heard again in a miraculous final shot, the camera fixated on the subject, with a stream of emotions simply cascading through one’s veins, exuding a feeling of utter jubilation, while also punctuating an air of untold tragedy, recalling the ancient legend of Orpheus and Eurydice, where the euphoria simply can’t last.  All in all, this redefining film is truly a majestic experience.
Posted by Robert Kennedy at 12:08 AM