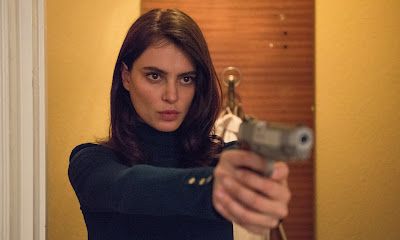 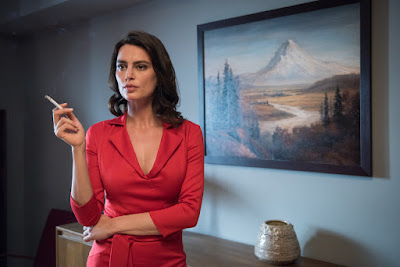 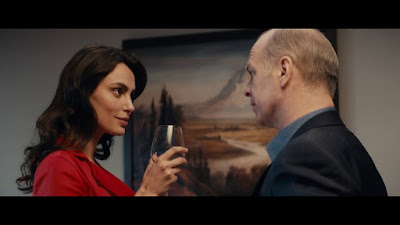 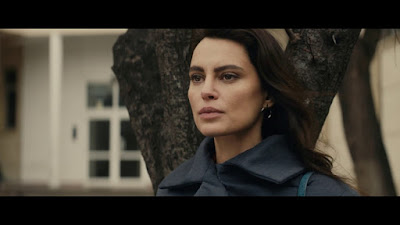 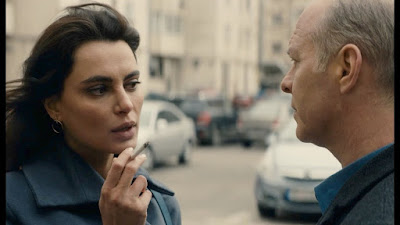 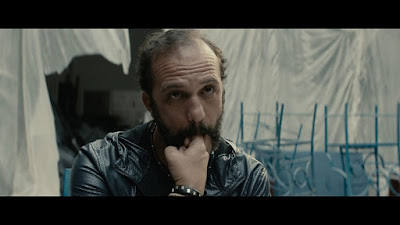 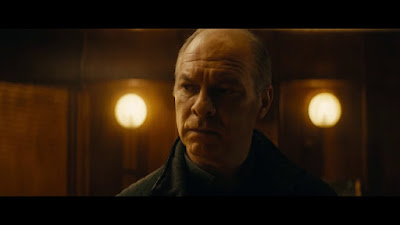 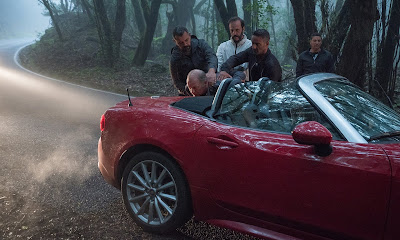 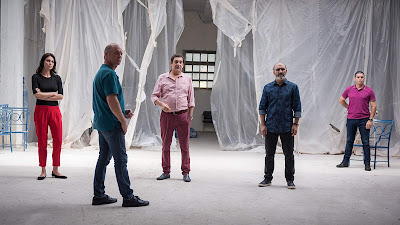 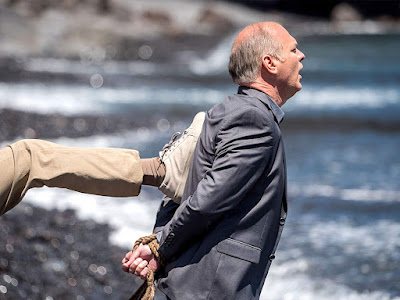 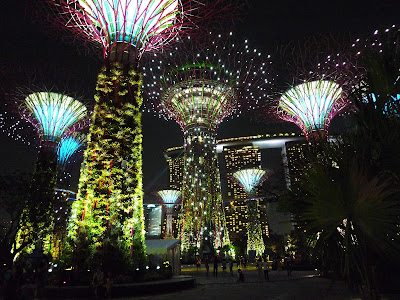 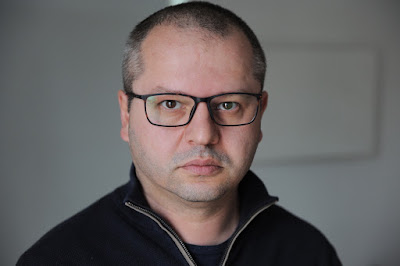 An interesting take on a genre film that is extremely entertaining, though repetitive at times, making an absurdist noir thriller that is meant to be playful and fun, from the opening notes of Iggy Pop - The Passenger – YouTube (4:44) that greets viewers at the start of the film, letting viewers know that they’re in for a wild ride.  From the maker of The Treasure (Comoara) (2015), and before that the deadpan comedies 12:08 EAST OF BUCHAREST (2006), winner at Cannes of the Caméra d’Or (Best First Film), and POLICE ADJECTIVE (2009), Jury Prize (2nd place) winner of Un Certain Regard, this director has built quite a following, most of whom will be thrilled with this new film, but it doesn’t rise to the heights of his earliest films.  Nonetheless it’s something to experience, if only for the wall-to-wall musical selections that come to define this adventure into behind-the-scenes government espionage, where there are more double crosses in this film than a lifetime of viewing other films, where the unexpected becomes the expected.  La Gomera is one of Spain’s Canary Islands, located in the Atlantic Ocean off the coast of Africa, catering to sophisticated resort living for the rich and wealthy, featuring stunning landscapes and ocean views.  Here it is an island of intrigue that greets our deadpan protagonist Cristi (Vlad Ivanov), brought to the island in order to infiltrate the mafia and recover 30 million Euros concealed inside a mysterious mattress manufactured in Bucharest, where his opening remarks upon reaching the shore is that he’s being followed, alerting viewers to strange and mysterious methods to avoid detection, namely showing the eavesdroppers what they want while hiding one’s real intentions.  Appropriately, the beautiful and curvaceous femme fatale Gilda (Catrinel Marlon, named after the infamous Rita Hayward film), is a dubious agent who sleeps with Cristi to avoid raising the suspicions of the officers surveilling his apartment, creating an alluring diversion.  “Forget what happened in Bucharest,” she tells him, but of course this only inflames his desire, but he must keep his real feelings hidden away from view.  He’s been brought to the island to learn an ancient whistling technique that has been used as an effective means to communicate across deep mountainous ravines, supposedly heard from as far away as two miles, though it requires intensive training for a novice.  Used by criminals to avoid police detection, Cristi needs a quick learn in order to get an important underworld figure out of prison, Zsolt (Sabin Tambrea), so his whereabouts throughout are largely concealed, requiring strict security measures to get wherever he needs to go.

While Cristi gives the appearance of freedom, he’s really a closely watched prisoner, though whatever entity he swears his allegiance to remains ambiguous throughout.  The hotel where he stays is notable for continuing to play recognizable opera arias nonstop, and when asked about it, thinking it might drive the customers away, their view is that it may enrich them, so viewers become intimately familiar with Maria Callas, Maria Callas "Casta Diva" Norma (Bellini) - Tullio Serafin ... YouTube (5:37).  One clever device is to introduce new characters with a color coded, neon title card revealing their name, as if giving them their own chapter, as the storyline swirls around these new faces, like Magda (Rodica Lazar), the Bucharest police chief tracking Cristi’s every move (the whistling is designed to keep her in the dark), Paco (Agusí Villaronga), an island mob boss under the mistaken belief that he’s in charge, or Kiko (Antonio Buíl), the whistling instructor who ends up biting off more than he can chew.  The film is a throwback to a golden era of cinema, drawing comparisons to THE BIG SLEEP (1946) with a largely incomprehensible plot that’s impossible to follow, though here it’s all in good fun, as Porumboiu loves to tread in murky waters, creating layers of bewildering intrigue punctuated by an infamous double or triple cross, where one’s allegiance is constantly shifting, making overt references to John Ford’s THE SEARCHERS (1956), even recreating the legendary shower scene in Hitchcock’s Psycho (1960), though when some unfortunate American filmmaker shows up at a secret warehouse location expressing an interest in shooting there, well, perhaps he was taken too literally as bullets quickly fly.  Between a jailbreak, a money laundering scheme, a suppressed romance, and having to contend with the mob for the money, Cristi is up to his ears in problems, yet he’s away from the everpresent gloom of Bucharest, ending up in the sunny climate of the Canary Islands, what could be so bad?  Well in this film, we’re about to find out, with Cristi playing both sides with little success, as mob underlings start paying a visit to Cristi’s mother (Julieta Szonyi), who’s suddenly thrown into the mix, inadvertently becoming one of the players, though she hasn’t a clue, as the storyline continually expands beyond borders into previously unexplored territory, all of which is fertile grounds for criminality.

The most expensive film this director has ever made, it showcases distant lands along with stunning landscapes and architecture, beautifully shot by cinematographer Tudor Mircea, always devising clever ways to get to these faraway places, making fabulous use of colors and costumes, where the whistling technique travels well, effective even in urban areas, though you’d think these weird sounds would immediately put the cops on high alert, but they are continually befuddled.  Racing from one set piece to the next, this is a high-energy crime-caper mystery, using rotating characters that continually shift the emphasis of the story, leaving Cristi forever caught in the middle of it, never knowing who or what to believe, prompted by allies who conveniently call themselves friends, only to let him down in the end, creating a sketchy picture of the underworld and its inhabitants, with Ute Lemper providing the proper background filled with delicious exaggeration, Ute Lemper performs "Die Moritat von Meckie ... - YouTube (3:34).  Getting threatened, roughed up, and left for dead, he’s continually crawling out of a hole that he’s dug for himself, eventually running out of options, with violent overtones everywhere you look, including a lengthy shoot-out sequence that produces plenty of casualties, like a kind of urban war games, yet the stakes grow even higher in the countryside home of his mother.  When all appears lost, bloodied and bandaged and out of commission, the film takes an extremely strange turn at the Las Vegas-like Gardens by the Bay in Singapore, suddenly all aglow in fireworks and neon signs, becoming a majestic, show biz finale filled with superlatives, yet it feels like a magnificent ending for another film instead of this one, with our muted hero overshadowed by the awe-inspiring, heavily illuminated spectacle of the night that takes on a character of its own, almost unworldly, at odds with everything that came before.  It almost feels like it’s not real, perhaps the thoughts of one’s imagination, becoming a surreal extension of this mystifying cops and robbers film that takes a strange turn into matters of the heart, like a wish-fulfillment, or the answer to one’s dreams.  Whatever you make of it, it’s immensely watchable, with musical superlatives shifting from the serene calm of Johann Strauss II - The Blue Danube [1080p] - YouTube (9:48) to a thunderous chorus of Carl Orff, ORFF Carmina Burana « O Fortuna » - YouTube (2:50), yet driven by a rousing overture from Offenbach: Orpheus in the Underworld - Overture – YouTube (9:29), creating a delirious final spectacle that will likely please any audience.
Posted by Robert Kennedy at 12:03 AM