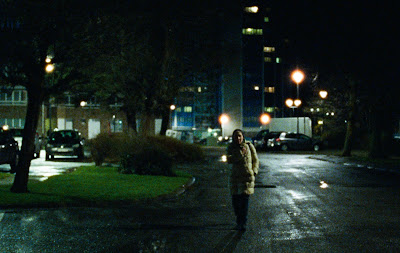 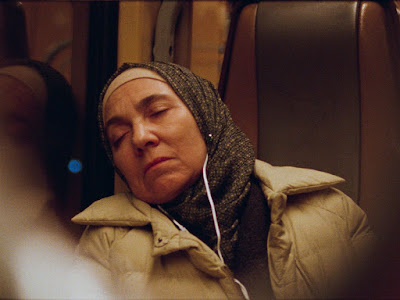 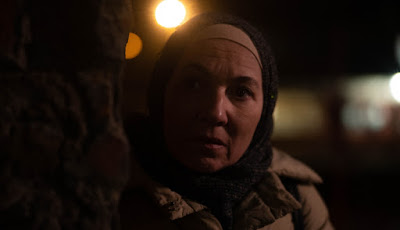 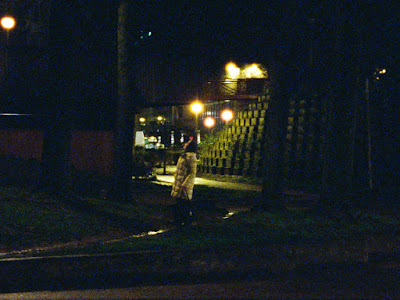 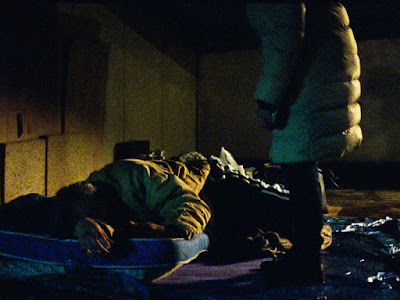 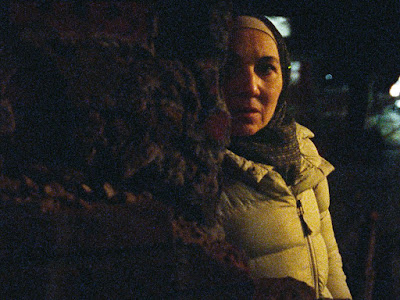 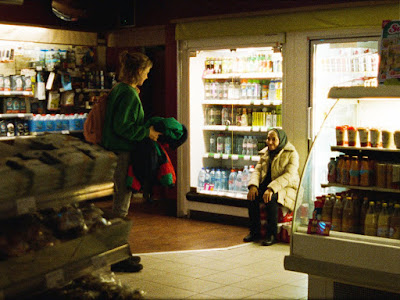 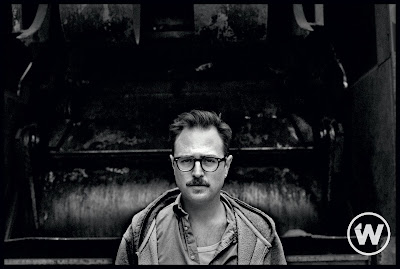 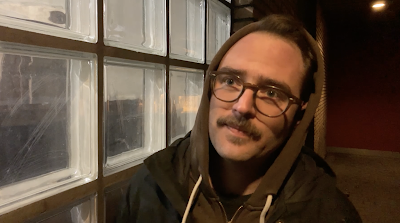 Filming on the streets with Saadia Bentaïeb

But if suddenly, a stranger appearing from nowhere were to enter this room, what would he see, what would he hear?  And would he feel anything by being here?
―whispered opening question

A unique film experience premiering at Director’s Fortnight at Cannes, a small film that envisions things differently, eschewing any formal narrative, but simply evolving out of circumstances, falling asleep on the last running subway train at night, waking up at the end with no money to get home, as we watch a middle-aged woman take a nocturnal journey through time, making her way on foot as she traverses the city of Brussels one night, becoming that rare film that doesn’t reveal what it’s about, as there’s no real storyline, just chance encounters, allowing viewers the luxury to contemplate for themselves their own thoughts on what they’re watching.  Something along the lines of the Chantal Akerman film TOUTE UNE NUIT (1982), who according to the director is the most famous director from Belgium, where her influence is unmistakable, as the film unravels at its own pace, becoming an observation piece filled with minute details, yet by the time it’s over, viewers are intimately familiar with Khadija, Saadia Bentaïeb from 2017 Top Ten List #8 BPM (Beats Per Minute (120 battements par minute), a quiet and humble Muslim woman who works as an afterhours cleaning lady for some nameless corporate entity.  Shot on 16mm by Grimm Vandekerckhove, the static opening shot of a living room held for several minutes holds little interest, yet the duration allows us to notice the darkening night, making viewers acutely aware of the passing time.  The empty streets have a glow about them, wet from the cool night air, she wears an overcoat as we hear her steps, with no traffic whatsoever to contend with, but she’ll occasionally run into someone, like a security guard allowing her inside a closed shopping mall to use a cash station after hours for a taxi, but she has insufficient funds, leaving her near broke and alone, and a long way from home.  A haunting and hypnotic journey begins in the southeast of Brussels to Molenbeek, traversing all the way across town to the Northeast.

Among her initial encounters is stopping at an old building, peeking inside through the windows before being approached by a neighbor.  Apparently she worked as a cleaning lady for a family that used to live there, but the building has been vacant for years now.  The neighbor, apparently relieved that she’s not an intruder, confesses he’s currently unhappy with his Polish cleaning lady and expresses an interest, but she’s already got a job.  The brief episode, however, accentuates the curiosity that her presence brings, quickly alleviating growing fears when encountering a total stranger in the dead of night.  As she moves further on, she grows concerned at the state of a homeless man lying inertly on an old dirty mattress on the street with his dog tethered to a pole.  When he doesn’t respond, she alerts a nearby policeman who calls the emergency paramedics who transport him to the nearest hospital.  Concerned about his welfare, and that of his dog, she sticks around until he’s taken away, with the officer suggesting the man could obtain his dog the next day so long as he remains securely tied.  In this day and age, it’s rare for anyone to demonstrate benevolence or compassion for the homeless, with city dwellers growing callous, largely because some urban areas are overwhelmed by the staggering numbers (Homelessness in Brussels continues to rise), making it difficult to choose who among the many to assist.  Nonetheless, it quietly offers a glimpse of Khadija’s values.  Taking it further, she visits a hospital to check up on him, gets scolded for arriving outside visiting hours, then knowingly sneaks up several floors, asking a nurse to find out what happened to him, disheartened at what she discovers.  Thoughts immediately turn to the dog, with an abstract illusory dreamlike sequence suggesting a release from captivity.

Quietly spare guitar interludes by Brecht Ameel are played between vignette sequences as she continues to walk through an urban landscape of dimly lit streets and storefronts, while occasionally the sounds of birds intrude, yet the film is deliberately undramatic, consisting of the kinds of characters you’re likely to meet on a day to day basis on the street but never stop for a moment and actually see them, usually walking right on by.  But Khadija’s circumstances are different, as time expands, filling the vacuum of space between the screen and the viewers, where people are constantly adjusting their views on what they’re seeing, an odyssey into the night, dense and dark, moody, but never gloomy, perhaps surprised by the openness she brings in a beautifully restrained performance of what amounts to an unscripted one woman play.  Along the way there are passing cars and dots of light that fluctuate in the night air, creating a kaleidoscope of colors that are simply fleeting images.  What we see is not the typical tourist views, away from the well-lit modern features and beautiful architecture, passing instead through well-worn working class sections of town where most all of the businesses are closed, yet a few bars with party revelers are punctuated by the floating sounds of music.  Discovering a late night gas station still open, she warms herself inside, getting a cup of tea, but they’re out of teabags, asking the store clerk to find something in the back which she happily provides.  As she’s the last and final customer, looking weary, obviously using the store as a rest stop along the way, the store clerk (Maaike Neuville) offers her a ride home in her car just after closing, a kind offer that she accepts, engaging in brief conversational small talk, when remarkably she sees her daughter on the street, asking to quickly stop, getting out, but avoids being seen, where she’s actually able to watch from a distance, observing the early flirtations of a budding relationship, with her beautiful teenage daughter (Nora Dari) unaware she’s being watched.  It’s a lovely moment, unremarkable yet poignant, as she never reveals herself, eventually finding her way back to the safety of her home.  Yet that’s not the end of the journey, as a brightened image of her daughter at the beach appears on the screen as a final thought, a break from everything that came before, but clearly at the forefront of her mind, closing on a positive note.  The final end credits are unusual, featuring the job titles for everyone involved on the film with the names missing, then one-by-one the names fill in the blanks on each passing page.
Posted by Robert Kennedy at 12:03 AM