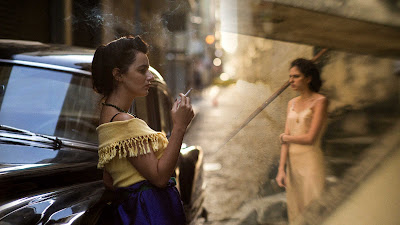 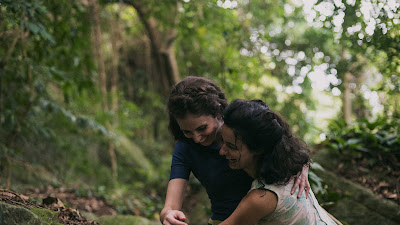 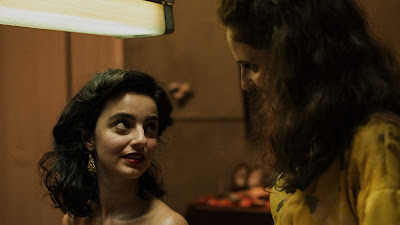 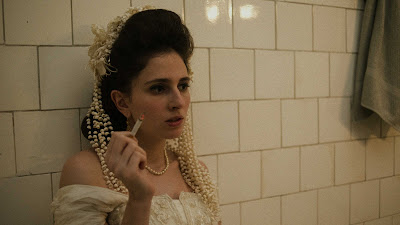 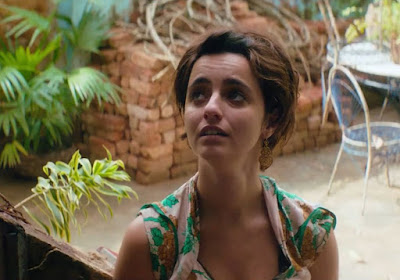 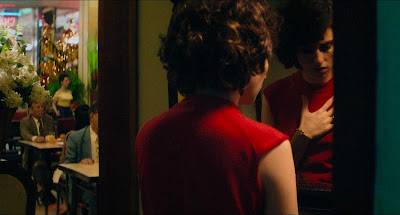 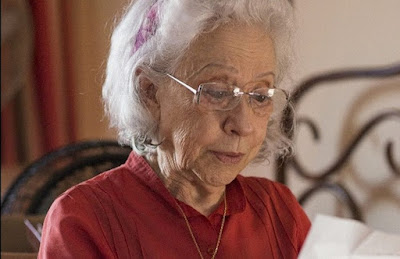 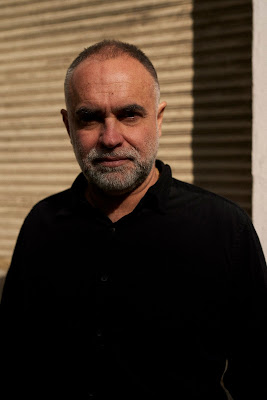 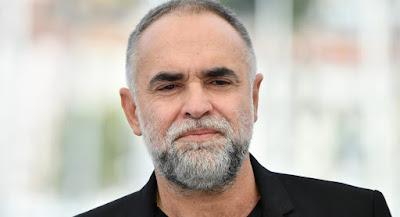 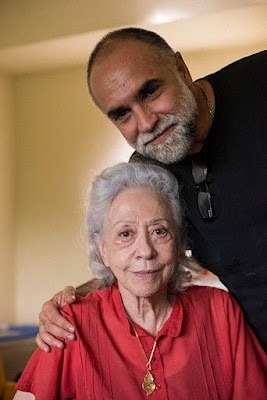 Aïnouz, who directed the unconventional MADAME SATÃ (2002) about the anguishing life of a drag queen which won the top prize at the Chicago Film Festival that year has also directed The Silver Cliff (O Abismo Prateado) (2011) and Futuro Beach (Praia do Futuro) (2014), all films expressing vividly detailed characterization and rich visualization, has made a period film set in the 50’s about the condition of women in a nation infested with sexist attitudes, using a classical style of filmmaking reminiscent of Italian films in the 50’s and 60’s, particularly the explosively powerful performances of Anna Magnani working with Rossellini, Visconti, or Pasolini in MAMMA ROMA (1962), which feels like fertile territory for this director.  Winner of Best Film from Un Certain Regard at Cannes, dubbed a “tropical melodrama,” this highly stylized film has a novelesque scope, like something akin to Fassbinder or Douglas Sirk, adapted from the 2015 novel by Martha Batalha entitled The Invisible Life Of Eurídice Gusmão, interweaving remarkable stories of quiet celebration that women lead away from men, whose cruel indifference and feeble narrow-mindedness has squashed any value or real meaning in their lives, relegated to a “history of invisibility.”  Given that Brazil is one of the countries in the world with the largest number of single mothers and crimes of violence against women, this film offers a particularly potent message to Brazilian women, which is exceedingly relevant now, given the ultra-racist, homophobic and misogynistic views of Brazilian President Jair Bolsonaro.  Arguably the best Brazilian film seen in decades, ravishingly beautiful, literally saturated in the lush imagery of cinematographer Hélène Louvart with a positively elegant classical score from Benedikt Schiefer, along with luxurious piano passages from Liszt, Grieg, and Chopin.  The film opens in Rio de Janeiro, 1950, with such idealized hopes from inseparable sisters Eurídíce (Carol Duarte) age 18 and Guida (Julia Stockler) age 20, seen sitting by the shoreline on the edge of a tropical forest overlooking the bay.  Brimming with the confidence of having their whole lives in front of them, Guida races up the hill barefoot, rebellious and free, while Eurídíce trailing behind gets lost in the incredible sensuality of the setting.  Living in the comfortable home of their parents surrounded by tropical trees, with a strictly conservative father Antonio (António Fonseca) and quietly submissive mother Ana (Flávia Gusmão), Eurídíce dreams of becoming a conservatory-trained pianist in Europe while Guida dreams of love.  Their parents on the other hand dream of marrying them off as quickly as possible in order to alleviate expenses.  Their home life is busy yet happy, especially the thoroughly enchanting music Eurídíce plays on the piano, amusingly claiming she simply can’t make her hands stop to come to dinner.

Expanding the coming-of-age saga into more mature years, Guida sneaks out of the house to attend a party, meeting a Greek sailor that whisks her off her feet, eloping with him to Greece in grand style, discovering a cadre of women there just waiting for him, discovering only after she’s pregnant what a lying cheat he is, dropping everything and returning back to her home where her still irate father fumes with resentment, disclaiming her as a daughter before kicking her out of the house just moments after she arrives, sending her searching through the alleyways for shelter, but she’s an enterprising young woman, able to stand up to challenges, even the most difficult.  She begins writing letters to her sister, sent through her mother who she suspects will read them, hoping they find their way to Eurídíce who she’s been told is studying in Vienna at a music conservatory.  The letters are filled with effusive praise, but also an adoration for her absent sister who she longs to see again, not revealing much about her own life, just excited to reconnect with her younger sister.  The letters, a poetic device also used in Alice Walker’s The Color Purple, reveal interior territory for Guida, who continually gets no response, while the gorgeous piano playing heard throughout the film allows an interior pathway inside Eurídíce’s secret world, as she never left for Europe, instead performing the dutiful daughter routine, marrying a man suggested by her father, Antenor (Gregório Duvivier), the smug and excessively dull son of a business partner, much like her father, sacrificing her dreams for the good of the family, seen brutalized on her wedding night, which apparently gives her husband the legal right to violently rape her.  This kind of raw physicality is altogether missing in classic American melodrama.  Guida meanwhile is seen working the bars for tips and sexual favors, with both quickly getting pregnant.  While Eurídíce hopes it doesn’t interfere with practicing for her conservatory entrance examination, but it clearly does, forced to spend her time performing menial housework duties, cooking and cleaning up after others, leaving her little time of her own, quickly losing focus on the difficult Liszt rhapsodies she’s trying to learn, Liszt Hungarian Rhapsody no.2 P.1 - YouTube (4:11), played by Russian-American pianist Olga Kern, and Liszt Hungarian Rhapsody no. 2 P 2. (7:43).  Her career hopes shattered, caught in a loveless marriage, the future she envisioned is of little consequence to the two men that matter the most, her husband and her father, where her emotional connection to the piano means nothing whatsoever to either one of them.  Guida, meanwhile, has one of the most wrenching birth scenes imaginable, seen returning to the bar the very next day in one of the most remarkable transitions, an unforgettable scene that reminds us just how much women endure.  In a patriarchal society, the fate of both women has been decided by their father, a cruel man of no imagination, who only thinks of himself, caring nothing at all for the hopes and aspirations of his daughters.


Guida’s letters form the narrative centerpiece of the film, each one of them dated, forming a time line for viewers, perhaps growing more desperate over time, never once hearing a response, yet retaining her devotional love and admiration, if only to remind herself that her sister exists.  These letters are a crushing indication not only of what’s missing, but what’s been lost in their lives, as each has been led to believe by their father that the other is a huge success off in Europe somewhere and can’t be reached, even though they’re living in near proximation to one another.   A scathing critique on how men treat women, with both sisters forced to make decisions against their will, the lofty dreams at the outset have been reduced to the tiny spaces of their lives, with Guida inhabiting a backwater shack with an older women named Filomena (Bárbara Santos), living in a distant black and impoverished community, a sharp reminder of the racial class differences that still define Brazil, while Eurídíce, the victim of an arranged marriage, continues to slave away for her husband and child, neither of whom she asked for, eventually excelling in that sought-after conservatory entrance exam, even though it no longer matters, never receiving an ounce of support from her husband, whose response to her success is to grow angry and enraged, yet it’s a rare personal moment to treasure, triumphantly expressed by the music of Chopin, Chopin-Etude no. 9 in F minor, Op. 10 no. 9 - YouTube  (2:05).  Undiminished by the stifling male repression surrounding them, the spirited independence of both woman is relentlessly on display from the outset, their bond unbroken, enveloped by a deep love and respect, even from afar, with both women exuding strength in the face of weakness.  The actresses are remarkably assured in their roles, as are the secondary characters in this densely plotted, almost dreamlike narrative that continually offers its share of surprises.  Metaphorically speaking, this Eurídíce of the Greek myths, who never found her Orpheus (though it’s clearly in the music she loves), remains locked inside a hellish purgatory forever, with music providing no means of escape.  Guida does develop a profound sisterly relationship with her friend Filomena, who was there when all others abandoned her, writing in one of her many letters that “Filomena is my mother, my father and also my sister,” leading to a curious family encounter, a near-miss occurring on Christmas Eve, the time families spend together, where Guida and Filomena are barred from entering a posh restaurant, yet they briefly enter anyway at the same time Eurídíce is there with her father, but in the rest room, with their two children mingling in the center, mesmerized by a giant fish aquarium before exiting, a beautifully observed scene with haunting significance.  The film jumps ahead 60-years to a final coda, with Eurídíce transformed into the great Brazilian acting legend Fernanda Montenegro at 89-years of age, alone in her thoughts, surrounded by family and friends, becoming a heartbreaking sequence with a cleverly seductive finale that thoroughly encapsulates the depth of discovery in this extraordinary film.
Posted by Robert Kennedy at 12:06 AM