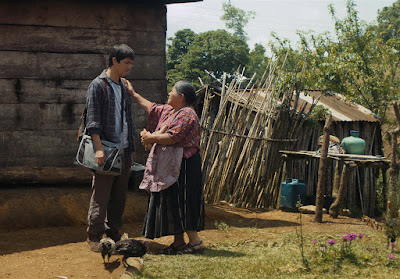 This film has the distinction of being the first Guatemalan film to ever screen at the Cannes Film festival, winning the Camera d’Or as best first feature, while also picking up a screenplay award in the Critics’ Week section, and while what’s presented is fictionalized, it reveals the painful cost of the nation’s own history, uncovering the trauma left behind from the 36-year Guatemalan Civil War, which largely targeted and massacred the indigenous Mayan population.  While the film doesn’t get into the origins of that war, much of the blame can be traced to the United States, as this was the site of one of the first black operations by the CIA in 1954, which feared a communist expansion that might affect their United Fruit Company banana trade (thus the term banana republics) which they operated since the turn of the century without compensation to the country, building rail and electricity lines to export the goods out of the country, selling primarily in America and Europe.  What they found instead was a Revolutionary Action party that won 85% of the vote implementing land reforms, minimum wage laws, increased educational funding and near universal voting rights (illiterate women were still excluded), while also asking for compensation for everything foreign interests had seized.  Despite these rather modest gains, the United States viewed this as a threat, with the CIA installing a right-wing Guatemalan General in a coup d’état, quickly overturning decades of social and economic reforms, banning labor unions and left-wing political parties, essentially disenfranchising the 85% majority of left-wing Guatemalans, returning all the confiscated land to the United Fruit Company.  A series of fraudulent elections followed where only military personnel were allowable candidates, where a US-backed dictatorship initiated a ruthless hate campaign targeting Guatemala’s indigenous population, which was more than half the population, but they owned no land, as it had been confiscated in the late 19th century by Guatemala President Justo Rufino Barrios and distributed amongst the military officers, a practice that continued well into 1960 when an unsuccessful revolt was led by left-wing junior military officers, who fled to the mountains and eventually aligned with Fidel Castro’s Cuban revolution.  The CIA responded by bombing rebel bases and using Guatemala as a training grounds for the failed Bay of Pigs invasion of Cuba.  When left-wing guerilla forces attacked the offices of the United Fruit Company, provoking sympathy worker strikes and student walkouts, the government crackdown initiated what turned out to be a long and protracted civil war that only ended in 1996 with the help of a United Nations intervention.  Now widely regarded as an unjust war, founded on genocide and greed, fueled by a racist antagonism towards indigenous peoples, some 200,000 lives were lost with an additional 45,000 still missing, yet this genocide was largely underreported, as 83% of those killed were indigenous Mayan Indians.

Even after all these years, Guatemala is still coming to terms with their own nation’s history, establishing truth and reconciliation committees to uncover the truth about what happened, as was similarly shown in Abderrahmane Sissako’s film BAMAKO (2006) taking place in Mali’s capital city of Bamako, putting war criminals on trial, publicly recording and documenting all eye witness testimony, which largely consists of surviving widows of the dead, most of whom were themselves arrested and repeatedly tortured and raped by the government’s military forces.  This film honors and pays tribute to those women, even as they are digging up the bones of their family remains in unmarked mass grave sites littered across the country.  Ernesto, Armando Espitia from Amat Escalante’s Heli (2013), is a forensic anthropologist assigned to one of the mass grave sites, where he along with others perform the painstakingly slow task of excavating the dead bodies, identifying and then carefully reconstructing the bones while informing the families.  At the same time, they are recording new eye witness testimony, so it’s a multi-faceted process all conducted by a small group of scientists working for the Forensic Foundation.  Ernesto is moved by the testimony of an elderly indigenous woman named Nicolasa (Aurelia Caal) whose husband was tortured and killed for offering food to rebel soldiers, leading to yet another unmarked mass grave site, but what she also provides is a photograph of a rebel leader that closely resembles his missing father.  Startled by this revelation, he immediately drops what he’s doing and makes an unauthorized visit to the gravesite, only to be stymied because it happens to be on private land.  Without a warrant, he has no right to start digging on someone else’s property.  Irritated at this setback, he runs into trouble with his boss, as the reputation of the company could have been compromised by his reckless behavior.  Yet this slight crack reveals an opening into his past, which he seems driven to learn more about, while his mother (Emma Dib), seems less inclined to reopen old wounds.  The use of two Mexican actors may be viewed as troubling to some, as their Spanish dialect is not the same as how Guatemalans speak, challenging the prevailing authenticity of the film, yet so few people around the world would actually notice the difference.  Still, those in Guatemala can tell, a nation without a burgeoning movie industry to pull actors from, relying instead largely on non-professionals, including the indigenous women portrayed in the film who are actually revealing the stories of their lives, giving the film a uniquely compelling interest and the intimacy needed to make it feel true.

Nuanced and humane, the film’s strength lies in its ability to capture the shared trauma of how survivors and later generations deal with the aftermath of war.  In this case, with so many husbands and fathers dead or missing, it is the women who are left to carry this burden.  The film alternates between an examination of Nicolasa’s village and Ernesto’s own family, each with their own startling revelations, yet it is the women who are ultimately entrusted to tell their stories, which serves as a healing process for a nation’s collective trauma.  In Nicolasa’s village, for instance, all the women were victims of rape, genocide, and an unfathomable violence that no one wanted to hear literally for decades.  As survivors, they are the keepers of history, bearing witness to events that have been forgotten by time.  But as indigenous women, their own cultural history has also been ignored by the rest of the world.  This film eloquently gives these women a voice, and an elevated cultural significance, dressed in their finest, where the colorful hand-stitched traditional clothing, hats, and hairstyles are a remarkable visual presence and a stark contrast to the morbid imagery associated with gravesites.  Yet this excavation activity all takes place under their watchful eyes, silent and solemn, but bearing witness.  This film also raises another interesting question, unforeseen and rarely discussed, and that is the generation of children born out of these systematic rapes, none knowing their own fathers, many led to believe fictitious tales to protect them from the truth, yet they are a central part of this story, a product of genocide.  While not easy to talk about, this public, post-war airing may open doors and help clear the air for many of them who have been living with these dark secrets for years.  It’s a hard concept to grasp, and even more difficult to personalize, yet this film offers solace and respect.  Another important consideration is that these woman, through the art of film, had to re-live the horrors of their lives, and do so while facing a camera, which is foreign to indigenous culture.  Yet perhaps the moment of the film is when a succession of indigenous women stare silently into the camera, one after the other, each given the dignity they finally deserve.  If we learn anything from this film it is to respect the voices of the survivors, as they will forever be haunted by both the living and the dead.  In the end there is no justice, no compensation, nothing that can justify how brutally these women were violated and what was murderously taken away from them.  All these women were betrayed by their own government, yet to them this comes as no surprise, as they’ve lived with that all their lives and throughout their own history.
Posted by Robert Kennedy at 12:02 AM