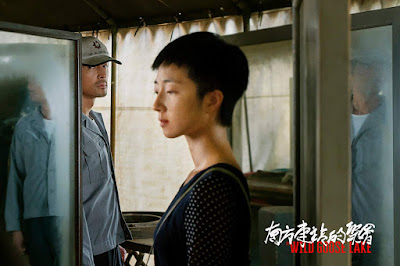 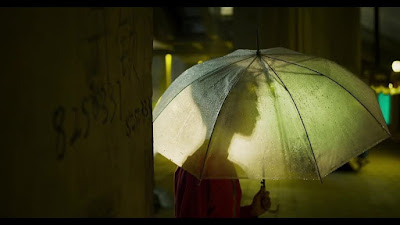 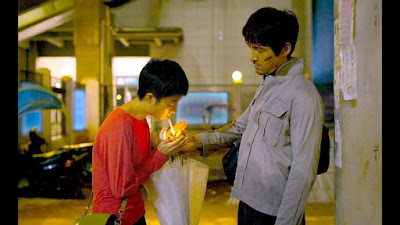 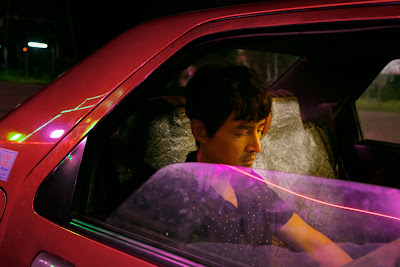 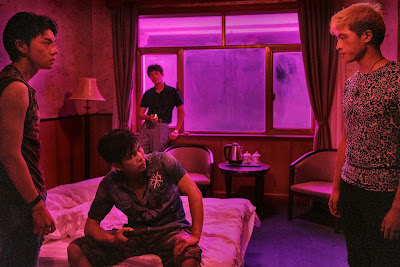 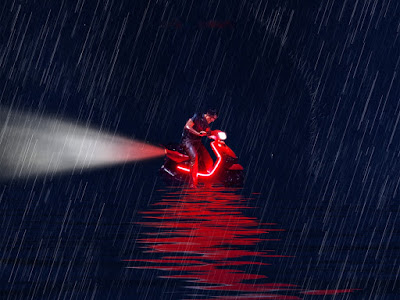 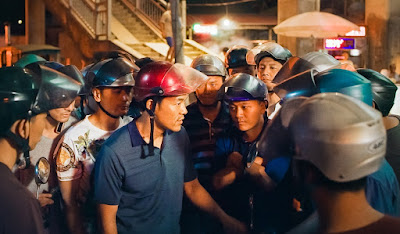 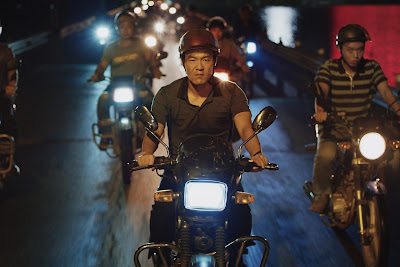 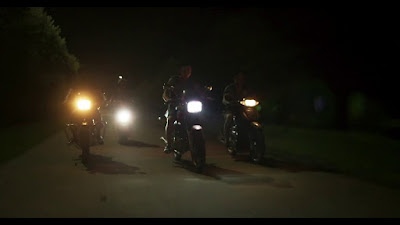 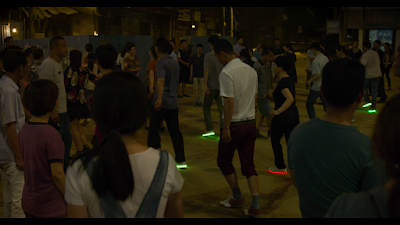 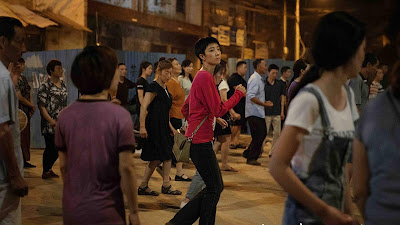 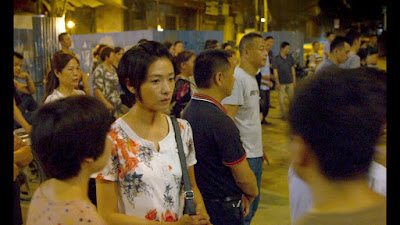 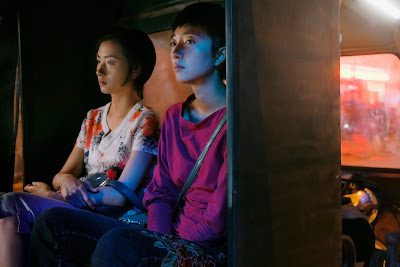 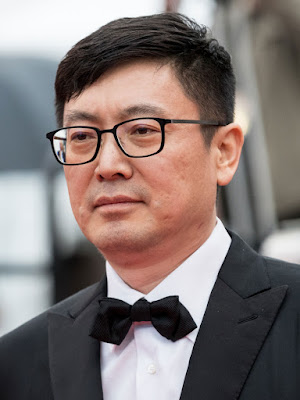 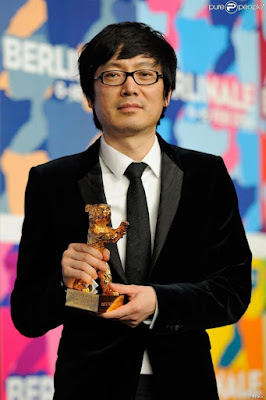 The long awaited follow-up to Diao Yinan’s Black Coal, Thin Ice (Bai ri yan huo) (2014), a wintry film noir that took place in the northernmost icy region of China bordering on Russia, while this takes place in the sweltering heat of Wuhan Province in central China, feeling more like the lush, tropical setting of Wong Kar-wai, with the constant rain, neon colors, and noirish aesthetics producing haunting images of rare beauty, much of it due to cinematographer Dong Jingsong who also shot Bi Gan’s Long Day's Journey Into Night (Di qiu zui hou de ye wan) (2019).  More of an open tribute to genre films, with the title emblematic of “a wild goose chase,” this heavily stylized film features plenty of action in an ultra-moody, hyper-violent gangland thriller, much of it told in flashback, more often than not producing unexpected results, becoming something of a crowd pleaser.  At the outset, under a torrential rain, Zhou Zenong (Hu Ge) is a man alone at a railway station, on the run from police, smoking a cigarette while waiting under the overhang until a mysterious woman arrives, Liu Aiai (Gwei Lun-mei), asking for a light.  This existential backdrop immediately sets the stage for film noir territory, kicking in an obligatory flashback sequence, yet it’s the last time anything will be remotely clear in this visually extravagant cops and robber caper.  Recently released from prison, the tight-lipped Zhou finds himself in a hotel basement meeting of rival motorcycle gangs discussing how they’re dividing up the territory, which gets hotly contested by the volatile Crazy Cat Brothers, breaking out into a fight, where a temporary truce is established, but only on the condition that the opposing sides accept a challenge, whoever steals the most motorcycles in a set period of time is declared the winner (“an Olympic Games of theft”) and awarded the coveted territory in dispute.  Unbeknownst to Zhou, the Brothers cut a deal behind the scenes and sabotage Zhou’s gang with a surprise attack, turning into a demolition derby of swerving motorbikes, decapitating one of his riders, chasing Zhou down as well, trying to kill him, but he accidentally kills a cop while evading the chase, making him the target of a nationwide police manhunt.  Liao Fan, from the director’s earlier film and Jia Zhang-ke’s Ash Is Purest White (Jiang hu er nv) (2018), plays the Police Chief, seen in a room filled with cops drawing up his capture strategy (mirroring the outlaw convention), with cops initially posing as a motorcycle gang, but who are they fooling?  The underworld also joins the chase, hoping to collect the sizeable reward, yet the confounding aspect is that the outlaw claims he wants to turn himself in so his estranged wife Shujun (Wan Qian, aka: Regina Wan), who he hasn’t seen in five years, can get the reward, yet his hellraising Billy the Kid instincts say otherwise.
In what is largely a slow-paced film, the director ratchets up the adrenaline in the high-speed action scenes with a flurry of frenetic violence, yet the plot is cluttered with continual side trips that can feel distracting, delving into contending rivalries from secondary characters, never really developing the lead characters, who remain isolated and aloof, without much insight into their past history.  While kind of an underwhelming, one-note screenplay, the set design is extraordinary, finding shabby, dilapidated sites with crumbling rooms in a deteriorating bi-level apartment complex, back rooms of grungy restaurants, street vendors with a lone lightbulb hovering over their darkened stalls, or a room covered in newspapers and old photographs that seem to come to life, adding elements of originality that are tastefully inserted into this murky atmosphere of lingering chaos.  Zhou is laying low, needing a bullet removed from his shoulder (bleeding profusely throughout the entire picture), giving him time to contemplate his fate, yet despite his long absence, Zhou is thinking of the family he left behind.  Shujun, now raising a son, is unsure she really wants to get dragged back into his world again, harassed by police every step of the way.  When Liu Aiai convinces her to meet her husband in a public place, there are so many plain-clothed cops in the vicinity that every single person you see is suspect, erupting in pandemonium and violence, where they have to abort the plan and are lucky to escape unharmed, with Shujun refusing any more cooperation.  She is replaced by Liu Aiai, who has a history at Wild Goose Lake, where Zhou has retreated, as it’s a crowded tourist attraction where she works as a “bathing beauty,” slang for prostitutes on the beach in oversized wide-brimmed straw hats that take their customers out into the water for pleasuring.  The Chief gets word Zhou may be hiding there, organizing a large tactical unit, scouring the area with cops in civilian clothes who are stationed in every nook and cranny on the street, leaving little avenue for escape.  While it gets a bit ridiculous, considering Zhou is ostensibly trying to turn himself into police, and there is nowhere to turn where their presence can’t be seen, yet he hesitates, apparently thwarting even his own plans.  What’s uniquely different here is that there’s not even any pretense of romance, as that never enters into the picture, so any idea of a traditional femme fatale gets lost in the shadowy intrigue, as Liu Aiai is little more than a messenger, a go-between sending messages to the crime boss on the run, where he remains the central figure, occasionally exploding into action on a moment’s notice like a comic book super hero, undeterred by his injury, holding his own against a stream of pursuers, leading to plenty of close calls, but continuing to avoid detection.

The fictitious Wild Goose Lake is considered gangland turf, so when the police infiltrate, there’s really little difference between them, as both represent an absence of morality, where fabricating lies or utilizing betrayal tactics are all too common, with both sides resorting to underhanded tactics, becoming a metaphor for moral rot, with pervasive lawlessness and shifting loyalties.  Interesting that in nearly all these settings a small TV can be seen in a corner of the room broadcasting the State news network, which includes regular updates on this police manhunt, even a planted story about the outlaw’s pregnant girlfriend, anything to draw him out into the open, though nothing seems to work, restricted to only moving at night, yet he continually slips past checkpoints.  With the camera following his every move, he’s highly adept at avoiding detection, continually briefed by Liu Aiai, including a poignant scene between them in a canoe on the lake late at night, which plays out like a calm before the storm.  The picture of China is one of pervasive criminality, where every storefront dive or food stall is a cover for police surveillance, offering a threat of imminent danger, where no one is safe from being a target.  In a world of constant betrayals and double-crosses, we never know who’s aligned with who in this constantly shifting moral void of deceit, where organized crime and law enforcement are one and the same, where everyone is viewed with suspicion as a potential threat to the state, all part of the excessive government overreach that dehumanizes the population.  God knows how many innocents were caught in the crossfires of this film, but no one seems to care.  The depiction of life on the margins in China is an unbroken pattern of betrayal and undermined aspirations, with nothing left to hope for, as all avenues are closed.  Fatalistic to the core, yet the director’s flamboyant visual style is on display, arguably the closest Chinese director to the Westernized standards of Hollywood, he takes B-movie elements and injects them with an arthouse sensibility, creating testosterone-driven shoot-outs that grow absurdly violent, especially given Zhou’s bleak circumstances, yet he has a tendency to rise from the dead with an explosive force of his own, veering into Takashi Miike territory, especially a cop impaled by an umbrella, blood splattering everywhere, where moments like this are the real driving interest in the film, contrasted with the supremely ridiculous music video image of dancers with neon-lit soles on their feet enjoying themselves at an outdoor dance party, all in choreographed formation to Boney M’s “Rasputin,” Boney M. - Rasputin - YouTube (4:43), until gunshots ring out and everyone scatters.  Arguably an exploration of toxic masculinity in such a patriarchal society, the opportunities for women are nonexistent, with Liu Aiai longing to escape her dead-end existence, Shujun is slaving away in a factory, where there is little sign of escape or independence, which is why the ending comes as a complete surprise, almost fairy tale in nature, as if the sun has finally come out, becoming an absurdist tale, finding optimism in the ashes of broken dreams.
Posted by Robert Kennedy at 12:04 AM