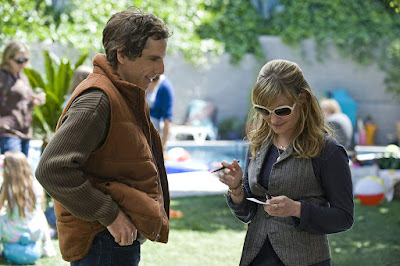 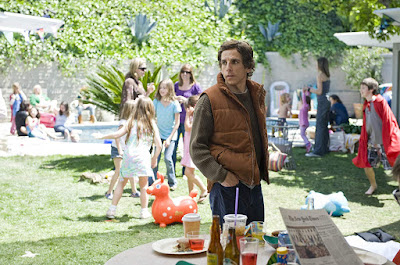 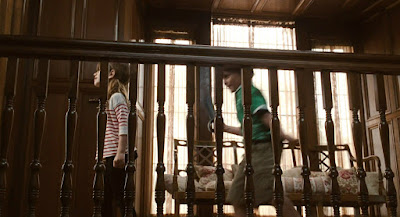 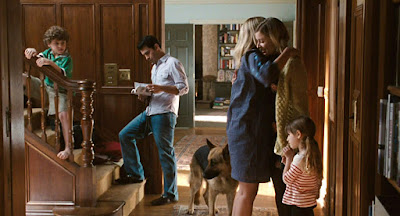 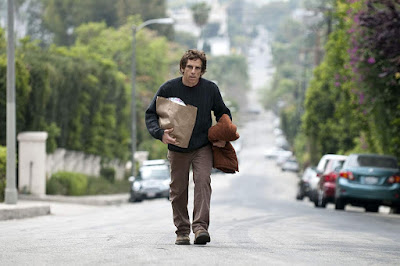 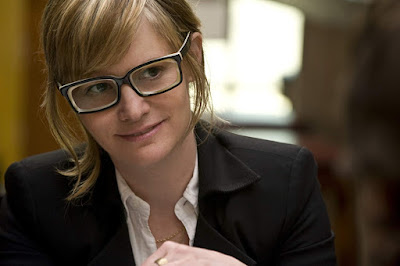 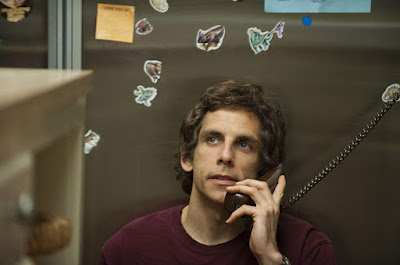 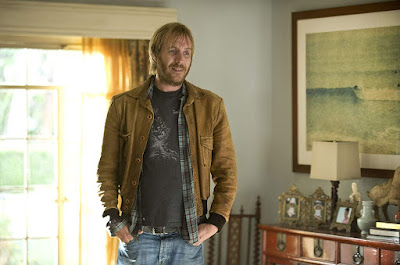 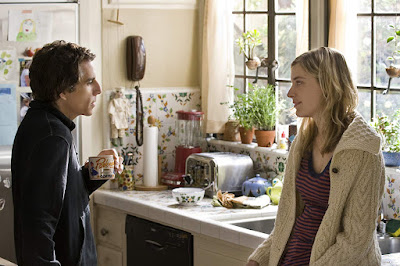 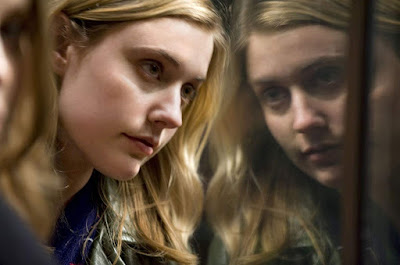 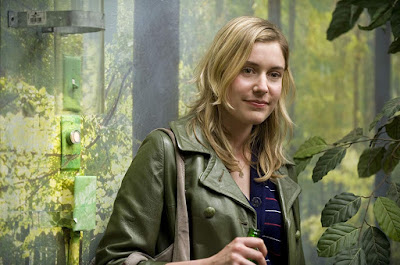 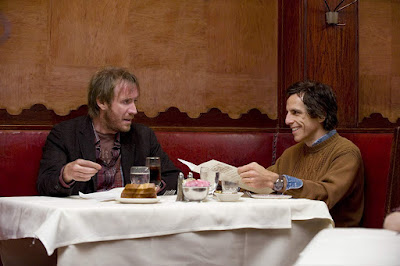 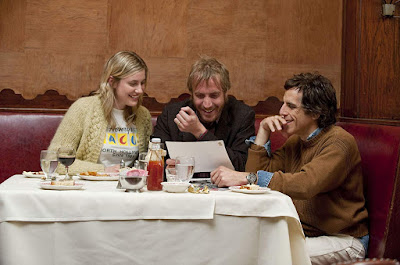 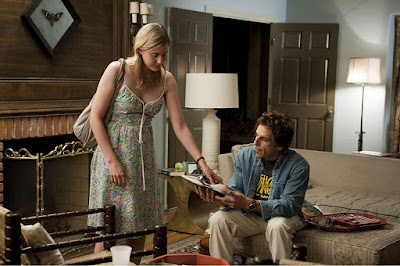 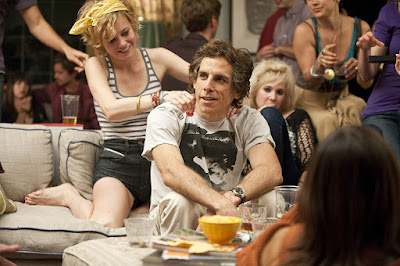 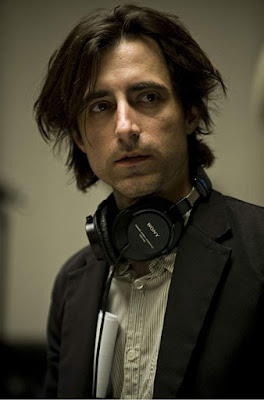 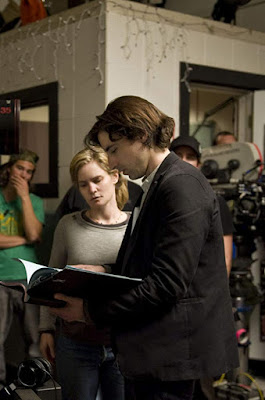 From the opening pan of Los Angeles covered in a blanket of smog, we know we’re in for something ugly, something oppressive, a world full of obnoxious people that’s likely to make us want to bolt for anyplace else on earth.  That’s pretty much the feeling of this movie, only we’re stuck inside the mind and body of an aggressively self-centered and painfully obnoxious Ben Stiller for two hours, which is a horribly uncomfortable place to be, as it must be for him as well, as we learn he was just released from an East coast psychiatric hospital.  Another smart and brilliantly written sketch of life from Baumbach, whose films are always among the best edited in the business, that’s not so much a story as an observance of the kinds of cruelties humans inflict upon one another.  A dour and unfunny Stiller really pulls this occasionally funny and otherwise incisive satire on the aimlessness of the middle class down, as he’s as unlikable a lead as you’re going to find, where his uncomfortableness with himself makes us feel equally squirmy, but in an unusual twist, we’re initially introduced to the family of his brother just as they are about to leave for a 6-week vacation in Vietnam.  Overly demonstrative, barking out orders and instructions for their “personal assistant” Florence, the always spacey Greta Gerwig, we’re immediately getting our fill of the rich and self-demanding.  After they leave, Stiller arrives, seemingly in a mental fog, a guy that appears to have plenty of issues to sort out, most of them within himself, yet he finds time to rattle off complaint letters to various corporations that he feels have forgotten the personal touch.  Stiller rambles about like a rat in a cage, a guy from New York who no longer drives, so is dependent on everyone else to take him wherever he needs, which falls upon Florence, who initially thinks he’s on a different wavelength than the rest of her friends, thinking that is somehow good, even as he treats her like the hired help.  Nonetheless, he gets in her pants just about from the moment he sees her, which seems to catch her off guard, discovering she may actually like the guy.

The film falls into the miserablist camp, as the overly judgmental Stiller is filled with self-loathing, but tends to take out his frustrations on others, occasionally freaking out in random moments of anger which feel more like panic attacks.  He’s a guy that’s trying to be someone other than who he is, but who’s still trapped by the idea that somehow he’s better than everyone else, even as he comes across as pretty pathetic.  He’s required to look after his brother’s palatial estate and take care of the dog, where both he and the dog require daily medication just to stabilize.  His single goal is to do nothing other than build a doghouse.  This film plays out much like a high school reunion twenty years later, as Stiller was part of a band just after college, which split up largely on his account, because he insisted on certain control issues that the record companies refused to budge on, so it was a deal breaker, one that left a sour taste in the mouths of the other band members.  Several have moved on, successfully, while others tend to linger in the resentments of the past, including his so-called best friend Ivan, Rhys Ifan, now sober, but living in a motel, separated from his wife and son, though still trying to work out a reconciliation.  Stiller continues to view him much as he did decades ago, as if time hadn’t changed either one, as if there are still unresolvable issues from their youth to work out instead of as a guy caught up in an ugly situation who might actually need a friend.  Stiller is incapable of being that friend or being that far sighted, as instead he continues to be completely self-absorbed with his own life and barely realizes others exist.  He treats Florence much the same way, attracted to her when he sees her, but is immediately revolted afterwards, as he can’t deal with closeness issues, so instead pushes everybody away with apparent disgust.

Greta Gerwig, who comes across like a young Chloë Sevigny, is easily the best thing in the film, as none of the miserable people that live in Los Angeles deserve her, as she’s a breath of fresh air in a city drowning in smog, where her naturalism in a sea of great pretenders makes her the special attraction.  Perhaps the best scene in the film is in a near empty bar where Florence is singing Shawn Colvin’s “There’s a Rugged Road,” Greenberg - Greta Gerwig singing There's a Rugged Road (2:33), and is astoundingly good, yet Stiller is oblivious to her talent or sensuality, which is nearly forced upon him by one of her friends (Merritt Wever from Nurse Jackie) as she stops by the bar, yet he ignores all roads that lead to somewhere.  Instead he insists on his existential path of “doing nothing,” which apparently is a lot harder to do than he realizes.  While calling Florence to join him at dinner, he then leaves her at the table to call another old college flame (Jennifer Jason Leigh), now married with kids, to ask her out.  Later when they meet, he inappropriately tries to stir up old flames that she doused years ago and nearly flees from the scene.  As Jennifer Jason Leigh is a co-writer with her husband the director, expressing some of the caustic anger accumulated at the end of a marriage (she filed for divorce by the end of the year, with Baumbach starting an affair with Gerwig shortly afterwards), she likely contributed to some of these scenes where women have to put up with so much garbage from men, who typically try to dump all their emotional baggage onto women’s shoulders, as if this is the role of women, which of course men routinely do without realizing what asses they are for doing it.  All of this leads to a giant out of control party scene where Stiller takes every inappropriate drug on the premises, from coke to Vicadin to alcohol to pot to some unnamed pills somebody puts in your hands before insisting they listen to Duran Duran, telling these twenty somethings why he finds them all such spoiled, miserable wretches who have done nothing to change the world, a performance earning him the nickname Mr. Sunshine since he is really such a complete grouch.  Nearly leaving it all for Australia the following morning, idealized as a great Kinks song, The Kinks - Australia (6:42), this must be the exact wish fulfillment fantasy every Los Angeles resident must feel when they wake up to yet another smog-filled day, as Stiller, by the way, never does get around to finishing that doghouse, as he’s too busy living in it himself.
Posted by Robert Kennedy at 12:01 AM