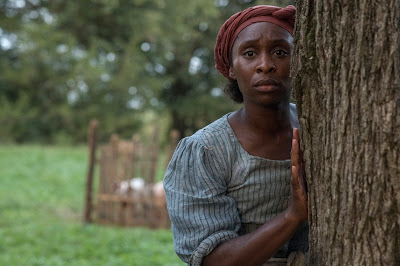 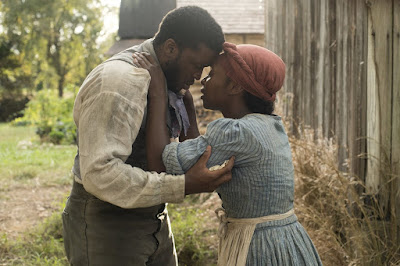 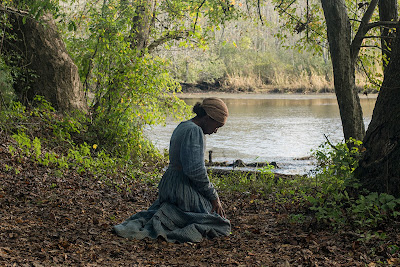 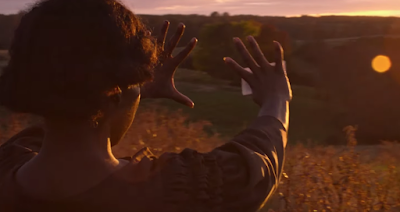 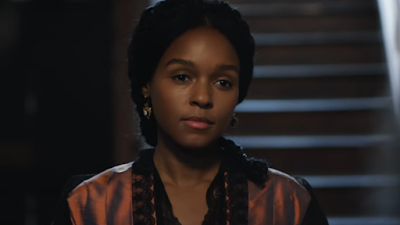 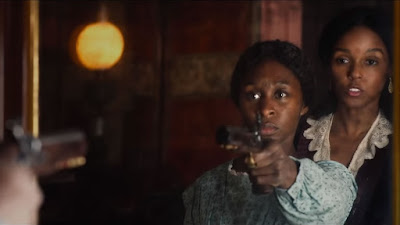 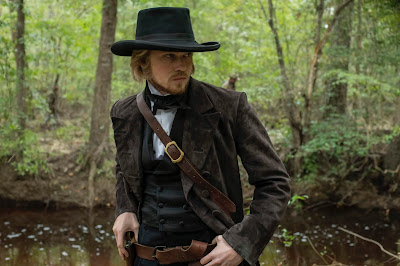 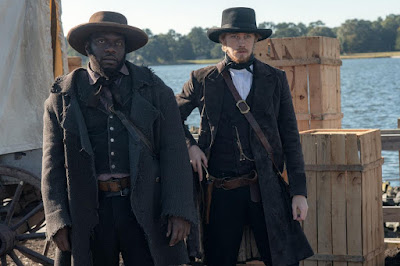 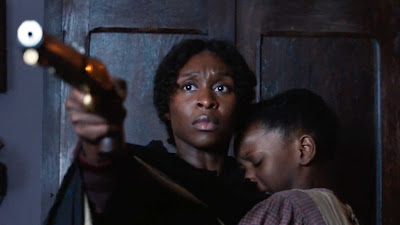 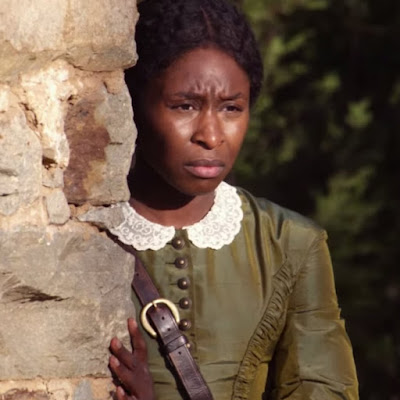 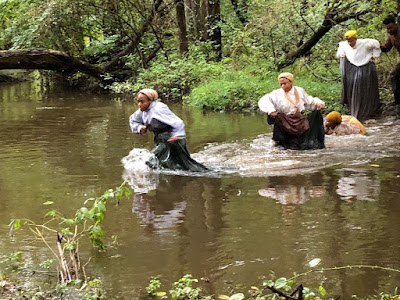 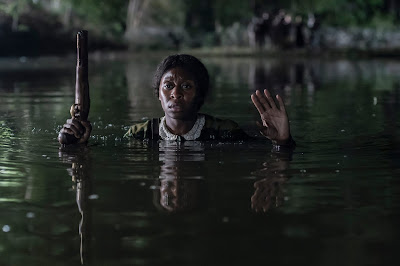 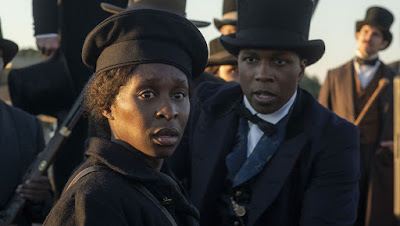 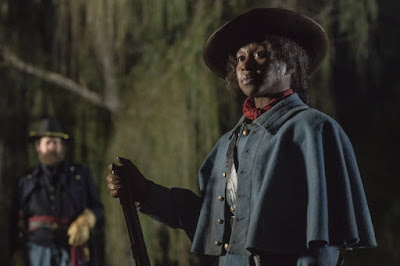 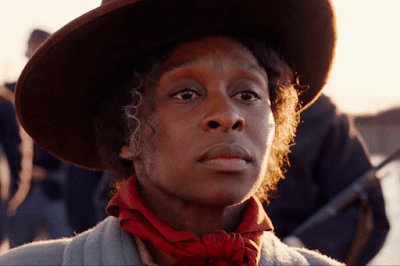 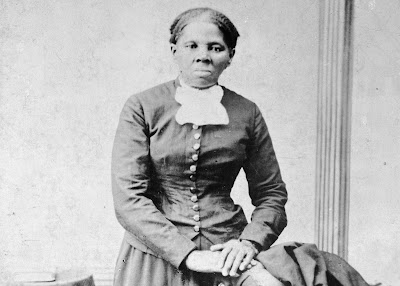 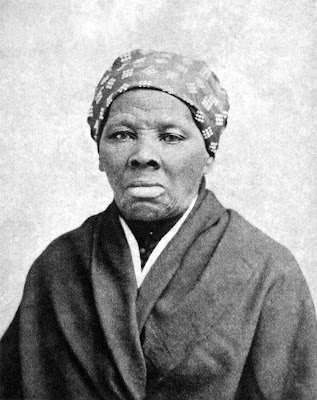 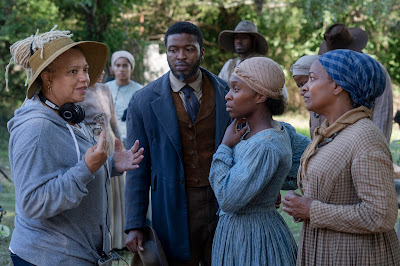 Director Kasi Lemmons (left) on the set with her actors

I had reasoned this out in my mind; there was one of two things I had a right to, liberty or death; if I could not have one, I would have the other, for no man should take me alive.
―Harriet Tubman

Since so much of what we know about Harriet Tubman comes from children’s books, this is told like a children’s story, or like an often mythologized fable, which is how her story has been handed down through the years.  Tubman herself was illiterate and never learned to read or write, so specific details about her life remain sketchy, as they are largely first or second hand accounts, so much of her life has already been fictionalized.  Adhering to admitted hero worship, this feels designed to be etched into the minds of school children who watch it in their classrooms, with blacks finally having a role model they can call their own.  But the problem is this isn’t a representation of history, instead it’s a saintly portrayal, accentuating the heroism, embellishing history by turning her into a superhero, like something out of Marvel comics, where her initial fight to freedom by running away from slavery on her own from Dorchester County in Maryland to safe protection in the north in Philadelphia simply defied all odds, but to turn around and do it over and over again (nineteen times), each time collecting additional family members and an assemblage of more slaves, and be successful at it time after time, never losing anyone along the way, eventually rescuing more than 300 slaves to freedom over a ten year period on what is now called the Underground Railroad, is simply a phenomenal act of heroism and courage.  Yet the formation of the Railroad, with its many network of friends and safe places, is underemphasized in this film, as Harriet prefers to go it alone, giving her Messianic attributes, using song to call out slaves from the fields, like a bonafide Pied Piper, where this is an example where legend prevails over reality.  Placing her trust in God, she defies the existence of slavery as a moral abomination, with the film minimizing the more barbaric aspects, though it remains front and center through the acts of a few vile white characters brazenly emboldened with white supremacy, namely the slave owners of her family who relentlessly track her down, along with an assortment of particularly brutal hired slave catchers (two of them black men, historically fabricated, claiming poetic license, with one eventually joining sides with her, accentuating the choice of good over evil), turning her into an American Joan of Arc character, threatened with burning at the stake if captured, yet similarly convinced of her religious convictions, displaying an ability to lead battalions into battle, as she did for the Union forces in the Civil War, proving that adversity can be overcome through moral strength of character and a righteous conviction of good over evil.  Using African mythmaking and oral traditions as a film style, this heroine actually possesses supernatural powers, suffering from spells where she remains inert, falling to the ground, unable to move, as if struck by seizures, yet she’s able to see visions shortly before they actually happen, something she attributes to God, though this may be the result of a skull fracture she suffered at the hands of an overzealous slave master.  What’s essential to understand is that she constantly risks death for the benefit of others, routinely accomplishing what others think can’t be done, becoming a highly influential figure in the nation’s abolition of slavery.

With British actress (with Nigerian heritage) Cynthia Erivo from Widows (2018) chosen to play Harriet, this created a backlash, stirring the waters of resentment, as Erivo has a history of controversial tweets aimed at belittling and mocking black Americans that many still find offensive, despite her contention that they were taken out of context.  Others have decided to boycott the film because the distributor Focus Features is owned by Comcast, a telecommunications conglomerate that may be violating the Reconstruction era Civil Rights Act of 1866 in bypassing the interests of black Americans in their programming, not only shunning black cable outlets but refusing to even consider race at all as a factor, questioning what constitutes fair representation, which is the subject of a current racial discrimination lawsuit (Supreme Court Hears Racial Discrimination Case Against ...).  In that same vein, some are outraged by the filmmaker’s choice to depict black slave catchers, with pretensions of being the best in all of the South, which is a complete historical fabrication, as they did not exist, yet the filmmakers are attempting to express the depths of corruption in the institution of slavery, where it was deeper than skin color, that the motivation of greed was so great that it could affect anyone.  Yet this undermines the historical narrative of how black men were actually victims of slavery, not the perpetrators of its violence.  By resorting to historical inaccuracies, Kasi Lemmons, the heralded black female director of such poetically rich films as EVE’S BAYOU (1997), also featuring a clairvoyant character, and TALK TO ME (2007), with Taraji P. Henson doing her own exaggerated Foxey Brown imitation, may have inadvertently continued the disturbing negative stereotype of the black male in movies.  But after all is said and done, it turns out Erivo is not the problem with the film, and is instead one of its greatest strengths, while the narrative is simplistic and all too predictable, leaving little in doubt, where we actually learn next to nothing about Harriet Tubman, never rising to the level of a Civil War epic, where the biggest surprise is the choice to use a formulaic and more conventional biographical structure, which is a 180 degree turn from her previous films, which distinguished themselves by taking great risks.  Maybe it’s a new era in filmmaking, where the fear of financing black history is considered too great a risk, with producers only wanting to finance what they consider sure winners, forcing the filmmakers to play to a specific target audience.  It feels like the same mistake Steven Spielberg made with THE COLOR PURPLE (1985) and AMISTAD (1997), where the intent was to be informative, yet in the interests of making it understandable for school children, even printing out accompanying resource material for classrooms, they fudged some of the facts, altering the historical reality.

The film opens in Dorchester County in Maryland, with Araminta Ross (Harriet), known as “Minty,” looking to start a family with John Tubman (Zachary Momoh), who was a free black man.  Marriage between a slave and a free man was not uncommon in this part of the country, the Eastern shore of Maryland, as over half the black population was free.  Marriages, however, were not legally bound, but an informal arrangement.  Any children born follow the mother’s status, so if they are free, the children are born free, but if they remain slaves, their children would be born into slavery.  Minty’s father was also a free man who continued to help out for income, while her mother remained a slave, working in the main house.  Under a Manumission Agreement with the former slave owner (now deceased), her mother was to be freed at the age of 45, also applying to any of her children, but his son, the current owner Edward Brodess (Mike Marunde), rips up the agreement in defiance, claiming he has no intention of honoring a piece of paper, angry that they hired an attorney to read the provisions, as if that amounted to insubordination.  His son Gideon (Joe Alwyn), who befriended Minty as a child, having nursed him back to health following typhoid, now rubs her nose in the depravity of her situation, reminding her who’s boss, never letting her forget it.  Facing a life in bondage, however, is more than she can stand, willing to risk death, so despite her husband’s objections, not wanting to jeopardize his free status, she sets off on foot for Philadelphia, about 100 miles away, evading the main roads and bridges, remaining hidden throughout the journey, though there are unnamed white farmers along the way who willingly help, transporting her hidden in their cargo, shielding her from detection.  In Philadelphia she meets William Still (Leslie Odom Jr.), an ardent abolitionist who transcribes the story of each escaped slave (historical records have been published), allowing her to choose a free name, introducing her to Marie Buchanon (Janelle Monáe), a free-born black woman who owns her own home, quickly offering a room while putting her to work.  Missing her family, she decides to return for them, but this turns out to be much more difficult than expected, as guards are posted on the roads, with slave catchers, along with her nemesis Gideon, who plots revenge.  Changing laws make it even more difficult, like the Fugitive Slave Act, requiring slaves be returned to their rightful owners, even in free states, driving them even further into Canada, adding a growing sense of desperation leading into the Civil War.  While it attempts to feature historical abolitionists, with Harriet offering a fiery speech that convinces them in no uncertain terms not to lose sight of what’s at stake, literally obsessed with freeing slaves in bondage, a practice that continues while joining the Union Army, becoming the first woman in U.S. history to lead an armed military raid at Combahee Ferry, demonstrating the value of black troops in combat while liberating more than 700 escaped slaves.  Much of the film is shot in actual historical locations, beautifully captured by cinematographer John Toll, particularly the back woods and streams, adding a degree of authenticity to what we see, making this not only harrowing, but a strange and mystical journey, made even more exhilarating by adding the choice music of Nina Simone, Nina Simone - Sinnerman (vinyl rip) YouTube (10:12), though much of the film feels contrived and rushed at the end (cut for budgetary reasons), adding mythical scenes for effect, though all along she believes she is God’s ambassador carrying out His will.  Living into her 90’s, the film relies upon an onscreen scrolling text to detail all her accomplishments, some of which might seem surprising, effectively elevating her status with the public at large, yet much of her real humanity remains elusively out of reach.
Posted by Robert Kennedy at 12:01 AM