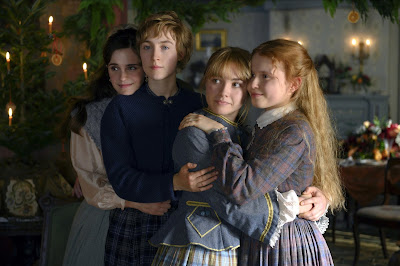 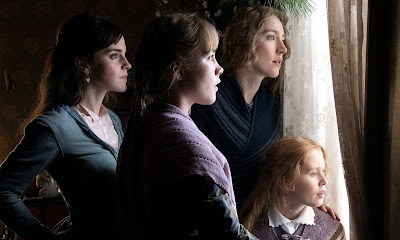 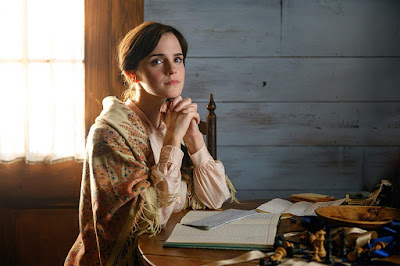 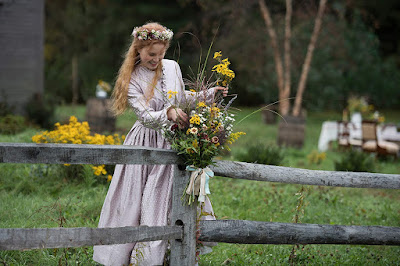 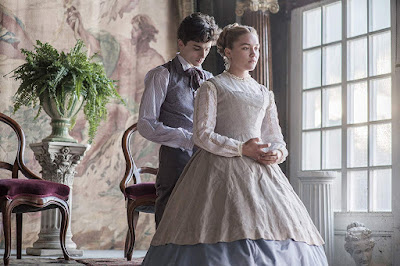 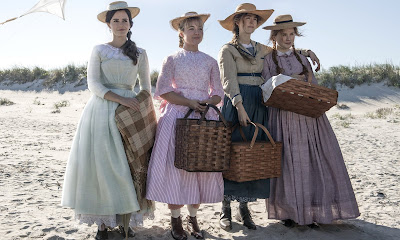 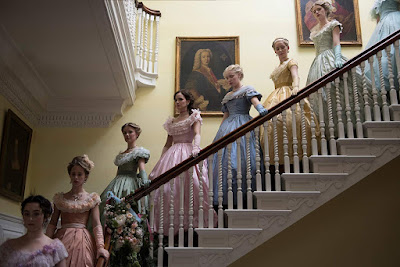 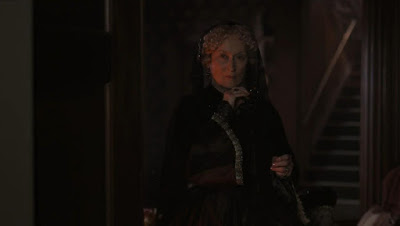 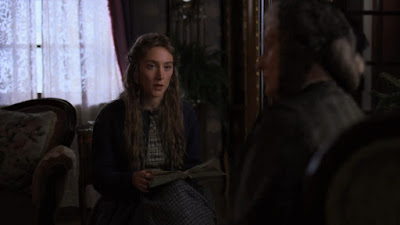 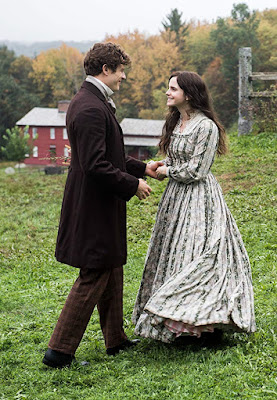 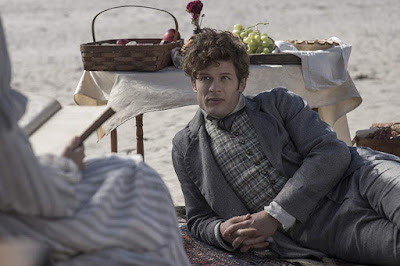 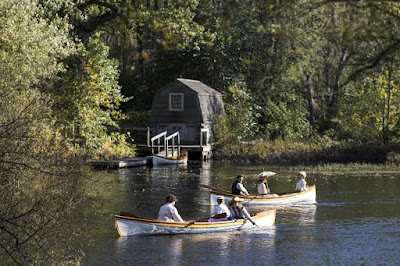 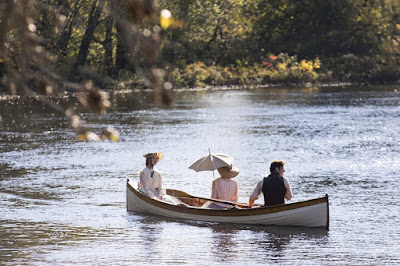 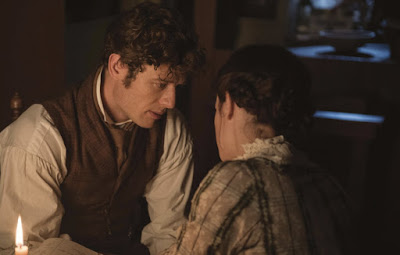 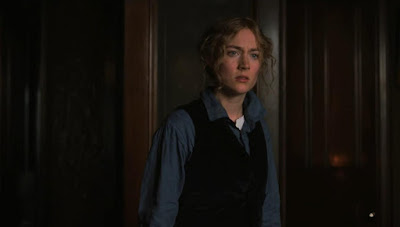 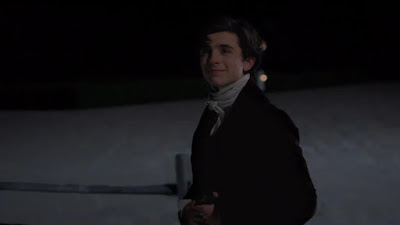 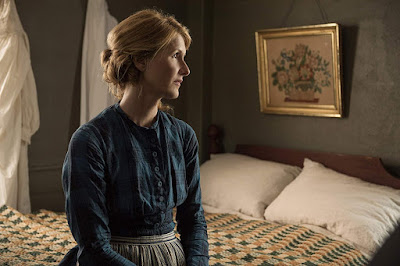 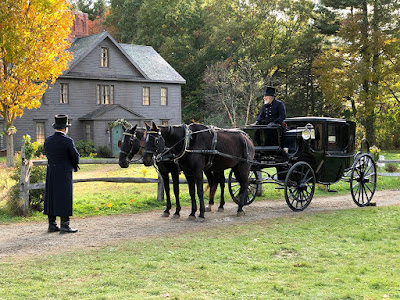 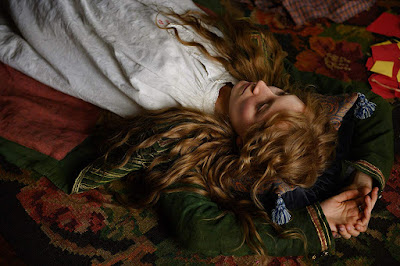 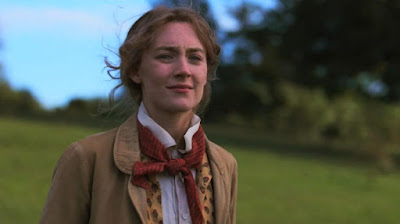 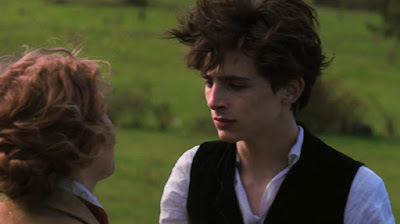 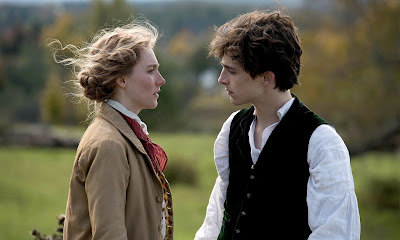 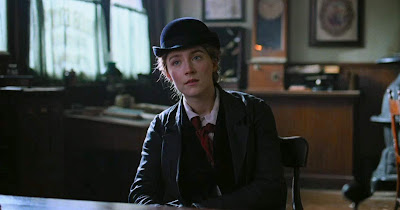 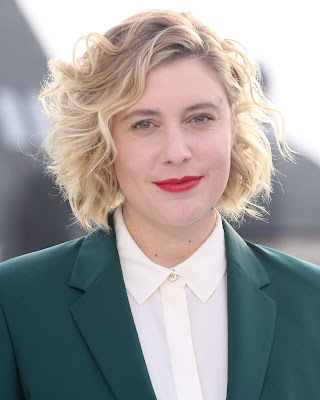 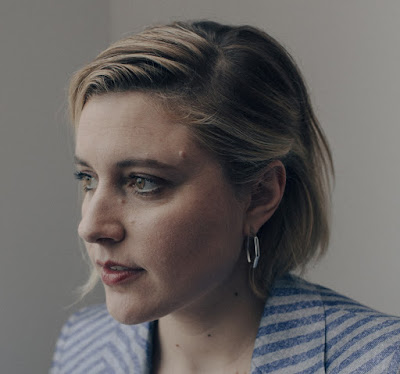 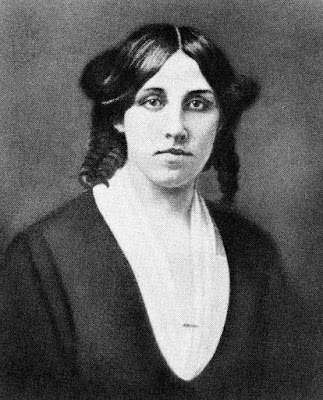 Christmas won’t be Christmas without any presents.
―Little Women, 1868, opening line, written by Louisa May Alcott when she was 36

After the highly acclaimed Lady Bird (2017), an autobiographical accounting of her own childhood experience, Gerwig’s next film is an idyllic portrayal of Louisa May Alcott’s 1868 novel Little Women, revealing a family of New England sisters held together by their mother while the patriarchal figure of their father is away from home for a prolonged period of time fighting in the Civil War.  Told out of time, cris-crossing between past and present, the film is a dizzying representation of childhood innocence, each sister pursuing their own dreams, living in a largely imaginary world where early on, at least, happiness comes easy because they have each other.  With the family representing a utopian alliance of like-minded ideals, the girls represent a spirit of community and kinship, including hopes and dreams of the future, each free to live as they please, each supportive of the other, unaware of the hardships that await them all, as the world in the mid 1860’s had not yet embraced women as full-fledged human beings yet, unable to vote or participate in the democratic process, or make a living on their own with a capacity to support themselves, instead their fates were subject to the patriarchal rule of men who decided everything for them.  Women were viewed as second-class citizens, not primary wage earners, largely condemned to poverty, so their place was in the home, expected to be mothers and child-bearers whose devotional love captured the heart and spirit of family, remaining docile, morally virtuous, responsible for the emotional care of children, but they were never viewed as qualified to make the household decisions.  Nonetheless, as young girls, they were each other’s best friends, rebelliously playing pirate games or inventing stories, even putting on various theatrical skits, where destiny at the time drew them closer together, continuously laughing and playing, inhabiting the same space with each other.  Men of the era repressed all emotions in favor of rationality, leaving women free to explore matters of the heart, including passions and emotions, inhabiting a different emotional sphere than men.  Accordingly, very few books were written specifically for women, which makes this work historically significant, opening new ground, exploring girlhood with a meticulous eye for detail, sharing common experiences that other girls could relate to, perhaps for the very first time.  The title itself is a bit ironic, as a male-dominated society kept women from realizing larger ambitions, seemingly content in their smaller roles, out of sight, largely hidden from view, yet the novel reveals contradictions of feminist explorations colliding against patriarchal repression in an intersection between patience, perseverance, moral indignation, self-sufficiency, and outright creativity.  A companion to Jane Eyre or the Brontë sisters, female chroniclers of a Victorian Age in England, yet there was no equivalent in America at the time, with Alcott challenging American puritanical social norms regarding gender by encouraging her young female readers to question unrealistic notions of romance and embrace their own freedom and independence.

Gorgeously shot by Yorick La Saux in actual locations in and around Concord, Massachusetts, becoming a vibrant showcase for period costumes, also accentuating the pastoral beauty of autumnal colors.  In tone, the film is reminiscent of Judy Garland in MEET ME IN ST. LOUIS (1944), though Garland’s electrifying performance transcends anything seen here, where family is an essential ingredient to the American story, with women carrying the brunt of responsibility in looking after other siblings, like a second mother, while attempting to navigate their own developing social lives, including elegant gowns and ballroom dances as well as first romances, where the changing times of the turn of the century becomes a metaphor for a tumultuous coming-of-age journey to young adulthood.  Similarly, Alcott’s novel (adapted to film for the 8th time) is a captivating glimpse of adolescence focused on sisterly love and domestic tranquility, which similarly follows the young girls’ journey into marriage and young adulthood, largely documented by the writings of Jo March (Saoirse Roman), the most compelling figure in the novel, completely unpredictable and one of the most enduringly popular girlhood literary characters, a boyish tomboy with a Huck Finn sense of adventure and curiosity who blurs the gender boundaries by exclaiming, “It’s bad enough to be a girl, anyway, when I like boy’s games, and work, and manners.  I can’t get over my disappointment in not being a boy.”  Jo’s individualism allows other girls to dream beyond the confines of family restriction and explore the possibility of autonomy, remaining ambiguous throughout in her sexual leanings, seen at the outset visiting a publishing house, thrilled to actually receive compensation for one of her short stories, elatedly running down the street afterwards in a euphoric mood, with Jo representing the alter-ego mindset of the author.  The Marches are a microcosm of women in society, including Meg (Emma Watson), the oldest, prim and proper, an actress at heart, easily the most pragmatic, who yearns to marry and have children of her own, Beth (Eliza Scanlen), perhaps the most generous, a lover of music, spending her time at the piano, always kind to others, yet timid and shy, having a weak heart, and Amy (Florence Pugh), the youngest and most spoiled, an overt social climber, refusing to be poor, a lover of beauty and painting, struggling with her own jealousy and self-centered pettiness, yet strong-willed, showing an abrasive tongue, eventually learning to embody the rigid feminine ideal, while their mother (Laura Dern) is the picture of self-sacrifice, utterly devoted to her girls, but sympathetic to others in need, demonstrated by one Christmas morning when she convinces her girls to give their massive breakfast to a destitute immigrant family living nearby, in the process showing them what dire poverty really means, but their exemplary behavior comes from the selfless example set by their mother, whose husband is off fighting in the Civil War.  One recurring picture of the family is sitting around their mother next to the fireplace as she reads letters received from her husband, each one hanging on every word.  This sense of closeness is evident throughout, living a cloistered existence outside the reach of boys and men, where their playful chatter and overlapping dialogue is a picture of domestic bliss, each independently headstrong in their own way, each perfectly capable of expressing their own ideas.


The novel was initially released in two volumes in 1868 and 1869 (the first printing selling out in two weeks!), one portraying their childhood and another set a few years later following them into married life, eventually combined into one novel, revealing the painfully limited choices for women, challenging the notion that marriage is the ultimate woman’s fulfillment, instead capturing a ferocious spirit of yearning to do big things, to make a difference in the world.  The March patriarchal father (Bob Odenkirk) eventually returns home from the War and people get on with their lives, but at the center, Jo’s unique confidence in herself allows her to subvert the necessity of marriage (a woman’s only means of economic advancement at the time), an idea that prevails throughout both the novel and the film, becoming so successful at it that her rich Aunt March (Meryl Streep), who never married herself but somehow obtained wealth, considers Jo a lost cause.  Nonetheless, she has a male companion that’s been in love with her since they first met, Laurie, Timothée Chalamet, the teenage heartthrob from Call Me By Your Name (2017), who has lived most of his life in Europe but moves in with his grandfather, the kindly neighbor Mr. Laurence (Chris Cooper) after the death of his mother, running into Jo at a ballroom dance she’s actually avoiding, expressing little interest in boys or the ritualistic elegance, yet they immediately hit it off, disdaining all stuffy traditions, dancing unseen on the outdoor porch, actually having fun until Meg, the belle of the ball, turns her ankle, with Laurie insisting on escorting them both safely home, suddenly whisked into the March family home, finding a bevy of beautiful girls, which for a boy in his position is like finding a goldmine.  But he has a competitor, someone Jo meets while working as a governess at a boarding house in New York, finding Professor Friedrich Bhaer (Louis Garrel) tutoring his nephews.  A man of intellect and strong principles, she quickly rejects him when he is overly critical of her writing, all but dismissing his point of view.  But as the years pass and her sisters get on with their lives, her pig-headed stubbornness alienates her from humanity, decisively rejecting Laurie’s marital request, leaving her lonelier than ever, which allows her to write, but at a painful cost.  This trait she shares with other great writers, as they can’t stop to enjoy their lives as they’re too busy writing about it with meticulous detail, spending their days and nights locked away in empty rooms, with Jo often seen writing by candlelight.  There is a frustrating, tacked-on ending that feels like a betrayal, more what readers and viewers might want, turning it into a sentimentalized compromise ending that seems at odds with Jo’s independent streak and philosophical outlook, revealing a commercialized expectation, but hardly the view of the artist herself.  Louisa May Alcott never married, and never thought much of her famous novel, which she described as “moral pap,” becoming an overnight literary star, rejecting all the celebrity acclaim that comes with success, very much like Harper Lee, author of To Kill a Mockingbird, both preferring to live quiet lives of anonymity.
Posted by Robert Kennedy at 12:00 AM