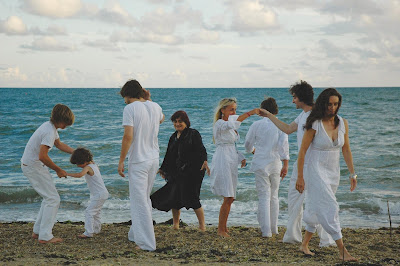 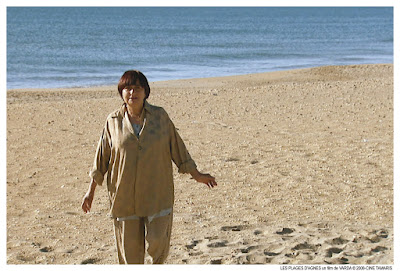 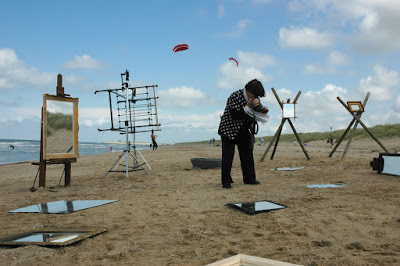 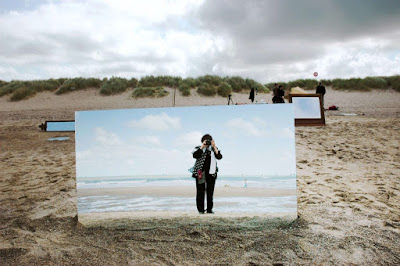 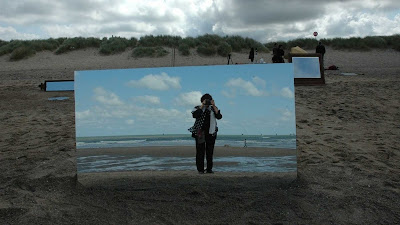 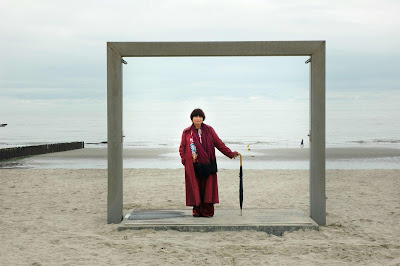 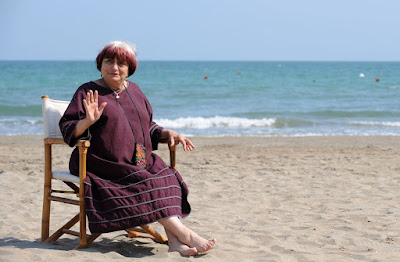 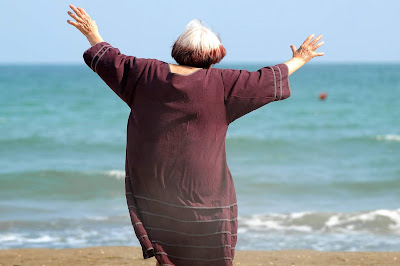 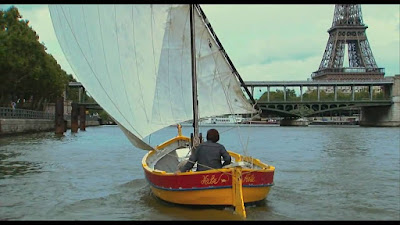 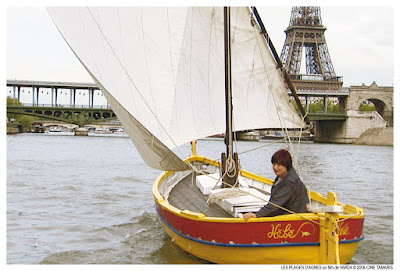 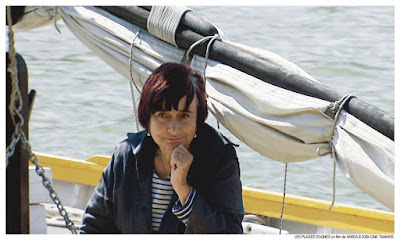 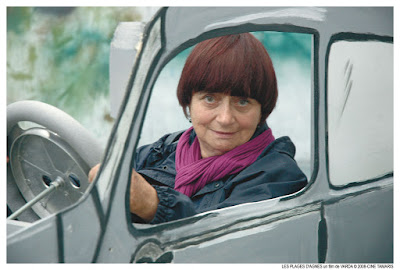 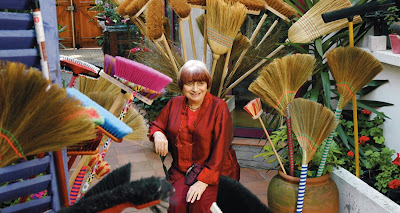 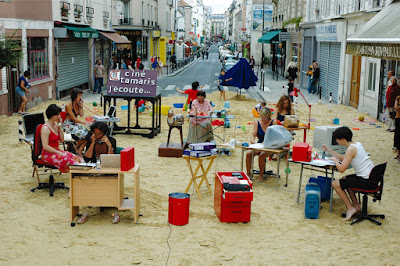 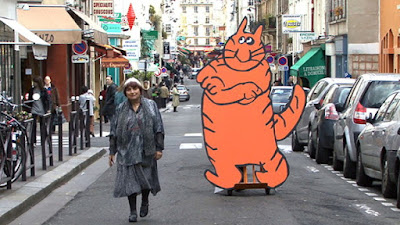 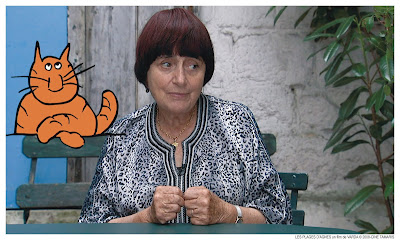 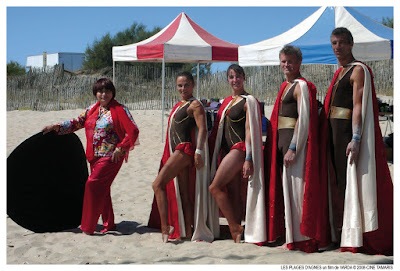 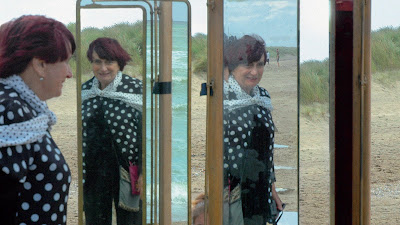 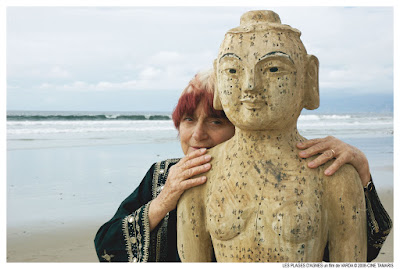 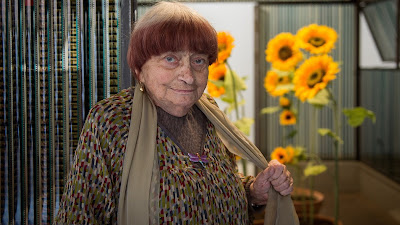 What is cinema?  Light coming in from somewhere, captured by colors more or less dark or colorful.  When I’m here, I feel as though I live in cinema – that it’s my house.  I feel as though I’ve always lived there.
―Agnès Varda, spoken at the end of The Beaches of Agnès (2008)

Agnès Varda has a grandmotherly appearance at this stage in her life where we see her cheerfully celebrating her 80th birthday, but she’s been making movies since the mid 50’s, and was embraced by the French New Wave, though she has never received the same accolades as most of the men involved.  Her filmmaking is more experimental, only occasionally of feature length variety, oftentimes documenting whatever she finds fascinating at the moment, reflecting a spirit of her own curiosity and growth, where art has a way of altering the underlying tension or personal rage at whatever’s troubling her or doesn’t make sense in the world.  A retrospective film, turning the camera on her own career, what this film shows is a generous heart, as Varda reflects upon all the people she has known and worked with throughout her life, including many who have died along the way, like her filmmaker husband Jacques Demy, where every death reminds her of him, paying tribute to his memory throughout the film.  What’s interesting is that no one gets preferential treatment, neither movie stars, film directors, neighbors, family nor friends, as all have had an impact in her life, so she includes everyone in this impressionistic memory piece that includes reenactments of various events, film clips from her movies, and a veritable trunkfull of photographs that turns this into an autobiographical reverie on her own cinematic journey.  Varda has always had a fascination with photography and is especially gifted at capturing the people she has known, where the selections she chooses to share reveal a special intimacy of the moment.  Completely at ease in front of a camera, with little or no inhibitions, this translates to a few naked moments with Viva, the Andy Warhol heroine, but also a naked reenactment of her own young love affair, as portrayed by an anonymous naked couple, utilizing the René Magritte surrealist painting, Les Amants/The Lovers, The Lovers, 1928 by Rene Magritte, with unidentifiable heads covered by a cloth, transforming into naked bodies pressed together in coital bliss, where as the camera pulls away the guy’s erection is impossible to miss.  In much the same way, she’s undaunted by facing the reality of death, feeling comfortable enough with a camera to shoot a tender close up of her husband’s face, which includes seeing a disfiguring lesion brought on by the late stages of AIDS.  Varda is a practitioner of interactive art, complete with video installations set up on the city streets, where electronic imagery along with a selective sound design generates a unique style of performance art.

In the opening scenes of her first genuinely autobiographical film, part documentary essay and part self-portrait, revisiting places of her past, Varda recalls the beaches of Belgium where she spent her childhood, displaying a photograph of her as a child playing with her siblings in the sand, followed in a flash by a modern day recreation using young actors in the roles of the same two little girls on the beach.  Made up of her own stories of the past, the film is a recollection of memories, dreams, or “something imaginary” as described by Varda, where in the act of recollection, people fast-forward memories in an instant, with Varda creating a virtuoso art installation with her assistants setting up mirrors of all sizes and frames along the beach, a sequence of staggering choreography producing a kaleidoscopic effect from the reflections of light, refracting her image over multi-angled surfaces, presenting a moving picture revealing variations on a fragmentary self, eventually washed up by the waves, revealing how images are altered over time.  “If you open people up you’ll find landscapes,” she claims, “if you open me up, you’ll find beaches.”  Varda’s films occupy specific places, immersed in the specifics of the location, where an inveterate traveler could just as easily follow the same path and make their own observations, but she also brings her own acutely developed curiosity and artistic skills.  The film plays out like a series of installations, revealing Varda’s ingenuity with graphic art design, using voicovers to narrate her story, given the birth name Arlette, as she was conceived in the city of Arles, officially changed to Agnès at the age of 18, seen writing the name Arlette in the sand before it is washed away by the waves.  Making numerous diversions along the way, told out of order, and using a variety of visual techniques, she recalls the family relocating during the war to a sailboat anchored in the Mediterranean harbor town of Sète in southern France.  Recreating herself in her youth, she uses actress Anne-Laure Manceau with a similar bowl haircut as a younger incarnation of herself picking up a camera and writing the script for her first film LA POINTE COURTE (1955), set in the town of Sète, given a stark look of photographic detail.  This film, like Varda’s other work, is inhabited by her love and knowledge of paintings, literature, and poetry, poking fun at herself through art, using a particular mixed-media painting of René Magritte himself surrounded by photographs of other Surrealists with their eyes closed from 1929 (Magritte: Je ne vois pas la cachée dans la forêt | Sensorial Daily), recreating a similar image of Varda in the middle surrounded by legendary French directors (all men) with their eyes open (5 Agnès Varda films that taught us how to be vulnerable).

Lovingly presented and highly inventive, watching this movie is much like picking up an old cinema magazine from the 60’s or 70’s and flipping through the pages, where stills from a certain movie set might catch your eye, but turn the page and there’s a stunning photo of Catherine Deneuve in the flower of her youth looking positively gorgeous, or a brief piece on some rare, hard to find Varda film that you never heard about.  Clips of most all of her films are included, where Varda amusingly provides relevant backdrop information on what was happening in her life at that time, with appropriate photos, while at other times she’ll stage a reenactment 50 years later where the children in the film have now become elderly senior citizens.  One thing that’s readily apparent is that despite personal setbacks, or the bleak, incredibly depressing mood that pervades throughout one of her best films, Vagabond (Sans toit ni loi) with Sandrine Bonnaire in 1985, Varda is a genuinely warmhearted and happy human being, whose joyful outlook is evident as she cheerfully turns camera shy film essayist Chris Marker into an animated grinning cat, but one that continuously offers serious, deeply probing questions.  British actress Jane Birkin hams it up in a rollicking Laurel and Hardy cross-dressing comedy routine at one point.  But this is also a travelogue across the world, as Varda’s snapshots take her to places like Cuba, China or Japan, where she discovers babies are dressed in luxuriously colorful outfits, dressed as if they are heir to the throne, unlike babies back home that are continually dressed in pinks and blues, or Los Angeles during the late 1960’s where she observes anti-war demonstrations and Black Panther rallies firsthand.   An ardent feminist, her outrage is eloquently expressed in a brief cut to Bonnaire’s rage in Vagabond (Sans toit ni loi), where her enduring work is a living testament to what she’s lived through.  Told through a mosaic of personal adventures, Varda simply encapsulates her life in this film through a collection of images, some of them sad, such as a visit to her husband’s grave, or some joyously elevating, such as many of the visits with her own family.  Through humor and sheer inventiveness, she keeps this interesting, where one of the more memorable moments is creating a backyard family game, like at a carnival, where her own kids can throw balls at giant cardboard pictures of herself, knocking them down and flattening them in a second, which obviously has a cathartic effect for everyone involved.   Varda’s life can be measured by the joy and curiosity she has brought to others, having missed little in her lifetime, as she’s still acutely aware of the world passing by with an ingenious capacity to playfully interact with all its inhabitants.
Posted by Robert Kennedy at 12:00 AM