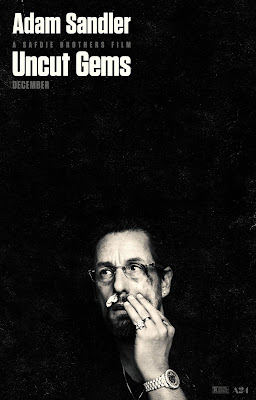 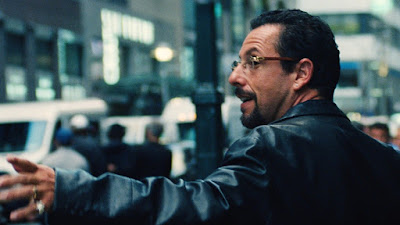 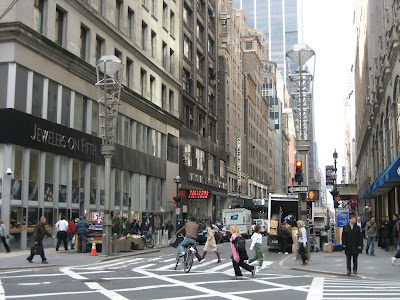 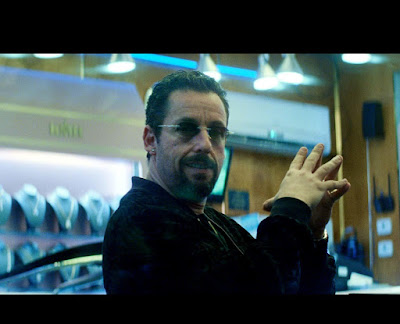 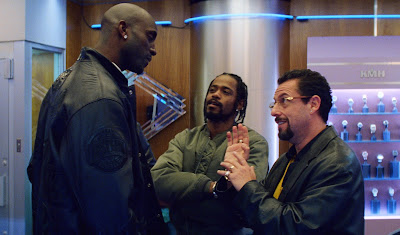 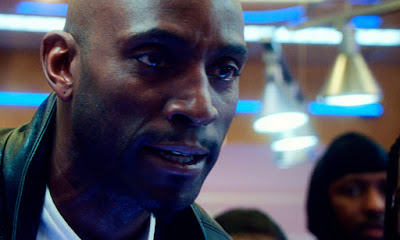 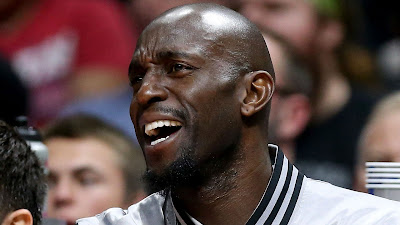 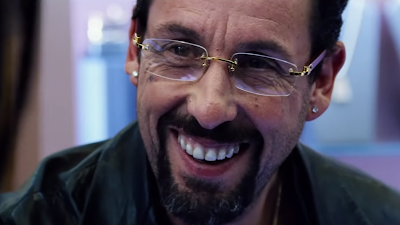 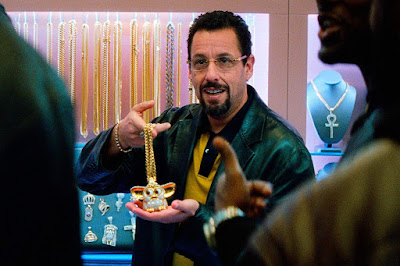 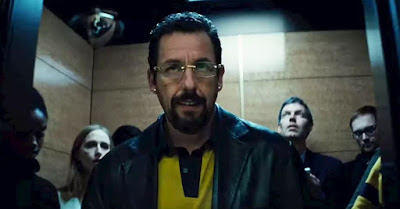 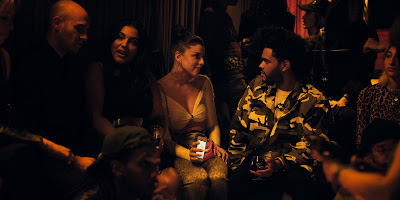 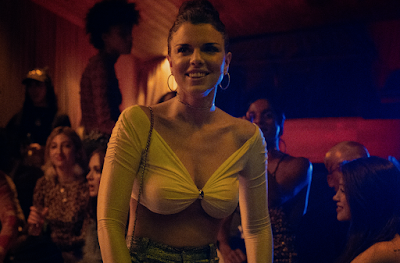 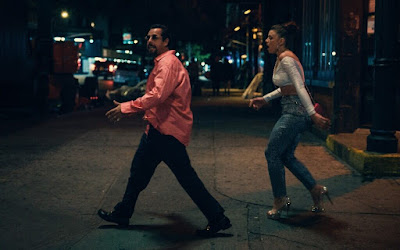 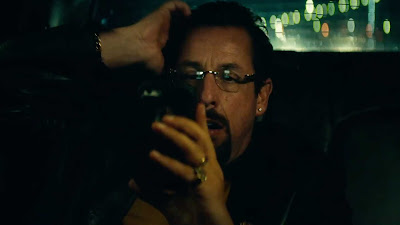 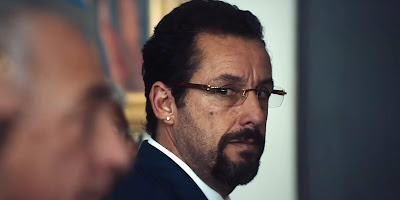 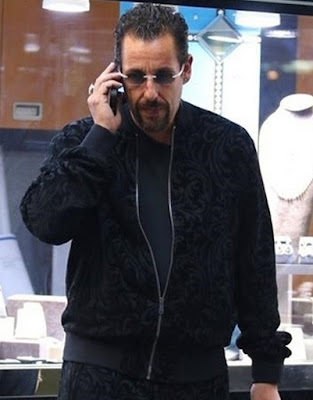 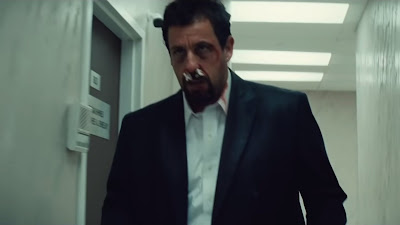 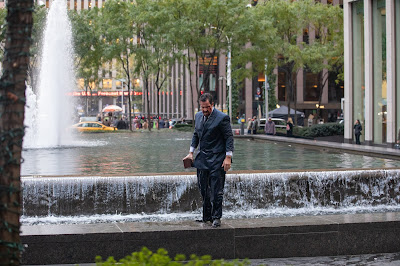 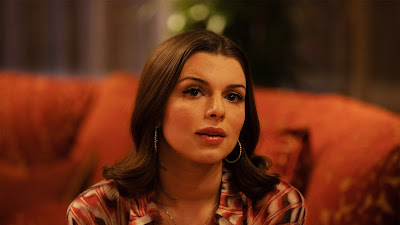 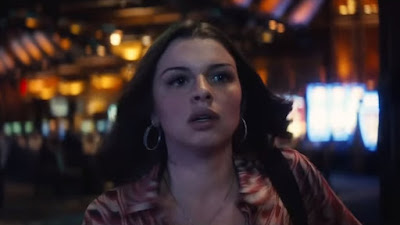 Like the other Safdie movies, this is an adrenaline rush, a trip into the dark side of high stakes gambling addiction, featuring Adam Sandler as Howard Ratner, a brash, overly obnoxious New York City jeweler who is always seeking the next big score, continually floundering in debt, with a pair of thugs following him wherever he goes, where even his bookie (Mike Francesca) has no interest in seeing him, as chaos and mayhem follow him wherever he goes.  Obviously inspired by Altman’s California Split (1974), a hyper-realistic film that thrives on real gamblers and authentic locations, that treats Vegas like the gambling mecca it is, this film is instead set in the Diamond District of New York where European Jews escaping Hitler settled in WWII and still maintain a dominant influence, with Howard working in a small jewelry shop, a man glued to his cellphone, endlessly talking as he weaves his way through city traffic, oblivious to the sounds and noises of a bustling city, talking to several people simultaneously, usually cutting someone off to speak to another, then losing the connection, carrying on this chaotic thought process filled with neverending interruptions, where he’s so wrapped up in his bets that he loses all contact with the reality of his family living in Long Island, where his kids completely ignore him while his wife Dinah (Idina Menzel) is ready to divorce him, as he’s keeping an upscale apartment in Manhattan for his younger mistress, Julia (newcomer Julia Fox, every guy’s wish, more of a sexy wish-fulfillment fantasy than a real person), who works for him as a counter clerk, splitting his time between the two women, yet utterly miserable when it doesn’t provide the instant gratification he so badly desires.  Always beset by money problems, borrowing from one loan shark to pay off another, he’s $100,000 in debt to his brother-in-law Arno (Eric Bogosian) who has lost all patience in dealing with him, resorting to strong-armed tactics that require threats and bodily harm, but this is no deterrence to Howard’s ambitious schemes, as he literally can’t stop from shooting himself in the foot, always viewed as his own worst enemy, continually falling deeper into debt where it would take a miracle longshot to get him out.  This is the normal day-to-day anxiety level for Howard, walking from one catastrophe to the next, yet always holding out hope that his big winnings are just around the corner.

This kind of delusional mindset is fertile territory for the Safdie brothers, makers of Good Time (2017), highly popular at the box office while acclaimed by critics, yet their delirious plot contrivances are easily overlooked as viewers get caught up in the pulsating rhythms of the journey, propelled by a mesmerizing techno score written by Oneohtrix Point Never (Daniel Lopatin), always a rollicking thrill ride, like finding that ultimate attraction at an amusement park and riding it over and over again.  Yet this obsessively compulsive high wire act comes at a price, where the laws of physics suggest what goes up must come down, usually with tragic results, as Safdie characters are so damaged from their own neurotic theatrics that it’s impossible to live any other way, caught in a labyrinth of their own making, suffocating from their own ill-advised decisions.  Entering the world of this rat race, Sandler stands out amongst the crowd, suffering from a kind of attention deficit disorder that perfectly suits his lifestyle, with illusions of grandeur, always seeking the limelight, wanting to be at the center of it all.  Used to neverending disappointments, he’s thrilled when Celtic forward NBA All-Star Kevin Garnett (playing himself) walks into his store seeking that something special, attempting to awe him with an uncut black opal from an Ethiopian Jewish mining company (smuggled inside a fish), which he later plans to auction off at inflated prices, allegedly valued at over a million dollars, if you listen to Howard, who’s a compulsive liar.  Garnett is so enthralled with the aura emanating from the precious stone that he talks Howard into reluctantly lending it to him for the Eastern Conference Finals game tonight, leaving a championship ring as collateral, which Howard immediately pawns, betting on Garnett to have a huge game, adding suspense to actual footage from the game, thinking things are finally coming into place.  But Arno gets wind of the bet, knowing the money used actually belongs to him, having the power to stop the bet, depriving Howard of all his winnings.  Somewhat shell-shocked in disbelief, things spiral out of control even more than usual, with Howard desperate to make up for his losses, lost in a Sisyphean cycle of neverending mood swings, filled with profanity-laced tirades, feeling utterly euphoric one moment or suicidal the next when things don’t go as planned, exhausted by the neverending series of disappointments.

Unfortunately Howard’s character fits the negative stereotype of Jews as money-grubbers, dressed in Gucci from head to toe, though the Safdie brothers are themselves Jews raised in New York.  Cleverly interwoven into the story, however, are autobiographical sounding details of Howard’s Jewish heritage, mesmerized by what he learned about Ethiopian Jews on the History Channel, developing a kinship and fervent interest in the stones they dug up, undeterred, however, from becoming implicated in colonial opportunism as well as a global network of exploited labor when it comes to developing an auction scam.  More authentic is the family scene of Passover Seder, mirroring the Coen brother’s own Jewish upbringing in A Serious Man (2009), with the kids running around in search of the hidden matzo, or reciting (in English and in Hebrew) the Ten Plagues, with Howard seated at the same table as Arno, given an almost surreal context.  Howard’s deluded attempts to make up with his wife are laughably pathetic, clueless to just how despicable he’s become to her, gambling away their life savings, and with it any hint of family respect, subjecting them all to potential harm from criminal thugs seeking retribution, where every action he takes is counter to his family’s well-being.  Pushed to the edge of despair, Howard’s desperations are reminiscent of Ben Gazzara in Cassavetes’ The Killing of a Chinese Bookie (1976), where morals are thrown out the window when it comes to the pressures of repaying a gargantuan debt, including the risk one is willing to take to wipe the slate clean.  The panic and paranoia that follow him throughout the film are inescapable forces that refuse to release him from their clutches, where even a brief window of opportunity quickly turns to misfortune, with Howard’s ominous miscalculations becoming the heart of the film, drawn into a nihilistic universe where there is literally no escape, as the price is too steep.  Shot by Darius Khondji on 35mm accentuating a heightened realism, somehow bringing the kinetic energy of the streets to life, with Martin Scorsese as one of the film’s executive producers, yet this contaminated world is not a pretty place, and Howard is as unreliable and blatantly screwed up as any character in recent memory, with little sympathy even from viewers, as he mistreats everyone, constantly yelling and screaming, treating people like scum, referred to as “the most annoying person on the planet.”  There are misogynous tinges throughout this male-dominated film, where the near invisible women are reduced to secondary characters, yet the atrocious male behavior has massive consequences, too blind to see the light, allowing darkness to consume every small corner of the film, where viewers can only shake their heads in dizzy bewilderment.
Posted by Robert Kennedy at 12:00 AM