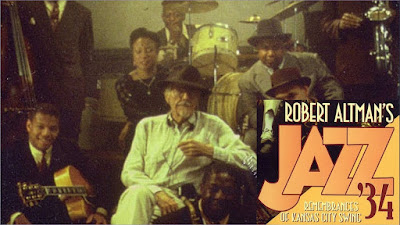 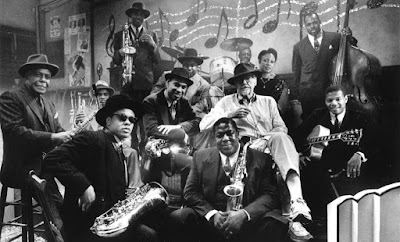 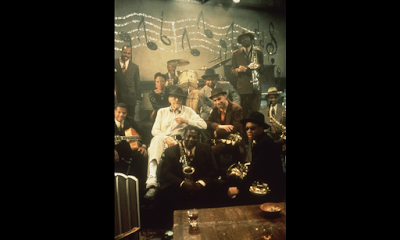 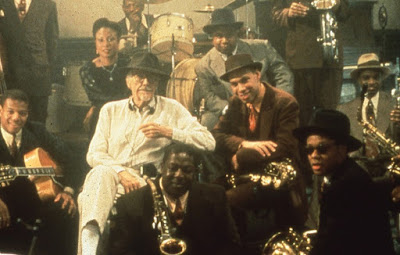 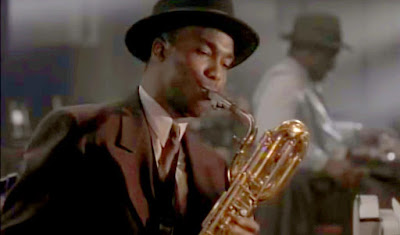 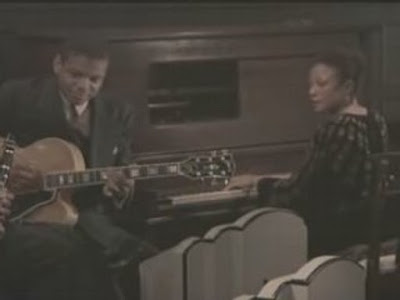 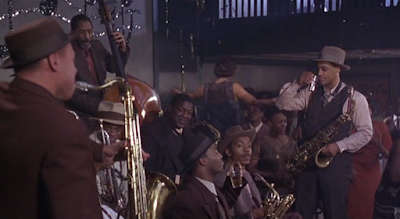 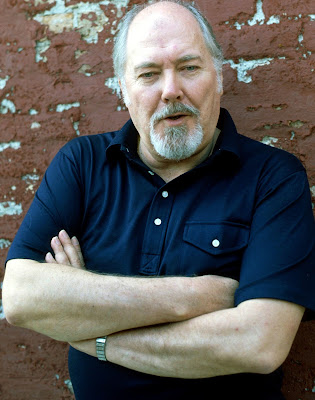 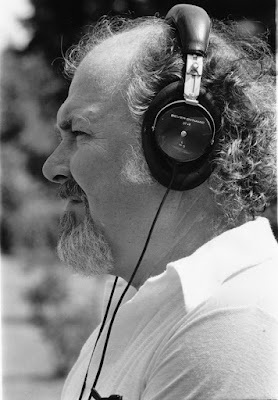 A curiously neglected film, originally made as a PBS Great Performances series for television, the only one Altman ever did, coming on the heels of his film KANSAS CITY (1996), a fictionalized gangster story set during the Great Depression when Kansas City was the center of the jazz world.  The jazz music was so integral to the film that Altman decided to make a special tribute film using modern day musicians recreating the look and sound of Kansas City in the 30’s.  As Altman grew up in Kansas City, he wanted the music to be authentic to the period, where the film is a recreation of a live jam session at the Hey Hey Club with predominately black clientele, becoming a mock documentary.  For whatever reason, the film never had a theatrical release and has never been seen in Chicago until recently when a 35mm print was screened by the Chicago Film Society (Jazz '34: Remembrances of Kansas City Swing).  Prior to this, the only available version of this film was released on vintage VHS copies, as it was never transferred to a DVD (though there are pirated bootleg DVD’s made from VHS prints), though the film may be viewed in full for the shortened TV release on the Internet, Jazz Jazz Session In Hey Hey Club YouTube (55:06), while an extended (additional 15 minutes) theatrical version with three additional numbers was made for anticipated screenings that never happened.  It uses some of the footage that was edited out of KANSAS CITY with a brief introductory narration from Harry Belafonte, who played the owner of the club in the earlier film.  There are interlude sequences between the musical numbers that include voiceovers about the city’s vibrant jazz scene, though it’s unclear if he’s quoting actual sources or using mythical dialogue, but he modeled his film on an earlier ten minute short entitled JAMMIN’ THE BLUES (1944), Jammin' The Blues (1944) | Lester Young Oscar Nominated Short YouTube (10:20), featuring tenor sax legend Lester Young in a small combo band, including both slow and up tempo numbers, also the voice and dance steps of Marie Bryant, allowing the musicians to play in a casual setting, documenting their extraordinary artistry without any embellishments.  Of course the most famous in all of cinema is arguably George Cukor’s one-take shot of Judy Garland in A Star Is Born (1954) singing HD 1080p "The Man That Got Away" Judy Garland - A Star Is ... YouTube (4:38) in an intimate, after-hours (and all-white) setting that smolders with searing emotional poignancy.
In this film, featuring three tenor sax legends, Lester Young is played by saxophonist Joshua Redman, Craig Handy plays Coleman Hawkins, and James Carter plays Ben Webster, while Geri Allen plays pianist May Lou Williams.  Using the sets from the earlier film as well as vintage cars and period costumes, Altman captured these live performances on three 35mm cameras, much of it used in his earlier film, but heard in extended versions here, filming fifteen different musical numbers, culminating in an infamous recreation of the battle of the saxes between Lester Young and Coleman Hawkins.  Altman certainly captures the look of the 30’s, where the free flowing drinks and crowded all-night clubs are in stark contrast to the depiction of rural desolation during the Depression, where it feels like a parallel universe all its own, or like a time warp, but Kansas City was run by political boss Tom Pendergast who controlled the political machine and the racketeers led by John Lazia, with an open alliance with organized crime who kept the drinks flowing during Prohibition, allowing them to run the after-hours clubs and brothels, with as many as 50 to 100 nightclubs in operation at one time, perhaps the largest concentration anywhere in America.  Jazz had a reputation for attracting customers, particularly black clientele, who at that time represented about 15% of the city population, yet jazz and blues were cultural institutions for urban blacks, becoming the bedrock of the city’s nightlife, most of which was centered around 18th Street and Vine.  In the late 20’s, Count Basie got his start with the Bennie Moten band in Kansas City, a big band attempting to rival Duke Ellington, introducing a bluesy style that was described as the Kansas City stomp, where one of their songs, Jazz '34 | Kansas City Band "Moten Swing" YouTube (3:18), which Basie actually took credit for, became commonly described as Kansas City Swing.  Charlie Parker, a city native who would have been around 14 during this period, likely heard many of these jam sessions, sitting in later in the decade, ushering in his own era of hard-driving bebop in the early 40’s.


What’s uniquely different here for an Altman film is the lack of open space, feeling tightly congested, all crammed into a single room, with little camera movement, offering the same look throughout, which may grow cumbersome.  While there is no plot, a running commentary between songs does add an impressionistic glimpse of various memories and reflections affiliated with the times, but they are completely overshadowed by the music which dominates the film, one of the few jazz documentaries on record, given a personal flavor by this director.  While they play old traditional standards, they use modern era techniques, which includes a contemporary sensibility, where an understanding of jazz fusion reigns supreme, with women flirting with the men, all in their faces, with the place jam packed like a juke joint, as musicians are placed all around, some waiting their turn, while dancers will flare up out of nowhere, creating a combined, combustible energy, while at other times the place is near empty, creating a slow and easy mood, with some musicians fast asleep on chairs.  Dressed in fine suits and pork pie hats, cigarettes are always dangling from someone’s mouth, yet the free flowing jazz is contagious, with the camera fluidly moving from one musician to another, highlighting instrumental solos from a sax, clarinet, guitar, trumpet, bass, or piano, zooming in on close-ups while also pulling back for the collective ensemble as a whole.  Yet the overall competitive ferocity is the catalyst for the driving rhythm of the film, which reaches its peak in a fierce showdown between legends, a cutting contest, captured here in all its glory,  Jazz '34: Final Battle | Kansas City Band "Yeah Man" YouTube (7:04), with Lester Young and Coleman Hawkins going toe to toe with one another, with the crowd in an orgiastic frenzy, hanging on every note, creating a memorable recollection of the spirit of the times, a nostalgic tribute to the heyday of jazz in America.  As shown here, it’s the only game in town when all other businesses have dried up, with Altman capturing what he remembers about those times.  While it feels hastily edited together, the synchronized sound does not always match the image onscreen, where it comes across as an idyllic recreation, like in one’s dreams, as the camaraderie is too perfect, where everyone is joyously paying attention, their emotions riding on every note.  That’s just not the way it is, but in this brief musical reverie, which may be emblematic for a jazz heaven, that’s the way it’s supposed to be, at least in Altman’s mind.
Posted by Robert Kennedy at 12:00 AM