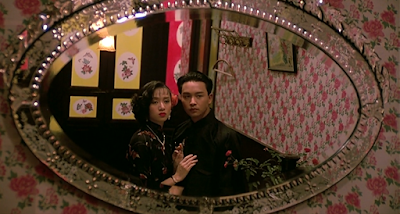 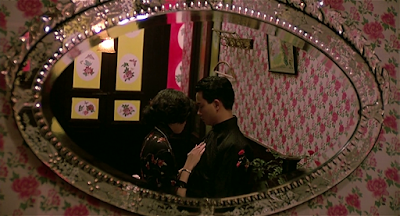 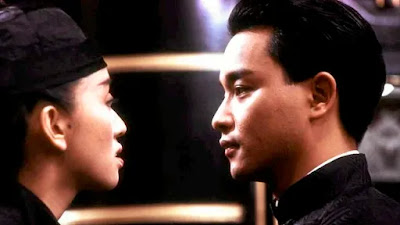 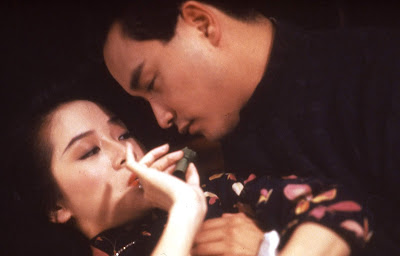 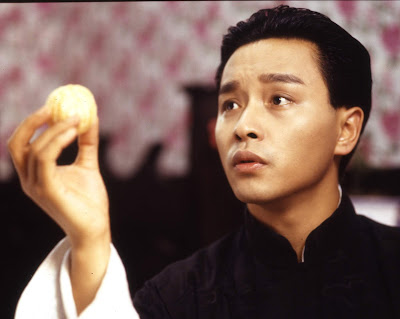 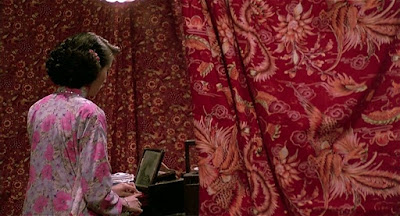 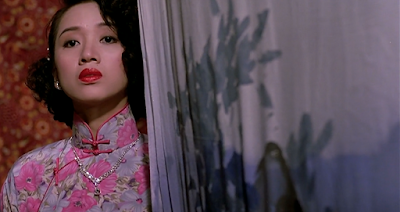 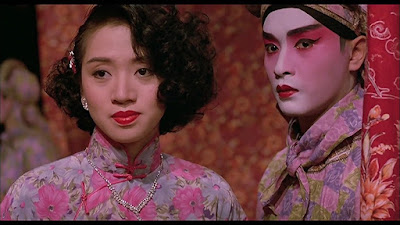 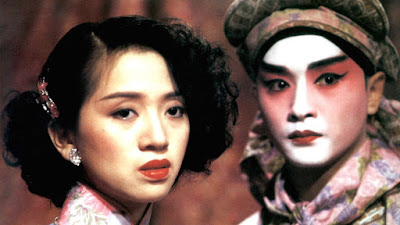 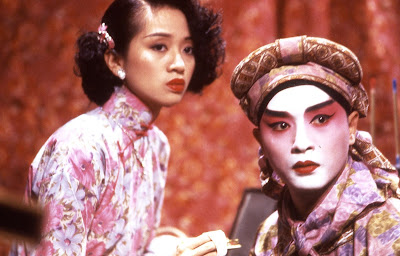 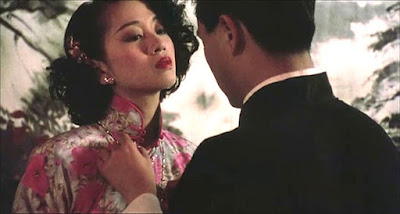 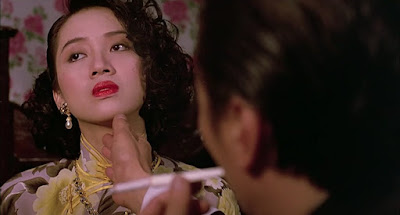 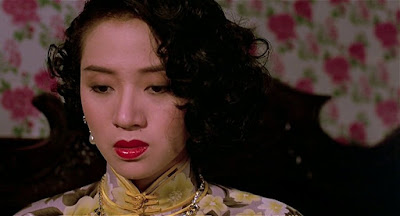 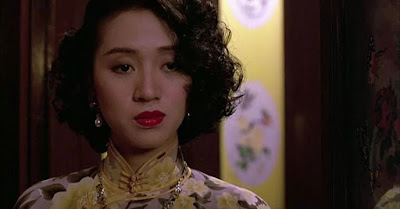 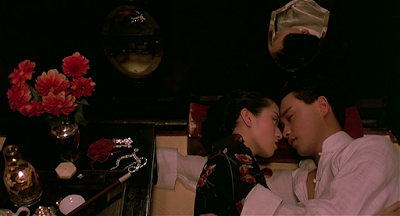 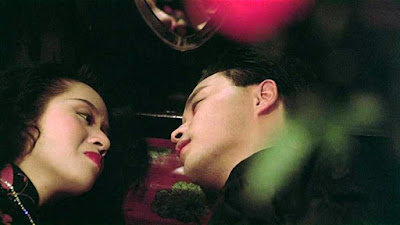 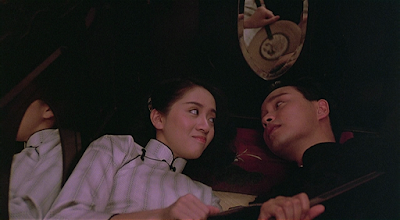 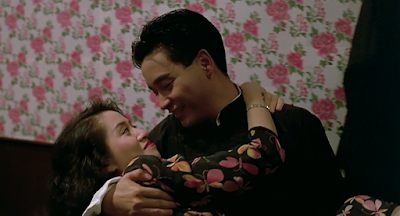 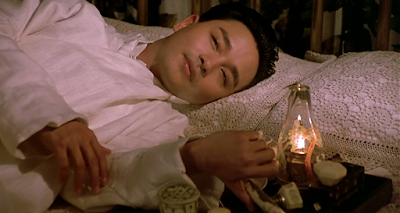 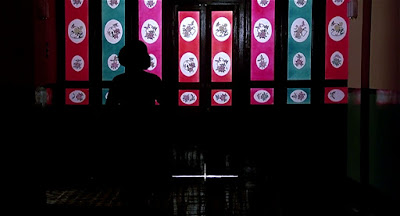 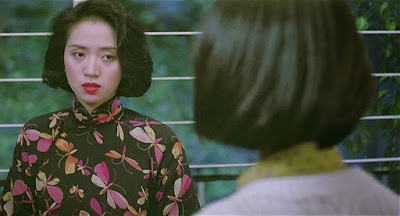 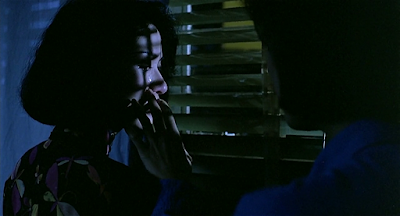 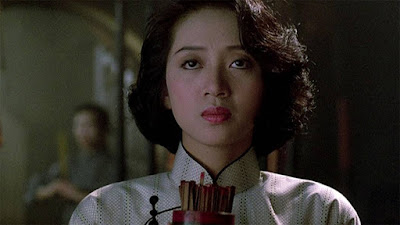 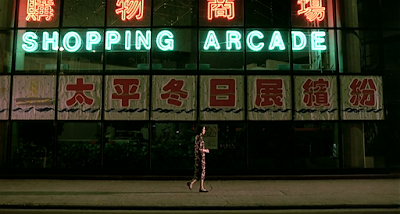 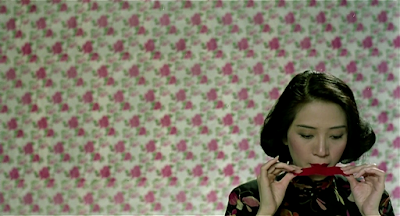 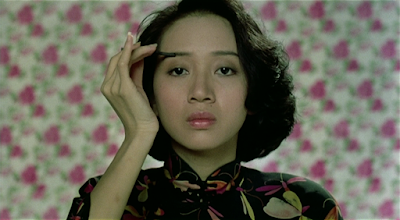 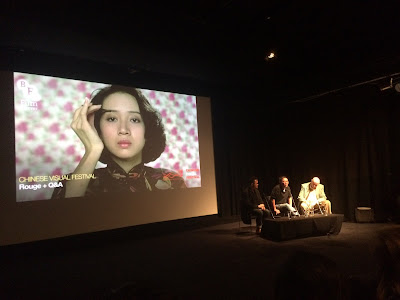 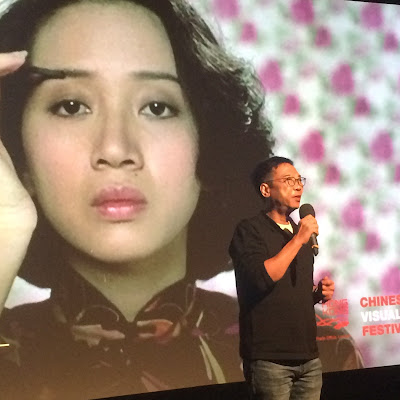 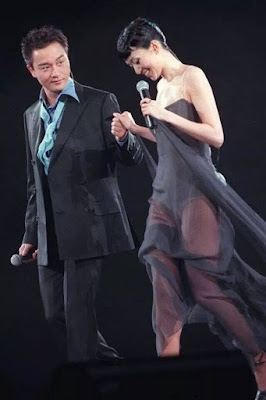 A predecessor to Hou Hsiao-hsien’s masterful Flowers of Shanghai (Hai shang hua) (1998), though not nearly as opulent, yet both take us back in time to the exquisite glamor of a luxurious Flower House and opium den, a high-end brothel in the oldest section of Hong Kong, with all the girls given colorful names, as Kwan creates a powerfully intoxicating film that moves seamlessly between the present and the past, using a link between the two worlds, Anita Mui as Fleur (the queen of Hong Kong’s pop-music industry of the 80’s and the heart and soul of the film in perhaps her finest role), who narrates the film, mysteriously resurfacing as a ghostly presence 53 years in the future to a Hong Kong transformed into the modern era, yet still dressed as a young courtesan from the 30’s searching for her missing love.  Leslie Cheung as Chan Chen-pang is 12th Master, her patient lover from the past, a successful merchant whose courtship ritual is a thing for the ages, becoming the talk of the town through endless gossip, yet the romantic gestures add a special kind of allure to this film, as the two become inseparable, so closely entwined through the opium haze.  The depiction of the past is nothing less than stupendous, as the costumes, art and set decoration, acting performances and proliferation of colors are simply magnificent, actually finding an old-fashioned inn in Macao for the film shoot, elegantly filmed by Bill Wong, with Jackie Chan as one of the producers.  Of interest, Leslie Cheung was under contract by a different studio, but Anita Mui agreed to make a film for that studio in order to obtain his services on the film.  Adapting a novel by Lillian Lee, her recollections of the past describe an era we know little about and as seen through the present is largely forgotten, told in a dreamy and visually seductive style, literally sweeping the Hong Kong Awards in 1989, winners of best picture, best director, best actress, best editing, original film score and best song.  This film accentuates what is lost, expressed through the longing eyes of Fleur, always dressed in a colorful silk dress (the Cheongsam) and formal style of make-up, as emphasized in the film’s opening shots, looking glamorously overdressed when she returns to the present as a ghost, recounting the story of her youth, which is much more vividly alluring than anything seen in the present.  The modern era in its hurry to move ahead has whizzed right past, where memory has lost all meaning.  Even in her weakened state, Fleur haunts a modern day couple, not with any supernatural powers, but with her intense longing to find her long lost lover.  As 12th Master’s family objected to their marriage as well as his desire to become an opera singer, they decided to commit suicide together so they could be joined in the next world, with Fleur waiting in the underworld in vain for 50 years until she decides to resurface in modern day Hong Kong, asking for help along the way.  Blending a lovingly recreated and evocative nostalgic period of the past with a kind of Shakespearean Romeo and Juliet suicide pact, the film becomes a tragedy about star-crossed lovers who have lost their way in the afterlife.

Fleur mysteriously appears just as she was 50 years ago, literally frozen in time, arriving in a modern era newspaper office to place a missing persons advertisement for 12th Master, “3811, Rendezvous at usual place,” (numbers standing for March 8 at 11 pm, the same time of their suicide), speaking to one of the editors, Yuen (Alex Man), an overly bland yet ordinary guy in a sweater who thinks nothing at all of a beautiful women dressed in her finest attire appearing at such a late hour, clueless to her motive and not really curious, growing somewhat irritated when she follows him on the bus ride home, only then realizing she’s a ghost, freaking out at first, but she’s not really a threatening presence at all, exuding a sense of innocence and vulnerability in what to her is a frighteningly foreign world.  More than anything, she’s a woman in need who’s not asking for much, but she’s completely blindsided by modern transformations in Hong Kong, where an elementary school has replaced the Flower House while the infamous opera house has been replaced by a supermarket, her old neighborhood transformed into something completely unrecognizable, making it difficult for 12th Master to find her.  Given the circumstances, Yuen offers to help, though his reporter girlfriend Ah Chor (Emily Chu) has some concerns, curious why a strange woman is in their home, thinking she’s a swindler up to no good, but her fear quickly dissipates as well, largely due to the Fleur’s growing desperation, especially when 12th Master doesn’t show up, weakened by the modern era energy that seems to sap her strength.  Kwan subverts the genre, however, as his ghost is unable to fly, can be seen by others, and has no super power, but is just an ordinary person, essentially unchanged for the past 50 years.  Her compelling situation becomes more evident, with both willing to help, searching through the historical archives for help, but Fleur’s era predates the city newspaper.  What they do discover in old thrift shops are daily news pages that used to sell for 50 cents, now worth much more, where they are able to discover a recording of her suicide, with surprising results, as she died but he somehow survived, leaving her to wander alone without him, where in truth, her romanticized vision of the past never actually existed.  With suggestions of an uncertain future, Hong Kong has a history of colonization, under British rule for over 150 years, yet the film was made 3 years after the Sino-British Joint Declaration Agreement that is expected to return Hong Kong to the sovereignty of Mainland China in 1997, wrapping the city in an allure of mystery with an ambiguous future.  Made in the glory days of Hong Kong cinema, at the height of their creative achievements, free to touch on controversial subject matters that would be more difficult to express today, this film questions what we remember and what we have forgotten, moving back and forth in time to accentuate those missing pieces, conjuring up an apparition from Hong Kong’s past that all but disappears in its future, largely punctuating a forgotten world we left behind that holds little meaning to us now, yet through flashback sequences director Kwan assuredly reminds us of the infinite beauty of the early signs of love.

What’s uniquely different is how a city is used to transport viewers back and forth between different eras of time, alternating between the brightened rhythms and colors of the Peking opera, which melodramatically presents history and romance through a tragic eye, exuding so much more passion when contrasted against a drab and colorless present era where modernity diminishes all meaning, with people separated and cut off from one another, living privately, like emotional islands, barely recognizing one another on the streets, feeling more dehumanized by advancing technology, removing that claustrophobic intimacy of narrow streets and alleyways, where living on top of one another was once characterized by warmth and vibrant color schemes, now evolving into grayness and empty space.  Mui’s quietly affecting performance along with Cheung’s natural charm are exquisitely presented in such a lush and sensual artistic palate that their romance becomes one for the ages.  Yuen and Ah Cor, by contrast, lack the kind of intensity that defines the earlier times, unable to make the same kind of dramatic commitment to each other, where even a discussion of Fleur’s torrid affair stimulates them into lovemaking, yet they can’t escape their sterile existence, surrounded by the emptiness of sleek modernization where love’s impact is diminished and devalued, yet they do apparently discover that reality is more reliable and sustainable than grandiose reflections of an idealized past.  For a courtesan, however, finding love among the neverending stream of customers was like a dream, the answer to a prayer, as it was her way out of being treated like a sexual commodity, allowing her to independently redefine her identity and meaning for living, no longer beholden to the house rules.  The pace of life in the past was slower, induced by smoking opium, content to stay in one place, where no one was in such a hurry.  Nowadays the frantic rush on the street reflects a hectic lifestyle, always running to and from work, where everpresent responsibilities prevent lasting relationships, which more than anything require commitment and time.  There’s an element of disillusion here, as Fleur has been in mourning for such an extended period, hoping that her lover would remain as young as her, frozen in time over 50 years, burdened by his ghostly memory, even refusing to drink the “five-flavored tea of forgetfulness” that would erase her memories and free her for future reincarnation.  Her realization of the sad truth is sudden and impactful, disappointed that her lingering efforts have all been in vain, even angered by what transpired.  It’s a bit melodramatic, given a theatrical flourish, using the pyrotechnic special effects on the set of an action movie to create a high-wired ghostly appearance, but it’s all an illusion, as the power of her love has been undermined, despite her best efforts.  She’s an appealing, easily redeemable character, yet her disappointment comes at a price, as the past has been hastily disposed, victim of the relentless pursuit of progress.  She has no desire to match the frenetic, modern pace of life, existing in a more languid state, perhaps symbolizing the past, gradually losing her power and intensity.  The film comes to represent this strange period of transformation, becoming an identity in flux awaiting an anxiety-ridden Handover (with matters made worse after the Tiananmen Square massacre in 1989, eroding the confidence of residents), where the fascination lies with Fleur herself, as beauty is transient, yet Fleur’s eternal beauty is the kind that one yearns for, existing like a ghost dislocated in time and space, conjuring up images of old Hong Kong, “a city between the worlds,” a gateway between China and the outside world, where the golden age of Hong Kong is something that only exists in the imagination.

Of note, both Anita Mui and Leslie Cheung died fifteen years later in 2003, Mui from cancer while Cheung committed suicide, yet cinema allows them to remain stuck in time exactly as they were, having a cathartic effect on viewers.
Posted by Robert Kennedy at 12:01 AM