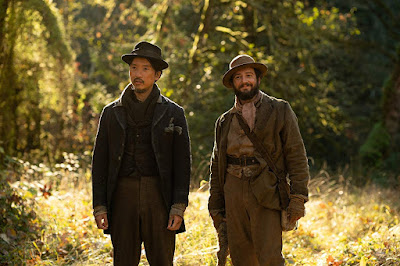 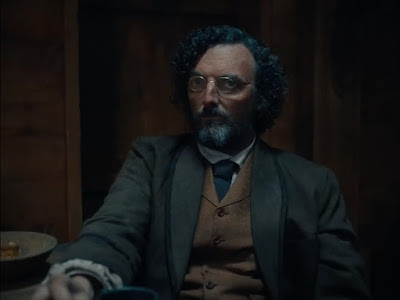 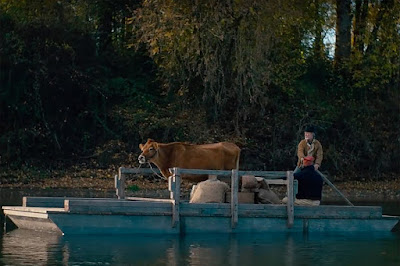 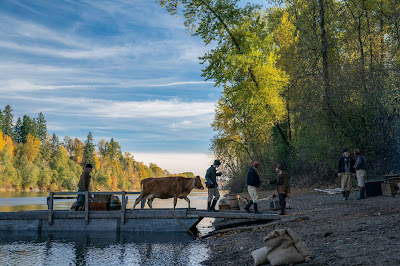 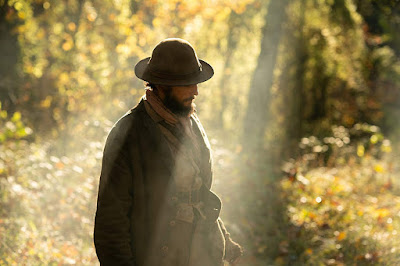 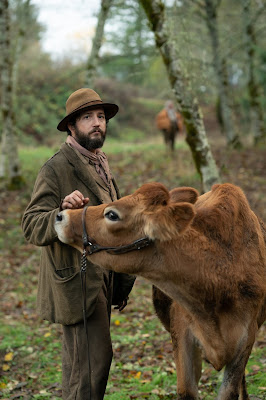 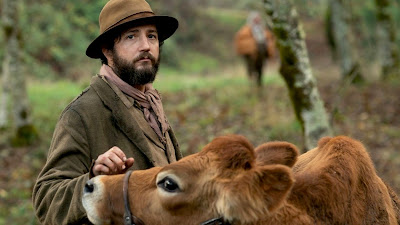 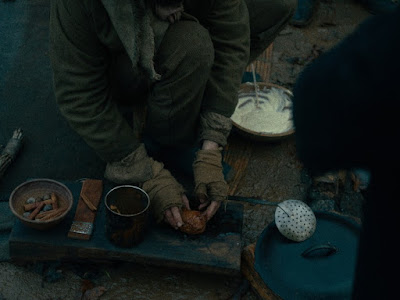 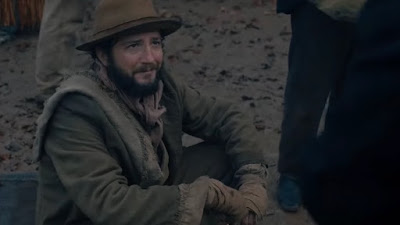 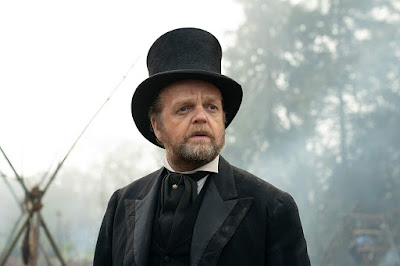 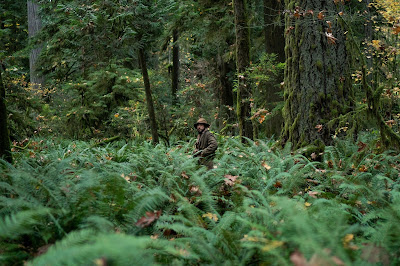 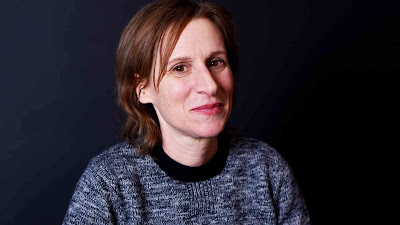 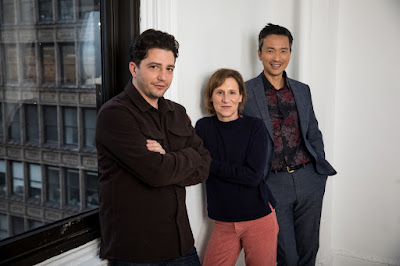 The bird a nest, the spider a web, man friendship.
—William Blake, Proverbs of Hell, from The Marriage of Heaven and Hell, 1793

This is an entirely different kind of film, even for Kelly Reichardt, who specializes in minimalist, low-budget productions coming from literary sources, unraveling like short stories, the picture of restraint, yet veering into near wordless depictions.  Very much in the same vein as her previous film, Certain Women (2016), yet transported to the era of early Western settlers in the Pacific Northwest, just barely scraping out a story, deconstructing the rugged John Wayne and Clint Eastwood stereotype of Western masculinity, expressing a quieter and more genteel presence, yet holding little tension or drama whatsoever, while releasing viewers at the end into a state of ambiguity, as there’s really no beginning or end to this story, it’s more of a brief window into an untold history, revealing only fragments, like a broken memory, not really leading anywhere, but using cinema for instructive purposes as a power of suggestion, offering a visualized alternative to the mythology of Western lore.  What’s most peculiar is an opening shot of a barge floating down the Columbia River, clearly shot in the modern age, followed by a woman and her dog sifting through a riverbank, discovering the bones of human remains, then quickly retreating back into a different time period, perhaps revealing something about the history of the bones, telling a story history has forgotten, finding ourselves in the earliest 19th century settlements in the Pacific Northwest, an era with no existing photographs, with no signposts or indications – we are simply there.  For nearly all of her films, Reichardt has collaborated with Portland author Jonathan Raymond, setting her films in Oregon, in fact all but two, River of Grass (1994), with Reichardt co-writing her own screenplay set in the Florida Everglades (where she grew up), and Certain Women (2016), adapting several Maile Meloy short stories set in Montana.  This film is an adaption of Raymond’s 2004 novel The Half-Life, which tells two parallel stories on different continents in different time periods taking place 160 years apart, but this version includes only the earlier period.  Shot on digital by Christopher Blauvelt, Reichardt’s principal cinematographer since Meek's Cutoff (2010), this is the director’s fifth film shot in Oregon, using the box-shaped 4:3 aspect ratio preferred by fellow Oregonian Gus van Sant, set in the deep woods during the fur trapping days of the 1820’s.  The film relies almost entirely on an established rhythm and meticulous detail, countering and defying Western stereotypes of virile men against hostile forces, depicting Indians as savages who need to be wiped out, actions supporting the Manifest Destiny doctrine that American was founded upon.  In contrast, Reichardt’s film has little to no action at all, with Multnomah Indians blending into the landscape, not as hostile forces (they were eradicated from the region anyway not long afterwards by military force to make room for the arrival of legions of white people), but working as domestics, or simply acting on their own, selling or bartering their trade, the same as anyone else, trying to get by.

Few characters are introduced, with a noticeable scarcity of women, but one figure is Otis “Cookie” Figowitz (John Magaro), signed on as a cook for the rowdy fur trappers who show him a fair share of abuse, following their movements throughout the Oregon Territory, seen searching for natural ingredients in the forest, something edible, like mushrooms, where his foraging is a silent adventure, perhaps accompanied by quiet guitar strums, where the music written by William Tyler is completely unobtrusive, only appearing periodically, never interfering with what appears onscreen while complimenting the overall quietness of the picture.  When he discovers a naked man hiding in the brush, shivering in the cold, King Lu (Orion Lee), a Chinese immigrant on the run from some Russians who mean to kill him, his reaction is to shelter and protect him, offering him food and safety.  Even then the Columbia River was a major avenue of transport, people and goods, where a view from the shore often finds people floating downstream, including an absurdly surreal picture of a barge transporting a cow, bringing her ashore, the first in the territory, hearing talk that other cows were lost en route.  As we walk through a makeshift shantytown with a saloon and trading post, basically streets of mud with people living in shabby huts, the instant comparison is Robert Altman’s McCabe & Mrs. Miller (1971), especially when seeing actor René Auberjonois (who recently died in December) living in one of those shacks, a man who appeared in Altman’s film.  Few words are exchanged, as it’s all about establishing mood and atmosphere, eventually arriving in a saloon, where the soft-spoken Cookie tries to nonchalantly order a whiskey, seemingly out of place in a Wild West scenario, as is a giant mountain man who steps next to him carrying a basket with an infant baby (again defying the myths), getting ridiculed and viciously needled by a fellow patron, drink in hand, eventually handing the baby to Cookie while assaulting the agitator, both tumbling out onto the streets never to be seen again.  Out of the darkness steps King Lu, now attired handsomely, re-introducing himself, offering to share a bottle of whisky if Cookie would like to join him, as he lives on the outskirts nearby.  And this is the beginning of a beautiful friendship, where little from the past is explained, or even referred to, as much of the story is simply left untold (like what happens to the baby).  Nonetheless, the two men hit it off, seemingly complimenting one another, where Cookie helps sweep and spruce up the place, gathering wildflowers, and eventually offering to cook, where he has a sudden urge to make biscuits.  When the idea for milk is matched with that image of a cow, only one thought springs to mind, milking her surreptitiously under cover of the night.

The pair are basically a couple of luckless drifters, but Cookie’s baking skills actually lead somewhere, concocting a batch of oily cakes, which are muffins fried in lard, very tasty to a bunch of outdoor frontiersmen only too happy to pay for a taste, rapidly selling out, returning the next day, and it happens all over again.  A successful partnership and enterprise, Cookie makes the cakes while King Lu, with the shrewdness of a con man, sets the price and collects the money, developing a certain notoriety in the territory, as word spreads quickly.  In no time, one of their customers is a local governor (Toby Jones), a dapper English gentleman (the owner of the cow, charging him double the price) who finds them delicious, eventually frying them in a pan right onsite, dripping honey and cinnamon on top, like actual bakery goods.  An apprentice to a baker in Boston, Cookie has learned his trade well, with King Lu thinking of taking their services to San Francisco, but they’d have more competition, where the question is whether they’re willing to push their luck.  As King Lu says, “History hasn’t gotten here yet,” however they’ve become extremely successful entrepreneurs in a wild and lawless region, so renowned that the governor would like their services at an upcoming tea party, where he intends to baffle and perplex a British Captain (Scott Shepherd), who finds the region backwards and without any culture, never hearing the end of it, hoping to put him on the spot.  The difference between wild American frontiersmen and cultivated British officials is the wild men of the frontier eat and simply walk away, while the British officials ask questions, curious how something so patently delicious arrived on these uncultivated shores.  Despite the success of their treats, lingering questions remain unanswered, drawing unwanted attention to them, and one thing leads to another, placing our duo in potential jeopardy, leaving their fates to the winds.  Yet the means of communication at the party may be the most curious aspect of the film, countering the myth in Westerns that Indians are dangerous and hostile, as the governor’s wife (Lily Gladstone, Blackfeet and Nez Perce) is an Indian, both surrounded by Indian servants as well as a venerable Chief, Gary Farmer (Aboriginal Canadian) from Jim Jarmusch’s Dead Man (1995), an invited guest, with the wife interpreting the back and forth conversation, where Indian culture becomes an integral part of a civilized discussion in this backwoods territory.  Using Indian linguists and historians from Grand Ronde, the film aspires to authenticity, though not to the extent of Jarmusch’s film, where Farmer is a lead character (along with Johnny Depp), mysteriously transposing not just Indian language and culture but the mystical spiritual elements into the storyline.  Here the mix of Indian culture into an American independent film is compelling, but Jarmusch makes the First Nations culture the centerpiece of the film.  Despite plenty of laudatory critical acclaim for this film, it may be one of Reichardt’s least engaging efforts, and the story is so sleight there’s almost no narrative at all, largely driven by chance encounters, dramatically inert from start to finish, yet this buddy movie counters the notion of Wild West masculinity and certainly accentuates the luscious green landscapes from the natural splendor of the region.
Posted by Robert Kennedy at 12:00 AM