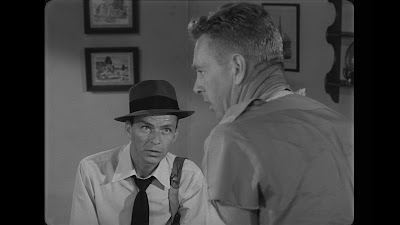 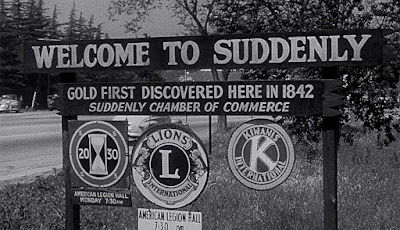 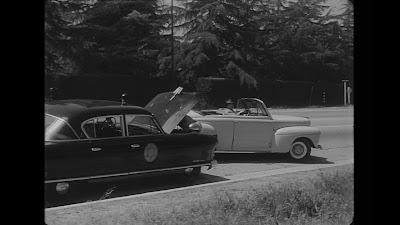 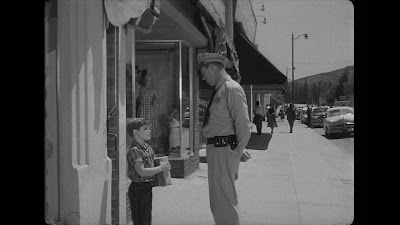 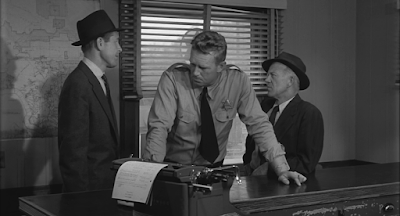 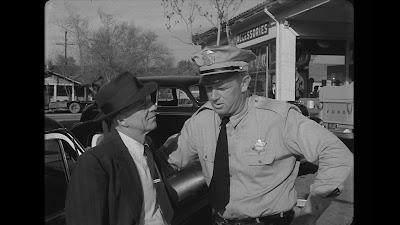 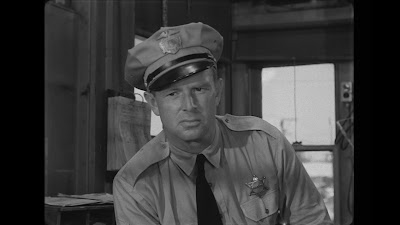 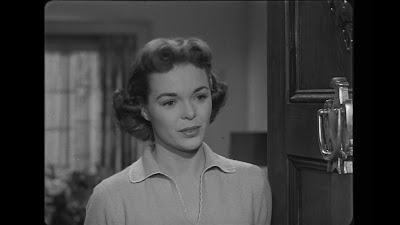 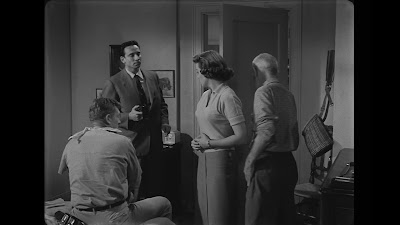 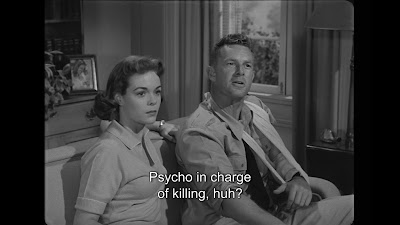 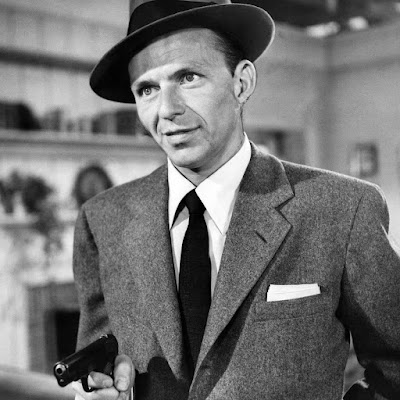 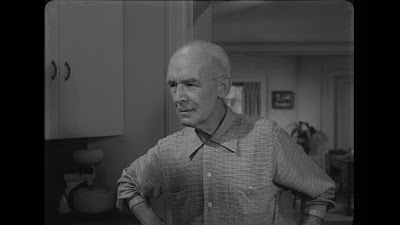 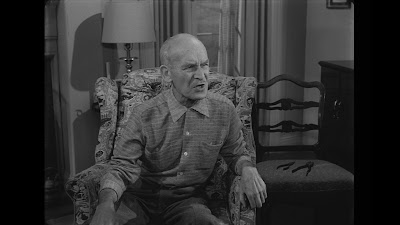 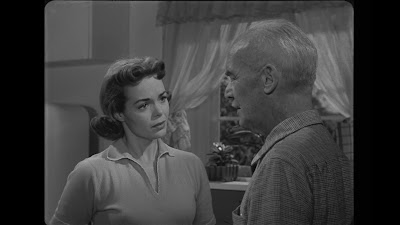 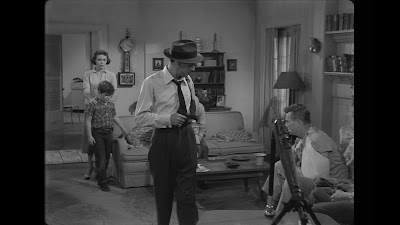 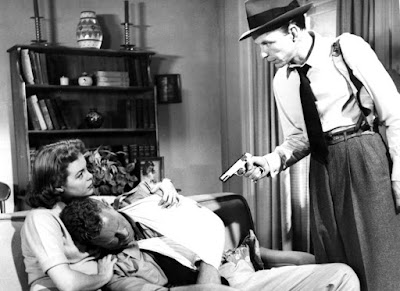 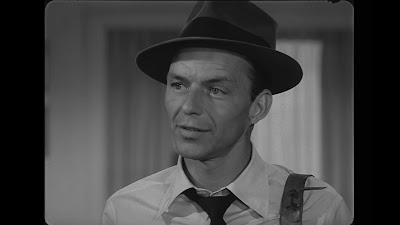 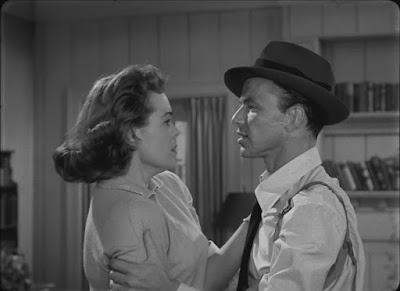 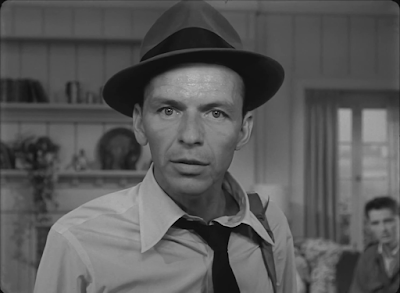 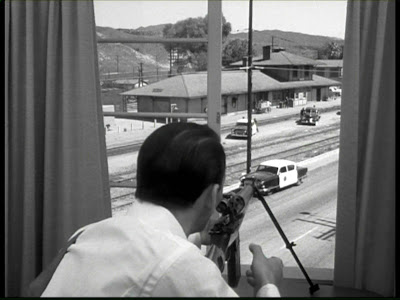 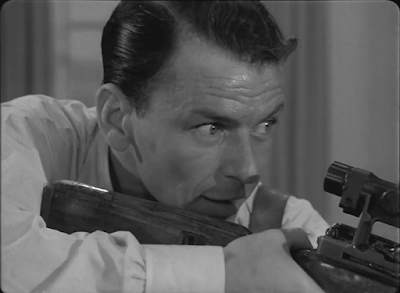 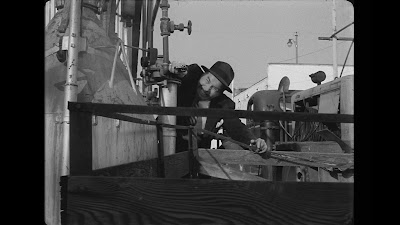 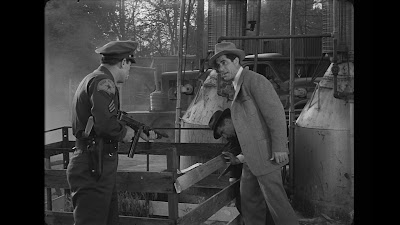 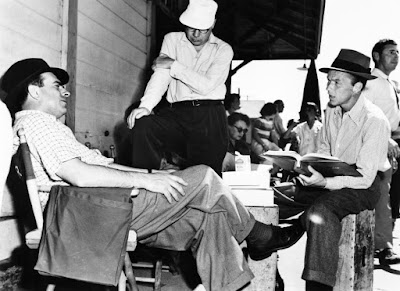 Director Lewis Allen (left) on the set with Frank Sinatra 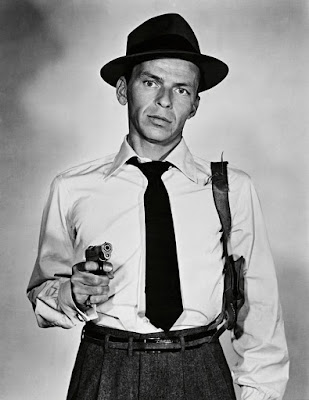 He didn’t mean to wing you.  He meant to blow your brains out.
—Johnny Baron (Frank Sinatra)

A heavy-handed, overly contrived morality play about the use of guns becomes a preachy exercise about the killing of the President, the film Lee Harvey Oswald supposedly watched days before assassinating President Kennedy (amusing speculation, of course), where the resemblance from fiction to reality is the most starkly eerie aspect of the film, especially the similarities with the elevated angle of the shot.  Criminologists, however, believe assassins are influenced more by real-life events than fictionalized portrayals on film, though director Stanley Kubrick himself, after receiving death threats, pulled A Clockwork Orange (1971) from British distribution, known for its graphic depiction of youth violence, with some believing the film was an incitement to violence, so it never played in Great Britain again for the next 30 years until after Kubrick’s death.  Following President Kennedy’s assassination November 22, 1963, this film and John Frankenheimer’s THE MANCHURIAN CANDIDATE (1962) sat on the shelves for years, both curiously starring Frank Sinatra, who was close to the Kennedy family and may have pulled the strings to have the film withdrawn from distribution, and while there is no evidence to support this assertion, the public was not clamoring to revisit such a realistically-inspired Presidential assassination attempt, almost certainly generating fewer advertising dollars.  The rights to this film were never renewed, falling into public domain and widely shown on bad prints over late night television screenings, now digitally restored.  A low-budget thriller that was a box office success, the film is set in a peaceful rural town situated along the railroad tracks somewhere in Southern California, the town of Suddenly is an idealized portrait of small-town America, where neighbors know everyone else and social activities revolve around Sunday church services.  Little, if any, crime exists in this small hamlet, where nothing is out of place, viewed as the perfect place to raise children, as it’s a very family friendly atmosphere.  The casting is a bit surprising, as tough guy Sterling Hayden is Sheriff Todd Shaw, out of his element here in a town where nothing really happens, so his job of keeping the peace is a no-brainer, with each day resembling the last, growing bored with the routine appearance of a safe and secure community.  But a telegraph message changes all that, with an announcement that the President of the United States is expected to visit the town in a spontaneous train stop at 5 pm later that day, with a Secret Service detail arriving ahead of time, along with an attachment of Highway Patrol vehicles.  Also arriving, unexpectedly, are three men claiming to be FBI agents, permitted entrance into a home overlooking the train station, but it soon becomes clear they have other intentions.

While the sunny opening is surprisingly upbeat, bearing a resemblance to the aw-shucks innocence of the fictitious town of Mayberry in The Andy Griffith television show (1960 – 68), Sheriff Shaw greets young 8-year old Pidge (Kim Charney) on the street, trying to imagine what he’s thinking about, and it turns out to be a cap pistol that he sees in a shop window, something his mother forbids, refusing to allow him to see war pictures as well.  Ellen Benson (Nancy Gates) hates guns, still brokenhearted over losing her husband in the Korean War, but when the kid says he wants to be just like the sheriff when he grows up, Shaw buys the kid a cap pistol anyway, against his mother’s wishes, which starts a brief quarrel in the grocery store, which continues when she gets home, living with her retired father-in-law, Pop Benson (James Gleason), who warns her not to overprotect the boy.  With guns at the center of the controversy, the film elevates the stakes with the arrival of imposter FBI agents, led by Frank Sinatra as John Barron, in his first role after winning the Best Supporting actor award for FROM HERE TO ETERNITY (1953), basically robbing Montgomery Cliff, who turned down this role, the first time Sinatra was cast as a heavy (the only time he plays a villain, a very curious choice, and a role he later regretted), as these are three outlaws who plan on shooting the President.  Their presence turns this into a home invasion film, a predecessor to Michael Haneke’s Funny Games (1997), the ultimate in that genre, basically sabotaging common norms.  Dan Carney (Willis Bouchey) leads the Secret Service detail, ordering a check of all the storefront business windows facing the tracks, ordering them closed just prior to 5 pm, while he and Shaw visit the house on the hill overlooking the tracks, which happens to be Pop Benson’s house, a retired Secret Service agent and former boss to Carney.  The friendly reunion leads to disastrous results, as Carney is shot and killed immediately upon entrance, while Shaw takes a bullet to the arm, shattering the bone, with Barron quickly taking control of the situation, setting up a sniper’s rifle at a living room table overlooking the station, revealing their intentions, something he’s all too proud to announce, along with the fact he won a Silver Star during the war mowing down 27 German soldiers.  The relish and satisfaction he takes in his own ruthless ability to kill is not for the faint of heart, turning into one of the most repellent killers in American cinema, though Sinatra is a weak link here (despite stellar reviews), never possessing the misfit Anthony Perkins psychopathic personality required, instead playing it straight, where he’s more of an overall asshole, like a Mafia hitman wearing his Fedora indoors, an unlikable guy with no regard whatsoever for others, including his partners, treating them equally with contempt.

Actually shot in Saugus and Newhall, California, just off the highway north of Los Angeles, there’s nothing distinguished about the way this film is shot, never rising to film noir, feeling more like a play, with the characters all stuck in the same room, growing confined and claustrophobic as time passes slowly, yet Shaw discovers Barron’s weakness is his love for gab, as he’s something of a braggart, so he challenges his assertions, questioning whether he even knows what he’s talking about, asking him to detail his experiences in the war, discovering much of what he’s described sounds delusional, like it was conceived in a psychiatric medical tent for those unfit to serve, where Hayden is excellent in digging under the supposed veneer of masculinity, exposing Baron’s pathological personality, where he’s addicted to killing, continually trying to outwit him and force him into a mistake.  Yet at the same time, middle class tranquility has been traumatized by this home invasion, turned into an amoral spectacle, with Barron boasting that he has no feelings, none whatsoever, so he won’t be distracted from his mission, which he’s being paid handsomely for, supposedly $500,000 to kill the President, half received already, the other half to come after the job is completed, with no clue whatsoever who’s pulling the strings behind the operation, and he doesn’t care, looking out only for number one, himself, vowing to shoot the kid if anything goes wrong.  His blasé attitude about killing feels forced, almost like he’s lecturing his captive audience on the art of killing, arguably the only thing he’s good at, or enjoys, taught by the army how to kill, never able to make the transition back to civilian life, deprived of any moral center, where he’s not convincing anyone, including himself, but rambles on anyway, as if he needs to continually build himself up, displaying a desperate desire to be somebody, to make a name for himself.  He’s a thoroughly despicable man that the others loathe, where it’s rare to see such a stark moral contrast, with the story emphasizing power is centered around the gun, as the others are completely powerless and ineffectual without it, with Sinatra emphasizing his position by staring straight into the camera directly at the viewing audience.  While the film is typically sexist and a classic case of Cold War fear mongering, appealing to McCarthyist Republicans, suggesting commies lie under every doorstep that we have to protect ourselves from, challenging the notion of pacifism, it’s also a gun lover’s dream, feeling emboldened and empowered holding a gun, giving one almost superhuman powers, where you could even envision killing the President of the United States, realized a decade later by Lee Harvey Oswald, a relative nobody, and the nation has been crawling with guns ever since, as if that’s the wholesale answer for all our problems.  It’s a weird sadistic fantasy that paralyzes our conception of peace and tranquility, as life will never be quite the same for victims of gun violence.  It’s a sickness that our country has never come to grips with, like racism, and inequality, but this overly simplistic, one-sided gun sermon falls on deaf ears.
Posted by Robert Kennedy at 12:00 AM