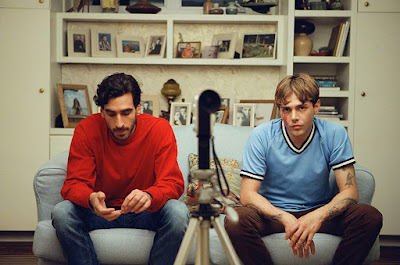 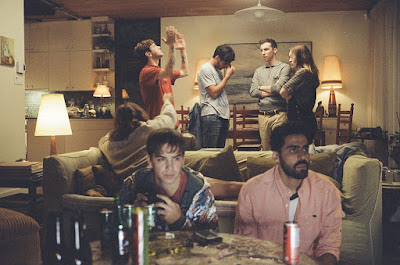 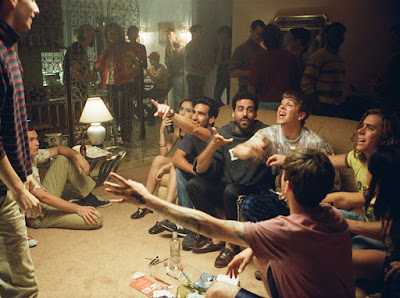 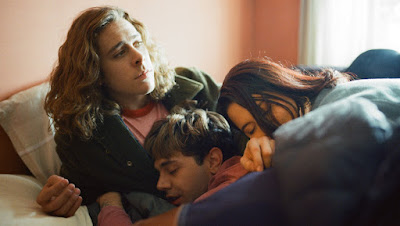 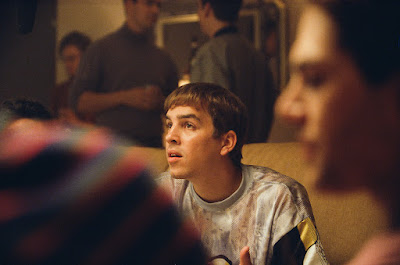 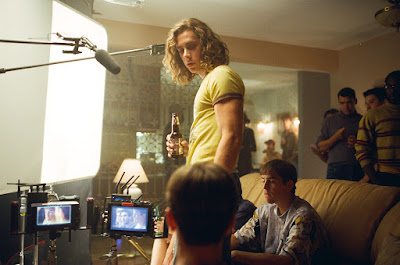 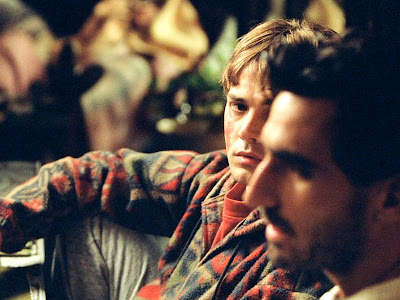 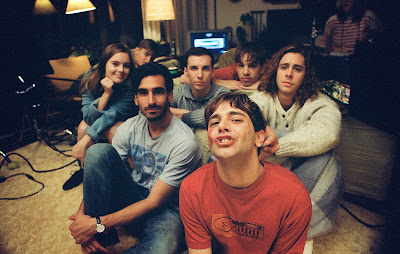 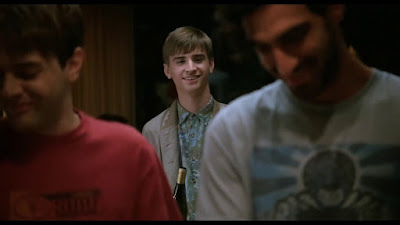 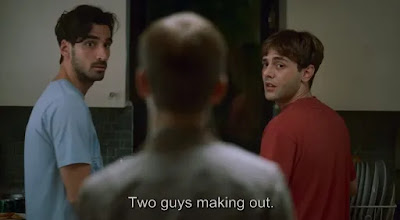 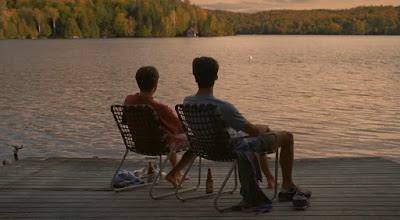 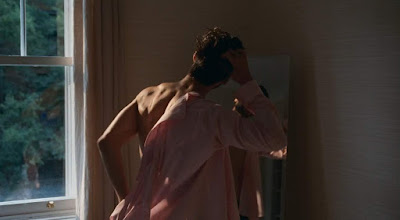 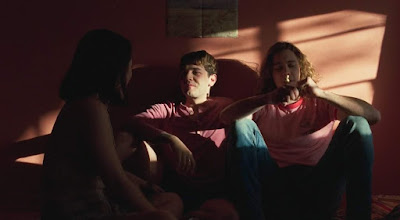 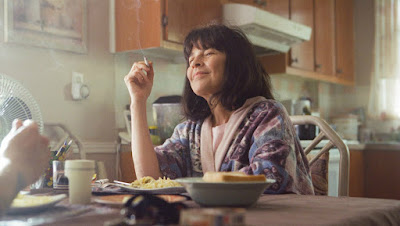 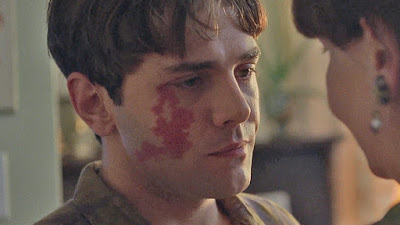 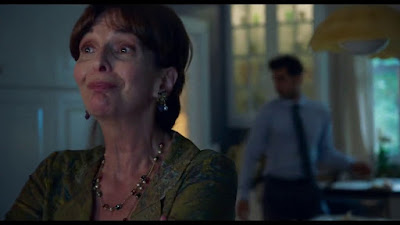 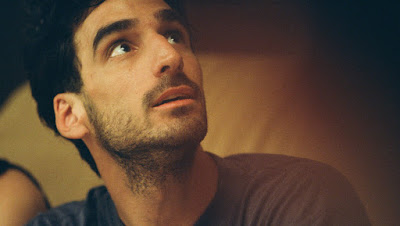 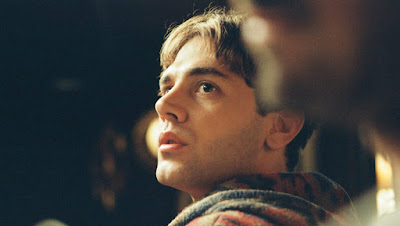 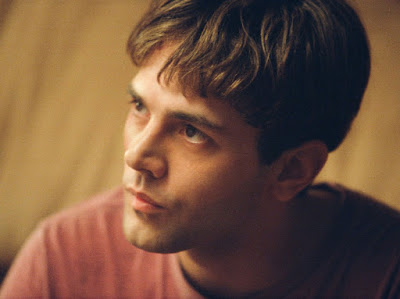 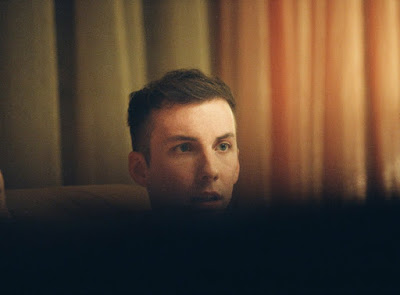 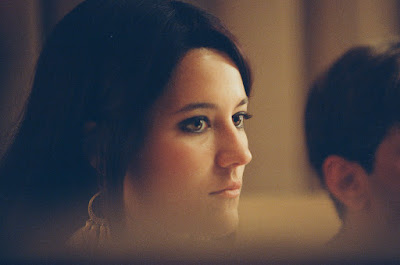 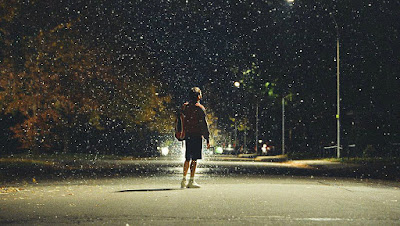 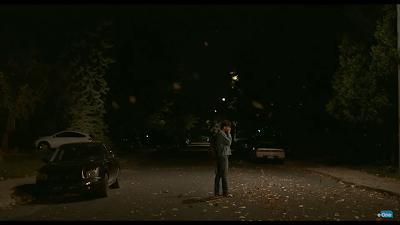 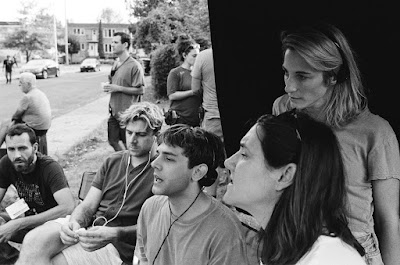 Director Xavier Dolan on the set

Using a more measured and restrained style, Dolan offers an unusual love story, told almost entirely by the power of suggestion, through oblique looks, lost concentration, and mishaps, where there’s a consuming need to talk about underlying hints of homoeroticism, yet the two entitled characters seem to be doing everything in their power to avoid the inevitable, as the film instead zeroes in on the zillion tiny things they do to avoid responding to their innermost burning desires, becoming sadly lost and melancholic.  Dolan’s trademark signature is written all over this film, accentuated by high-powered verbiage, dominant mothers, invisible fathers, changing film speeds and aspect ratios, while capturing the underlying discord in relationships.  The film it most resembles is 2014 Top Ten List #7 Tom at the Farm (Tom à la ferme), though without the Hitchcockian overtones, examining the repressive ramifications of avoidance, which in Dolan’s world is filled with cruelty, pain, humiliation, and unending loneliness, emotions normally associated with Fassbinder, but Dolan does it differently, throwing out the Sirkian melodrama, creating something more alienating and modern.  While equally as toxic, this film is more restrained, featuring Dolan’s fiercely independent style, filled with those signature moments that only Dolan seems to provide, what stands out in particular is an extraordinary, almost Sirkian use of classical piano music written by musical composer Jean-Michel Blais, Jean-Michel Blais - Le lac (Live / From 'Matthias & Maxime' Soundtrack) YouTube (3:13), becoming a stand-in for repressed emotions, recalling something the director said in an interview after he made 2015 Top Ten List #1 Mommy, where he claimed at the time, Xavier Dolan: ‘I’ve never experienced love as something calm and tender’.  Once more placing Dolan in front of the camera as one of the lead characters, again writing his own material, the film is a furious explosion of misdirection, where one is attuned to a personal longing, yet except for a few brief moments it is avoided altogether, with heartbreaking results.  What makes this different from his other films is that it features a group of male friends, who happen to be best friends of Dolan in real life, yet their group association is a paramount understanding of their own identity, reminiscent of RETURN OF THE SEACAUCUS SEVEN (1979), featuring a gathering of old friends at a lake house to celebrate a friend’s birthday, mostly smoking pot, yet each individual is part of a collective, which acts as a cohesive whole, featuring plenty of rapid-fire wit and insider jokes, where they routinely drink and play word games, laughing at the ridiculous moments when someone grows seriously reflective, which may be an attempt to separate themselves and form their own unique identity, but the group never lets them get away with it, teasing each other relentlessly, almost to the point of cruelty.  Dolan is Max, a working class bartender who’s leaving for Australia in two weeks, expecting to be gone for two years, so he has some trepidation about his impending departure, feeling even more anxious the nearer he comes to the expected day, told in chapters months before, two weeks out, a week out, and finally one day before departure, as there is so much unfinished business he must attend to before he leaves, so the pressure building on his shoulders is enormous.

Matt (Gabriel D’Almedia Freitas in his first feature film) and Max have been best friends since childhood, yet they exert completely different personalities, as the more pompous and culturally privileged Matt works in the corporate world, dresses in suits, and exerts an air of confidence that can be viewed as arrogant superiority, though he often remains aloof much of the time, while Max is much more down to earth, easy going and likeable, exuding a sense of affable charm, while displaying vulnerability and an open concern for others.  Rarely confrontational (except with his mother), Max gets along with just about everybody, but is especially relaxed and comfortable around Matt, easily fitting in with his more rowdy group of friends, while Matt may be outgrowing many of them.  What gets things started is Matt’s rude habit of correcting people, growing very anal with his verbiage and correct pronunciations, where he gets called on it, but refuses to believe, going so far as to make a bet with the host of a group outing, Rivette (Pier-Luc Funk), subject to video confirmation, which proves he did.  The terms of the bet are not announced until afterwards, with the loser having to perform in a one-minute scene from an experimental film Rivette’s younger sister is making, which she amusingly describes as a blend of expressionism and impressionism, taking a poke at Dolan’s own unconventional film style.  Erika (Camille Felton) is that typically annoying younger sister, speaking a kind of Valley Girl dialect, Québécois French mixed with English, which drives her brother up a tree.  Max has already volunteered, but what the two don’t realize is that the shot consists of the two men kissing.  While playing coy, pretending none of this matters, as it’s only a bet, the impact of the kiss, which is never shown, reverberates throughout the rest of the film, sparking hidden desires and feelings neither one realized they had.  While they had kissed earlier in high school, each has a differing recollection, with Matt claiming to have forgotten it altogether.  Yet it’s Matt who’s perhaps most affected, struggling to focus afterwards, losing his concentration, allowing his mind to wander, missing out on a promotional opportunity being handed to him through sheer disinterest.  While this is not really a gay film, though some may view it that way, as it certainly explores internal conflicts that gay people routinely experience, actually normalizing the gay experience, but it’s more about unrequited love, remaining undeveloped and repressed, as neither one wants to admit what they actually feel, finding it hard to concentrate on anything else, going to great lengths to avoid each other, attempting to bypass the obvious.  The beauty of this film is that it stays under the surface, like a subliminal work, using body language, quick glances, and noticeable screen space to express the unchartered emotional abyss.  Among the more riveting scenes show Matt awakening early the next morning, going out for a swim on the lake, with the hidden emotions expressed by dramatic piano music that seems to accelerate into a furiously probing intensity, eventually losing direction, ending up on the other side of the lake, having to make a Herculean effort just to make it back safely.  This near-suicidal sense of physical and emotional exhaustion are prominent themes throughout Dolan’s work, as his characters find themselves alienated, caught up in confusion, detoured, sidetracked and disconnected from reality, often forced to endure threats and physical hardships, expected to do the impossible, having to summon deep reserves of emotional strength just to survive.

Once again Dolan turns to actress Anne Dorval as his dysfunctional mother, a role she’s played since his acclaimed first film I Killed My Mother (J’ai Tué Ma Mère) (2009), displaying her typical neurotic routine, though here, displaying gigantic mood swings, most likely exacerbated by alcohol and a history of substance abuse, she is closer to a psychotic danger, both to herself and to others, repeatedly threatening and humiliating her son, violently striking him, then mocking him, sarcastically calling him a cowardly little girl when he walks away from her after an intensively violent episode, with Max acting as her legal guardian, paying her bills and providing in-home care and supposed stability, yet she’s such a headache, starting each day with a cigarette and a can of beer.  Max has to transfer guardianship to his aunt before he leaves, which threatens his mother even more, taking it out on her son, using his face for target practice.  There’s another unspoken aspect to the film, as Max has a facial birthmark on one side of his face, yet no one mentions it, but it’s a sign of personal shame and embarrassment.  In a bathroom segment, he looks at himself in the mirror and there is no birthmark, envisioning himself as he’d like to be seen, but it’s only in his imagination.  Much of the film plays out like that, accentuating personal moments that keep shifting between the lead characters, adding a degree of intimacy, often enlarged through the musical selections.   Among the more humorous moments, Rivette is seen deftly playing a classical masterpiece on the piano as many of his mother’s friends arrive for a party, Franz Schubert, Impromptu No. 4 A-flat, D. 899, Alfred Brendel YouTube (7:01), their group constantly chatting, paying little attention, eventually moving out of the room, with Rivette glaring into the camera and asking the existential question, “Who am I playing for?”  Few directors interject pop music with the ease of Dolan, who has always had his pulse on youth culture, providing a pulsating energy, made even more effective by Dolan’s jarring edits, where the transitions between scenes are often electrifying, Looking for knives / Matthias & Maxime YouTube (6:05).  Shot by André Turpin, Dolan’s regular cinematographer since TOM AT THE FARM (2014), he infuses the film with blazing colors and a smoky hue, with the two characters finding themselves caught up in the moment, finally acting upon their innermost impulses in a downpour of rain to the sounds of Phosphorescent - "Song for Zula" (Official Audio) – YouTube (6:10), seen from the outside through a tiny window, yet even then, caught up in a rush of emotion, the scene never plays out as expected, interrupted by a change of heart, where recurring doubts offer a disturbing commentary on affection, “And then I saw love disfigure me into something I am not recognizing,” finding it more than Matt can handle, who’s too straight-laced to see himself otherwise.  Yet it’s his cruelty that seems most apparent, at one point describing Max as an “ink stain.”  While it’s Dolan’s film, most of the anguishing internal struggle belongs to Matt, where self-realization is something he simply does not possess, curiously lacking an ultimate grasp of reality, living a lie, while admitting to nothing, shielded by emotional paralysis and one’s own unfathomable delusion, where the fear of losing control seems to be the driving motivation.  The open road represents something different to each man, with Max craving the idea of freedom, while Matt dreads the loss of a friend, both dancing around each other’s emotions, choreographed as a series of near misses, both immersed in a restless anxiety that defines the film.  With soul-wrenching honesty, the film explores every avenue of deflection, every escape, where the sweetest moment is Max’s discovery of a drawing Matt made of the two of them at the tender age of seven, remarkably genuine and openhearted, which expresses who they were and who they would always be, if they could only figure it out, running into roadblocks and complications that continually deter them from realizing their dreams.
Posted by Robert Kennedy at 12:45 AM