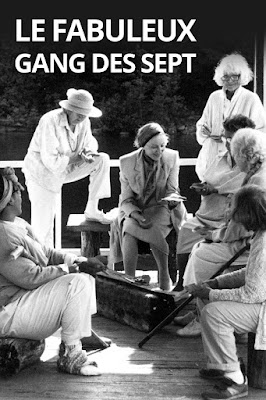 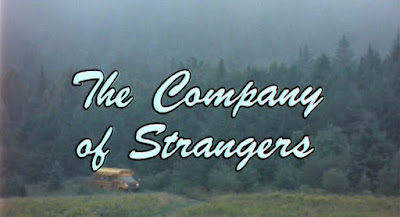 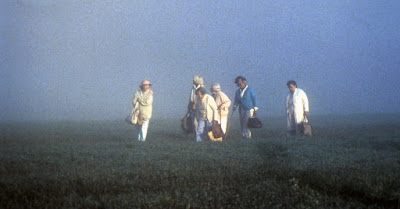 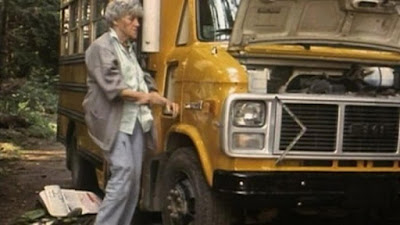 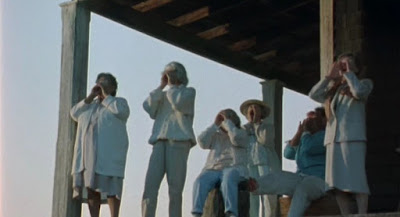 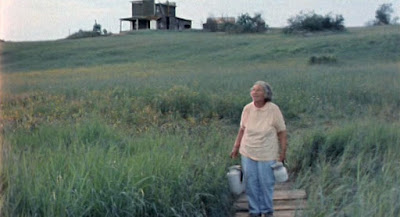 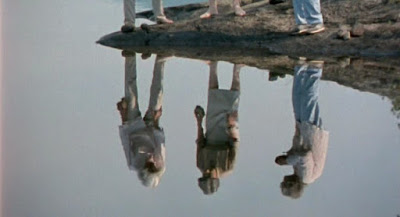 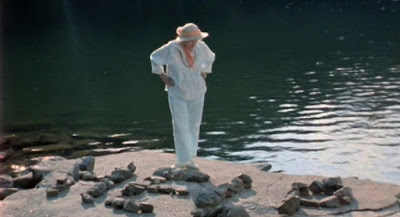 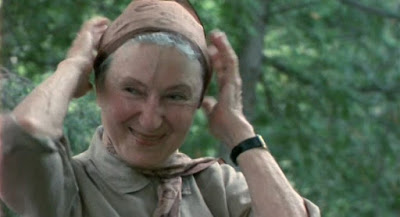 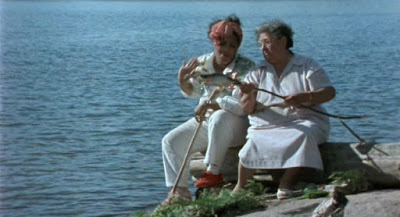 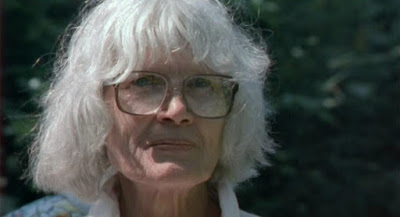 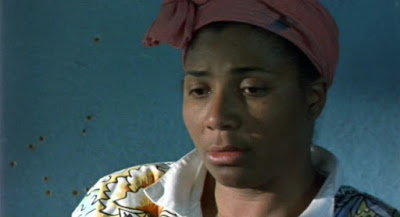 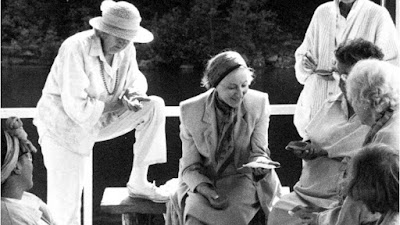 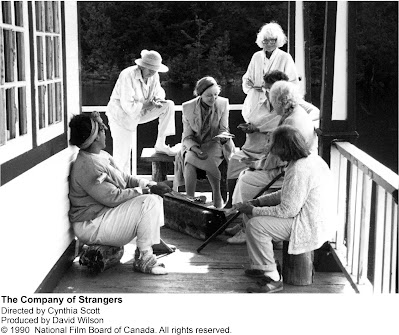 While Scott has a history producing and directing documentary shorts, this is a unique mix of documentary and fictionalized film, beautifully edited, where the actual lives of the seven elderly women (aged 68 to 88) appearing onscreen figure into the content, as their lives are explored with a curious sense of wonder, offering a pastoral beauty from the remote landscape, shot by cinematographer David de Volpi (mostly shooting documentary shorts), becoming a strangely beautiful film accentuating individualism through their radical differences.  Ostensibly an observational film about eight Canadian women (including the younger bus driver) stranded in the Québec countryside after their bus breaks down on a sightseeing trip, finding shelter in an abandoned lakeside home, openly discussing their lives as they pass the time, providing an interior narrative while exquisite compositional shots reveal the magisterial grandeur of the surrounding natural world, with each of the women using their own names, all non-professionals except one (the youngest), loosely scripted by Gloria Demers, unsentimentalized, at times feeling like a Chekhov play, allowing plenty of autobiographical improvisation from the cast.  At the time of the film’s release, it was the highest-grossing film in National Film Board history.

Meigs published a book about her experiences making the film, In the Company of Strangers, in 1991.  Using an abstract opening and closing montage, figures may be seen emerging from a thick fog, temporarily becoming the central focus until eventually disappearing back into the fog from whence they came, a metaphor for the transience of our existence, yet their time spent onscreen feels invaluable, one of the few films offering profound insight into aging, told with a feminist perspective, yet there’s nothing politicized, becoming more of a personalized introspection, where at different points throughout the film, a montage of still photos from each woman’s life is shown, which is hauntingly powerful.  It was at the request of Constance, the most elderly among them, that they took a detour, as they weren’t far from her childhood summer home, leaving them abandoned in the middle of nowhere, with no people or phone service in the vicinity, no contact with the outside world, where they had to make the best of it, finding old unused mattresses in a shed, also layers of straw to provide a sleeping cushion, though they could expect some restless nights, while each day Catherine makes attempts to repair the bus with an emery board.  Conspicuously absent from social relevance in a modern society that idealizes youth, cinema has neglected this age group as well, as other than the elderly couple neglected and abandoned in Ozu’s TOKYO STORY (1953), David Lynch’s rambling Disney road movie THE STRAIGHT STORY (1999), or Sarah Polley’s stunning exposé on Alzheimer’s Disease in Away from Her (2006), very few films come to mind, most focusing on mental or physical deficiencies, where this is one of the few that actually puts a positive spin on aging, a neglected film that needs to be restored and rediscovered.  Finding themselves literally engulfed by an Edenesque pastoral paradise, the setting provides a lush allure of contemplative silence, where they are free to walk and explore the grounds, some spending their time reading, while others try to identify various birds, or draw them in a notebook, while in the evenings they tend to play cards.  The personalities of each woman begins to emerge as they interact with each other, often through an interview style, revealing fragmented stories expressing personal revelations, as they each take their daily allotment of pills, sharing the remains of what little food they have, showing signs of anxiety or fear of the unknown, including their nearness to death, with Constance acknowledging, “I’m going to die soon anyway, and I’d rather die here than in a nursing home or hospital.”  No longer able to hear birds singing, which echo her own calls, at one point we see her dropping her remaining pills in the lake, as if resigned to the inevitable.  Away from their familiar routines, they tend to act differently, while also providing a support network, listening to each other’s stories, hearing what they’ve gone through in life, offering camaraderie and friendship.

Easily the most haunting aspect of the film is the recurring use of Schubert’s Adagio, Schubert - String Quintet in C Major, D. 956, Adagio - The ... YouTube (14:25), one of the most profoundly beautiful compositions ever written and a chamber music masterpiece, completed just weeks before the composer’s death.  Sometimes music will forever be associated with particular films, like the Schubert Andante movement from Kubrick’s BARRY LYNDON (1975), Barry Lyndon • Piano Trio in E Flat • Franz Schubert - YouTube (4:19), Arvo Pärt’s Spiegel im Spiegel in Gus van Sant’s GERRY (2002), Gerry / opening scene - YouTube (5:06), or California Dreamin’ by the Mama’s and Papa’s in Wong Kar-wai’s CHUNGKING EXPRESS (1994), Chungking Express - California Dreamin' [HD] YouTube (2:38), to name just a few, with music providing a profound eloquence that only enhances the director’s message.  Much of the film plays out as a memory play, with ordinary women telling their stories, yet the sum total is a compelling drama, among the best features in cinema to comment upon aging.  Isolated from the comfort and anonymity of their everyday lives, where they are largely ignored by society, each has been defined by their own personal circumstances.  Mary, for instance, grew up as part of a “Secret Generation” hiding behind closet doors as a lesbian, which was totally frowned upon during America’s 1950’s conservatism, but learned to express herself as an artist.  Alice and Winnie had to work low-wage jobs to support their families, with Alice recalling her days on the assembly line of a whisky distillery, describing it as a “sleepy job,” as she had trouble with the monotonous tedium of the job, while Winnie, a former belly dancer, worked at a cigarette factory.  In each, women were forbidden from partaking in the product, frisked every night as they left the job to prevent theft, though men were allowed a weekly allotment of cigarettes.  The youngest of the bunch is Michelle (the only professional actress), the more liberated black bus driver, who takes a curious interest in the women, working to bring Beth out of her shell, as she’s very prim and proper, her blouse buttoned to the top, even out in the woods, hiding behind a façade of manners and politeness, never really comfortable in her own skin, remaining shy and deferring.  Constance is a regal presence, so dignified and refined, without a hair out of place, always looking like a million bucks, associated with the elegance of classical music, yet she may be the only one prepared for the inevitable finality of it all, as if finding her childhood home made her life complete, coming full circle.  Perhaps the most aloof, Constance is used to spending time alone, where she may have simply outlived her circle of friends and family, finally finding peace and something close to happiness, where she doesn’t really want to leave.

Much of the film feels as if it has been frozen in time, offering a time capsule of these eclectic lives, and a sense of yearning, where something is still expected of life.  Despite their physical limitations, which certainly slows them down, they move at their own pace, devising various survival strategies, like spelling out “Help” with rocks or generating smoke signals, with Alice turning her pantyhose into an old-fashioned fish net, while Mary and Cissy throw stones at fish near the shoreline, hoping to stun them into submission, like bears, with little success.  Catherine goes on a frog hunt, finding food and needed nourishment for the group, but refuses to kill them, leaving that task to others.  Cissy, in her high-pitched voice, nearly blind as she peers out over her glasses, recalls her traumatic experiences in London surviving the German bombing blitzkrieg during the war while hovering in underground shelters, receiving a jolt hearing each individual blast exploding overhead, wondering when it would all be over.  She was also paralyzed from a stroke, forgetting how to speak, having to relearn everything all over again, perhaps reevaluating her life from her own sense of loss.  More than any of the others, she seems to like everyone, displaying an air of positivity, yet has a fear of being left destitute and alone.  All have experienced profound loss in their lives, but they remember dance halls with faces of young, good-looking men, with Alice marrying one of them, eager to start a life, but the enthusiasm and affection she initially felt was met with disappointment and loss, as he was just not the right guy.  Still, she fondly recalls her electric experiences in dance halls, as does Winnie, both dancing to a chorus of old WWII memories, feeling young and vibrant again.  Despite the disappointments, life has not crushed these women’s collective spirit, where their kindness and authenticity rings true, bringing a rare gift to the screen, as they are not play acting, but simply recalling the best and worst years of their lives and then sharing it with one another, as they have little else to do, stuck in isolation.  As the youngest of the elderly seven, Catherine feels an obligation to walk out for help, particularly since she couldn’t repair the vehicle, and no one offered any objections, placing a great weight on her shoulders.  Perhaps what’s most unique about this film is how moments of quiet contemplation are built into the aesthetic style, romanticized with painterly landscapes, adding still and serene moments, where there’s a sense of accumulated wisdom, with viewers sharing in this collaborative process of living theater that materializes right before our eyes, offering a meditative feeling of growth and transformation, like a condensed version of the aging process itself, as so much is compressed into a small amount of time.  These memories and experiences still live with us long afterwards, making this a different kind of film, self-reflective, gentle and wise, where it’s likely to sneak up on you.