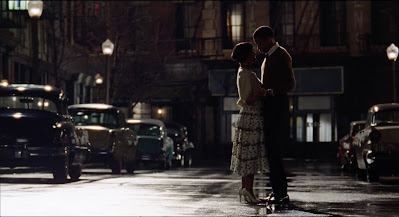 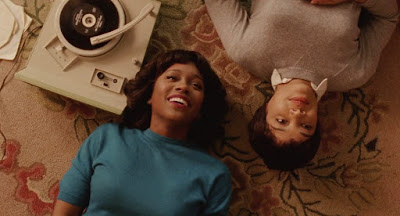 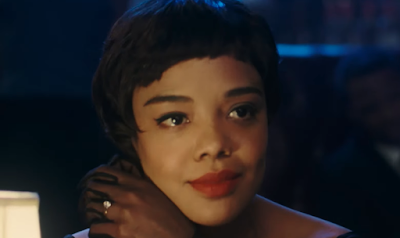 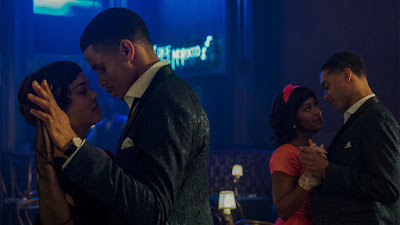 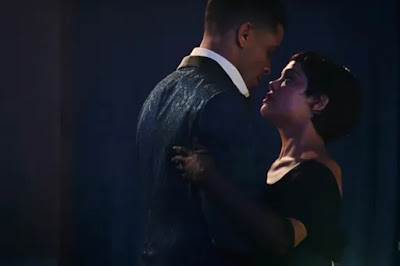 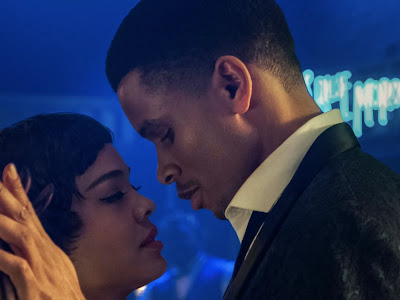 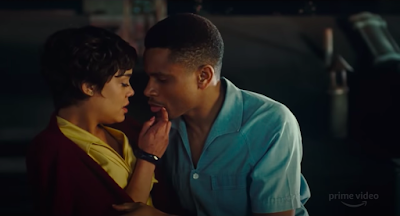 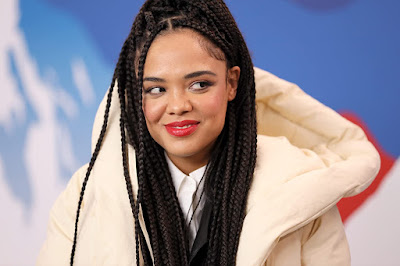 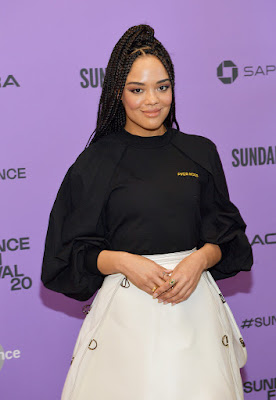 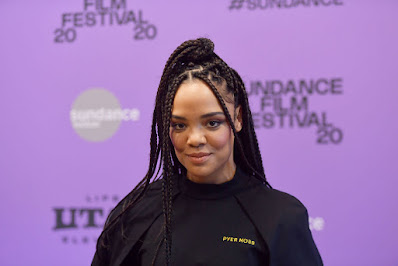 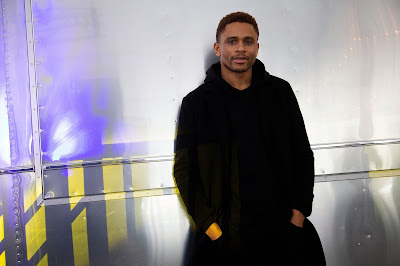 A good old-fashioned 50’s romantic love story shot on Super 16 mm, much of it told in flashback, jumping back 5 years from 1962 to 1957, coming out of the Sundance Festival, with tributes to Diahann Carroll, Nancy Wilson, and Doris Day, using a killer 50’s and 60’s musical soundtrack, in stark contrast to Fabrice Lecomte’s musical score that seems to emulate old Hollywood, starring Tessa Thompson, first seen in Tina Mabry’s MISSISSIPPI DAMNED (2009), a small indie film that won the Chicago Film Festival’s top prize but has barely ever been seen after that, more recently starring in Boots Riley’s Sorry to Bother You (2018) and Nia Costa’s Little Woods (2018), though she’s become a household name from appearances in recent blockbuster works like THOR: RAGNAROK (2017), AVENGERS: ENDGAME (2019), and MEN IN BLACK: INTERNATIONAL (2019).  Her costar is Nnamdi Asomugha, a former NFL cornerback drafted in the first round by the Oakland Raiders in 2003, an All-Pro four times in his 11-year career before making the transition to acting, following in the footsteps of other pro football players turned actors like Jim Brown, Fred Williamson, and Bernie Casey.  Given a glowing sheen from cinematographer Declan Quinn, this is a scrumptious looking film, beautifully illuminated at night where city streets are always wet, the film is set in Harlem in a sweltering summer of 1957 opening with Nancy Wilson singing NANCY WILSON The Nearness Of You YouTube (3:03), immediately surging with the sizzle of romance, with Asomugha playing an up and coming tenor saxophone jazz great named Robert Halloway playing in the Dickie Brewster Quartet, nicknamed B-Flat by an admiring white Countess (Jemima Kirke) who eventually becomes their manager, but he finds Sylvie Johnson working alone in her father’s record store, apparently spellbound by watching I Love Lucy on the television.  Immediately we find her two passions, a near encyclopedic knowledge of jazz music and an all-consuming passion for television.  Her father, Mr. Jay (Lance Reddick), an amateur fix-it man, seen failing miserably at fixing a small office fan, hires the young man on the spot when inquiring about a Help Wanted sign in the window, but only after Sylvie gives a long, convoluted explanation about how the sign is a bogus cover to explain her presence in the store, since her mother, Eunice Johnson (Erica Gimpel) runs a Harlem grooming school of etiquette and manners for girls and wouldn’t be caught dead with a TV in her own home, forcing her daughter to spend her afternoons in her father’s shop to studiously watch her shows, seen glued to the set, but the sign is there so no one thinks her father is too cheap not to hire anyone else.  Sylvie makes it clear she’s already engaged, that her fiancé Lacy (Alano Miller) is overseas serving in Korea, and she’s waiting for his return to get married.  Nonetheless, there is a spark between them, initially lit by an impromptu dance performance in the record shop to the tune of See you later alligator - Bill Haley and Comets YouTube (2:48), with Sylvie thinking she’s all alone, but Robert takes it all in with a smile, accentuated by an invitation to the jazz club to see him play, accompanied by her cousin Mona (Aja Naomi King), leading to an exhilarating evening spent together followed by a whirlwind summer, 1957 version: Sam Cooke - Summertime YouTube (2:22), made even more evident by the happy girl talk chatter afterwards, with Sylvie and Mona content to sun themselves on the record store roof, discussing all the juicy details, which Sylvie describes as “extraordinary.”

While her mother shows absolute contempt for her daughter’s “frivolous” behavior that she finds scandalous, momentarily putting a stop to the whole thing, the romanticism reaches its apex to the music of Jackie Wilson, "To Be Loved" Jackie Wilson YouTube (2:31), embracing on the city streets, filled with the exhilaration of youth in full bloom, with all its endless possibilities.  But reality kicks in when Sylvie realizes she’s pregnant, while at the same time the Countess books a jazz club in Paris for the Quartet, taking Robert to the other side of the globe, asking Sylvie to join them, but she opts out at the last moment, never telling him about the baby.  Growing to a full-blown melodrama, this is conventional storytelling, allowing blacks to finally flourish in a Hollywood era from which they were excluded, lacking the subversiveness of Douglas Sirk, recreating a 50’s Doris Day and Rock Hudson romance, perhaps not as lighthearted, but just as squeaky clean, where we hear that smoky voice of Doris singing Doris Day - Fly Me To The Moon YouTube (2:42), accentuating the thrill of romance.  Friction, however, develops within the band, as Robert isn’t receiving his financial share, with Dickie (Tone Bell) receiving the lion’s share, assuming ownership of the songs written by Robert, which has him fuming.  Dickie, the piano player, is the most aggressive playboy and the Alpha male of the group, eventually living in a lavish penthouse apartment, while the others get by, but aren’t nearly as financially successful.  Robert is more introverted, soft-spoken and shy, capable of amazingly lyrical solos (actually played by Mark Turner), as expressed by Charlie Parker - "My Little Suede Shoes" (C.P. Sextet - 1951 ... YouTube (3:03), while Dickie is an extroverted loudmouth that usually gets his way.  Eva Longoria plays Dickie’s wife and lights up the screen at a New Year’s dance party, performing a risqué Latin style dance routine to quizas, quizas, quizas - lucrecia YouTube (3:22), where her alluring effervescence contrasts with Robert’s increasingly morose mood, growing weary of his second class status.  During his absence, Sylvie marries, as expected, and has a young daughter that Robert only learns about when her father reveals the news from his death bed in the hospital.  Sylvie’s marriage goes pretty much as expected, as she married for money and security instead of love, as her husband is fabulously wealthy, willing to work with clients with questionable moral ethics, as it’s all about the dollars, and typical of men from that era, shows little respect for women’s independence.  A decade or more of social issues can be laughably condensed to a single scene, or even a single shot, exhibiting a kind of movie shorthand.  Sylvie gets a job as a production assistant for a women’s cooking television show, where she and her boss Kate (Ryan Michelle Bathe) are breaking the color barrier, fulfilling the dream of a lifetime, but to her husband it’s just a job, feeling she should acquiesce to his needs, as he’s the one meeting the financial obligations.  That kind of power dominance doesn’t exactly generate heat and romance, pulling away, creating space and distance, eventually cooling to the idea of marriage, actually separating from her husband.  It’s about that time when Robert knocks on her doorstep after a prolonged absence, curious about the daughter he never knew about, deeply hurt, yet rekindling old flames.

Their careers go on reverse trajectories, as the popularity of jazz dies out, with promoters backtracking on former promises, with Robert finding all avenues leading to dead ends, unable to find anyone who will hire him, with no one even interested in looking at new scores he’s written.  Sylvie’s boss decides to get married and change her lifestyle, opting out of any new contract, leaving Sylvie in charge, which is a major promotion, viewed as a popular choice, as she’s respected and well-liked on the set, certainly qualified and prepared for the job, yet the scene when she walks into her new spacious office is something we don’t often see in movies, wordlessly sitting in her new chair, having a desk with a wall of windows overlooking the city, where prestige is associated with a certain opulence, a major achievement in her life.  One of Robert’s old neighborhood friends from Detroit works at Motown, running into him purely by accident, Tank (Ron Funches), promising work in the Motor City should the need ever arise, with Robert turning to him in desperation, having no other recourse, but it’s all a ruse, as all he does is run errands, having no influence over who’s hired, with Robert quickly finding himself drowning in an economic sinkhole.  However, viewers get a musical reminder of the Motown hit parade with Martha and the Vandellas, 1963 HITS ARCHIVE: Come And Get These Memories ... YouTube (2:25) and Smoky Robinson and the Miracles, Determination YouTube (2:20).  Like many old movies, the storyline written by the director (a former musician) is founded on contrivances and full of shortcomings (much like the title), with Sylvie refusing to tell Robert that she was pregnant, and then Robert never tells Sylvie what actually happened in Detroit, as neither one wanted to interfere or detract from the other’s happiness, thinking silence was the best policy, but over time, secrets come out and people learn the truth, often flabbergasted by what they hear, spending many of the best years of their lives under a cloud of delusion, losing out on missed opportunities.  To be able to bridge that gap is another illusion, one fabricated in Hollywood, which generated a century of happy endings, so in that sense this may be an overly conventional movie, but appealing nonetheless.  The performances here are stronger than the two leads in Barry Jenkins’ If Beale Street Could Talk (2018), set just a decade later, both set in Harlem, but the Baldwin written social realism is much darker and more explicit than anything seen here.  There are a few exceptional standouts, not the least of which are the two romantic leads, continually generating onscreen chemistry, but Aja Naomi King deserves special consideration, though she’s woefully underwritten, as does Wendi McLendon-Covey as the Julia Childs stand-in Lucy Wolper, who tells dirty jokes once the camera stops rolling and is a constant delight in her exaggerated faux-French manner.  The vintage production design is excellent, where it’s easy to simply immerse oneself into this film, never delving too deeply or becoming overly complex, but characters do get lost along the way, like Mona, Sylvie’s producer boss Kate or Lucy Wolper, and then there’s Connie, (Raquel Horsford, who may not have a word of dialogue), a coquettish blond and flirty girl who shows up whenever Sylvie needs a romantic rival, all introduced with storylines that never go anywhere, ultimately limiting what are wonderful performances, deserving of a better fate.  But it’s Tessa Thompson that shines, going through a decade’s worth of wardrobe and hairstyle changes, including several vintage Chanel gowns, developing into a true romantic star that can carry a picture, deserving of all the accolades.