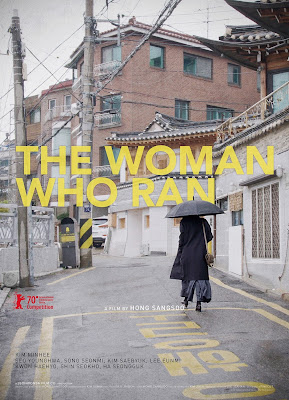 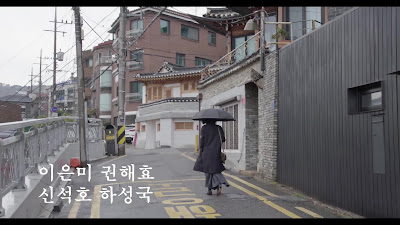 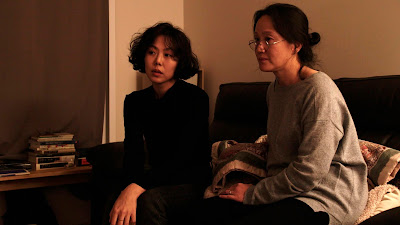 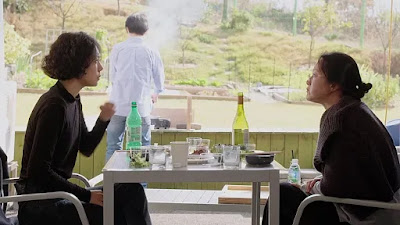 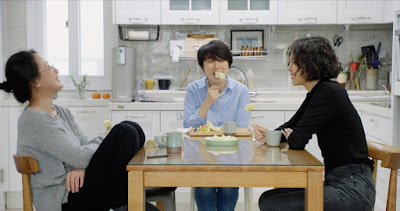 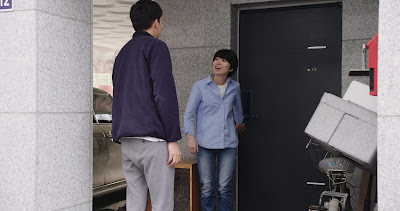 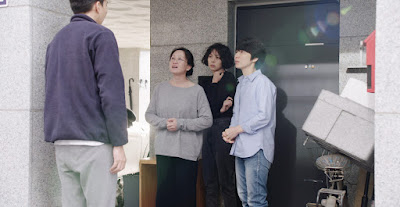 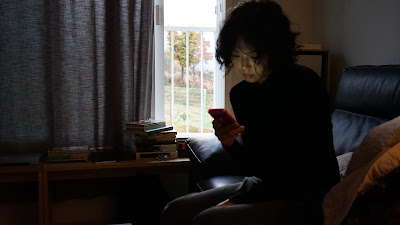 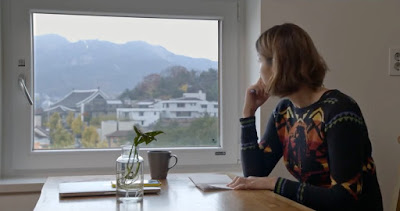 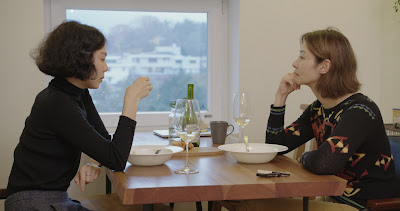 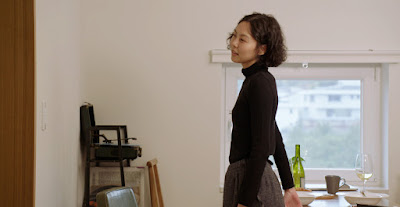 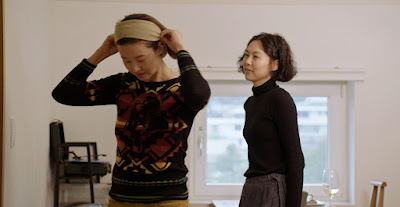 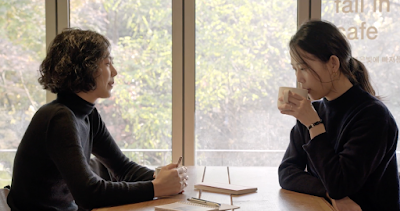 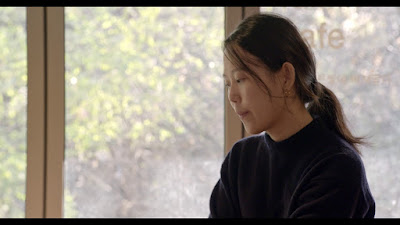 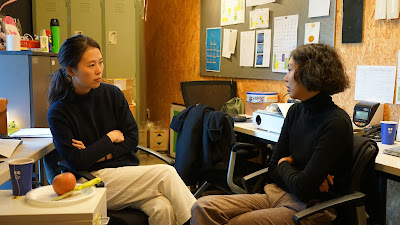 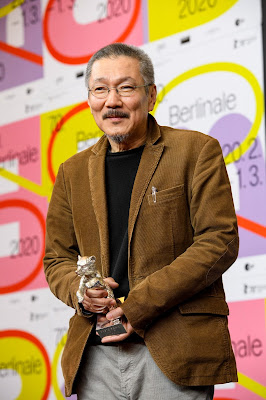 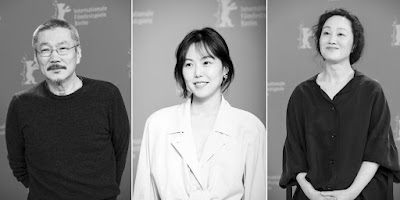 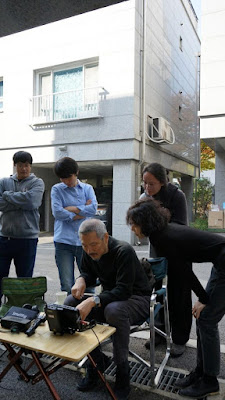 Writing, directing, editing, and producing his own films, Hong seems to be churning out low-budget indie films at will, often several times per year, never really changing or even altering his style, having a talent for making small art films designed entirely around table conversations that are viewed internationally, mostly at film festivals, where he has an established reputation for making quality films, working well with the actors and actresses within his home grown theater group.  Described as “The Korean Woody Allen” by Thierry Frémaux, the director of the Cannes Film Festival, while also evoking memories of Éric Rohmer, particularly in the spare style of storytelling, though Hong is far more confrontational, especially in confronting male delusions, churning out movies since the mid 90’s, where this is his seventh film with actress Kim Min-hee (his romantic partner) that began with 2016 Top Ten List #8 Right Now, Wrong Then (Ji-geum-eun-mat-go-geu-ddae-neun-teul-li-da).  Winner of a Silver Bear for Best Director at the Berlin Film Festival earlier this year, with some going so far as to describe his style as reminiscent of Anton Chekhov, especially the way ordinary everyday realities become reflections of modern day life, it should also be pointed out that at least two other films that screened in competition at that same Berlin Festival make a much better case for Best Director, namely Eliza Hittman’s Never Rarely Sometimes Always and Christian Petzold’s Undine (2020), both of which stand out for their more dazzling directorial style, so the choice remains a headscratcher.  Jeremy Irons was the Jury President, which also included renowned American playwright Kenneth Lonergan on the Jury, so you never know what goes on behind closed doors, but certainly the entire process of evaluating art in competition against one another is a perplexing dynamic worthy of its own discussion, yet it’s hard to believe even among Hong’s own works that this is among his better directed films, as it lacks the complexity of his best work.  Unusual for accentuating an all-female point of view, yet it never rises to the occasion or feels that intensely dramatic, largely defined by trivialities, continually skirting around relationship issues, yet subtlety is a key to understanding Hong’s works, and perhaps the Jury was mesmerized by Hong’s distinctly unfamiliar style, as there’s no one else anywhere in the world making films like his.  Essentially the film follows Kim Min-hee (in short curled hair) as Gam-hee as she visits three different women in the outskirts of Seoul, two in their own homes, while accidentally running into a third at a local independent cinema where she works.  A florist married for five years, presuming she is happy, though subject to reevaluation, as this is the first time she’s been away from her husband, taking advantage of his absence on a business trip, allowing her some free time to visit old friends.  One thing that’s clear is just how much one repeats to each visitor, like a memorized script, all meant to convey honest revelations, yet if you’re saying the exact same thing in each appearance, just how spontaneous or authentic is the conveyed message?  One thing these discussions reveal is how public utterances bear little resemblance to a more personal reality, where it’s surprising just how little information is actually conveyed, where small talk is like a coded language meant to protect one from revealing too much about themselves.  Mostly remaining in a static position, Kim Su-min’s camera occasionally zooms in, allowing a closer inspection of the speaker’s true intent.

Gam-hee’s first two visits are completely banal, exchanging genial pleasantries in the form of girl talk, often complimenting the other, where these visits are notable for the much more intriguing rude interruptions where men make their presence, but awkwardly, altering the female dynamic, mostly revealing just how inconsequential men can be in women’s lives.  Gam-hee’s initial visit is with Young-soon (Seo Young-hwa), seen doing outdoor gardening before she arrives, feeling like they’re out in the countryside, with Gam-hee bringing a package of alcohol and some quality meat for the occasion, which is grilled outdoors for dinner later on by Young-soon’s roommate, Young-ji (Lee Eun-mi), who arrives much later, peeling apple slices for desert, with Gam-hee sleeping overnight.  Initially the two sit on a couch and drink, just chatting away, catching up on their lives, where there’s a spartan cleanness to the look of the home, but it’s living in a tiny box, feeling suffocatingly restrictive, purchased from money received in her divorce, where her ex-husband is a prominent author.  Both are in different stages in their lives, Gam-hee still happily in love, while Young-soon values her privacy, happy to be out of a relationship, wanting little or nothing to do with her ex-husband.  Their dinner soirée is interrupted by a neighbor (seen only from the back) complaining about their habit of feeding stray cats, kindly requesting that they put a stop to that practice as his wife is petrified of cats.  One by one they all arrive at the front door, adding their two cents worth, but both women support the practice of feeding stray animals, identifying with them as if they were their children.  The poor gent is outnumbered, as his argument that people are more important than animals sways no one, with a cat arriving on the scene, as if on cue, looking completely content, apparently having the last word.  Using a mountain and a distorted melody as a transitional theme (apparently recorded on the director’s cellphone), Gam-hee’s next visit is with Su-young (Song Seon-mi), feeling more like living in the center of town, another tiny box, though this one is highlighted by a view of a mountain perfectly centered out the window.  Su-young proudly announces she received a $100,000 discount when purchasing the home, a deal given only to creative artists, reminding her friend that she still produces dance events while also conducting Pilates classes as well.  Gam-hee brings her a designer overcoat, claiming it’s too large for her, but would look better on Su-young anyway.  Living close to everything, Su-young mentions a bar she likes, as it attracts artists of all kinds, including a married architect she likes who happens to live upstairs.  Their visit is interrupted by a fanatical man angered because Su-young has been ignoring him after a one-night stand, making a scene on the doorstep, getting all worked up because she won’t let him in and refuses to answer his phone calls, claiming he’s being humiliated.  She clearly has no interest, calling him a stalker, and asks the guy to leave, all viewed by Gam-hee on the surveillance camera video seen inside Su-young’s apartment.  Welcome to modern day relationships, filled with rancor and drama, where Su-young regrets ever being nice to the guy, claiming it was all a drunken mistake.  A common perception in our memory of youth is that it is filled with mistakes and deep regrets.

By far the most interesting, and most autobiographically telling, is the final visit to Woo-jin (Kim sae-byuk, something of a revelation), who is married to a popular author that Gam-hee used to date, apologizing profusely for any tensions that might have caused, surprised that they actually ran into each other, as they’re not even friends, where much of the conversation revolves around her husband, the unseen artist, Jung Seong-gu (Kwon Hae-hyo), who is giving a book signing and Q & A in the basement of the same building.  It’s a clever way to introduce the filmmaker himself into the discussion, allowing women to speak freely about him when he’s not around, creating an imaginary drama of what they might say.  Much of it is filled with empty spaces, askewed glances out the window, hesitating pauses, and just a general uneasiness, where approaching the subject of a man they both know intimately is embarrassing at first, but Hong mixes in calming footage of the film she is there to see, wordless shots of a shoreline, capturing the peaceful stillness of the sea, eternally in its element in the natural world, establishing its own rhythm.  When the film is over (only two customers), they continue the visit in the privacy of Woo-jin’s office, once again cutting apple slices to share, with Woo-jin mistakenly thinking she was there to see her husband.  While it’s a strange coincidence, to be sure, Woo-jin reveals her thoughts that it’s just not healthy for her husband to be so popular, making too many public appearances, publishing too many books, where he’s constantly seen on television shows where he talks incessantly.  When Gam-hee was dating him, he was less talkative, more serious, still striving to become a respected artist.  From a wife’s perspective, it’s all too much talk, as she’s heard it all before, but it becomes constantly repetitive, perhaps a device he uses to constanly shine attention on himself, striving for and needing the public acclaim, somehow fulfilling a deep-seeded inner need to be loved, actually needing more than one person can give.  She questions how someone can keep absurdly saying the same things over and over again, wondering how any of it can be truthful or sincere, as it feels more like a script he’s prepared for each show, claiming it’s hard to take and that he’ll probably regret it later.  Nonetheless, people envy the lives of successful people seen on TV, as if their lives are far richer and more fulfilled.  While this feels like lacerating criticism of the overpublicized writer/director of the film, Gam-hee, of course, is guilty of the exact same thing, repeating what little she has to say almost verbatim in her repeated visits, where one wonders just how sincere she is in her remarks.  This demonstrates how easily we accept complacency, not really wanting to be challenged, where the things we say are designed NOT to provoke a reaction, remaining safely calibrated and conventional, politely spoken, yet all the personal meaning has been stripped out of the final content.  In this way we generalize our lives, saving the specificity for ourselves or our partners, sharing a less revealing, worn-down version for others.  This compartmentalizing of our public lives is a shorthand for how to get along socially, being polite in each occasion, revealing just enough, but not too much, as we don’t want others asking inquiring questions or taking too much of an interest, preferring to remain discreetly anonymous, where we can lead our own private lives.  This idea of revealing what we actually think or feel is viewed as too exhausting, taking too much out of us, making our lives overly difficult.  So we learn to be less openly truthful to spare ourselves, using a common language of politeness and social grace.  The source of the title remains ambiguous, as there is some talk of a neighborhood mother abandoning her family in the opening segment, yet it also may come from a scene near then end when Gam-hee accidentally runs into Jung outside having a smoke, where she can’t get out of there fast enough when she quickly realizes all he’s thinking about is himself.