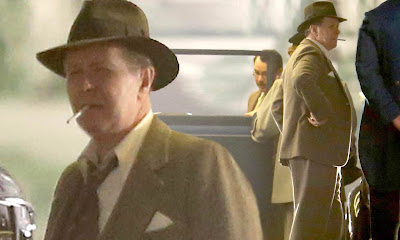 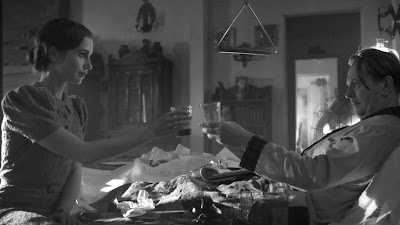 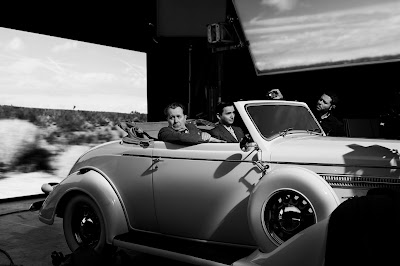 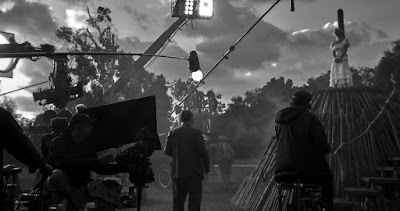 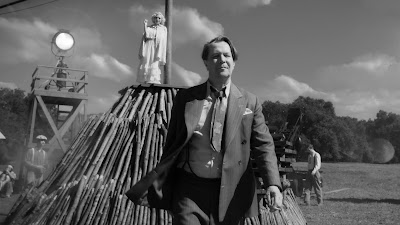 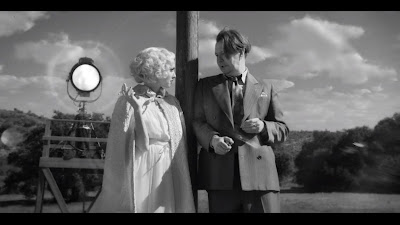 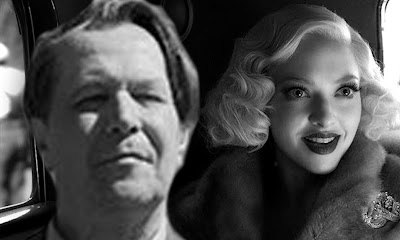 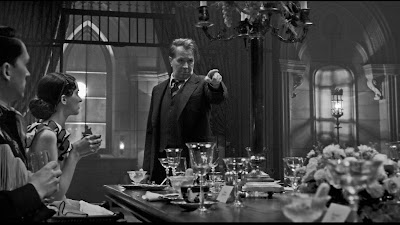 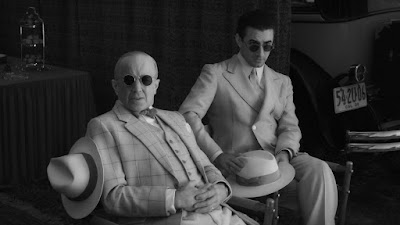 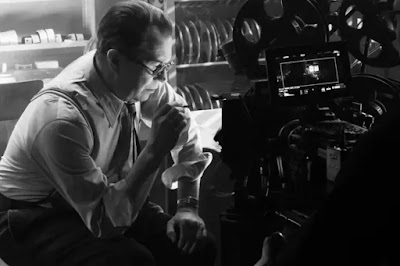 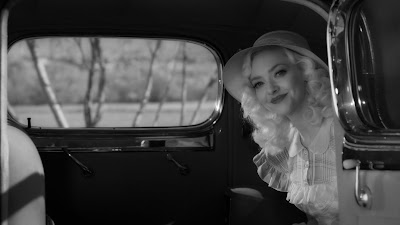 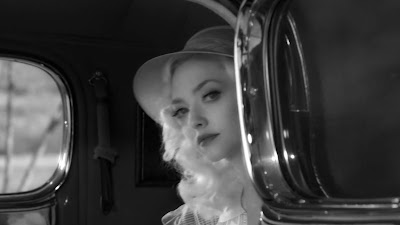 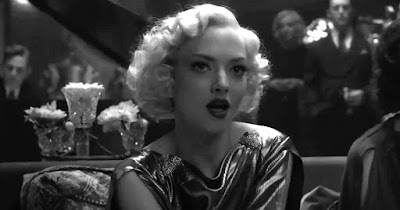 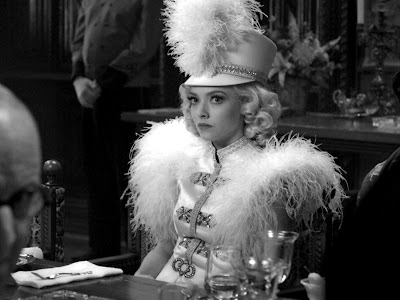 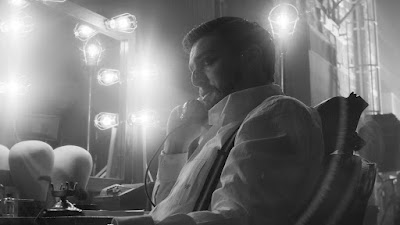 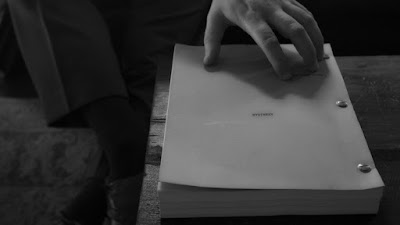 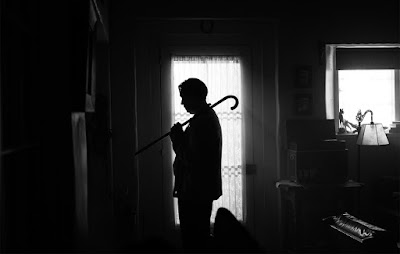 Among the most cynically cold films in the Fincher repertoire, making this dead on arrival, despite the interest in reviving unchartered territory, as there is literally no one in the entire picture worth caring about, becoming a glamorized caricature of what might have happened behind the scenes when movie moguls were changing the face of the industry, creating highly appealing spectacles of entertainment that eventually became part of the mainstream culture.  Despite the Hollywood implications, this is a wretchedly sad story about legendary screenwriter Herman J. Mankiewicz (Gary Oldman), older brother of Joseph L. Mankiewicz who wrote and directed the scathing account of Hollywood backstabbing in ALL ABOUT EVE (1950), revealing how alcoholism consumes a person and his entire career before eventually claiming his life, left with nothing but feeble notions, hallucinations, and delirious tremors that leave you a shattered figure of your former self.  While this hints at the truth behind the writing of CITIZEN KANE (1941), that becomes a mere afterthought in this film, as the man who would be king is king for a day, winning an Academy Award for screenwriting (shared with Orson Welles) before the industry turns its wicked wrath upon him and spits him out as yesterday’s news.  Among the more pitiful pictures in recent memory, a portrait of a sad and forlorn figure who is even sadder than the behemoth giant portrayed in the movie, the larger-than-life portrayal of Charles Foster Kane as William Randolph Hearst, influential newspaper publisher and media mogul.  Written by the director’s father Jack Fincher, a journalist who died in 2003,  (Mank (2020) - Transcript - Scraps from the loft), showing scant affection for Welles, as if still holding a grudge, becoming a poison pen letter to a corrupt Hollywood of the 30’s, a cesspool run by over-privileged business tycoons who cared only about lining their own pockets, where this film is seen as a feeble attempt to fight back against the powers that be, yet indulges in the miserably self-absorbed, continually glorifying the artifice, wallowing in its own pathetic cloud of inebriation, blind to the horrors of the Depression, instead providing a hollow yet glamorized view of the millionaire movie moguls that controlled the industry.  With the hyperliterate Mankiewicz a towering figure walking among them, engaging in witty repartee, known for his biting sarcasm and free-spirited love of drink and gab, even Hearst enjoyed his dazzling conversation, so he fits right into an industry overflowing with magisterial self-indulgence and wealth, pampered by all the pleasures money can bring.  When we see him holed up in the middle of the Mojave desert with a nurse and secretary recovering from injuries suffered in an automobile accident (his leg broken in three places), including provisions (alcohol laced with Seconal) fit for an army regiment, he’s essentially given 60 days to produce a screenplay for the first film of new Hollywood wunderkind Orson Welles, all under the supervision of John Houseman (Sam Troughton), with Mankiewicz dictating to his secretary Rita Alexander (Lily Collins) who then types up the manuscript.  While it’s slow going at first, as he’s not easy to warm up to, continually plying himself with alcohol, subject to blackouts, he quickly makes progress on what is easily the greatest thing he’s ever written, a sprawling epic work that examines the life of an American newspaper tycoon who becomes one of the richest and most influential men in America, yet behind the scenes is a different story, a punishing portrait of a wrenchingly lonely and isolated man, never seemingly satisfied with all his wealth and riches, told with flashbacks, becoming a collection of fragments compressed by time and space, and from multiple points of view, where the daring visual design is all Welles. According to Mankiewicz, “You cannot capture a man’s entire life in two hours, you can only hope to leave the impression of one.”

The script is subject to historical Hollywood controversy where there are questions of authorship, with film critic Pauline Kael writing a legendary New Yorker essay in 1971 entitled Raising Kane where she attributes Mankiewicz as the sole and exclusive author, suggesting Welles’ grandiose claim of co-authorship is a power play on his part, actively plotting to deprive him of any screen credit, contributing little, if any, to the actual writing.  Rebuffing Kael’s argument is longtime Welles friend and admirer Peter Bogdanovich, who published his own essay entitled The Kane Mutiny in a 1972 article for Esquire that point-by-point disputes Kael’s argument, suggesting her refusal to consult Welles lacked all principles of scholarship, resulting in egregious errors with blatant damage to his reputation.  With various other film critics chiming in, like Andrew Sarris, Jonathan Rosenbaum, and Joseph McBride, it appears relatively clear that Mankiewicz wrote the original draft by himself, yet signed a contract giving up any claim to credit, but then changed his mind, subject to various rewrites by Welles, who had complete freedom to make whatever he wanted, suggesting in the end it was a collaborative process, with both named as co-writers of the film.  For the most part, Fincher chose the version that gave the most credit to Mankiewicz and the least credit to Welles, who is barely onscreen and never seen writing a single word of the script.  After receiving a shared Oscar, Mankiewicz quipped, “I am very happy to accept this award in Mr. Welles’s absence because the script was written in Mr. Welles’s absence.”  Fincher’s film doesn’t go into any of those details, ignoring any backstory about how he was selected, fully absorbed in the writing of the original script, suggesting Mankiewicz was extremely proud of his work, but it got bogged down in lawsuits, which eventually affected not only the script but the commercial aspirations of the film, as it was effectively sabotaged at the box office by the movie moguls who at the time controlled what was shown in theaters, opening the door for Hollywood to undercut Welles’s ambition within the industry, targeted by the right-leaning Hearst organization, with the moguls viewing him with leftist contempt, destroying his ending to THE MAGNIFICENT ANDERSONS (1942) and reshooting a new ending, which officially ended any relationship Welles may have had with Hollywood, as he felt betrayed in every respect.  The Mankiewicz career trajectory was quite different, establishing his reputation in the 20’s and 30’s as a theater critic and Berlin war correspondent before becoming a script doctor in Hollywood, called upon to add spicy dialogue, offering splashes of humor, even helping shepherd in the new wave of German émigré’s fleeing the Nazi’s in Europe, including Fritz Lang in FURY (1936), helping him make the American transition to Hollywood by speaking fluent German.  His career ended by basically putting Welles on the map, but in doing so soured all his Hollywood connections, biting the hand that fed him, burning all his bridges in the industry, exemplified in a single bravura scene at the Hurst mansion, a costume dinner party at San Simeon where he shows up uninvited and completely plastered, a court jester standing up to power, going on a lengthy drunken outburst that is cringeworthy and will forever alienate him from anyone left in the business, but he does have the last word, unceremoniously vomiting at this ultra-lavish dinner party where he is eventually shown the door by the host.  If anything, Mankiewicz seems to have thrown his entire career away in continual episodes of bad taste, going on drinking binges where he performs the part of the buffoon, but in the end no one is laughing.

A pale comparison to Welles’ last film The Other Side of the Wind (2018), which is a behind-the-scenes look at some of the characters within the Welles theatrical troupe, exaggerated in all their pomp and glory, consumed by alcohol to the point of dysfunction, but Welles has so much more to offer than Fincher, whose film is strangulating in its own pretentiousness, creating an empty and meaningless experience.  Fincher tries to paint a portrait of Mank as a visionary, one that is hard to believe, as he was a man that seemingly admired both Hearst and Welles, and was just as much a maverick as Welles, with both rubbing elbows with the movie moguls, including Hearst (Charles Dance) along with his partner and muse, actress Marion Davies (Amanda Seyfried), where the wealth and richesse of Hollywood was their social class during the Depression, surrounding themselves in pretense and self-indulgence.  In fact KANE and MANK cohabit many of the same spaces, but no clips are shown in the film, instead Fincher searches for the origins of the inventive screenplay by replaying various episodes in the life of Mankiewicz, a Hollywood insider with access to fame and fortune, but a gambling impulse left him perpetually in debt, who likely sees things quite differently than the millionaire class of moguls.  When the banks closed during the Depression, Louis B. Mayer (Arliss Howard) tearfully asks his employees to take a temporary 50 percent pay cut, promising to make his workers whole when the banks reopen, but of course, no repayment ever occurred.  Mankiewicz refused to join the Screen Writers Guild, believing unions were for suckers, but in this case the workers were certainly duped out of their salaries.  Like KANE, much of this film is told in flashbacks, making multiple diversions, becoming bogged down in the trappings of the movie industry, shot digitally in black and white by Erik Messerschmidt, including multiple scenes in near darkness, where Mankiewicz breaks from the political crassness when the industry becomes a walking advertisement for political shenanigans, becoming a voice of liberal dissent in a room full of conservative Republicans, drawing a parallel between the glorious ideals of Upton Sinclair, a muckraking novelist and an outspoken socialist who the industry slays into submission through discrediting negative advertisements that play in theaters across the state when he ran for Governor of California promising to end poverty, turning him into the bogeyman, but his valiant idealism isn’t so far removed from Hearst himself as a young novice trying to have an influence in reshaping the world, or for that matter the brash new visionary upstart in Orson Welles.  Pity that Hearst had to use all his power to destroy young ambition in its tracks, where a shattered idealism becomes intertwined with his own unfulfilled ambitions, leaving a giant void in the heart of the empire, where his castle-like estate is a collection of museum-like art pieces collected from around the globe, but does any of it hold any real meaning?  What this film lacks is what pervades throughout KANE, a personal perspective, an inner drive, something to cut through the emotional coldness and deep cynicism of Mankiewicz, whose openly hostile remarks are contentiously sarcastic and absurdly flippant, but instead Oldman delivers a performance that never convinces, continually uttering glorified phrases that sound nothing like how people really talk, lacking warmth and any real personal connection to anyone, at one point exclaiming “every moment of my life is treacherous.”  In stark contrast, the ingenious script for KANE is legendary, originating in such a desolate place in the middle of nowhere, creating something akin to a revolutionary work.  For Mankiewicz, the confessional tone of the screenplay he wrote was his ultimate expiation.