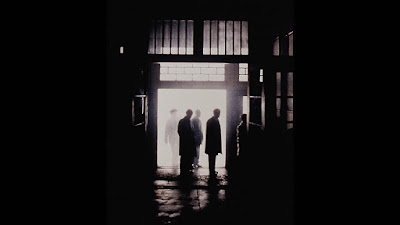 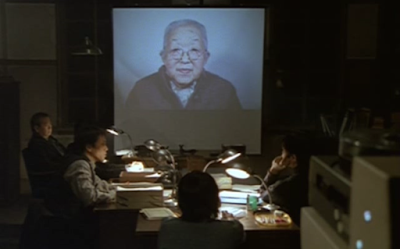 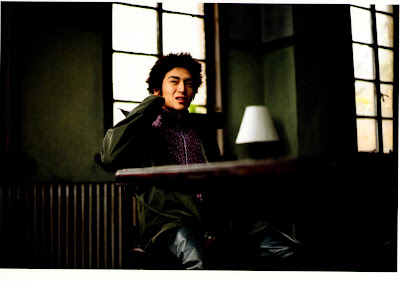 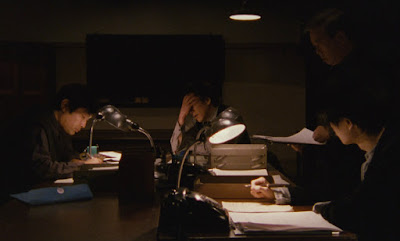 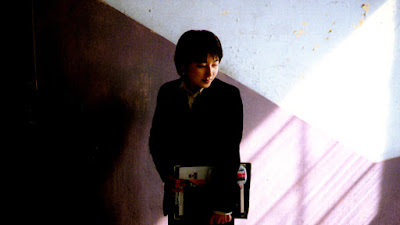 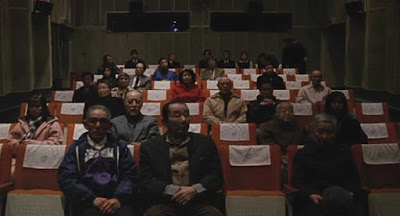 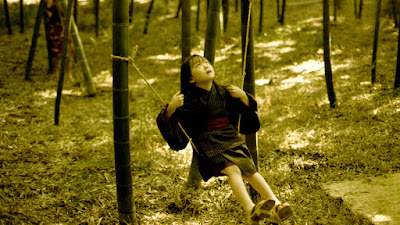 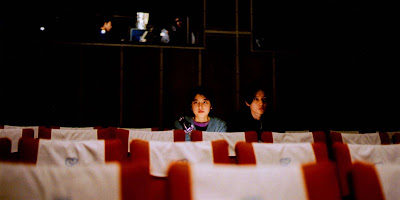 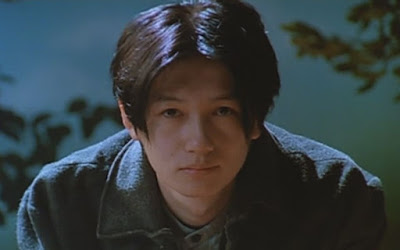 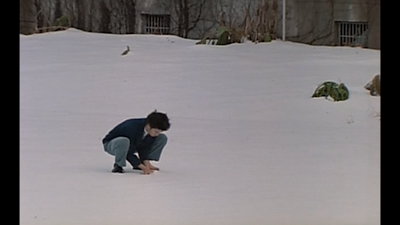 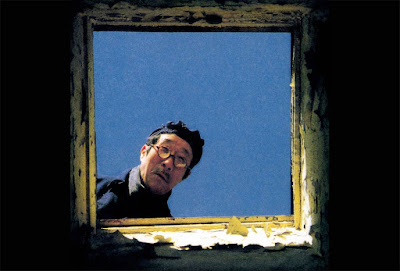 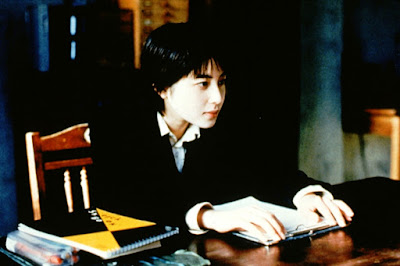 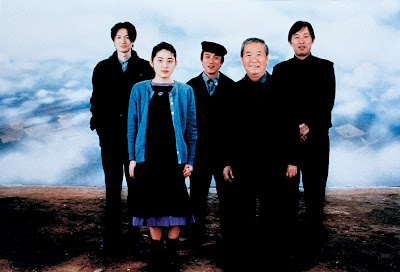 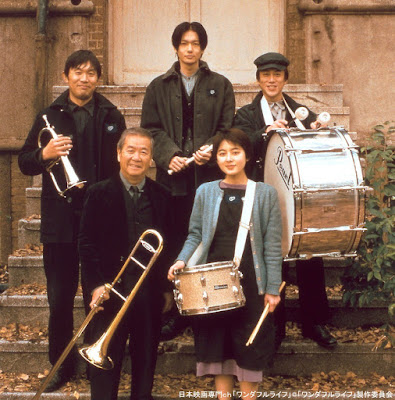 Perhaps there is no one better to make this film than Hirokazu Kore-eda, a distinctly Japanese filmmaker with a history making television documentaries, where this somber and delicate fantasy version of a brief “afterlife” is filmed with the unique precision of a documentary film, where details are essential, as so much information is gleaned from face-to-face interviews (constructed from more than 500 non-scripted interviews with real people) shot on 16mm film, giving the appearance of reality, yet the humane premise of the film feels so whimsical, devising a place of limbo, a week-long waystation between the living and the dead, with a new batch of weekly arrivals interviewed by counselors who politely inform them of their recent death before instructing them to pick one cherished memory from their life, having three days to choose, then recounted in extreme detail before being staged and recreated through film, finalized on 35mm, and once viewed on their final day, given considerable fanfare from a makeshift band that marches them single file into the screening room, each participant will disappear into eternity through that single memory.  Even the unpretentiously drab institutional setting itself defies imagination, as it resembles a broken-down school with classrooms, auditoriums, and long hallways, providing dormitory style accommodations for the small working crew, while the large outside grounds are overrun by unkempt gardens and expanding foliage.  This is such a contrast to other mainstream versions of a fantasy afterlife, citing the allegorical aspect of Lubitsch’s HEAVEN CAN WAIT (1943) as an influence, yet the most glorious may be Powell and Pressberger’s A MATTER OF LIFE AND DEATH (1946), made the same year as Capra’s IT’S A WONDERFUL LIFE (1946), corresponding to the Japanese title of Wonderful Life, both incorporating surreal, dreamlike effects to express a heavenly glory.  Not so here, with no heaven or hell, no god or religion, as Kore-eda provides a more humble working man’s version, exposing an ever after layered in bureaucracy, yet is all the more humanly relatable because of his intentional choice to eschew special effects or make believe, where the film equates memory and meaning with the essential nature of making cinema itself, including the artifice of props, costumes, set decorations, all of which offer a unique perspective in shaping the reality of that memory.  It’s an extraordinarily original concept, capturing the essence of what constitutes a documentary film in the process, as the writer/director/editor searches for meaning and even the transcendent behind these every day, ordinary lives, much like Ozu in TOKYO STORY (1953) or Kurosawa in IKIRU (1952), where the audacity of the idea itself is monumental, yet the conception is so minimalist and austere.

Kore-eda’s interest lies in the role memory plays in shaping one’s life, which became intensely personal for him since his grandfather died of Alzheimer’s when he was a child, where some part of the film was his way of restoring the lost memories of his grandfather, where cinematic images may be the closest artistic expression of those memories, a concept explored earlier by Wim Wenders in Until the End of the World (Bis ans Ende der Welt) (1991), where technology allows people to view their own subconscious thoughts in cinematic form, and also Sokorov’s ORIENTAL ELEGY (1996), offering more poetic imagery of souls suspended in limbo between life and death in their search for enlightenment.  While Buddhist themes of nirvana and rebirth may play out here as well, it remains measured and understated throughout, offering a peaceful and contemplative retreat in search of memories that hold meaning with each of these individuals.  Accordingly, the camera finds empty corridors or an empty chair, as if waiting to be filled.  The small crew consists of a director Nakamura (Kei Tani), three male counselors, and a female assistant (as well as a support staff to help with the filming), seen as a group happily sharing freshly brewed Earl Grey tea, all patiently assisting the recently dead in selecting special memories, talking to them about their lives, asking questions, listening with an acute ear, but what we discover is as much about the counselors as the participants, as they are themselves dead, never able to decide their own life choices, but all seem to be in search of something that’s missing from their lives, something that remains elusive.  Centered on two of the counselors, the film mainly follows Takashi Mochizuki (Iura Arata) and his assistant Shiori Satonaka (Erika Oda), with Mochizuki oblivious to the obvious crush Shiori has on him.  The counselors double as production assistants and location scouts, with Shiori spending an afternoon searching for locations, snapping snapshots of what she sees, even managing to mingle on the busy streets of Tokyo, where she apparently remains unseen, like a ghostly presence, with no explanation of how she managed to travel there.  Upon return, she is chastised for the photos, which are unusable, as they reflect her own interests instead of material for the clients.  This picture of emotional immaturity reflects the age of her death, as she died as a teenager and destined never to grow up, remaining rebellious and rambunctious, forever stuck on her first crush, subject to emotional mood swings, while Mochizuki is an intent listener, demonstrating empathy and concern, though he’s challenged by one particular 71-year old man, Ichiro (Naito Taketoshi), a retired steel-company executive who can’t decide, thinking his life has been too average, with nothing exceptional standing out, where the film deftly looks at the tragedy of an unfilled life.  To aid him on his selection, he is given videotapes of his life, one corresponding to each year, curiously warned “these won’t correspond exactly to what you remember, so just use them as a guide” (absurdly suggesting a gigantic catalogue system), spending the day viewing himself at earlier stages in his life, growing even more unsettled by what he sees, yet needing this sense of overall detachment to look back at his life and retroactively discover happiness in a situation that wasn’t experienced as happiness when he was living.

Curiously, through the various clients, different historical periods of Japan are examined, with each offering a personalized perspective, which is an imaginative way to review history and the impact it has, examining Japanese history from the 1923 Great Kantō earthquake and the ensuing massacre of ethnic Koreans, the historic mistreatment of women leading up to the devastation of the war and the immediate aftermath, right up until the post-war economic recovery, where people’s memories are not always accurate, often haunting us like ghosts, easily embellished by white lies we start to believe, which are exposed under scrutiny, yet somehow feel more human, more real, than the actual reality, but no judgments are ever made, nor does the director ever concern himself with the actual causes of death.  Instead, the film is about an unvarnished pursuit of truth, continually striving for authenticity and realism, where what they’re really trying to do is be honest with themselves, searching for one moment in their life that resonated and brought them happiness.  While the film meticulously follows the weekly procedures, each shot exemplifies the spirit of an unending search, as viewers never question the seemingly arbitrary rules, following with varying degrees of interest as each of the clients communicates personalized stories that matter to them, at times belabored by the banality of the description and the sheer ordinariness of their lives.  Very little actually happens in this film, as it’s more about spiritual contemplation, questioning how it might all come together, where individual pieces get lost along the way, as not everyone plays a prominent role, but the interaction between Shiori and Mochizuki is the closest thing to human drama, remaining under the surface, never discussed, yet both have a profound effect on the other, as they do on the audience, as they’re very personable and so easy to identify with, particularly Shiori, stuck in arrested development, like a chrysalis on the verge of becoming a butterfly.  This state of transition becomes a metaphor for our own lives, but also the art of cinema, which goes through its own phases of development.  Partly what makes this film so interesting is the thought the director put into it, never resorting to flashbacks, reduced to utmost simplicity, sharing warmth and respect towards each of the characters, large and small, remaining profoundly affecting in so many different ways, where the overriding philosophy is contained within the imagery.  Refusing to provide all the explanatory answers, Kore-eda often leaves viewers perplexed, as characters must be by this process, feeling a bit overwhelmed, perhaps even intimidated by the finality of it all.  One of the more humorously clever scenes has Nakamura paying a visit to Shiori after overhearing a combative conversation she had with Mochizuki looking up at the skylight, revealing a moon overhead (a light fixture that turns out to be an illusory cut-out prop), suggesting the moon fascinates us because “its shape never changes, yet it looks different depending upon the angle of the light.”  By implication, people never appear the same to everyone, even those closest to you, where happiness and sadness are simply different interpretations of similar experiences.  Much of this film, a mystical mix of fiction and non-fiction, which may as well be a meditation on cinema, can be viewed through a cultural lens, changing meaning depending on the culture that views it.