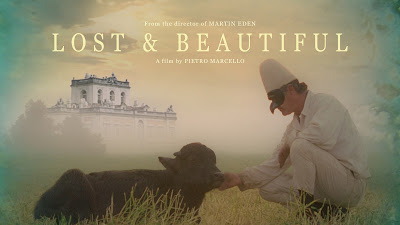 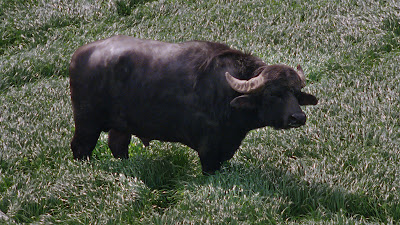 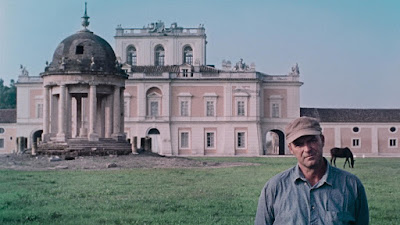 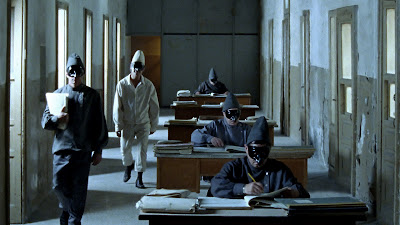 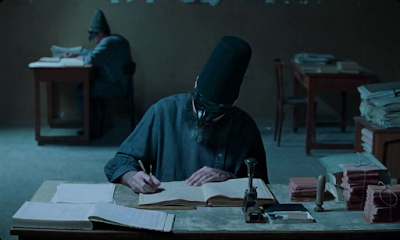 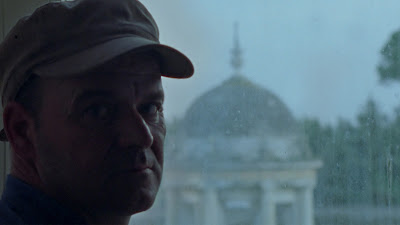 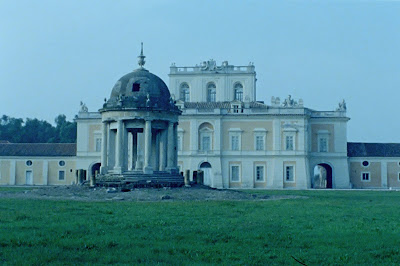 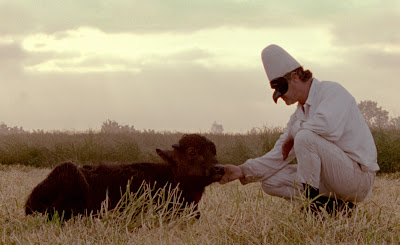 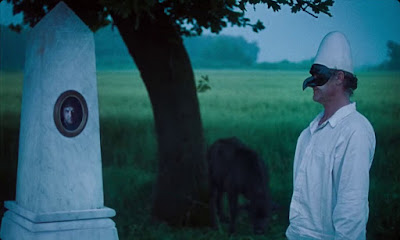 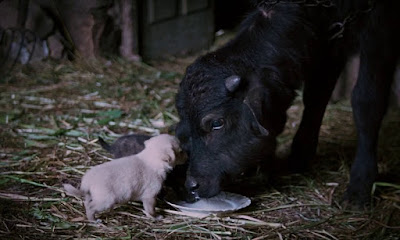 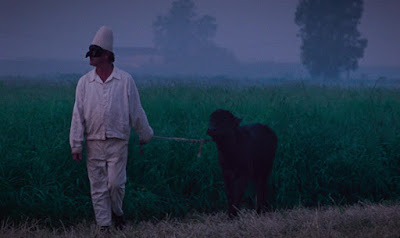 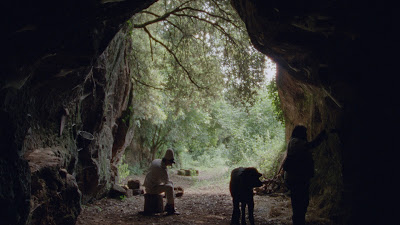 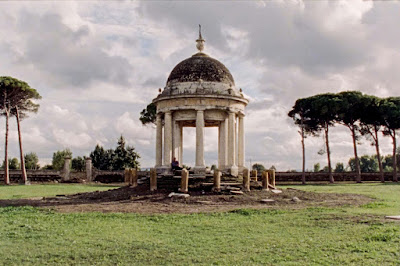 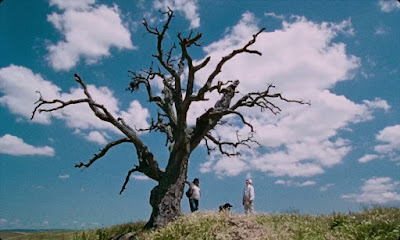 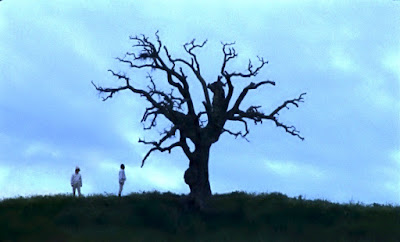 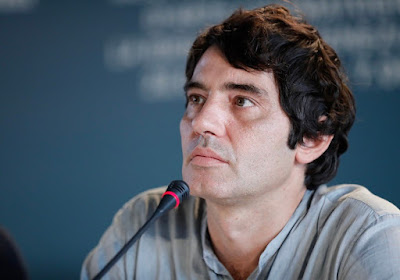 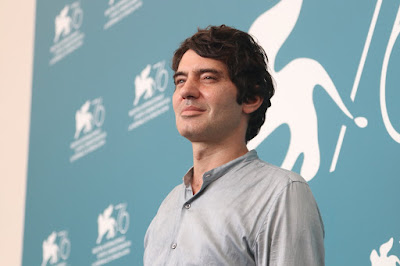 Winner of two awards at the Locarno Film Festival, including a Junior Jury Award and an Ecumenical Jury Prize, this is an overly somber, life cycle, changing seasons film that becomes embellished, resorting to fantasy, reconstructed into a montage essay revolving around the subject of death, where the life of a local shepherd, Tommaso Cestrone, becomes intertwined with a newborn buffalo calf in the Campania farmlands of Southern Italy.  While ostensibly a documentary on the life of Tommaso, something of a local hero when he voluntarily takes it upon himself to inhabit and resuscitate the abandoned royal estate of Carditello, an 18th century palace once used as a royal hunting lodge, belonging to the Neapolitan Bourbon Monarchy, which combined the kingdoms of Sicily with Naples.  Both were overthrown by Giuseppe Garibaldi in 1860, where the castle would fall into disuse after the unification of Italy, when it was left to the local head of the camorra, a crime syndicate, initially using it as a stash house before neglecting the property, which became used as a refuse center, overrun by garbage and junk, gradually stripped of its interior fixtures over time, occupied by both German and American troops during the war, left in a state of degradation and decay, reacquired by the Italian Ministry of Cultural Heritage in 2014.   Yet it was Tommaso who became something of a local legend, standing up to the threats and intimidation from the camorra, where locals (enjoying the protection) take to the streets with placards reading “The Camorra is honest!  The State steals money!” singlehandedly preserving the grounds and dedicating himself to this thankless task of cleanup and restoration.  When Tommaso died inexplicably late in 2013 during the middle of the shoot, Marcello altered his vision, turning this into a metaphysical exercise that combines Italian myth with mortality, creating a replacement character borrowed from the commedia dell’arte from 17th century theater where a masked Pulcinella character (Sergio Vitolo), is raised from the dead in order to communicate with the living, immediately taking Tommaso’s place.  His first order of business is rescuing an unwanted buffalo calf that Tommaso rescued from the side of the road, where strangely and mysteriously, the animal (Sarchiapone) has the power of voice (Elio Germano), becoming an observing prescient figure and part of the narrative thread, literally taking on a life of its own, describing his inner thoughts and feelings, revealing the story of his life, yet only Pulcinella can hear and understand him, viewers as well, giving him an existential presence, turning this into a strange and exotic tale, Excerpt from Bella e Perduta (2015) by Pietro Marcello YouTube (3:44).  Shot on a budget of €470,000, using expired 16mm film stock, while regularly intermixing archival footage, there is a darkened and degraded look to this film, shot by Salvatore Landi and the director himself, given a neorealist look accented by dream language and theater of the absurd, also given compelling 18th and 19th century musical themes from Caterllieri and Donizetto in Antonio Casimir Caterllieri (1772-1807) - Adagio pastorale for ... YouTube (5:32) and Donizetto’s Clarinet Concerto in B-Flat Major: Andante sostenuto  YouTube (4:10), and an early 20th century work from Respighi, Andrea Cappelletti "Concerto all`antica" Respighi (2. Mov ... YouTube (8:49), adding a pastoral grace to what we see.

In the same vein as Bresson’s Au Hasard Balthazar (1966) or Michelangelo Frammartino’s Le Quattro Volte (The Four Times) (2010), though not nearly as transcendentally poetic or sublime, this oddly stylized road movie has a harder edge to it, particularly the opening scene subjectively taking place in a slaughterhouse, and can be difficult to watch, where the Pulcinella character is not nearly as affable or as engaging as the original Tommaso, who is mostly spoken of in the past tense, revered by one and all, viewed in death with compassion as a patron saint, calling him the Angel of Carditello.  Arguably the sequence of the film expresses his passing, announced and narrated by Sarchiapone, showing us Tommaso’s wedding photo before solemnly asking, “How long is a life?  It’s like the sheltered rest of a traveler along the road.”  With a final look straight at the camera, he is given a powerful sendoff, beautifully captured by a haunting song of death sung by the immortal voice of Italian tenor Giuseppe di Stefano, Giuseppe di Stefano. Fenesta ca lucive. (Cottrau) YouTube (2:47), which literally sends chills down your spine in its transfixing effect, mixed with political street protests of the missing or dead girls and women killed by the camorra, followed by serene and bucolic views of a once beautiful countryside under siege from fires, known as Terra dei Fuochi (Land of Fires), where the camorra notoriously burn illegal trash fires, releasing illegally buried toxic industrial waste into the atmosphere, with garbage lining deserted city streets, (The Camorra and the garbage racket in the 'Land of Fires ...), leading back to an empty and abandoned palace, which serves as his tomb, with horses running or grazing peacefully outside on the lawn.  Pulcinella assumes the mission of saving the calf, leading him out of the region that would only slaughter him, having no other use for a male calf.  As they wander the countryside, they come upon a farm owned by a brother and sister, allowing him to rest his calf while offering him a room upstairs, which they completely avoid since the passing of their parents, claiming they will live and die in this same farmhouse.  In a mysterious dream sequence of a herd of buffalos out in the wild, a single bull is separated and paraded in the streets, taunted and teased with by a drunken crowd that takes extraordinary pleasure in humiliating and eventually dominating the animal, calling into question our human relationship with animals, viewed as beasts or secondary creatures that exist only for man’s benefits, having no soul of their own.  As somber organ music plays, Scarlatti - Sonata K. 109 in D minor - Gerard van Reenen YouTube (9:00), this film suggests otherwise, with Sarchiapone’s narration challenging the pompous arrogance of mankind, offering itself as an example of a sentient creature, capable of viewing its own life in context to the world around him, including being subject to routine dehumanizing techniques, which are not lost on this creature.  Accordingly, there are multiple images of herds of buffalo occupying the landscape, living in complete harmony with nature, co-habiting on the planet in peace, where there’s a wonderful scene of buffalos wandering into the sea, all in unison, as the waves simply wash over them to the calming, pastoral music of Lekeu’s Ophélie, V.22, 2e version (Seconde étude symphonique) YouTube (9:31).

The film title comes from a line from Va, pensiero (chorus of Hebrew slaves) in Verdi’s Nabucco, “O my homeland, so beautiful and lost,” Verdi: Nabucco / Act 3 - "Va', pensiero, sull'ali dorate" - YouTube 4:24), which may as well be an anthem for the nation.  However, the film is loosely based on the writings of Guido Piovene, an ardent fascist in his youth who grew to appreciate Marxism, who wrote highly subjective, self-evaluation travel books that examined human nature and the force of traditions while emphasizing the moral predicament of mankind, where common themes exhibited are the absence of personal responsibility in modern man, egotism, passivity, with a growing despair over the submerged transience of all traditional values, public and private, believing a writer is tasked with “the memory of the world,” where his artistic reach concerned the mythical as well.  In his 1970 novel, Le Stelle Fredde (The Cold Stars), which won the Strega Prize, the most prestigious Italian literary award, the novelist Dostoyevsky returns from the afterlife to carry on a series of remarkable conversations.  Perhaps even more ambitious than his other remarkable films, The Mouth of the Wolf (La bocca del lupo) (2009) and 2020 Top Ten List #1 Martin Eden, this lacks the grabbing immediacy and natural beauty of those films while attempting something that is entirely unique.  But it feels jumbled and chaotic, on significantly murkier grounds, never transparently clear or understood, yet all his films are an assessment of 20th century Italy, making a closer inspection of the land here, observing peasants who wish to throw away the chains of servitude, embodied by a farm animal with a visible conscience, as we hear him philosophize about his plight on earth, imagining a world without humans, finally escaping the laws of man, even dreaming of living on a distant star where humans sprout wings and fly out to mythical celestial lands.  According to the director, “Carditello is the symbol of a lost beauty and the struggle of an individual, an orphan who refuses to surrender to a rotten mechanism of destruction and decay.  And at the same time this story, deeply rooted in our country’s history, examines a subject which has never been so universal:  the relationship between man and nature.”  After wandering through a “lost and beautiful” countryside filled with forests and streams, with suggestions that Italy has lost connection with its pastoral roots, showing a blatant exploitation and disrespect for nature, they venture to Tuscia and come upon an irascible soul, Gesuino (Gesuino Pittalis), an oversized giant of a man who apparently lives in a cave while also tending to his sheep.  Gesuino introduces Pulcinella to a Tree of Death and a magical pond that allows him to remove his mask and change back into human form, but when he does, he loses his ability to communicate with Sarchiapone, who is suddenly viewed as nothing special, just another animal, where Gesuino leaves him with a local farmer who eventually ships him off to the slaughterhouse.  Despite the promise of so much more, allowing a glimpse into an idyllic rural world governed by the seasons, where nature and man coexist peacefully, humans being who and what they are, Sarchiapone ultimately must resign himself to his own fate, which is extremely difficult to watch, returning back to the opening scene, making an eloquent plea, “Despite everything, I’m proud of being a buffalo.  In a world that denies we have a soul, being a buffalo is an art.”  Even while offering what amounts to a cow’s lens, having his own unique vantage point, the film never plays out like a fairy tale, more like a tragedy, which seems to suggest we all need to liberate ourselves from the slavery of ignorance.