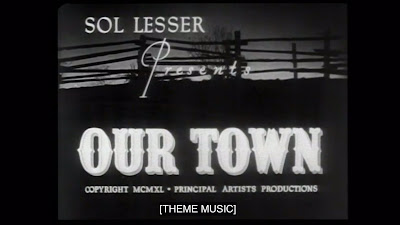 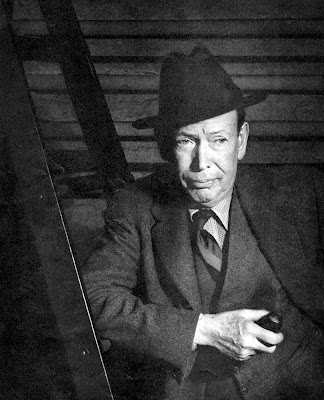 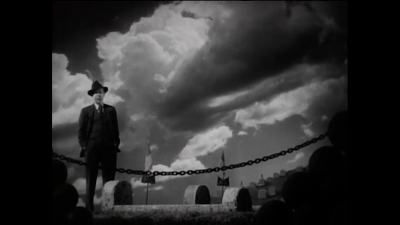 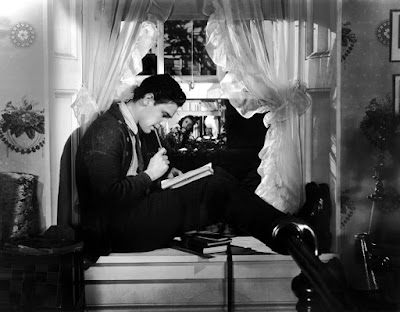 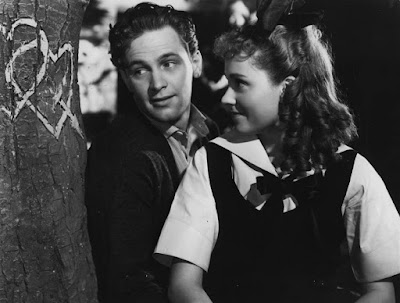 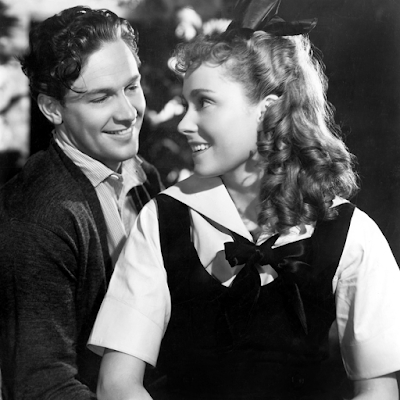 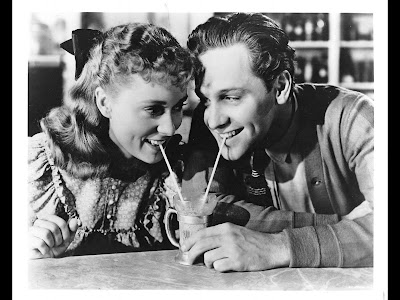 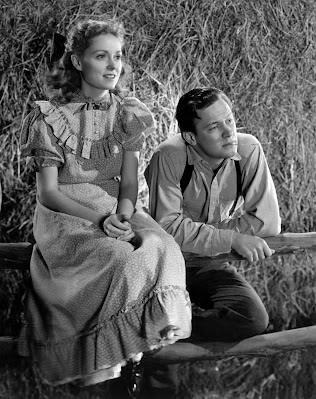 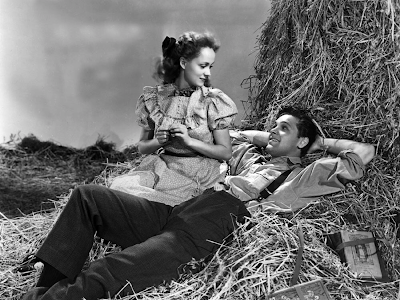 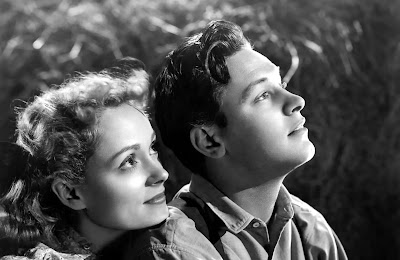 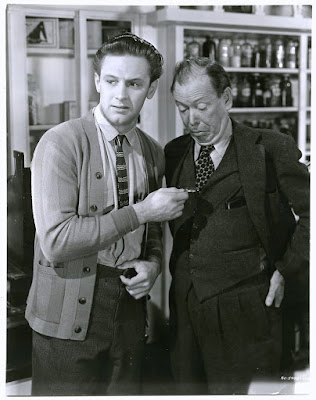 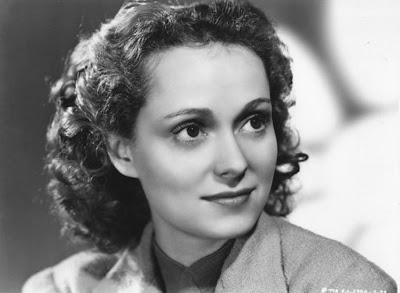 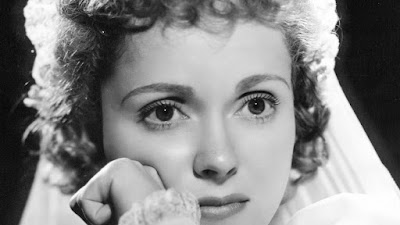 Having fallen into public domain after the original copyright was never renewed, this film was repeatedly shown on television in badly mutilated copies, which remains the case even today, having never been restored, so less than pristine versions are all that’s currently available, which is a shame, as this is an iconic piece of Americana, adapted from Thornton Wilder’s one-of-a-kind, Pulitzer Prize-winning play (seen here, Our Town, 119-page play), often considered “the great American drama,” with fellow playwright Edward Albee heralding it as the best play ever written by an American, including a musical score written by American composer Aaron Copland, another Pulitzer Prize winner, with production design (aka art direction) by William Cameron Menzies.  Reputed to be the most performed play in the United States, performed by high schools and community theater groups across the country, this is a legendary play, where the theatrical version may be how most have been introduced to this film, which bears a similarity to Frank Capra’s IT’S A WONDERFUL LIFE (1946), which used to be shown on television every Christmas Eve for decades, both featuring a surprising surrealistic flourish where a central character has the capacity to revisit their lives from a heavenly perspective, offering renewed inspiration to the living.  Both are remarkable in their own ways, one released prior to WWII, and one released immediately afterwards, with actor Thomas Mitchell appearing in and figuring prominently in both, yet this film is intended to be written as a time capsule of ordinary American life, a quest for bucolic simplicity and a return to American innocence, beautifully preserved in all its modesty and glory, set at the dawn of the 20th century before the arrival of the automobile, succeeding brilliantly, having an influence on Orson Welles’ The Magnificent Ambersons (1942) as well as Capra’s IT’S A WONDERFUL LIFE (1946), not to mention the British duo of Powell and Pressburger’s A MATTER OF LIFE AND DEATH (1946), while Alfred Hitchcock was impressed enough to employ Thornton Wilder to co-write a polar opposite, his macabre portrait of evil lurking just under the surface of small town America in Shadow of a Doubt (1943), yet more than half a century later this still remains among the better depictions of small town life, characterized by the customary habit of no one ever locking their doors.  Directed by Sam Wood, who also directed two Marx Brother’s comedies, A NIGHT AT THE OPERA (1935) and A DAY AT THE RACES (1937), this film sneaks up on you, stringing together a series of what resembles routine and uneventful moments, giving way in the end to a metaphysical exploration of what comes after earthly life.  While the stage version uses no curtain and no scenery, defying the illusions and conventions of stage drama, becoming any town, taking place anywhere, not just New England, complete with archetypal references of Main Street, a town hall, school, churches, grocery store and the drug-store counter, played with a bare bones stage production that Lars von Trier emulated in DOGVILLE (2003), which allows the audience to visualize a world left behind, mirroring what ultimately happens to the main character in the last act.  The film, on the other hand, takes place in a small hamlet surrounded by fertile farmland and rolling hills, a pastoral idyll, filled with nothing more than ordinary moments, seemingly little more than simplicity itself, right down to the smallest detail, then it grabs you by the throat at the end and leaves a spellbinding effect, a real shock to the senses, striking at raw emotional nerves, becoming a glorified tearjerker, plumbing the depths of melodramatic excess and reaching into transcendent spiritual heights, offering a celestial combination of nostalgia and wisdom from beyond the grave.

America is as much an idea as it is a place, where an imperfect democracy is viewed as constantly evolving, yet in a post-Depression America, the need for socioeconomic stability was paramount, perhaps more than any other time since the Civil War.  An enduring portrait of American stability and a microcosm of everyday life, where part of its enduring legacy is that it dares to be sentimental, provocatively suggesting American life is sentimental, yet the overall impression is that it rings true.  Revolving around an everpresent stage manager, Frank Craven, who provides the eloquent narration (while also performing minor roles), seen with pipe in hand speaking directly to the audience from some small corner in town, continually changing his location, offering an aw shucks view of normal life where not much of anything dramatic ever happens in the New Hampshire small town of Grover’s Corner (modelled apparently after Peterborough, New Hampshire where Wilder spent his summers), a town characterized by its small size, the intimate closeness of the characters, and their familiarity with each other, as everyone knows everybody else, goes to the same schools and the same churches, greeting one another on a first name basis, where gossip provides all the drama the town ever needs.  Taking place over four days in three different years, from 1901, 1904, and 1913, allowing the past to continually unfold into the present, the story concerns two families that live next door, including the town doctor, the only doctor in town, doing his rounds on foot, Dr. Gibbs (Thomas Mitchell) and his wife (Fay Bainter), while his neighbors are newspaper editor Mr. Webb (Guy Kibbee) and his wife (Beulah Bondi).  Their steadfast persistence reveals everything we need to know about them, never calling attention to themselves or viewing themselves as any different than anyone else, yet they are viewed with reverence by their children, who see their parents as perfect in every way, seemingly having no faults.  But Mrs. Gibbs has dreams of seeing Paris one day, yet duty and responsibility defines their everyday lives, never in all their years taking a day off, or even a summer vacation.  That Protestant work ethic is ingrained into their children, particularly in the geographical region once inhabited by Puritans, revealing a very young and near unrecognizable William Holden as George Gibbs, the guy next door who continually has his mind on baseball practice, and Oscar-nominated Martha Scott as Emily Webb, a dedicated student where learning comes easy, growing into high school sweethearts who ultimately get married and build a life together in Grover’s Corner.  Their relationship turns on a dime in a beautifully written drugstore scene when their awkward friendship turns into a romance right in front of our eyes in just a few revelatory moments.  Like George’s mother, Emily dreams that “once in your life before you die you ought to see a country where they don’t speak any English and they don’t even want to,” yet what’s emphasized is the importance of a thriving community, as those that live there rarely ever leave, with gravestones that go back as far as the 1600’s, as generation after generation have chosen to stay and settle down there, making this their home town.  Instead of feeling suffocatingly the same, the town offers the fleeting joys of experiencing day-to-day life, becoming an ode to small town life, something of a dying breed in the 20th century, with the stage manager, acting in a compassionate and reassuring role of a sympathetic Greek chorus, offering carefully considered observations, revealing, “This is the way we were in our growing up and in our marrying and in our doctoring and in our living and in our dying.”

Offering a meditation on mortality, we’re quick to learn by the stage manager narration that an innocent paperboy seen onscreen performing his regular route will die fighting the war in France, while Mrs. Gibbs will die of pneumonia.  Revealed in such a matter-of-fact way, we soon realize this story is nothing less than the eternal story of humanity going back through eons of time, a subject so poetically elusive, so eloquent and, ultimately, so moving.  Instead of the big moments that grab all the allure and attention, what ultimately defines our lives may be seen in the smallest moments, where caught up in just living the everyday routine we may have missed the immediacy of the moment, the unique experiences that make us who we are, that precious mix of happiness and sorrow.  Given a second look at her life from the ghostly realms of the dead, Emily questions, “Do human beings ever realize life while they live it?—every, every minute?”  While that sounds like a utopian dream or a Buddhist transcendental state of nirvana, the question is how close can we really come?  Emily dies in childbirth while delivering her second child, a tragic figure of enormous dimensions, speaking to the other lingering dead souls who remain gathered around their headstones at the cemetery.  While the others feel an overly detached need to forget, immersed in a state of neverending timelessness, Emily remains as curious as ever, not yet ready to depart, wanting to remember as much as she can, returning back to an ordinary day, remarking upon feelings she never experienced before, seemingly taking life for granted, where she’s overcome by the overwhelming intensity of the moment, much more appreciative of those she’s leaving behind.  It’s a remarkably written final act, filled with surging emotions, literally communing with the voices of the eternal, where Emily’s sadness permeates throughout every scene, culminating with a strong desire to remain with the living, calling out “I want to live.  I want to live,” which actually happens in the film, as she awakens from a dream, a rewritten, much happier ending, something that never happens in the play.  It feels tacked on and completely unnecessary, as she’s already spent the same amount of time in the film coming to terms with her own death, where the depths of the tragedy have erupted onscreen, truly accounting for the profound sorrow, visibly expressing a cinematic purgatory that exists between the living and the dead, where she grows to accept the cycle of life for what it is, the story of humanity since the dawn of time, openly sharing her feelings with the audience, who have time to process and reconcile their conflicting emotions, only to flip the script in the last few seconds.  No doubt the theatrical version is more powerful, where life and death are intricately linked as part of the whole, yet the film accentuates the same tragedy, only changing course at the last minute.  While the movie is powerful enough, the Aaron Copland musical score is a perfect complement, providing the kind of fundamental pretext that served as a foundation for Leonard Bernstein, to whom the music was dedicated, in his score for Elia Kazan’s On the Waterfront (1954).  Written expressly for the film (losing the Academy Award for Best Original Score to Disney’s PINOCCHIO), it never resorts to maudlin sentiment or pulls at the heartstrings, Copland: Our Town (1940) - YouTube (10:52), not nearly as recognizable as Copland Conducts Appalachian Spring YouTube (27:10), or as bold as Fanfare for the Common Man YouTube (3:16), much smaller in scale, yet remains heartfelt and tender, capturing the essential nature of each and every lingering moment.