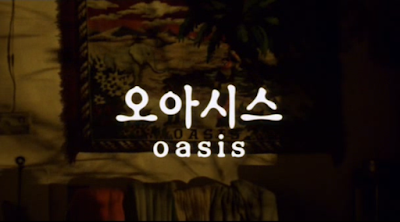 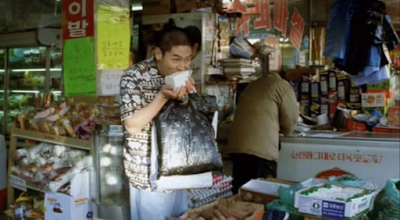 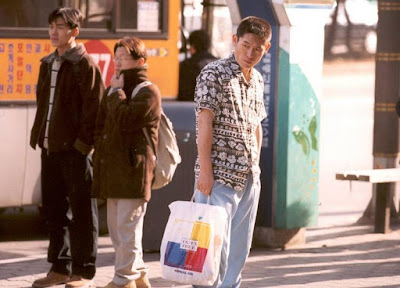 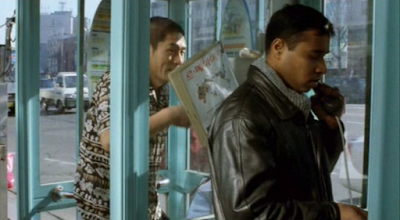 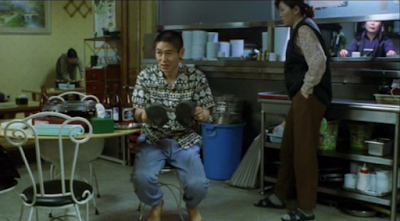 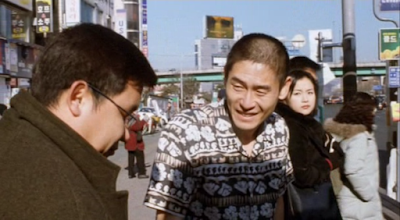 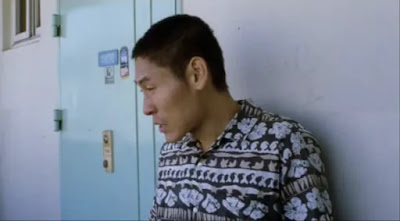 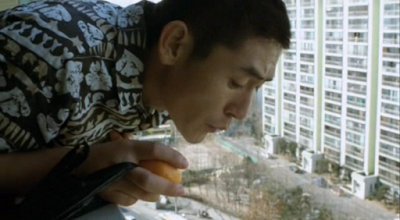 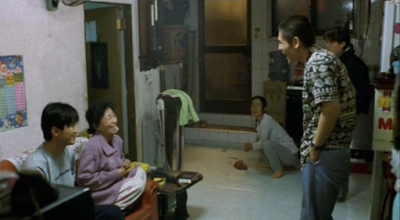 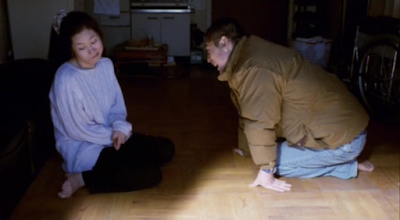 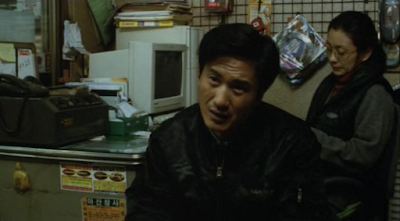 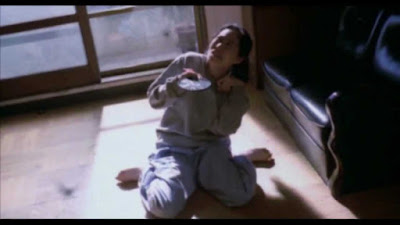 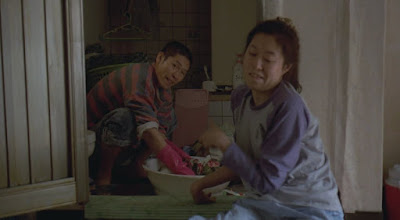 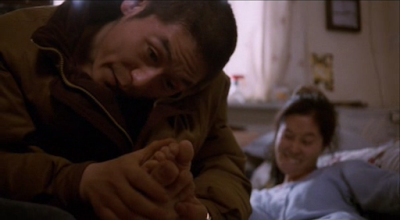 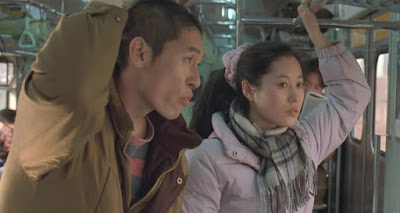 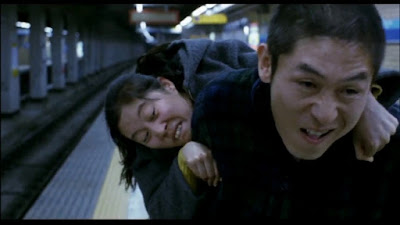 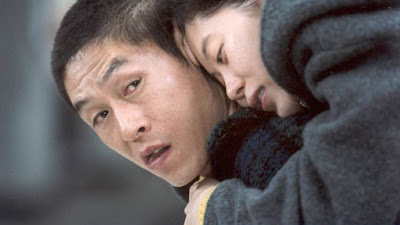 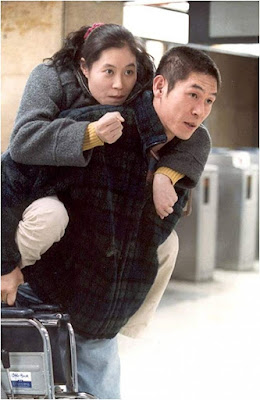 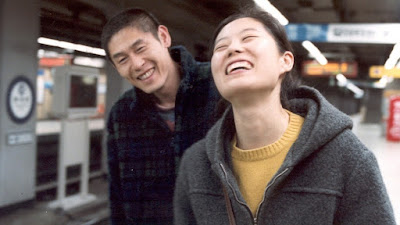 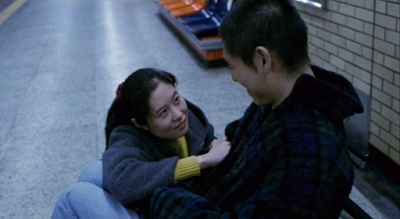 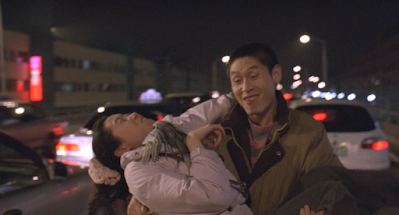 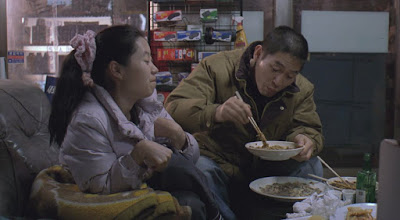 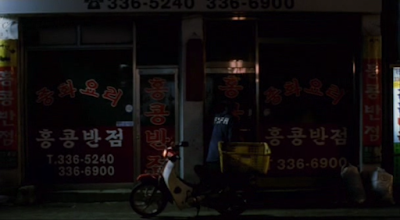 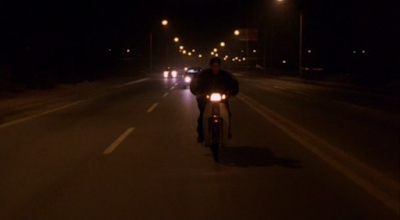 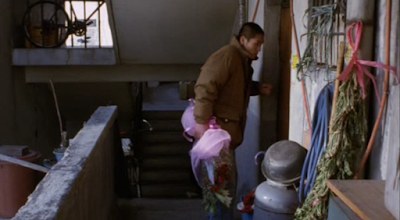 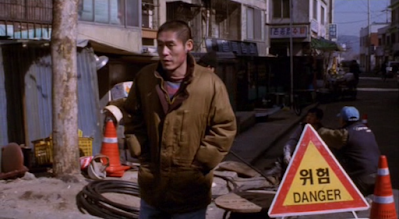 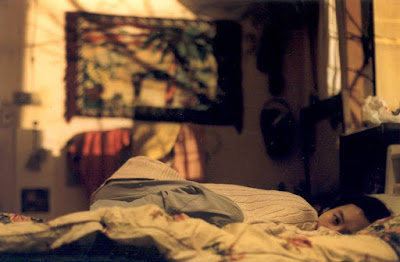 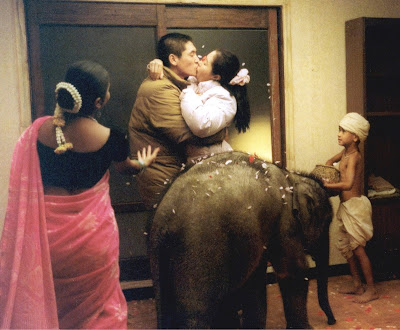 This is a wild adventure, bold and brutally raw, yet also unusually innovative and psychologically intriguing, a wretchedly close-up look at societal prejudice through one of the most improbable and disturbing love affairs ever captured on film, which is also heartbreaking, as there are small, intimate moments that will simply take your breath away.  Assuredly directed, evenly paced, using a whole arsenal of camera techniques, the film features two outstanding lead performances that couldn’t be more difficult for the audience to watch, each exposed through different opening segments.  Hong Jong-du, in a simply dazzling performance by Sol Kyung-qu, makes the impossible become possible, as his completely unlikable manner later becomes endearing to the audience.  He roams the streets in a short-sleeved Hawaiian shirt while everyone else is wearing winter clothes, smiling, affable, completely at ease with himself, though his body is a neverending series of nervous energy where he can’t stop himself from constantly wiping his nose throughout the film.  Others find him so repulsive that they think of calling the cops the moment they see him.  In American films, the seedy character of Ratso Rizzo from MIDNIGHT COWBOY (1969) comes to mind, but this character hasn’t half his brains.  The man defies convention, lurching into action the moment anything comes to mind, operating completely by instinct, his body a constant stream of twitching motion, never sitting still, so out of control on the edge of society that there’s no one else out there with him.  Recently released from prison, perhaps mildly retarded, certainly behaviorally challenged, his family has moved and changed phone numbers, perhaps hoping they never see him again, leaving him hanging in the wind trying to survive on nothing.  But when the police arrest him for failing to pay for meals, his family resumes the position of bailing him out of trouble, seemingly a neverending task.

Out of the blue and apparently without any thought to what would happen, Jong-du decides to pay his respects by bringing a fruit basket to the family whose father he was convicted of killing in the hit and run accident that led to his incarceration.  Outraged at the thought of seeing him again, they find his presence disgusting, but no more disgusting than what we soon discover they are planning to do, which is leave their seriously disabled daughter with an advanced stage of cerebral palsy, Han Gong-ju (Moon So-ri), alone to fend for herself in a rathole of an apartment while the rest of the family moves into a brand new spacious residence that was built to accommodate the needs of the disabled.  Gong-ju in a wheelchair is a sorry sight from the moment we see her, as her physical contortions are profoundly disturbing and awkwardly off-putting, her eyes moving around her unsteady head which itself has no muscle control, with stunted growth on her hands and feet, unable to walk and barely able on occasion to blurt out a few nearly unrecognizable words.  Adding to the wretchedness of this situation, Jong-du returns later to find Gong-ju alone and sexually assaults her to her hysterical cries and shrieks, only deterred when she faints, where he then actually takes the time to make sure she recovers.  With this brief moment of concern, our revulsion turns to amazement as an oddball friendship ensues.

In what could only be described as remarkable, the audience is immediately intrigued by Gong-ju’s use of a hand mirror, continually glaring it in Jong-du’s face, where the light reflections break up into surrealistic images of little butterflies.  Earlier, to the sounds of her singing a soft melody, we saw light rays in her room turn into a slow motion rendering of a white dove fluttering around her apartment.  These visions are sparingly used, but quite effective, as on occasion Gong-ju actually becomes the woman she envisions, completely healthy without any physical deformities, but still glaringly in tune with her partner.  When they meet, Jong-du tells her that her name in Korean means “princess,” which he affectionately calls her after that, claiming he was named after a famous general, the nickname she uses for him, but only after pointing out that the famous general he was referring to was actually a notorious traitor.  Meanwhile, Jong-du becomes her only friend, seemingly the only one who talks to her, even calling her on the phone, sharing noodles together, doing her laundry, washing her hair, and is certainly the only one whoever takes her outdoors from her imprisoned environment.  In the real world, however, no one sees her as a person, instead she is simply a deformed creature that people have learned to stay away from.  When Jong-du brings her to his mother’s family birthday party at an upscale local restaurant, the family is immediately repulsed at the sight of her and no one except Jong-du ever offers to help her.  After both being roundly rejected at the restaurant, Jong-du doesn’t want to go home but wants to make a special night of it, taking her to a karaoke lounge where he holds nothing back, screeching at the top of his lungs while singing her a beautiful love song.

From the long opening shot which focuses on an Indian tapestry hanging on the wall, like an exotic magic carpet showing a beautiful princess along with a young servant and an elephant at a water hole next to a giant palm tree, this film does an excellent job creating the fragile interior world of the lead characters, using music and eloquent fantasy sequences as brilliant contrasts from the blunt trauma of an uncaring exterior world that is a near documentary depiction of lower class deprivation.  As the film progresses, we learn how the families have turned their backs on both of these individuals in such a morally reprehensible manner that it’s as if society is tilted upside down, where the outside world is nothing but arrogance and self-serving class interests that blames or pushes aside anyone that stands in their way, making both of these hapless individuals easy family scapegoats.  Without ever mentioning it, both understand the degree of their social ostracization where there has never been anyone else who actually took the time for either one of them.  Over time, as the views of society prevail, this couple is but a faint glitch on a radar screen, thoroughly bulldozed by the larger societal interests and savagely misunderstood, where the realist world continues to have their own way of seeing things.  One can’t help but be utterly flabbergasted at what is achieved by the end of the film, where despite their wrenchingly sad predicament, there is something profoundly upbeat and emotionally cathartic about what we’ve experienced here, using vibrant exit music that has a Latin jazz tinge of what we might hear from Wong Kar-wai, leading to a tremendous climax that only dissolves afterwards over the end credits.  The exquisite music is attributed to Lee Jae-jin.  Moon So-ri’s painstaking detail in expressing her physical deformity is nothing less than phenomenal, apparently realized by living in a house of cerebral palsy residents for several months prior to the shoot, which certainly adds a spectacular layer of realism to the sheer look of this film, never for a moment overshadowing the equally stunning physical mannerisms of Sol Kyung-qu.