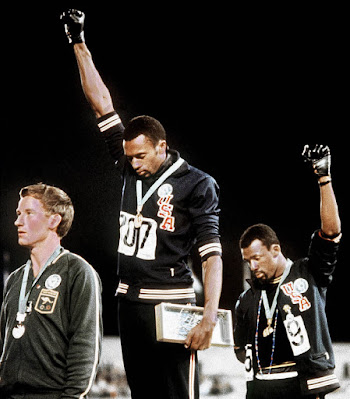 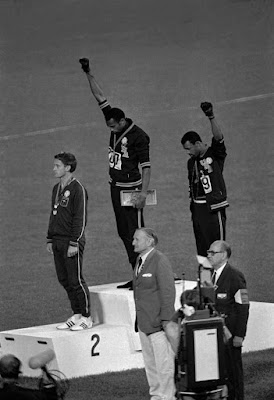 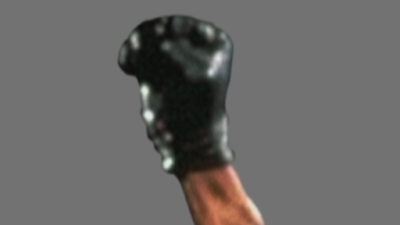 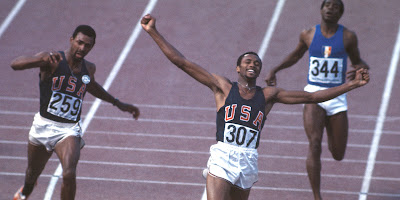 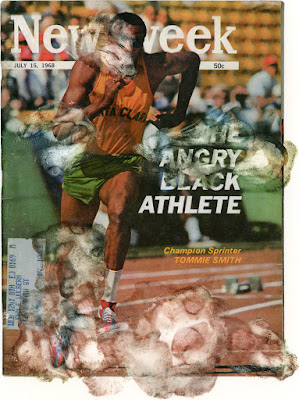 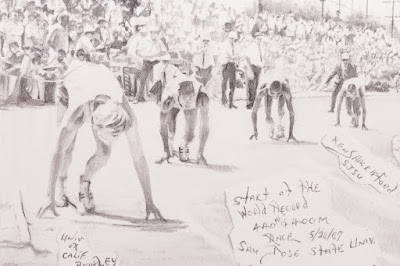 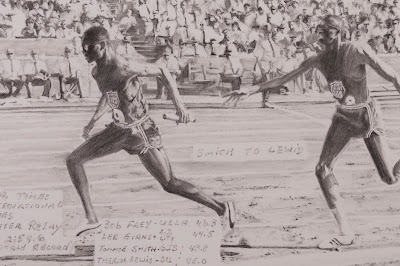 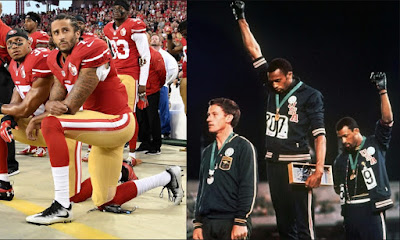 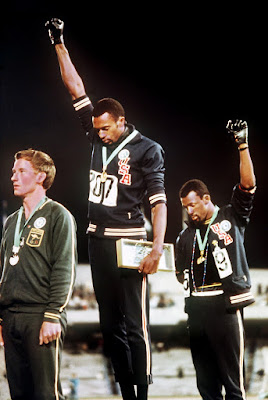 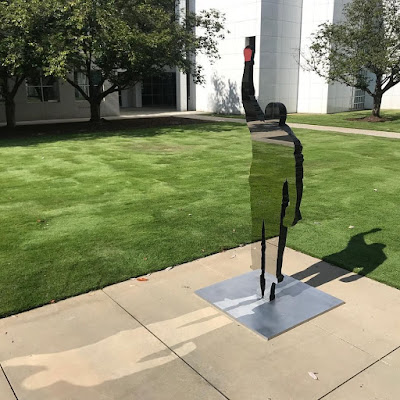 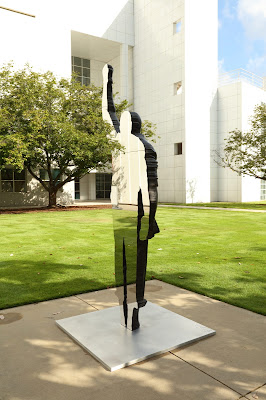 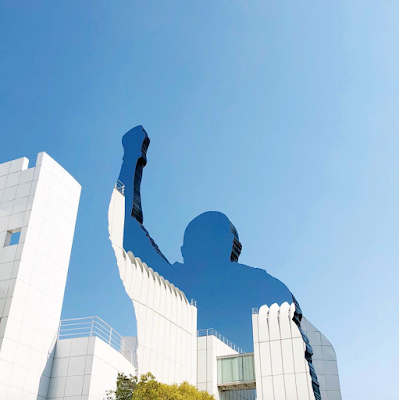 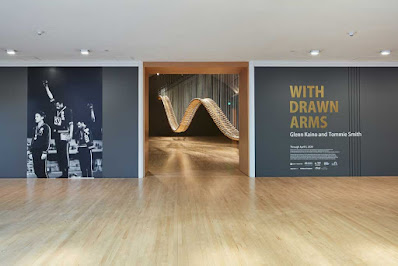 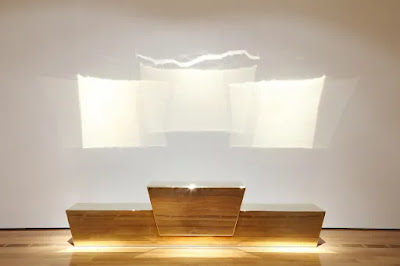 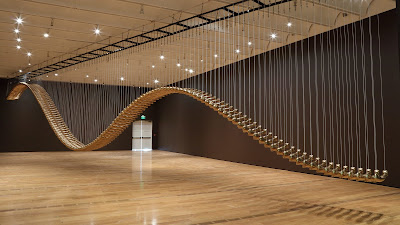 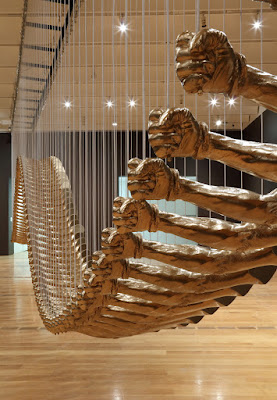 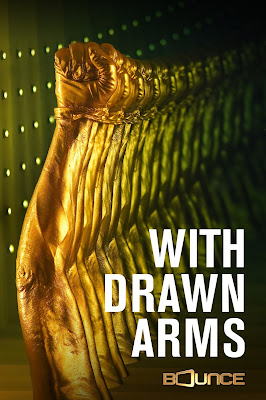 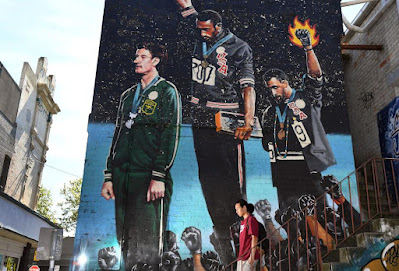 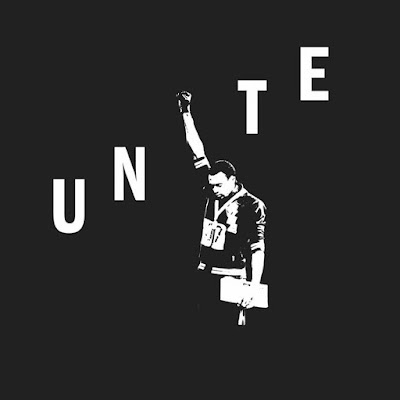 Like so many other films that get the 60’s wrong, this one is no exception, combining some of the more significant artworks of Los Angeles conceptual artist Glenn Kaino with 1968 Olympic 200 meter sprint Gold Medal winner Tommie Smith, the first to break the twenty second barrier in the race, yet he made history afterwards in the Mexico City medal ceremony when he and Bronze Medal winner John Carlos raised their fists from the podium during the playing of the national anthem, heads bowed, each wearing black gloves, described at the time as a black power salute, yet that iconic image remains a preeminent symbol for defiance, black pride, and solidarity.  In today’s world, it’s an affirming gesture symbolizing victory, where clinched fists or fist pumps are often expressed at the end of a game expressing triumph.  At the time it happened, the filled-to-capacity stands booed them vociferously, showering them with a wrath of open resentment.  If protest is meant to disrupt the status quo, certainly part of the desired goal is making people uncomfortable.  Castigated for their actions, the two were immediately sent home by the U.S. Olympic Committee, denigrated by the press, where eminent sportswriter Brent Musburger described the two black athletes as “a couple of black-skinned storm troopers.”  Paying a price for their actions, both men and their families were subject to abuse and death threats, ostracized by the sporting community, unable to find work afterwards, eventually falling on hard times, with their lives spiraling into emotional chaos and dysfunction.  It’s important to place the event in context, however, as 6-months earlier the Civil Rights Act had been signed, Martin Luther King was assassinated, and the summer was filled with riots and demonstrations, including a tent city of protesters that was erected in Washington, D.C.  The Democratic Convention was held in Chicago that summer, where the downtown parks were flooded by anti-war protesters who had a series of violent confrontations with the police each night captured live on nationwide TV, bloodied by nightsticks and batons and endless rounds of tear gas, chanting “The whole world is watching,” later described by a National Commission as a “police riot.”  The violence and racial unrest of that summer cannot be underestimated, which led black athletes, led by sociologist and civil rights activist Dr. Harry Edwards, to consider boycotting the Olympics, eventually deciding to utilize individual expressions of protest instead, leading to the actions of Smith and Carlos.   Had the film been about their 1968 protest, placing it context with similar protests of today, it might have had more appeal, instead it gets caught up in unfamiliar territory, as it documents the personal downfall of Tommie Smith, leaving out John Carlos altogether, basically narrating the story of his life, but the Tommie Smith of today bears little resemblance to the fiery athlete from San Jose State that broke a world record that stood for more than 40 years.

Instead, a 76-year old Tommie Smith is the central thread of the film, and while he’s amiable, he’s just not that interesting more than 50-years removed from the incident that defined his life, describing how his life has changed and been indelibly harmed by the aftermath, where his mother was sent feces and dead animals in the mail, believing that was the cause of his mother’s deadly heart attack, where early marriages ended prematurely, as he never really recovered from the emotional weight of the experience, carrying it with him his entire life, and while not mentioned in the film, the path of John Carlos followed a similar trajectory, as his wife committed suicide in 1977, leading him to a lengthy period of depression.  Both reached rock bottom in their lives, yet somehow persevered, even after an unappreciative public largely forgot about them.  It took 50-years before they were re-assessed by history, perhaps jumpstarted by the controversy surrounding the Colin Kaepernick protest of police brutality, disparaged and targeted personally by the President of the United States, openly blackballed by the NFL and kept out of the league, then suddenly a tidal shift happened following a swarm of international protests from the George Floyd murder.  Smith and Carlos were anointed to heroic status, where they are now linked among the 60’s black athlete activists that include Jim Brown, Muhammad Ali, Bill Russell, and Kareem Abdul Jabbar.  At the time it happened, however, the press wrote disparaging, anti-American comments about them, basically slandering them in public, linking the black power salute to the Black Panthers (1968), who were notoriously targeted by the FBI, smeared in public and described at the time as a terrorist organization, yet in that era any outspoken black person was viewed as a national threat, including Dr. Martin Luther King, who the FBI called the “most notorious liar” in the country, harassed and secretly followed under covert operations known as COINTELPRO, trying to expose him as a fraud and link him to the Communist Party, which is what they did in those days under J. Edgar Hoover.  Smith recounted an incident when the FBI followed him into a barber shop, where they obviously had a file on him and viewed him as a potential threat. Smith, himself, is the farthest thing from a radical, soft-spoken and reserved, keeping most of his thoughts to himself, spending most of the lonely journey alone, separated from friends and family, where he might have died early on had his third wife Delois not brought him back to his roots in Lemoore, California, a small agricultural community in the San Joaquin Valley, not far from Fresno, where the quieter lifestyle and more open spaces allowed him time to spiritually heal on his own, finally embracing his own life.  The film, unfortunately, never connects the downward trajectory of Smith’s life to the Olympics, becoming pure speculation, as similar death threats have followed others, like Henry Aaron as he pursued Babe Ruth’s home run record, but his life didn’t fall into turmoil, so the filmmakers expect viewers to take this heavily accentuated storyline on face value.

The final third of the film reveals the artworks of Glenn Kaino, who revered Tommie Smith growing up, finally getting a chance to meet him, making him the centerpiece of his collection of art, starting with a plaster cast of his arm, painted gold, connecting them to another 150 arms by cables, suspended in the air, entitled “Bridge,” a 100-foot long exhibition that fills up an entire room at the High Museum of Art in Atlanta, the cradle of the Civil Rights movement, giving new meaning to the raised fist, resembling a “Bridge Over Troubled Water,” Bridge Over Troubled Water - John Legend - North Sea Jazz ... YouTube (3:44), sung here by John Legend, one of the producers, singing the song over the end credits.  Another artwork was highlighting a Newsweek cover in 1968 where Smith was labeled “The angry black athlete.”  Kaino did a series of magazine covers each smudging out a different word of that headline, altering the meaning entirely, and by doing so implicating the power of words.  The degree of angered hostility that the protest generated stands in stark contrast to the measured tone set by the athletes themselves, who stood in silence, head bowed, yet offering a profound symbol for the fight for social justice.  Kaepernick’s protest of kneeling during the playing of the anthem was equally measured, hardly an act of provocation, where the controversy comes from the deafening noise of misunderstanding, from those that refuse to believe any association with police brutality or social justice.  It is no accident that blacks themselves, by and large, support these protest incidents, where for them there is no disruption or controversy, while those agitated by it seem to be whites resistant to the idea of social change.  Other spokespersons in the film are Colin Kaepernick, the late Congressman John Lewis, sports analyst Jemele Hill, and soccer star Megan Rapinoe, who herself emulated Kaepernick and kneeled during the anthem, but caught no flak for it, largely because she’s white, so whites feel less threatened by her act of resistance.  Kaino created an Invisible Man sculpture that from the back reveals the raised fist, recognized as a symbol of defiance, promoting change, yet the mirrored front takes on the camouflaged look of the surrounding environment, creating a different message depending on which side you see.  Kaino also developed a T-shirt that says “Unite”, where the letter “i” is Smith’s clenched fist.  Smith was also honored by being placed on the cover of a limited-edition Wheaties box, which felt very cathartic, as what was once viewed as extreme has now become part of the mainstream.  Smith was finally inducted into the U.S. Olympics Hall of Fame in 2019, yet two months later protests were banned at the Olympics, as the International Olympic Committee announced in 2020 that athletes were banned from any sort of “political, religious or racial” demonstration.  Just like they were in 1968, the Olympic Committee remains a picture of an unchanging status quo, becoming the last body on earth to appreciate or understand why any athlete would generate a message of social change. Apparently they’ve had their head in the sand for well over 50 years, so why should we expect them to be any different?  The current U.S. Olympic Committee Leadership board of directors is comprised of 17 members, where all but one are white, while the executive team is comprised of 13 members, all but two are white.  Until their racial configuration matches that of the athletes themselves, they will never be a true representative body, instead aligning their interests with the sponsors, as fundraising remains their primary duty.  For them, the individual humanity of Tommie Smith was never their concern, remaining invisible in their eyes.