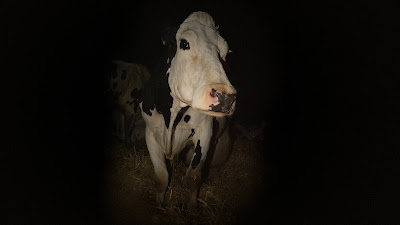 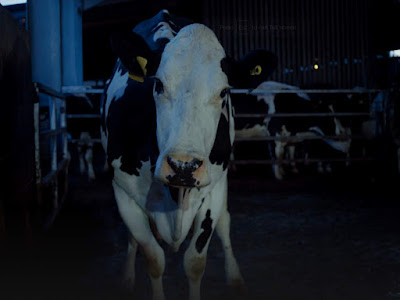 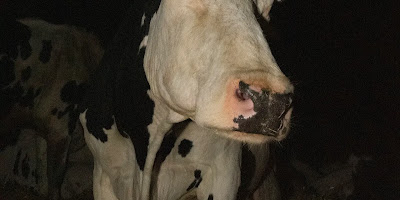 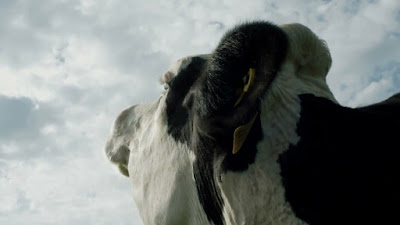 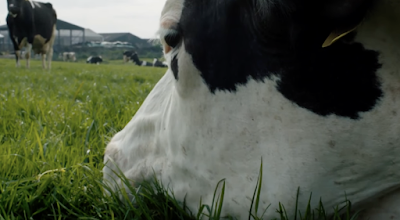 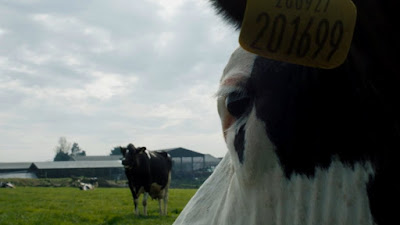 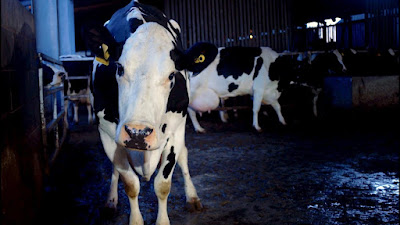 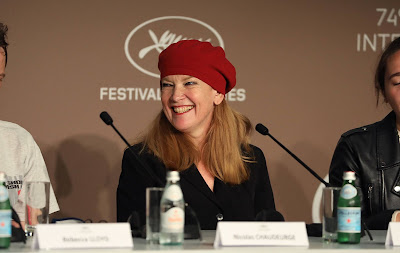 A documentary film that delves into the existential worldview of a cow, that may also be viewed as a snuff film, as the entire life of the film draws viewers into the perspective of a single cow, seen giving birth in the opening, cleaning up the newborn afterwards with her tongue, just like so many other animals, and then cruelty hits, as they take the young calf away from the mother during a mechanical milking session, moved to a nursery where it is bottle-fed milk, their ears clipped and tagged, their horns cauterized to prevent growth, with the mother seen in distress afterwards searching for the missing calf while calling out with endless mooing, yet there is no answer.  It’s a cruel turn of fate, as the film follows the routine at an English dairy farm over the course of six years, completely unglamorized, shot with an often shaky, handheld camera by Magda Kowalczyk, developing a relationship with this one cow, where the farmers themselves are viewed as secondary characters, often seen and heard on the periphery whistling or chatting away, regularly herding the cows from one pen to the next, often heading them into the milking stations, using mechanical milking devices while flooding the region with a Top 40-approved playlist of primarily female soft pop tunes that are heard as ambient noise in the backgound, as if this helps calm the animals down, but they never mix up the sounds to include jazz or classical music, so it feels overly melancholic, from Billie Eilish, Khalid - lovely - YouTube (3:20) to SOAK - Everybody Loves You (Official Video) (3:22), Mabel - Mad Love (2:51), for the mating scene, of course, or Birdy - Skinny Love [Official Video 2014] - YouTube (3:20), where the lyrics are often sorrowful and sad, where one wonders what effect this has on the animals.  With so much attention paid to a single cow, it brings to mind Pietro Marcello’s Lost and Beautiful (Bella e perduta) (2015), which similarly follows a man leading a young bull around the countryside in an attempt to keep it from the slaughterhouse, much of it conveyed from the bull’s perspective, given its own dreams, and even a soul, a film that also questions man’s relationship to animals, routinely taking them for granted, while also recalling an early Errol Morris First Person made-for-television short documentary film entitled STAIRWAY TO HEAVEN (2001), where Temple Grandin, an American scientist and expert on animal behavior devises a more humane way to slaughter animals, originating by communing with the livestock animals themselves and imagining how they would feel.

While some may claim the wonders of viewer empathy with a barnyard animal, but that’s already been done to perfection by Robert Bresson in Au Hasard Balthazar (1966), a near perfect film that reaches for transcendence and the sublime, so without any narration or dialogue concocting anything resembling a storyline, what this film really has going for it is length, as it sticks with an animal for an extended period of time, most of it spent in the crowded confines of a barn with other dairy cows, where it lives in its own filth, urinating and defecating where it stands, with hay strewn around to help filter the odors, but the grounds where they stand are always wet and muddy, where humans need heavy boots to walk around, yet cows have to live amongst constant filth.  On the occasion when they are released into open pasture land, it feels like an exhilarating freedom, where the space to roam and the quality of grasslands to eat is greatly elevated, immediately offering a higher quality of life, yet cows have only two options, either they can stand or sit, so there’s not a whole lot to identify with.  Much of this gets bogged down in the same old routine, where the monotonous life of a cow just isn’t that interesting to those of us who don’t live amongst them everyday, where they may take on a life of their own, like owning a horse, where a good part of the relationship is established in taking care of it, as you develop an affection during the time spent together.  That does not happen here, as the screen time is not with a single animal, but an entire herd of dairy cows, though one single female is highlighted throughout much of the film.  Andrea Arnold has made some powerful films, winner of the Jury Prize (3rd Place) at Cannes on three different occasions with RED ROAD (2006), FISH TANK (2009), and American Honey (2016), unafraid to accentuate miserablism, while also going off the rails on occasion with an overly abstract, experimental style in Wuthering Heights (Arnold) (2011), but this veers into different territory entirely, expecting a lot from her audience, indulging in her own personal fascination, offering her own autobiographical comments earlier this summer in The Guardian (We are animals. We need to connect to the millions of non ...), challenging our relationship with millions of animals around us that, according to recent scientific developments, Cambridge Declaration on Consciousness, each have their own conscious awareness.

As the cycle of life continues, we are surprised how soon after giving birth (60 to 90 days) that cows are again impregnated, placing them alone in a stall with a male bull, surrounded by all the other cows nearby, it’s not like this female was given any choice, as the high pregnancy turnover fits the farmer’s schedule, not the cow’s.  The juxtaposition of a nearby fireworks display seems trite and overly humanized, as that’s clearly not how the cow feels.  The farmers are elated to discover she’s pregnant again, where the exact same process plays out all over again, searching for that missing calf, where the repetitious brutalization of her life starts to become apparent.  Arnold intersperses shots of birds in flight, or airplanes, exuding a kind of freedom this animal simply doesn’t have, grounded in its own mundane reality, once more exposed to that top of the pops music which drones on as if having to listen to elevator music all day, as again, it’s not as if the cows have any choice.  When the snow flies and winter is in the air, one of the farmers is dressed in a Santa hat while the distinctive voice of Shane MacGowan can be heard singing an Anglo-Irish Christmas song, The Pogues - Fairytale Of New York (Official Video) (4:02), yet these animals have no real protection from the cold, as the barn is open-aired and not covered or heated.  In one scene a dead cow is seen simply laying on the ground, unattended, perhaps an all too frequent reality from which we’re naively unaware, but the starkness of the image seems to accentuate how little we know about the harsh life of farm animals.  The film offers ponderous moments where cows seem to stick their heads up, as if looking out into the sky, but more often than not it’s to evade the network of steel bars that surround them, pushed into them by the overcrowded pens, nearly impossible to avoid. Yet the cruelest fate is when they are led to their own destruction, a bleak reality that jars viewers into disbelief, wondering why a filmmaker would show that, as they’ve already established the heartless fate that awaits them, yet to watch an animal being killed that you’ve been observing over the course of an entire film is like a snuff film that some will find not just deplorable but unforgivable.  The scene brought to mind questionable choices in Haneke’s Benny's Video (1992) that were shown offscreen or the merciless Columbine shooting from Gus Van Sant’s ELEPHANT (2003).  While the director’s intent is to accentuate our disconnect with nature, according to a recent interview (Andrea Arnold on Capturing Cow, Bovine Beauty, and the ...), “We avoid all the uncomfortable things in life.  We don’t want to know, but life is uncomfortable sometimes.  Life is brutal sometimes.  That’s our reality.”  Yet it’s the spacy dreariness of the music that seems to haunt us at the end as we hear the gloomy and despondent sounds of Garbage - Milk (3:54) play out over the end credits.