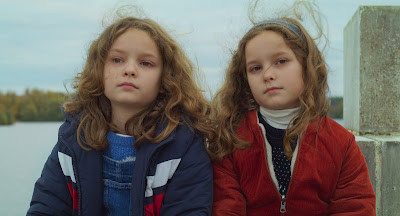 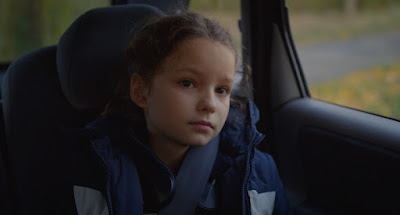 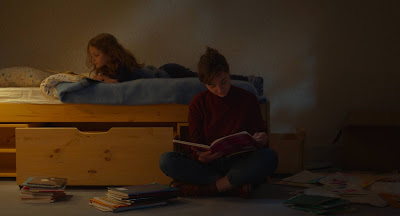 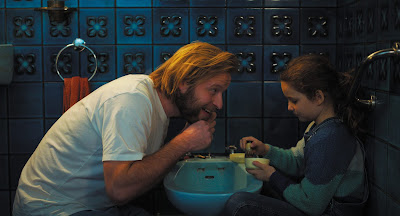 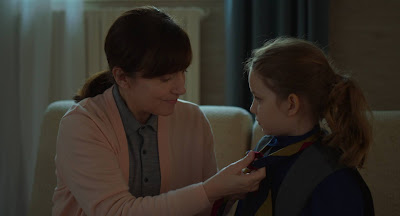 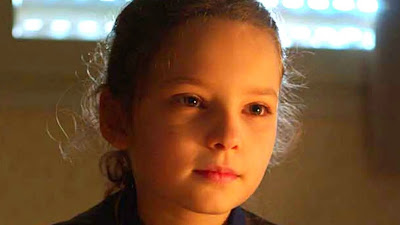 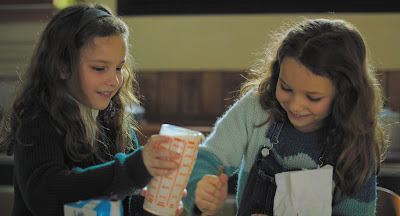 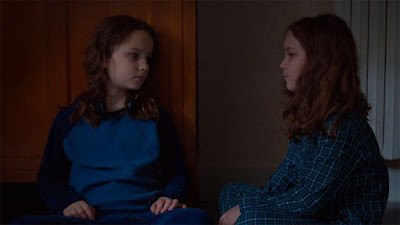 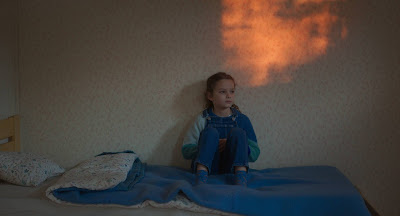 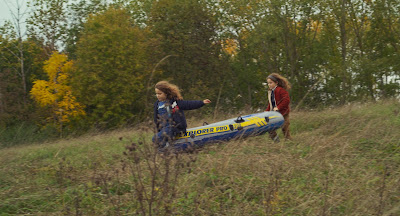 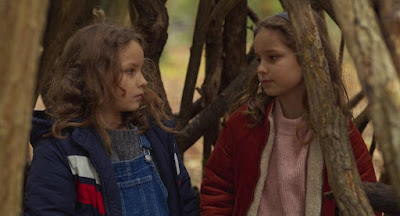 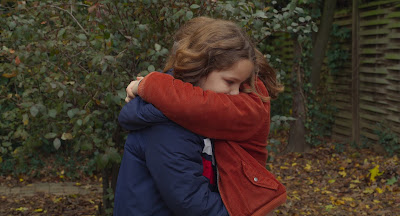 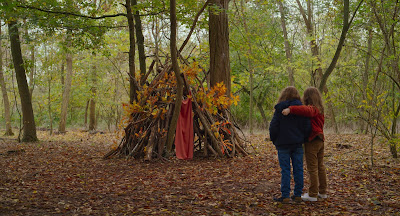 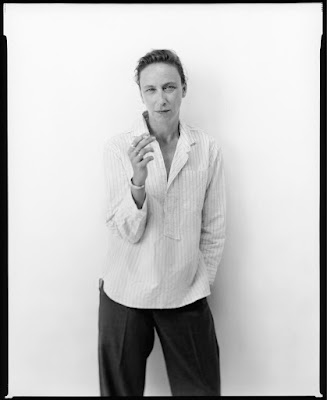 Some find this an enchanting film, an open dialogue between our past and the present, a kind of existential mystery that veers into the supernatural, with death having a pronounced effect on a young 8-year old girl, where two actual twin sisters, Joséphine and Gabrielle Sanz, are indeed extremely compelling figures who are utterly fascinating, yet the overriding storyline feels overly contrived, imposing adult dialogue and transcendent concepts that are well beyond the ages of the children, standing out as the only thing that is not natural in an otherwise totally naturalistic film, recalling an earlier effort by this filmmaker, Tomboy (2011), another modest film told through a child’s perspective, so this feels like a return to an earlier period in her filmmaking career in the way that it is filmed and realized, completely guided by a verité naturalism, yet is different in that it introduces larger-than-life themes.  Outside of the two young girls, who are utterly charming, bringing an elevated level of personal magnetism and mystique to the picture, offering proof of the director’s sheer artistry working with children, the rest of the cast feel overly slight, non-existent, even wooden at times, as if never really invested in the picture, completely overshadowed by these two young girls who really do carry the picture.  Featuring unusually long silences, much of this film is wordless and extremely spare, turning into a fable taking place in the woods, like a children’s fairy tale.  But it’s all preceded by the death of her grandmother in what appears to be a senior retirement home, with Nelly (Joséphine Sanz) affectionately saying goodbye to each of the residents before she joins her mother (Nina Meurisse) clearing out her grandmother’s room before heading out to do the same with her mother’s childhood home in the woods.  Affectionately sharing her snack and juice box with her mother in the car, there are a few awkward moments between mother and daughter, with her mother pointing out she always gets chatty and asks a lot of questions at bedtime, but Nelly states matter-of-factly, ”That’s when I see you,” while Nelly is less than satisfied with the few anecdotal stories her mother shares about her childhood, eagerly wanting to learn more, never really getting to know that younger version of her mother.  While her parents rarely speak, her father (Stéphane Varupenne) is kind and supportive, but is even more guilty of failing to connect on that earlier childhood connection, leaving Nelly a bit exasperated at times, while her mother is also grieving for the loss of her own mother, and disappears one morning without explanation, leaving Nelly alone to play in the woods, which have a gorgeous autumnal presence with the leaves turning color, beautifully filmed by Claire Mathon, shot in the same woods of the director’s childhood in Cergy-Pontoise, bringing a spirit of enchantment to the picture.  But nothing out of the ordinary happens until the next day when she sees another young girl her exact same age in the woods, her identical twin Marion (Gabrielle Sanz), lugging some tree branches to make a hut in the forest, becoming their own secret place.

Marion invites her home, which is identical to her grandmother’s home, with the same wallpaper, only with furniture, with Margo Abascal playing Marion’s mother, yet the two girls play games and have fun, while growing curious about each other.  Both are sad that they have no siblings, which seems to draw them closer to one other.  They also act out stories while wearing costumes, with Nelly asking Marion’s mother for help, yet it’s the interaction of the two girls that carry the picture, mimicking the world of adults, never carried away with overacting, always maintaining a strong sense of self, both very determined young ladies who immediately connect with each other, becoming the friend they never had, though they are challenged by time restraints, as once Nelly’s parents finish clearing out the home, they will depart back home, expected to be just a few days.  Playing out in the woods together, fortifying their handmade fort, Nelly reveals an ominous hidden secret, informing Marion (the same name as her mother), that she believes she is her mother as a young child, and that Marion’s mother is her grandmother, so this time together allows them to interact in ways they never could before.  Now this is a blockbuster revelation, way too complicated for an 8-year old to figure out, yet there it is playing out before our eyes, like a storybook coming to life, allowing viewers to immerse themselves into a developing fantasy world, a lushly realized children’s story that suddenly has adult implications, incredible perhaps, yet a ponderous possibility, where the appeal of the two young girls may lure you into thinking they believe it, as children believe things without hesitation, without bias or filter, but simply believe.  The light airiness of the film couldn’t be more polar opposite than the density in Krzysztof Kieślowski’s THREE COLORS: BLUE (1993), yet both deal with similar themes, though here a story of death and grief evolves into an out-of-body experience, illuminated by what amounts to a wish-fulfillment fantasy, yet perhaps the bravery of the film is the director’s willingness to portray a child’s world with this degree of worldly enhancement, valuing their emotional intelligence and their ability to adapt to things we view as complicated.  Perhaps the essence of this film is that it’s a woman’s picture, internalizing the female experience, accentuating the bond between a mother and child, which doesn’t have to make sense, as so much of it is instinctual, learning by feel, allowing the spirit to express itself onscreen.  Now if this was an animated feature, a Miyazaki picture, for instance, would we be viewing it any differently?  Miyazaki seems to have been a strong influence on the making of this film, as unlike Disney, Miyazaki’s children stories confront real-life dilemmas that can be profoundly scary, like the potential death of a sick mother who is away at a hospital in MY NEIGHBOR TOTORO (1988), sending chills of fear into her children, who invent a fantasy world to cope with it.  Because this film plays out in such a realist manner, we may get caught up in the details, as there are transcendental elements here that appear jaw-dropping, yet the matter-of-fact style is how the director has chosen to convey this message, using no special effects, only magical ideas.

Lacking the luxuriance of her most recent film, 2019 Top Ten List #2 Portrait of a Lady On Fire (Portrait de la jeune fille en feu), this seemingly effortless film is unusually low-key, remaining ambiguous in every respect, which can be off-putting and a bit disconcerting at times, where the short film duration does not allow viewers much time to adjust to what’s happening onscreen, yet it’s certainly a provocative film.  And while this may be a BACK TO THE FUTURE (1985) ghost story, it never feels like one.  Shot during the Covid pandemic, limited to small sets and minimal crew, that fact belies the richness of the film’s detail, and the bright color of the forest, though it may tap into shared themes of profound grief and loss.  Nelly inquisitively leafs through her mother’s childhood journals, extracting bits and pieces of information, exhibiting a healthy dose of curiosity, a trait she shares with Marion, while Marion’s mother is already walking with a cane that Nelly kept as a keepsake after her death from some undisclosed terminal illness.  Marion is due to undergo surgery in just a few days so she doesn’t suffer the same fate, acknowledging a certain amount of fear, with Nelly helping her pack a suitcase for the hospital.  Yet the overriding factor is the developing friendship between the two girls, who seem to hide nothing from each other, always speaking directly, yet so much is communicated without ever uttering a word.  Nelly can’t help but wonder what happened from the playful and uninhibited child that Marion is to the closed-off adult that she is now, where her unexplained departure leaves an emotional gap that she’s trying to fill, remaining a bit of mystery.  The subject of grief is filtered through childhood innocence, as the girls mischievously make pancakes together, spilling ingredients, rubbing some of the mess on their face, laughing giddily, where their humor is infectious, yet Nelly is especially mature and perceptive, quickly picking up on things, like Marion’s changing moods, already exhibiting signs of melancholy, which she’s seen happen with her own mother and predates her recent loss.  But Marion is quick to point out, “You didn’t invent my sadness,” which feels uncommonly generous, like an overly insightful and completely incomprehensible thing for an 8-year old to understand, but these girls display a rare degree of empathy.  It can be jarring to hear young 8-year olds speak like adults, but that is part of the inversion of this film, as they’re the ones exhibiting uncommon insight, while the adults exist only on the periphery.  Among the more transfixing scenes is a raft ride on a lake, paddling to a destination out in the middle that resembles a lost Mayan ruin, like the pyramid structure of El Castillo that seems to hold mystical powers, adding an element of complexity and depth that is never explained, but challenges the imagination, as if exploring the deep recesses of their own subconscious, accompanied by exhilarating music they call “Music of the Future,” Mon Coeur (Bande originale du film "Petite Maman") - YouTube (2:20), offering an uplifting air of euphoria.  Exploring themes of female identity in such an unusual manner, mixing childhood with adulthood, seems like an original choice, yet death in this film always seems far away, more like an abstract concept, yet the film does engage in difficult territory too often left unexplored.