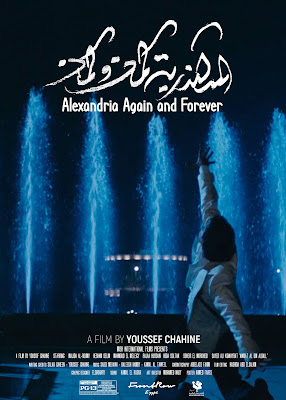 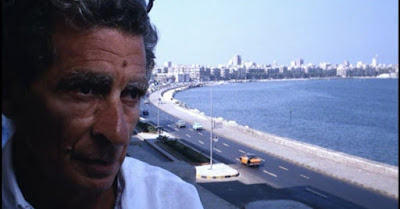 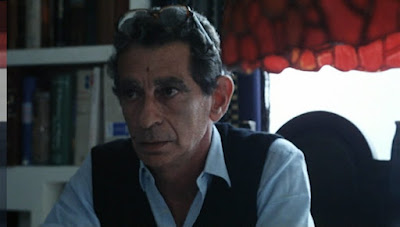 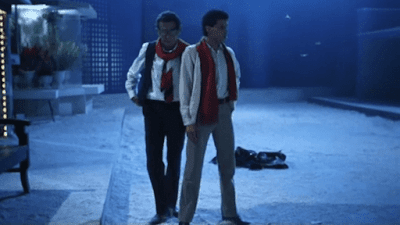 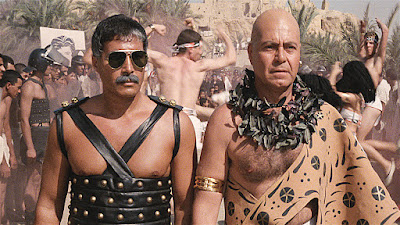 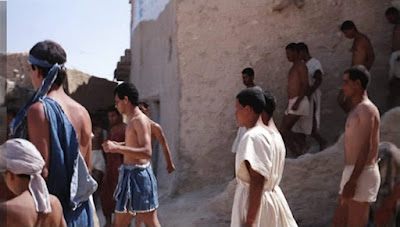 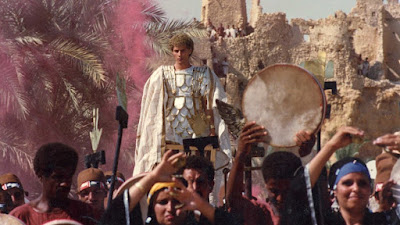 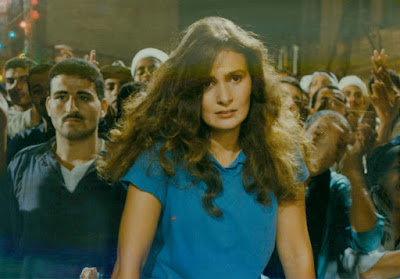 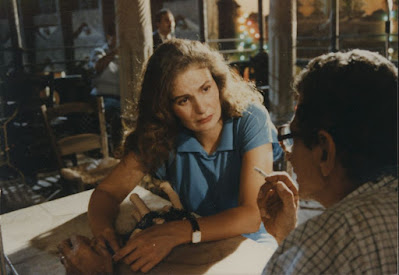 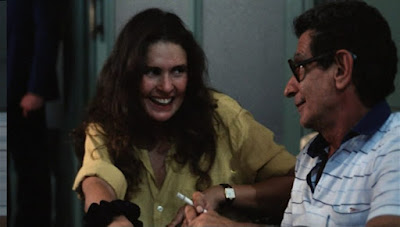 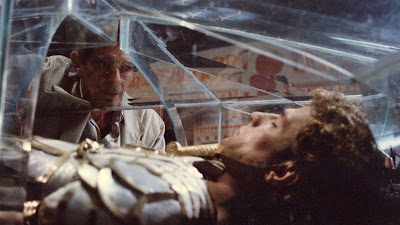 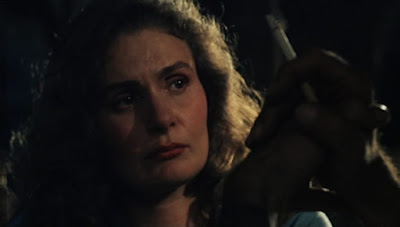 Dialogues are in Arabic, it becomes more humorous, French for love scenes, English for accuracy and precision.  My father is Arab, my mother is Italian, my wife is French.  I speak Spanish and a bit of Russian quickly and unintelligibly.  As I am from Alexandria, I can no doubt conjure up Greek as well.           —Yehia (Youssef Chahine)

The final segment of his Alexandrian Trilogy, an Egyptian and French co-production, co-written by Chahine in collaboration with Yusri Nasrullah, placing Chahine himself in the now grown-up role of Yehia (played by Mohsen Mohieddin in the first Trilogy installment), the autobiographical alter-ego of the filmmaker, already feeling some success as a filmmaker, looking comfortable in a large apartment with wall-to-wall windows overlooking the sea.  But the film opens to a mournful Arabic song of Hamlet’s soliloquy, so instrumental to his film Alexandria...Why? (Iskandnerija…lih?) (1979), though the seaside setting of Hamlet in a sleepy Egyptian fishing village is something of a stretch, with Hamlet walking on the beach pondering his fate under an enlarged skeletal frame of a wooden ship sitting in its own ship graveyard.  This is a more fractured and less focused version, which may be more difficult for viewers, as it never really finds its footing, trying too hard to accentuate the Alexandrian identity through a Western lens, force feeding, some might say, all in an effort to repeat themes better realized in his original Trilogy film, not nearly as provocative or challenging and without much of an interest factor, feeling like this is territory already covered.  Chahine is a known bisexual, splitting screen time between two romantic partners, a younger actor playing Hamlet in the first half, Amr (Amr Abdulgalil), and a firebrand actress leading a labor movement in the second half, Nadia (Youssra), where the personal and the professional intersect, often hard to tell the difference, though his imagination grows more emboldened with Amr, investing a decade molding him into the actor he desires.  But Amr grows tired of being told what to do, exhibiting a sense of rebellion, trying to remove himself from the obsessional straightjacket of confinement, always having to be what someone else wants, never what he wants to be.  When Yehia insists he play the role of Hamlet, Amr senses the part is too demanding for his talents and refuses the role, while also having to fend off homosexual rumors about their sexual liaison, storming out of the apartment in disgust, yet Yehia persists, with his wife Gigi (Menha Batraoui) threatening to leave if he runs after him, claiming he’ll return if he wants the part.  Merging fiction with real life, this becomes a memory piece, sitting alone, remembering his overbearing approach on the set, making Amr brutally endure repeated retakes, always overly critical of his performance, never satisfied, becoming a cruel and tyrannical taskmaster that borders on sadism, demanding perfection, which is apparently different in his eyes than that of Amr, who struggles with a growing resentment.  However, inspired by music he plays on a Walkman, Nat King Cole singing Walkin' My Baby Back Home - YouTube (2:42), he imagines Chahine’s earlier triumph at the Berlin Film Festival where he took home a prestigious Silver Bear 2nd prize for Alexandria...Why? (Iskandnerija…lih?) (1979), the first Arabic film to win an award, recreated with Amr at his side, both beaming with pride, celebrating their relationship, extending into a fantasy soft-shoe dance sequence emulating SINGIN’ IN THE RAIN (1952), but replacing rain with a light cover of snow on the streets.  It’s a mesmerizing sequence, with Chahine performing his own song and dance routines some forty years after he did the same in Cairo Station (Bab el Hadid) (1958).  When they bring a film to Cannes, they expect Amr to win a coveted best actor prize, but when he doesn’t, it results in a memorable dance of disappointment performed by Amr around the fountains of Cannes, where the garish backdrop could just as easily be Las Vegas.

While continually melding the story of a filmmaker and his country onto the screen, merging fiction with real life, what follows goes absolutely haywire, as Yehia imagines Amr in a grand burlesque, Jesus Christ Superstar rendition of Macedonian King Alexander the Great, who founded the city of Alexandria in 332 B.C, becoming a cheesy toga costume drama resorting to gratuitous comedy sketches that resemble the kitschy production values of Woody Allen’s SLEEPER (1973), with deliberately sped-up shots, referencing Keystone cops slapstick, resorting to a kind of pedestrian self-mockery, which some may find entertaining, but it goes off the rails into unwatchable territory, falling apart completely, bordering on the ridiculous, particularly when adding lyrically-challenged songs with Chahine singing strangely off-key.  This quest for the visually spectacular turns into a deranged delusions of grandeur set-piece gone wrong, though it does add some serious questions about how Yehia loftily imagines Amr, or is it how he views himself, all of which adds to the confusion that comes with staging such an exalted parody piece.  This conflict with his leading man causes Yehia to reevaluate his life as a film director, the industry itself, and his own sexual and romantic longings, growing ever more disillusioned after Amr mysteriously disappears without a word.  Finding himself in limbo, shocked that his favorite actor will no longer work with him, he connects himself to an industry strike by actors, filmmakers, and musicians over a law forbidding term limits of union leaders, with the government hoping to extend control over the arts, including pressure on filmmakers with censorship, something Chahine fought against his entire lifetime.  In fact, Egypt has governed in an increasingly authoritarian manner, leading Chahine to dedicate this film to “all Egyptian artists and filmmakers fighting for democracy.”  The second half of the film is less flashy and doesn’t stray too far from a documentary approach, uncompromising in its controversial themes of homosexuality, offering a commentary on the country’s corruption, and an exploration of the successes and failures of his own personal and professional lives, while recreating an actual 1987 strike that took place that included Chahine on the front line.  Gathering at the union hall, beds are scattered around, with Chahine finding himself a spot where he can write, but finds himself engaged with the vehement arguments continually taking place, as they refuse to cave to the government’s demands, going on a rotating hunger strike to prove their point.  But here he’s struck by the fiery facial expressions of an outspoken and impassioned actress and union leader, Nadia, quickly envisioning her as Cleopatra, the famous Egyptian queen.  He speaks to her about Shakespeare, having witnessed the last performance of Hamlet by the great English actor John Gielgud, with his mind wandering to Mark Anthony, while also mentioning Sostratus of Cnidus, the supposed designer of the Lighthouse of Alexandria, a mythical figure that appears again later in the film, as the film questions the essence of being Alexandrian, continuing an experiment with intertextuality, mixing his own autobiography with Alexandrian history, mythology, and an array of western influences.

We learn that Amr’s career has taken a turn for more lucrative job opportunities, working in commercial films, not really expanding his artistry, selling his soul to mediocrity for the all-important petro-dollar industry, as Yehia describes it, a corrupting influence that becomes a central theme of the film.  As a filmmaker, Yehia wants to leave his own mark of individuality, but also wants to reach out to Western audiences as a way of increasing his audience, which is difficult, as his films primarily play in film festivals, but are overshadowed by larger works that eventually make their way into Western theaters, while he remains a relatively obscure artist virtually unseen in the West.  Chahine had no commercial releases in America until DESTINY (1997), receiving a lifetime achievement award at Cannes that same year, which was followed by a 15-film retrospective a year later, yet he still remains criminally underseen around the world.  Chahine makes extensive use of his earlier film Cairo Station (Bab el Hadid) (1958), seen playing on television in the union offices, again at Nadia’s mother’s house, where she proclaims The Land (al-Ard) (1965) as his best film.  Unlike Amr, Yehia doesn’t try to change Nadia, instead admiring the stirring intensity she brings, imaginarily staging a version of Anthony and Cleopatra, which begins, oddly enough, with the arrival of Anthony on the craggy shoreline rocks, but includes the burning of his fleet, and their last dying breaths.  Much of the brisk dialogue and back and forth between Yehia and Nadia examine an artist’s struggle, as she questions why he hasn’t acted in so many years, characterizing him, “People often think that you are a monster.  But the truth is — you are transparent.”  One of the most unforgettable scenes is an infamous “stick dance” of the director with a handsome yet anonymous man discovered at a street carnival where Yehia offers a brief dance for a swelling crowd, but this man refused to accept a short performance, providing a form of street entertainment, turning it into a longer and more stylishly personal symbol embracing his homosexuality.  Nadia finds it remarkable that he can develop instant chemistry with a complete stranger discovered on the street.  “You worship actors, don’t you?”  In this he reflects the character of Hamlet, who exposes bits and pieces of himself throughout the play.  Yehia tries to do the same with his filmmaking, believing Alexandria is the blueprint for western civilization.  Despite the fractured visual style, mixing memories with fantasy reveries, it’s also a story about cinema itself and the making of a movie, yet it’s the worker’s strike that unleashes an ongoing political debate about democracy and power, where Yehia and Nadia are at the center of the debate, critical of their own strategy, yet often doubting whether they can hold the line against government opposition.  When a victory is declared, people quickly scatter, with Yehia losing track of Nadia, wondering what’s become of her, hoping to offer her a part in an upcoming film, and she does appear in AN EGYPTIAN STORY (1982), again in THE EMIGRANT (1994) and ALEXANDRIA…NEW YORK (2004).  Yet a climactic scene appears at an assembly of the actors guild afterwards, viewed as a political battleground, with Yehia filming it as a documentary, but instead of a tense negotiations of differing views, a truce breaks out, declaring unity, with chants heard of “One voice!  One heart!” echoing Chahine’s desire for democracy, as a unified people are seen overturning a repressive law.  Overall, however, this film conveys a sense of profound loss, accentuating the insurmountable distance that exists between a filmmaker and those actors he so closely works with, yet may also reflect how democratic values and freedom of expression are losing hold in a country in crisis.  While Chahine attempts to resurrect the historical icons associated with the city, the film does serve as a vehicle for the director’s reflections on the foundational myths of the city.