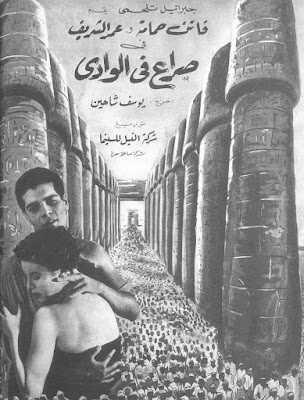 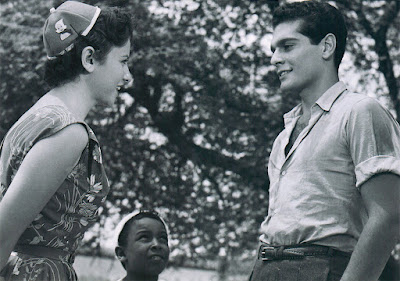 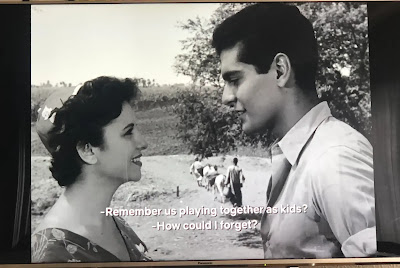 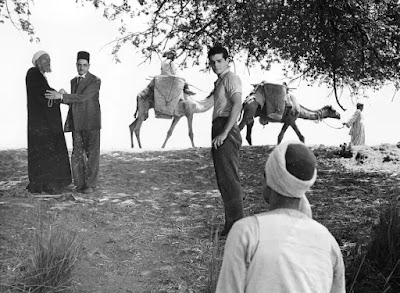 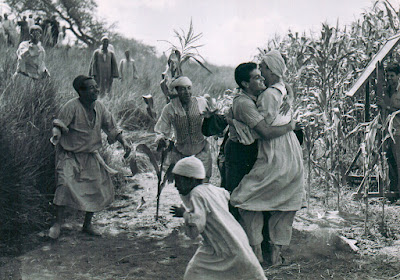 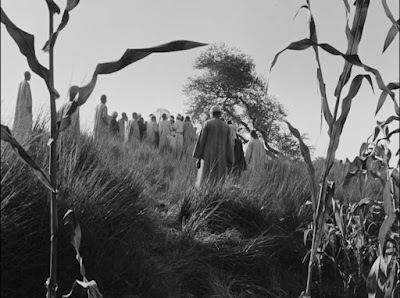 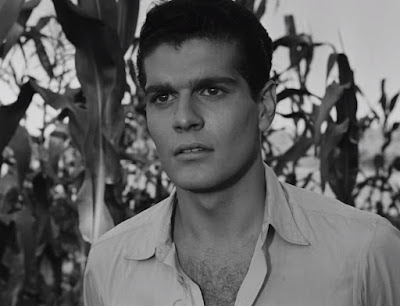 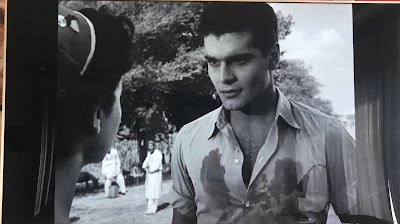 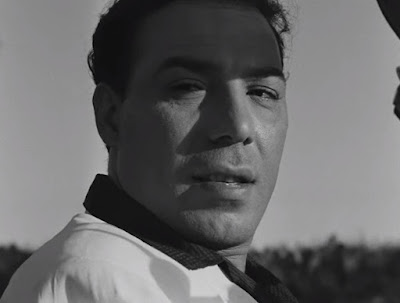 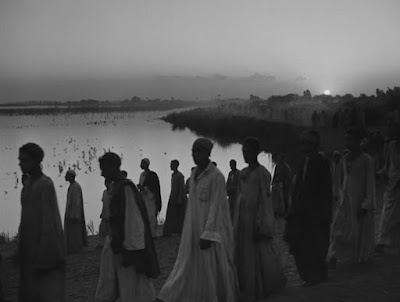 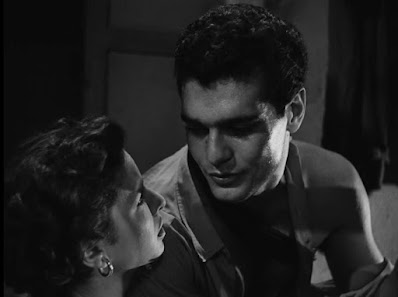 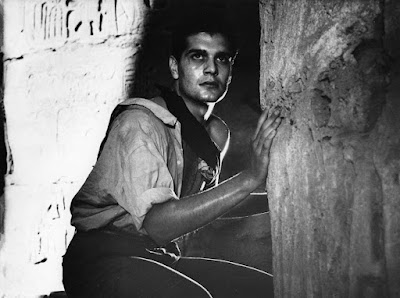 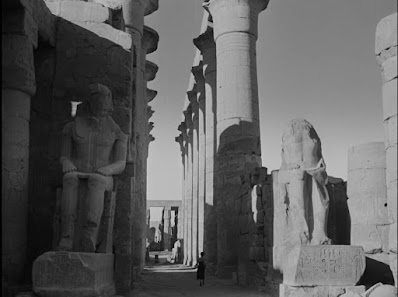 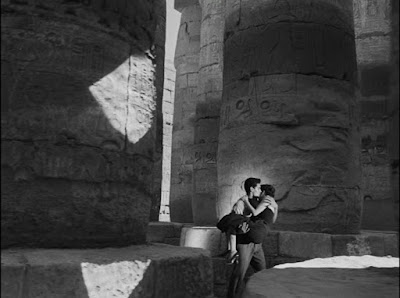 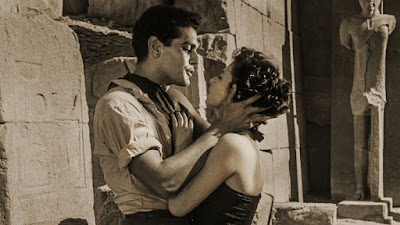 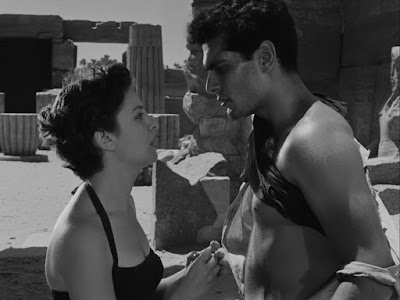 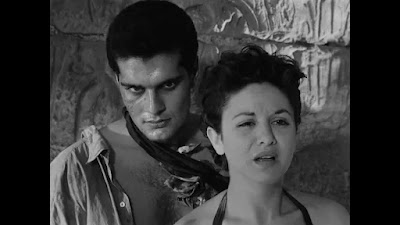 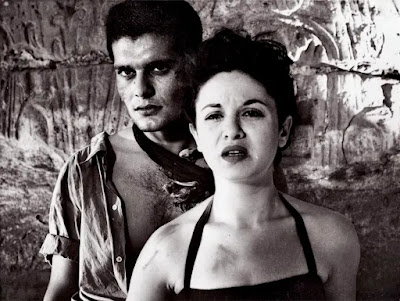 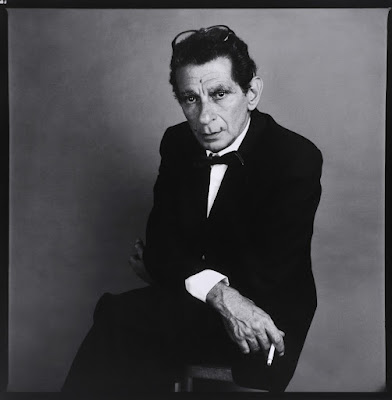 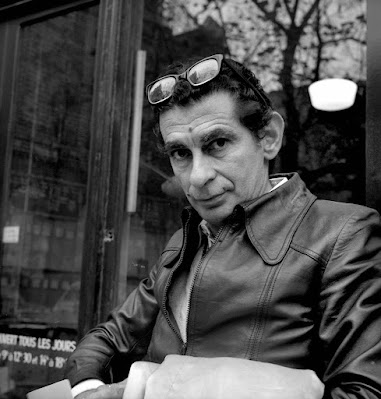 As Egypt’s most celebrated director, Chahine would go on to make 44 films over six decades, including 13 films in the Top 100 Egyptian films, employing widely diverse styles of social realism, melodrama, musical comedy, political thrillers, psychological dramas, and even grand historical spectacle, often intermixing genres within the same film, described by Egyptian political novelist Ahmed Khaled Towfik as the only Arab capable of queer representation in his films, whose versatility always offers insight into the Arab world.  Born into a Christian family in what is predominantly a Muslim nation, his mother was Greek while his father was Lebanese, yet despite a few clashes with Muslim fundamentalists, Chahine has always prided himself as being an Egyptian.  Educated at the prestigious Victoria College, whose alumni included King Hussein of Jordan, King Simeon of Bulgaria, Prince Abdullah of Iraq, Edward Said, and Omar Sharif (who stars in this film), he trained as a method actor while studying theater and television for two years at Pasadena Playhouse in California, returning to Egypt to embark on his own film career, where his first three features were shot while Egypt was still under British colonial rule, but his career took off after the Egyptian Revolution of 1952, which brought Gamal Abder Nasser to power, along with a new vision of modernization and socialist reform, allowing cinema to flourish, receiving large government subsidies, as it was part of the new national identity and culture.  Chahine developed his own filmmaking style, often including musical numbers in the midst of high drama, yet history and politics are interwoven into the fabric of his films, where his concerns of a post-colonial Egypt bring to mind Satyajit Ray in India and Ousmane Sembène in Africa.  Due to Chahine’s prominence on the international stage, regularly playing on the film festival circuit, actors often forego their salaries just to work with him, some receiving only a token payment, as his films are costly, with little left over to pay starring actors, yet at the same time employees of his production company are well paid, considered the best paying producer in Egypt, with Chahine taking pride in offering so many employment opportunities, with as many as two hundred families receiving compensation.  In his early 50’s films, among the first to take advantage of government subsidies, Chahine displayed a keen interest in class and social change, mirroring the political developments in the early stages of the Nasser leftist national revolution, spawning a social realist movement, blending together cinematic trends of French poetic realism and Italian neorealism, as Egyptian cinema was, in fact, encouraged to express themes of social justice, national liberation, Arab unity, and anti-colonial struggles.  Chahine’s films were extremely popular in Egypt but also stoked controversy with their portrayals of sexuality (including homoeroticism), capitalism, gender, corruption, and religious extremism. Recognized in 1997 with the Lifetime Achievement Award from the Cannes Film Festival, Chahine’s works have recently been restored, yet some parts of this early work remain patchy at best.

Premiering in competition at Cannes, Chahine has introduced a rural drama as a morality tale, pitting the rich against the poor, condemning the evils of a decaying aristocracy, including the feudal system that was prevalent in the Egyptian countryside before the 1952 Revolution, while also offering a supposedly taboo class disparity movie romance.  Set in a small village along the banks of the Nile River, in the Valley of the Kings near Luxor in the south of Egypt, the film stars Omar Sharif in his first film role, known at the time as Michel Dimitri Chalhoub, supposedly discovered by the director sitting in a café in Cairo with the director urging him to audition, where he was cast opposite Faten Hamama, one of Egypt’s reigning film actresses since the early 1940’s, with the two developing such a romantic interest that they were married shortly after the filming ended.  As Sharif was born a Catholic, he changed his name and converted to Islam in order to marry her in 1955, where the two were an idealized couple for the next twenty years, the Elizabeth Taylor/Richard Burton romance of their era.  Sharif is Ahmed, narrating the opening in voiceover, a recent agriculture engineer graduate returning back home to improve the crop production of the local sugar cane crop, with hopes of bringing working class prosperity to the village.  It should be noted that both the British and the Turks were known for enslaving locals in the sugar cane fields during colonial times, so this represents a post-colonial development.  Dressed in traditional Arab garb, living in meager circumstances, their hard work in the fields finally pays off, as their product is rated as the best, securing a lucrative deal from a major sugar company, which should change the fortunes for many of the workers who have traditionally been exploited by the landowners, who stand in stark contrast to Pasha (Zaki Rustum), the millionaire sugar magnate living in a massive plantation estate, a feudal overlord that remains a remnant of the past, dressing in western clothes, while driving a modern convertible car.  He’s not too enthused about the recent turn of events and greedily plots his own nefarious plan of action with his contemptible nephew Riad (Farid Shawqi), who carries out the dirty business for the family, as he plans to flood the lands and destroy the village sugar cane crops, driving the villagers out of their homes while depriving them of inheriting any future, as the sugar company will be forced to buy from him after all.  But his household is all abuzz about the return of the prodigal daughter, Amal (Faten Hamama), who’s been living abroad for many years, but on the return home, she stops by the sugar cane fields to pay a visit to Ahmed, her childhood friend, where the two exchange pleasantries, recalling old memories they once shared.  But the villagers can also be seen joyously celebrating, paying tribute to Ahmed, with one couple so elated that they plan a marriage celebration, a festive occasion of singing and dancing, with Chahine choreographing a musical number composed by Fouad El-Zahry in what is otherwise a social realist setting.  The arriving boats on the river filled to capacity create an ecstatic mood of utter jubilation, all breaking out into song, singing and chanting a “Song of the Flute” in unison, creating an enraptured celebration.  Amal pays a visit to the bride, the only one in western attire and the only one not wearing a traditional hijab, but secretly can’t take her eyes off Ahmed, asking that he escort her back home, where the two revive their strong feelings, yet remain politely restrained.

The initial merriment turns to misery and gloom when the village is flooded, as the village elder, the blind Islamic Sheikh, rightly suspects the party that has the most to gain, Pasha, and confronts him face to face with the allegations, yet his claim is angrily disputed by Ahmed’s father, Saber (Abdel Waress Assar), who retains a colonialist allegiance to his employer for the past few decades.  Pasha and Riad use this argument to their advantage, stealing Saber’s rifle and then shooting the Sheikh, suggesting Ahmed’s father had a motive, framing him with the rifle and the argument as incriminating evidence, with the entire village turning on Saber.  Ahmed holds out faith in the judicial system, knowing his father is innocent, but he is convicted on the testimony of Hassan (Abdel Ghani Kamar), who helped Riad steal the rifle, and was then paid to fabricate his testimony to place the blame on Saber, who is subsequently imprisoned and sentenced to death by hanging.  Amal is disgusted to learn that Riad is destined to marry her, his just rewards for having bribed her father by carrying out his foul deeds, something she finds insufferable, running away and leaving the family at once, outraged by the reprehensible behavior of her own family, exhibiting a woman’s independence rarely displayed in Arab cinema, collaborating with Ahmed to try and locate Hassan, the only witness who can confirm Saber’s innocence, whose disappearance has been carefully concealed by Pasha.  But when he fails, his father is wrongfully hanged, which comes as a provocative shock to audiences, never before seen in Egyptian cinema, yet it accentuates the blatant corruption of the former regime that Prime Minister Nasser has ousted.  Avenging the family honor, eldest son Selim (Hamdy Gheith) vows to shoot the son of the man who shot his father, with justice resembling an eye for an eye, with Ahmed confronting him in the spirit of brotherhood, claiming they are not enemies, explaining that he needs to track down Hassan, who finally surfaces after the execution, returning to the village, yet Selim awaits Ahmed, shooting him on site, wounding him in the shoulder.  Still he tracks down Hassan and finally shakes some truth out of him, feeling like it comes too late, returning back home where Ahmed collapses in exhaustion, which is how Amal finds him, nursing him back to health.  Chahine again shocks audiences by revealing Ahmed naked from the waist up, still feverish from the bullet wound, with the camera’s male gaze honing in with intense homoerotic scrutiny, setting up the scene before Amal leans in to kiss him on the lips (her first onscreen kiss), a daring and provocative gesture, especially at that time in Egyptian cinema, evidently having the same effect with the two actors who immediately fell in love.  Yet the defining legacy of the film is a final chase scene through the labrythinean ruins of the Karnak temple, featuring stunning cinematography by Ahmed Khorshed, using extremely long shots and high angles in the exotic setting of the historic monuments, as if the Pharaohs and ancient kings were passing judgement upon them.  The melodrama is amped up to the extreme, with near symphonic religious voices chanting on the soundtrack, creating an over-the-top yet stunning work of social consciousness, contrasting modernization and tradition, becoming one of the most popular Egyptian films of the early 50’s.