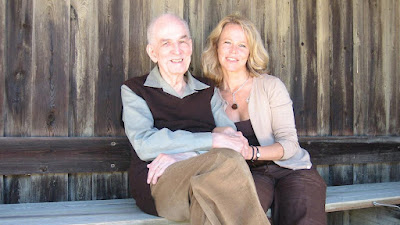 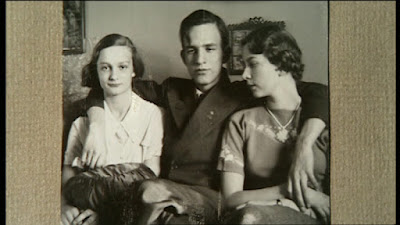 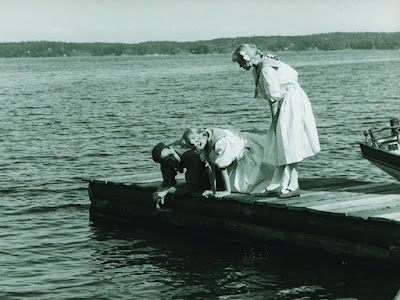 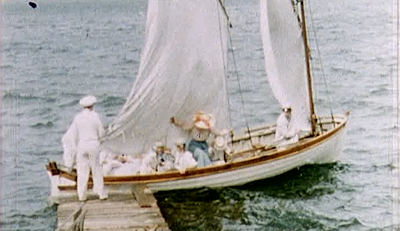 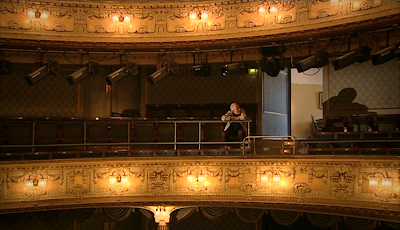 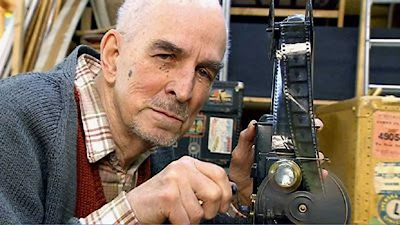 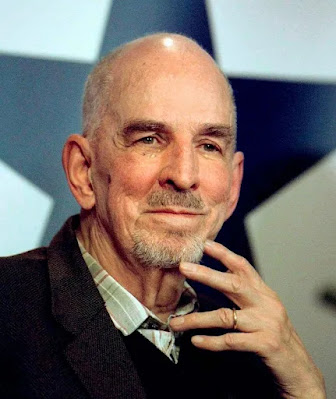 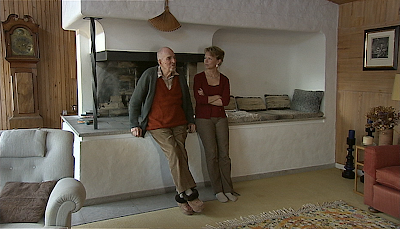 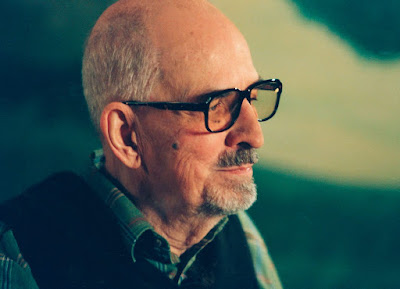 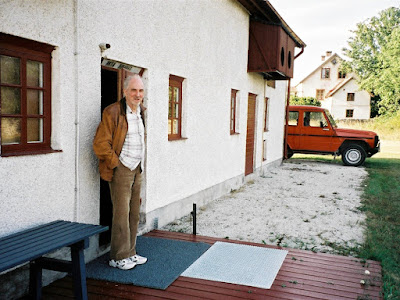 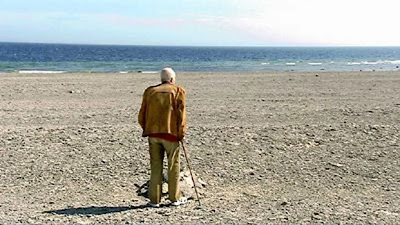 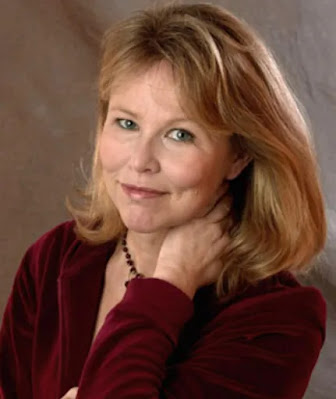 The rarely seen BERGMAN COMPLETE (2004) documentary consists of three 58-minute segments on film, theater, and Fårö Island, including Bergman and Cinema, which starts with FRENZY (1944) and ends with SARABAND (2003), containing unique behind-the-scenes material from Bergman’s private archive, Bergman and Theatre is about some of Bergman’s 125 theatrical stagings and about his delight with the TV medium, with successes such as SCENES FROM A MARRIAGE (1973), while in Bergman and Fårö Island he talks about the childhood that shaped him.  BERGMAN ISLAND (2006), a shortened version released on Criterion in the USA, in collaboration with film festivals and television distributors, is a compilation of all three sections, also part of the special features on the Criterion DVD edition of The Seventh Seal (Det sjunde inseglet) (1957), which can feel poorly edited at times (though Bergman helped make the edited selections), often cutting off vital details, yet the unsurpassed intimacy with this director is revelatory.  Interviewed over several months in 2003 by a longtime friend near the end of his life, Marie Nyreröd, given exclusive access, turns the cameras on Bergman, in his mid-80’s at the time.  Deep, revealing, and full of anecdotes about his work and personal life, Bergman sits mostly in the living room of his Fårö Island home, occasionally moving to a small screening room, critiquing either the focus or the framing, but always comfortable and at ease, reflecting back on significant moments in his life and career, which include at age 8 bartering with his older brother in order to obtain his first film projector, where a candle behind the celluloid was actually lit and the reels had to be advanced with a hand crank.  Bergman recalls mayhem on the set during his first stint as a director in KRIS (1946), where everyone turned against him for his rudeness and screaming (not realizing it was 4 am), where they appealed to Victor Sjöström, venerable Swedish director of silent films and the lead actor in Bergman’s later Wild Strawberries (Smultronstället) (1957), who took the young man aside and taught him etiquette lessons on how to treat people on a movie set.  As they recall his films, it’s interesting to note Bergman’s manner is relaxed, matter of fact, and completely accessible, amazingly lucid and succinct, able to explain his thoughts on complex issues with ease, without an air of pomp or pretension, where over the course of time that we spend with him, we actually come to know this man fairly intimately, including his God, death, marriage and fear issues, his utter lack of being a good father, to acknowledging his fondness for grandfather clocks, where we see a montage of clocks used in Smiles of a Summer Night (Sommarnattens leende), Bergman, Two from the 70's: Cries and Whispers (1972), and FANNY AND ALEXANDER (1982), mixing real life family memories with certain films, as early family photographs resemble the shoreline used in Wild Strawberries (Smultronstället).  He recalls childhood puppet shows that he performed for family and friends, or the highly anticipated festivities associated with Christmas, very much reflected in FANNY AND ALEXANDER, but also the isolation he experienced as a child, where he developed overt fears to nearly all things as well as a deep anxiety about death, which led of course to The Seventh Seal (Det sjunde inseglet) (1957).

Bergman gives us a tour of his beautiful home, some lingering glimpses of home movies showing a progression of beautiful women that graced the screen of his movies, his beloved wife Ingrid, his openly candid confession in his lapses as a father, and a discussion of his demons.  “Not a day has gone by in my life when I haven’t thought about death,” Bergman revealed, suggesting his films can therefore be seen as a product of his struggle with this topic and as his attempt to conquer this fear.  In one of the more surprising revelations, Bergman makes a list of his biggest fears and inner demons, actually writing them on a small piece of paper, and then making a film for every single of one of his fears, carefully reviewing each one of them on camera.  The epithet “demon director” was something Bergman acquired at an early stage in his career, and one that stuck with him throughout his career.  After SARABAND (2003), Bergman retired from the theater and films and retreated to Fårö Island where he never again left the island, acknowledging following a rigid routine, that without it a general disorganization overcomes him, becoming choked up when talking about his wife of 24 years, Ingrid von Rosen, who passed away 8 years ago.  Of his 5 marriages, most averaging about 5 years, Nyreröd asks why this one worked.  He described himself as a man of imagination, whose whims could take him anywhere in the world on the spur of the moment, but her feet remained planted firmly on the ground, a trait he greatly admired and needed.  Nyreröd noted a physical resemblance between his wife and his mother, but it should also be pointed out that early photos of Bergman himself very much resemble his mother.  One of the most interesting questions was about the relationship of Bibi Andersson, his former lover during the making of Persona, and Liv Ullman, his new love after the film.  Asked to describe his feelings in the matter, as archival film is shown of the three of them together during a 1960’s news conference, where they all look in the flush of youth, Bergman was genuinely perplexed and flabbergasted, in short, he never got around to answering that question.  Similarly, Bibi Andersson is fondly recalled throughout this documentary, while Ullman is nearly left out altogether, only featured twice, once in SCENES FROM A MARRIAGE (1973) when her husband cruelly announces he is leaving her, and again in Persona when her barefoot character steps on a piece of glass that has been precisely left there by Andersson.

While the film is a journey of more than sixty years devoted to film, plays, and television programs, amusingly claiming he left puberty when he was 58, the works he was most proud to have made were Persona (1966) and Bergman, Two from the 70's: Cries and Whispers (1972), noting that he believed he altered the cinema landscape with those films and that he went about as far as he could go within himself.  Despite his international standing as one of the greatest film directors, knowing that his theatrical productions would receive much less attention than his films, he feels more proud of his accomplishments in the theater, which was his childhood ambition, having directed over 150 plays to perhaps 60 films.  Bergman designed or added input to most of his own stage sets and was painfully aware of how different the two art forms are and how time consuming being the director of a theatrical company can be, confessing that accepting a position actually cost him one of his marriages.   But he managed to balance his life around both art forms, filming mostly in the summer, using his theatrical ensemble for his films as well.  We see Bergman staring down at an empty stage from the most distant, highest level seats in the Royal Dramatic Theater in Stockholm, which he one time headed and where he maintained an office for nearly forty years, revealing telling comments about how powerful the silence of an empty stage is, or we hear the difficulties he encountered directing Strindberg plays in German language, claiming Strindberg has the most beautiful use of the Swedish language, that despite his German language proficiency, words alone can’t translate this meaning, which is an accumulation of cultural experiences that are nonexistent in Germany.  Bergman discovered Strindberg at age 14 and early on purchased a prized collection of his entire works, maintaining a spiritual kinship with him throughout his life, restaging some of the same Strindberg plays as many as four different times in his career.

Even though the film runs 3 hours, it barely skims the surface of much of his work and one could easily have watched 3 more.  Bergman was a bad husband with numerous and overlapping love affairs, who acted on his artistic impulses, yet he craved the recluse isolation of an island with less than 500 full-time residents, no school, no post office, no doctor’s office, but does have a supermarket and a church, having built a Scandinavian-style, architect-designed house in 1967, yet his desire now was to be alone, in silence with his internal “demons.”  While his father was a pastor in the Lutheran church, he was raised in the company of women, by his mother, Karin, naturally, but also a fond maternal grandmother, with her immense apartment in Uppsala, where among the most striking aspects of his art is the prominence he gave to women in his films.  In the company of Nyreröd, one of his closest friends, he engages in an easy conversational style, as she offers a warm and affectionate look at a guy most closely associated with gloom and doom, yet what she reveals is a shared intimacy from this accomplished director who lovingly shows us works of art, locations, theaters, and photographs, while at the end he reveals that the one fear he never had was the dread of nothingness, drawing an empty blank in his head, which is quite simply when the creativity of your imagination abandons you, when things get totally silent, totally empty, and there’s nothing there.  But he does share moments from his home projection room where he continues to watch movies every day, showing us a brief clip from PRIVATE CONFESSIONS (1996) – – yes, it was directed by Liv Ullman, but written by Bergman, where Max von Sydow plays a priest who elaborates on the holiness of man’s spiritual quest for knowledge and the meaning of life through the arts, drawing from theater, painting, music, literature and philosophy, constantly probing the deepest concerns of humanity, that even in the absence of a God qualifies as a human expression of God’s intent.  Mostly, BERGMAN ISLAND is an embracing, heartfelt film which offers a rare opportunity to get this close to a man who has profoundly affected so many others, who speaks here in everyday, ordinary terms, contrasting our notion of what has typically been described as Bergmanesque.  Publicity has never been his strong suit, so if you want self-revelation from Bergman, you must involve yourself in his works.  As a portrait of an artist as an old man, one already knows this man’s life will reverberate well beyond our lifetimes, so it’s simply extraordinary to get such an intimate glimpse of him before he died.