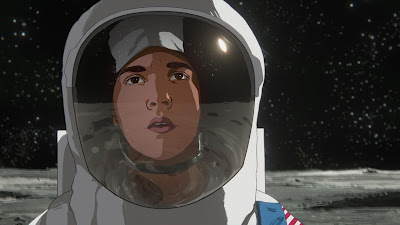 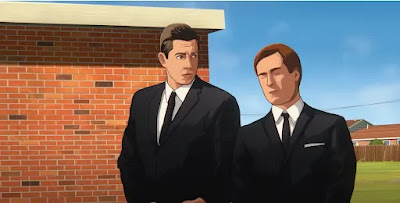 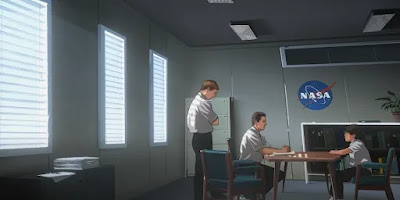 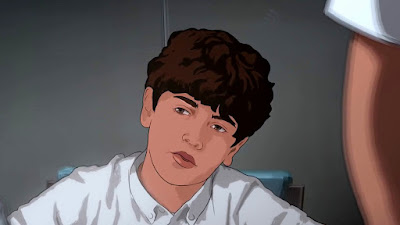 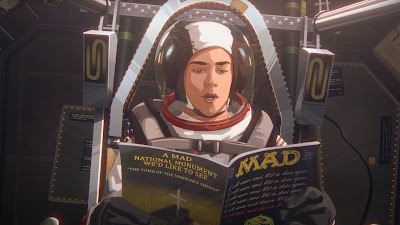 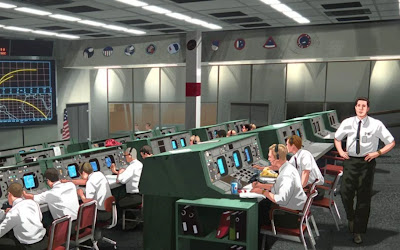 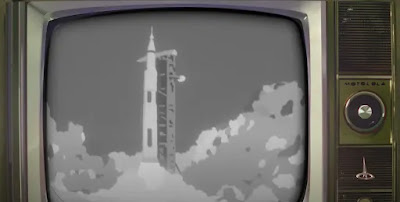 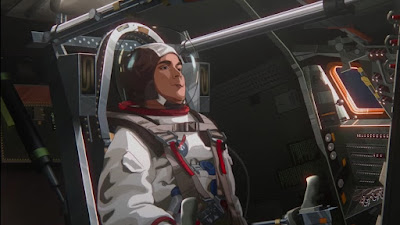 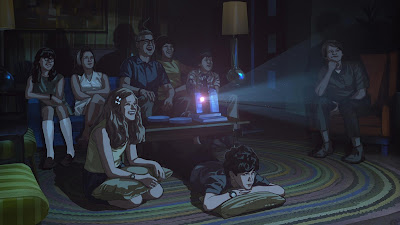 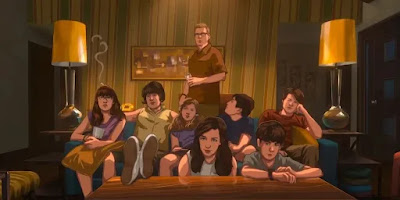 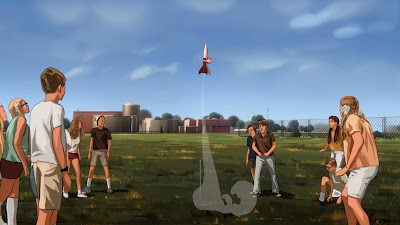 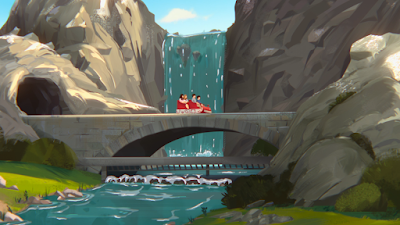 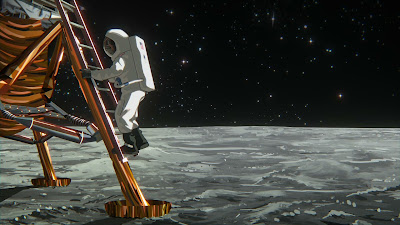 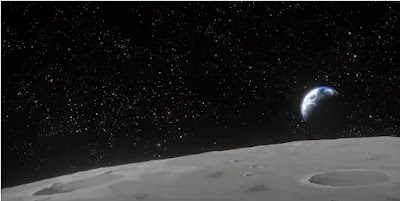 You know how memory works, even if he was asleep, he’ll someday think he saw it all.     —Mom (Lee Eddy), to her husband after their son fell asleep during the moon landing

Few directors understand the thought process of kids better than Austin director Richard Linklater, whose films like Dazed and Confused (1993), 2014 Top Ten List #1 Boyhood, or even Everybody Wants Some !! (2016) feel like anthems to childhood, giving audiences a chance to just hang out with a typical ragtag group of kids that may remind you of your own childhood experiences, bringing the musical soundtrack center stage, a remembrance of what we were listening to back in the day.  This, on the other hand, is an animated quasi-autobiographical story about growing up in a suburb just outside of Houston in the late 60’s, where everything revolved around NASA, established in the late 50’s, becoming one of the state’s largest employers with 8000 employees and an annual budget of $100 million.  Today, however, it employs more than 50,000 with a budget closer to $5 billion, ranking #12 on Forbes list of America’s Best Large Employers for 2021 (NASA ranks in top 25 of Forbes 'America's Best Large ... - Chron), with more than a million people each year visiting the Houston Space Center.  The key to this film is the folksy narration by Jack Black (whose mother actually worked for NASA), which comprises the majority of the film, weaving together childhood memories, offering an amusing context of what it was like growing up in a neighborhood surrounded by other NASA families, as living there “was like being where science fiction was coming to life,” yet it’s all told like a bedtime story, or an even younger version of The Wonder Years (1988-93).  It’s extremely rare for an animated movie to also be a period piece, a love letter to a lost era and a rather astonishing memory play, like a diary or scrapbook of the time, yet what distinguishes this film is the clever attention to details, which couldn’t be more accurate to the times it depicts, with Linklater as screenwriter recalling his own nostalgic upbringing, told with an enthusiastically cheerful style, actually conveying a childlike sense of wonder.  Returning to the playful animated style of WAKING LIFE (2001) and A SCANNER DARKLY (2006), comical and often absurd references told through an existential reference point, this film takes us back to a more innocent time, breaking ground in the suburbs, an experimental new style of living that becomes all the rage in America, tract housing for communities that are almost entirely white, offering amusing anecdotes in a playful style, using edgy 60’s music to match the humor, mixing dreamlike reveries into a classical coming-of-age experience that is mostly a delight from start to finish.  Taking us back to 4th grade, in between incidents of severe school punishment, as back in those days it was still all right to paddle kids with brutality, Stan (voiced by Milo Coy), claims it all happened during a dodgeball game, as two men in suits showed up, Bostick (Glen Powell) and Kranz (Zachary Levi), taking him aside to offer him a chance to be an astronaut, as by some happenstance mishap the initial space capsule was built too small, where only a child could fit, so they were impressed by his science reports and his physical fitness, thinking he would make an ideal candidate.  Without thinking too hard he agrees, not realizing what he’s signed up for, as it’s a top secret mission, unable to tell his friends or family, with the mission taking place during summer camp, with NASA providing all the fake photographs sent to his family of his supposed experience in the northern woods of Michigan, but he would actually be going through extensive training for his first space flight to the moon.

Taking a lengthy aside, we quickly realize this is a film devoted to capturing a place in time, like a modern era version of Our Town (1940), as the narrator proceeds to tell us about his childhood experiences growing up with his family in Texas, where his Dad works for NASA, but doesn’t have one of those sexy or glamorous jobs, much to his son’s chagrin, as that’s all he can think about, being an astronaut, completely surrounded by Astro-dominated themes in local businesses, from hamburger and hot dog shops to bowling alleys to theme parks, including the mammoth Astrodome where they play baseball, the first stadium to play on AstroTurf, with a giant exploding scoreboard that shoots off pistol fire with every home run, the kinds of things that would capture a young boy’s imagination.  The youngest of six siblings, he leads a charmed life, where blacks and hippies seen on the street from their car are gawked at like specimens in a zoo, outsiders that are completely outside their normal experience, where they only hear about them from afar.  The family life revolves around the television, developing peculiar family viewing habits, while recalling all those old 60’s television shows, running home after school to watch Dark Shadows, with Twilight Zone coming on late at night, often falling asleep before the national anthem plays, signing off for the night (unthinkable today with 24/hour marathon television coverage), while on weekends they could check out the sci fi/monster movies playing at the local theater that reflected the paranoia craze from nuclear fall-out with mutant radioactive monsters.  Of course, listening to his sister’s record collection was fun, while setting off fireworks was a big thing in his neighborhood, where there was always a local pyrotechnic setting off rockets, even creating a capsule and putting a live grasshopper inside.  Among their most favorite activities was piling into the back of a pick-up truck, with no regard for personal safety, and heading for the beach in Galveston, with his Dad chugging down beers, which was not against the law at the time, recalling wiping the tar off their feet from oil spill pollution embedded into the sand.  Because the housing development was built on flat land, it tended to flood during heavy rains, causing sewer back-up and standing water, ideal conditions for breeding mosquitos, generating another favorite past-time, riding bikes through the fumes behind the pest control truck spraying DDT insecticide throughout the neighborhood to wipe out a potential mosquito-infestation, knowing nothing at the time about its toxic impact on humans as well.  Yet nothing was more fun than a trip to Astroworld, which was a Texas version of a Disneyland theme park, with scary rides, splash drops, shooting galleries, Double Ferris wheels, an encounter with the Abominable Snowman, and just a million fun things to do, while the accompanying musical soundtrack is simply extraordinary, always a highlight, and one of the most pleasantly rewarding aspects of any Richard Linklater film, APOLLO 10 ½: A SPACE AGE CHILDHOOD - Movie Soundtrack on Spotify.

Tommy Pallotta is the head of animation on all three Linklater animated films, each one using the Max Fleischer rotoscope technique responsible for the Betty Boop and Popeye cartoons, but he uses a somewhat different method here, animating over live-action footage, photographs, or television broadcasts, including the historic Walter Cronkite broadcasts of the Apollo 11 moon mission on live CBS television during the summer of 1969, with astute commentary provided by his sidekick Eric Sevareid, a war correspondent turned television journalist who offered opinion and analysis.  Changing the focus to actual historical events gives the film a more starkly realistic look, with television providing recurring war footage on a daily basis, reminding viewers of the grim body count of tragic American lives lost in Vietnam, also offering views of blacks in Harlem expressing their viewpoint that the millions of dollars spent on a moon landing is wasted, as it could be put to better use by helping poor people in America who were struggling on a daily basis to make ends meet.  With NASA employing less than 4% blacks, and no presence of minorities in their own schools, what’s noteworthy is that from the protected vantage point of the Houston suburbs, those events couldn’t be more distant and alien to their own lives, “confined to television,” as Stan puts it, while the NASA launch was shown in their classrooms at school, with students discussing the significance of space exploration, including suggestions that it may actually become such an everyday occurrence that in a few years people might even be living in outer space, while many felt space would be the great unifier, bringing the world together, perhaps epitomized by the first photo of a blue earth as seen from space.  From a child’s imagination, it’s easy to see how realistic news stories might be tuned out, while dreams of interplanetary space exploration was so much more fascinating, heavily influenced by Stanley Kubrick’s 2001: A Space Odyssey (1968), interjecting Stan’s own space fantasy happening simultaneously to the Apollo mission.  What this suggests is that at least for this generation of kids, they were less concerned about war, poverty, and budget constraints and much more thrilled imagining what it would be like to be an astronaut, which would suddenly be listed high among what they might aspire to be.  Among the more hilarious scenes is watching Stan enthusiastically talk about the sublime qualities of Kubrick’s futuristic film in front of several disinterested friends who couldn’t care less, showing a really good grasp of what the film is about, especially for a ten-year old, considering most adults couldn’t figure it out, clearly suggesting the kid was a budding filmmaker.  A cantankerous grandma offers a humorous counterpoint, a complete opposite from the one who keeps taking them to see THE SOUND OF MUSIC (1965) and feeding them treats, as this one feeds them conspiracy theories, like JFK is not really dead, instead he’s a vegetable living on a Greek island owned by Aristotle Onassis, which explains why Jackie married him, or how overpopulation will leave people without sufficient food to eat, leading to mass starvation and famine, while the space race itself led to broad speculation about how nuclear war could devastate the planet, with the duck-and-cover school drills (How 'Duck-and-Cover' Drills Channeled America's Cold War ...) offering a ridiculous defense against toxic radioactivity.  When it comes time for the men to actually walk on the moon, Stan pretty much sleeps through it, exhausted from spending his day at Astroworld, where it seemed to take forever sitting in front of the television to get to that point, continually prolonging the main event with endless talk about things not even shown, described by his sister as “endlessly boring,” though in his own dreams he imagines himself doing his own moon walk, which in the end, seems to be all that really matters.