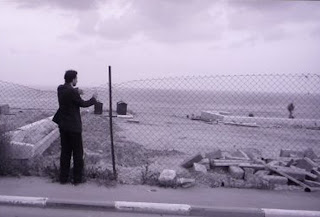 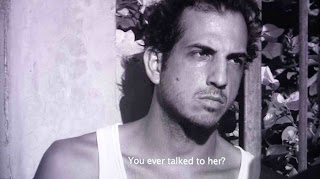 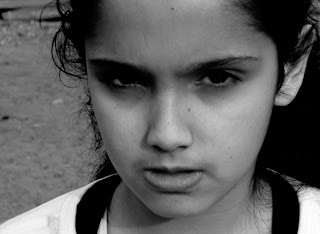 DISSOLUTION  (Hitparkut)                           D
Israel  (88 mi)  2010  d:  Nina Menkes
While it’s immediately clear we’re in Dostoyevsky Crime and Punishment territory, shot in Black and White in long, static shots that could easily be mistaken for Béla Tarr or the marginalized territory of Pedro Costa, where the protagonist (Didi Fire) is a man of few words, and fewer friends, as he’s seen having a difficult conversation with an associate who makes him repeat what he’s trying to say, suggesting the possibility of ghosts exist, and not just because only sick people can see them, but perhaps because only in that weakened state are they allowed to be seen.  He then gets in a quick confrontation trying to avoid his landlord, has an eerie visit with a pawnbroker where he continually asks inappropriately personal questions, and also buys the cheapest meat possible from the butcher, which turns out to be cow lungs, which we see him cook up, a truly gross display of what is presumed inedible.  Shot in Israel in a mixed race neighborhood of Tel Aviv called Yafo where Arabs and Jews contentiously live side by side, where no one seems to like one another, as expressed with a car that continues to chase after Didi throughout the movie, where he’s continually seen running away.  Menkes shoots Didi in long darkened shots laying in his bed, which his landlord calls a tomb, for long periods of time, or we see him off to the side of the screen, sitting in a bar where pieces of light intermingle with the shadows, where another unidentified figure sits prominently in the center of the picture drinking alone and smoking a cigarette.  This oppressive sense of isolation is potent, especially when we see him return to the home of the pawnbroker, where we know what happens through offscreen sound, and later a pool of blood can be seen as he peruses through her personal belongings.
Senseless murder is one thing, but this film attempts to deal with the haunting aftereffects, as if Didi is somehow punishing himself for his crime.  But there’s little evidence of this, as the mood is simply too detached, and nonprofessional Didi shows just as little afterwards as he did prior to the event, so for all practical purposes, there’s a disinterest that permeates all throughout this film.  There’s no emotional connection anywhere to be found, no underlying motivation to kill the pawnbroker, and no conceivable punishment harsh enough to fit the crime, as instead he spends his time in a self-imposed solitary confinement cut off from the rest of the world around him.  But that’s exactly as he was living beforehand, so what’s changed?  Does he become unhinged, more restlessly anxious, or panic with guilt?  The answer is no he doesn’t.  Instead the portrait is one of disconnection and alienation with the world, and not through any social stigma such as poverty or lack of education, but simply a man who is completely disconnected with himself and can find no meaning in the world.  Unfortunately, throughout the film there’s little movement, nothing to pull the audience into this picture, instead there’s a stifling stillness, as there is little evidence of trauma or psychosis, and only a scant few flashbacks or hallucination sequences showing a surrealistic or altered view of the world.  There is an intriguing final image, but everything suggests people can’t wait to get away from this man fast enough, where the impression is one of a different kind of emptiness, as his dull malaise leaves the audience wondering why they should show the slightest interest.  Dostoevsky is meant to be brooding and melancholy, miserablist even, and darkly disturbing, but this film proves the dramatic power of literature does not always transfer to the screen.
Posted by Robert Kennedy at 3:34 PM