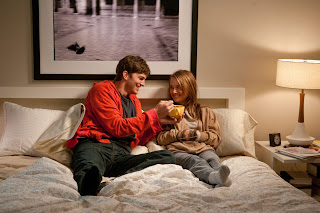 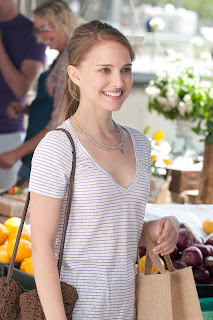 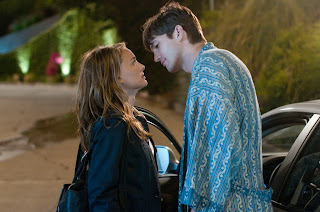 NO STRINGS ATTACHED                           C+
USA   (110 mi)  2011  d:  Ivan Reitman
If we were in a relationship, I'd become a weird, scary version of myself.    —Emma (Natalie Portman)
I suppose a lot of what you get out of a movie like this depends on what you bring into the theater with you, such as preconceived notions.  Certainly the draw here is seeing Natalie Portman lower herself to this dreck, where she’s actually named as a producer and beaming with a smile on her face, actually looking happy right on the heels of her Academy Award nominating role which couldn’t have been more dramatically challenging in the psychic horror thriller BLACK SWAN (2010) where she took a deep descent into madness.   Having low expectations is the key to enjoying a movie like this, after all, it’s directed by the guy who made GHOSTBUSTERS (1984) more than 25 years ago, which was cheesy even then - - so if you get a little something to enjoy, be grateful.  I still remember sex columnist Dan Savage’s infatuation with teen throb Ashton Kutcher wearing whities, so don’t expect much else out of a guy who’s more a Hollywood celebrity than an actor, accurately described in the film as annoyingly happy.  If the entire plot feels borrowed from a Friends TV sitcom episode where Natalie Portman’s role is interchangeable with Jennifer Aniston, well perhaps it is.  The jury is still out on whether Natalie Portman can carry a film alone, as she is surrounded by a sizable secondary cast which keeps popping their heads in and out of the picture, usually for comic relief in order to keep re-energizing the film with easy laughs.  There’s not much doubt that this is another formulaic film, but one wonders if Portman’s presence will add anything different, like Jodie Foster or Julia Stiles, young attractive women who also brought an edge of smartness and strength to their roles.  I suppose playing opposite Kutchner tells us all we need to know, as he continues to be a grown up adolescent, and he ends up being the responsible one in their relationship.
Kutchner and Portman initially grow attracted as sex buddies, where due to Portman’s hectic schedule working at a hospital she simply has no time for dates and small talk, preferring a few moments in the sack until it’s time to go back to work again.  Kutchner plays along, thinking this is any guy’s dream, but he soon wants more out of it, and he’s not afraid to say so.  Portman on the other hand has an aversion to cuddling and commitment, thinking somebody always gets hurt, so she avoids all the small stuff.  Of course, this plays out in obvious fashion, where initially there’s a rush of sexual attraction and interest.  One of the things the film does best is express this candidly through cell phones, gossip, and the Internet age, so soon all their friends who weren’t supposed to know have heard all about it.  They’re the talk of the town, as they seem so grown up about a relationship without emotional attachments, except they get disturbed at the thought of their so-called partner seeing someone else.  So it’s a little more complicated than they let on.  When they have a falling out, the energy sags and the film sinks, where in no time at all we have nearly forgotten what we liked about this film.  Thoroughly predictable, the secondary characters are terrific, especially Portman’s roommate Greta Gerwig, also Kutcher’s buddy Ludacris, who themselves feel like a couple with possibilities.  This is a breezy, light-hearted romantic comedy that accentuates the lifestyles of the rich and the famous, and being single, where people are rarely if ever seen at work, but the focus is on all the fun and extracurricular activities in their lives, as if the audience can re-live their youth vicariously through this virtual reality world where relationships require no commitment whatsoever.  That premise is intriguing, but this is Hollywood, where artifice reigns supreme, so girls aren’t allowed to have fun and be in love without first recognizing the error of their ways and quickly correcting it, showing maturity, wisdom, and of course, providing the moral of the story.
Posted by Robert Kennedy at 2:23 PM