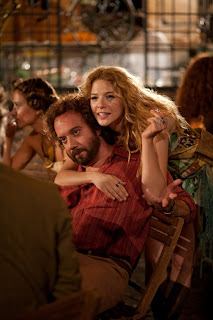 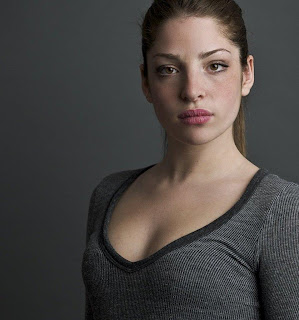 BARNEY’S VERSION                                               C
USA  (132 mi)  2010  d:  Richard J. Lewis
An erratic and horribly uneven version of the vulgar and boisterous life of Barney (Paul Giamatti), loosely based on the Mordecai Richler novel, who also provided the original source material for the esteemed Canadian film about growing up in Montreal as a Jewish teenager in THE APPRENTICESHIP OF DUDDY KRAVITZ (1974), starring a very young Richard Dreyfuss.  They play out as bookends in the author’s life, where Kravitz was a bundle of nervous energy, a smart and overly ambitious  kid who would stoop to anything to make an extra buck, while Barney has already discovered financial success by producing the long-running, yet brainless and sleazy television soap opera O’Malley of the North that resembles Russ Meyer without the sex and nudity.  The performances are excellent, but there's something missing in the tone of the story where the witty sarcasm of the book does not translate well onto the screen.  While it should be this sprawling uproariously funny work, it's instead a fidgety affair with only intermittent humor, much of it way over the top in Jewish stereotype.  Never as nuanced as a Barry Levinson film, the premise is a bit outrageous, where at his second marriage (his first wife committed suicide) he goes existentialist at his own ridiculously exorbitant Jewish wedding to Minnie Driver, which seemingly goes on forever, wandering around as if in an alcoholic daze questioning the meaning of it all, until he sets his eyes on Rosamund Pike, which alters his life forever, immediately falling head over heels for her and telling her so, which is not exactly in good taste at one’s own wedding.  How about waiting a week?  So while that’s the real issue, Barney and his equally candid father, Dustin Hoffman, are portrayed as more uncivilized lower class Jews, not in the same financial bracket as Driver and her ostentatiously rich father, so there’s a wedge between them from the beginning.
The two don’t appear destined to spend the rest of their lives together and are aided by a miniature side story, which is a film in itself.  Barney’s best man at the wedding is a real loutishly off-color character, Boogie Moscovitch (Scott Speedman), think Thomas Haden Church in SIDEWAYS (2004), a guy that taught Barney everything he knows, his carnal conscience, who’s always high on some illegal substance, eventually becoming a junky that Barney intends to help sober up, inviting him to the summer home, a cabin on a lake, where in a wrong turn somewhere, has sex with Minnie Driver, paving the way for the intended divorce.  But that’s only half the story, as after Driver leaves in hysterics running back to Daddy, Barney has a drunken tête a tête with his friend, which also includes ill-advised playful gestures with a loaded gun.  What happens afterwards is lost in a drunken stupor, or so it seems, as Boogie has disappeared, perhaps shot by Barney, where the police are called sometime after Barney sobers up and drag the lake but can’t find a body.  Barney quickly moves on after this incident, but it stays with him for the rest of his life, where perhaps only he knows what really happened, or more likely, the trauma wiped out whatever did take place from his memory banks.
Barney wastes no time rediscovering Pike, who he’s been pursuing all along, and who’s rather flattered at the gesture.  And what’s not to like, especially considering he’s an obnoxious, insecure, cigar-smoking alcoholic with a flair for bad taste, and the film does a few time alterations, jumping ahead to when they’re already married with grown children before moving back to early childhood again, where she sacrifices her budding career in the radio business to become a mother of two children.  They appear happily married and content, where she is “the one” for him, but he drinks too much and indulges in only what he wants, like insulting her friends and watching hockey games in bars, leaving her feeling less than satisfied, so when a good looking guy shows up around the lake (Bruce Greenwood), a guy already working in the radio business, Pike gets the urge to return to work, with this new guy, of course.  Barney’s life spirals all out of control, initially suspecting something’s up before he makes a stupid decision on a drunken binge, literally driving her into his arms.  Like the sexual incident in his earlier marriage, Pike uses this for all it’s worth, even having the kids gang up against him, ultimately moving in with the hunk in the radio business, something Barney unfortunately can’t even remember, as he has early onset of Alzheimer’s Disease and continues to believe they’re happily married.  It’s a tragic story of lost opportunities, told with plenty of gusto by a first person narrator who may be known for embellishing as he looks back on his life, suggesting there’s also plenty to be grateful for.  Anna Hopkins as his daughter makes a terrific screen appearance, while brief cameos of Canadian filmmakers Denys Arcand (as the erudite waiter), not to mention Atom Egoyan and David Cronenberg (as TV directors) grace the screen.
Posted by Robert Kennedy at 12:57 AM