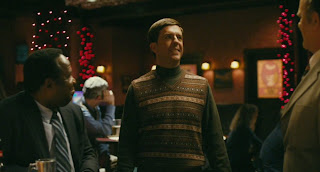 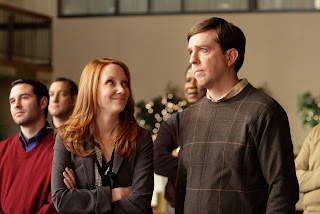 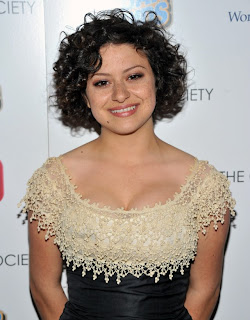 The title is a little misleading, as despite the supposed Iowa location, most of the characters come from other Midwest states like Wisconsin, Minnesota and even Nebraska, while the film itself was shot entirely in the state of Michigan.  While it’s not easy to wrap yourself around the semi-comatose happenings of a small town insurance convention, probably no place on earth one would rather not be, yet for all its attention to Midwestern detail, this film starts extremely slow but eventually finds a tailwind of crude comedy that’s actually pretty funny.  Ed Helms is perfectly cast as the ultra ordinary and socially awkward Tim Lippe, a conservative and near invisible mid 30’s insurance man covering the farm towns of Brown Valley, Wisconsin, a place where the world changes at a glacial pace, and where Tim’s once-a-week “pre-engagement” girlfriend is none other than his 7th grade science teacher (Sigourney Weaver).  After the strange death of their leading sales rep, the boss sends Tim to win the company’s coveted 2-Diamond Award, which they’ve won three years running, though Tim is strangely apprehensive, thinking the world is suddenly moving too fast.  His boss has confidence in him, but places extra pressure on him as he expects results.  Honestly, there’s nothing at this point to suggest it’d be a good idea to remain in the theater unless perhaps you’re Amish and you skipped school to see it.  But it’d be worth your patience.

With little fanfare, Tim boards a plane for the first time in his life and heads for a thriving big city metropolis where he immediately lands in insurance convention nirvana, a place he describes as Barbados once he sees his first indoor swimming pool.  In order to save costs, he’s got two roommates, one is probably the first black man he’s even seen, Isiah Whitlock Jr. as Ronald, a polished, smooth talker whose voice alone has the calming assurance of a radio host, and finally, in a stroke of excessively bad taste, John C. Reilly as “Deanzie” Ziegler is the most obnoxious man on the planet and a man his boss specifically warned him to avoid, a guy who guzzles free booze like it’s candy and unleashes a barrage of crude, sexually offensive remarks that you can’t believe you just heard, turning everything into sexual innuendo, as if he’s an older and less successful version of one of Saturday Night Live’s “wild and crazy” guys, Steve Martin and Dan Aykroyd as the world’s worst pickup artists on the loose.  And in perhaps her best role ever is Anne Heche, nearly unrecognizable as Joan, an outgoing girl, her married inhibitions unleashed as she’s out of town, who just wants to be one of the guys, except she’s flirtatious as hell.  Once the players have been introduced, they start drinking and loosening up (and did I mention there’s a scavenger hunt?), where little by little their inner souls, locked in a vice grip of their own hard corps conventionality, struggle to become liberated.  Major conflicts ensue.

After leading the audience exactly where they think this is going, writer Phil Johnston sends them on an express train veering out of control, where Reilly’s humor actually becomes hysterical and the straight-laced Ed Helms becomes the bon vivant man about town, where his heartfelt earnestness turns him into a chick magnet, which all but knocks playboy Ziegler off his feet in admiration, immediately declaring him a best friend for life, even if he just got to know him.  The zaniness is crude, but appealing, as by the end of this picture, despite a series of setbacks and moments of extreme anguish and despair, a man constantly challenged by unforeseen forces, the perennially uptight Helms will try just about anything, as he’s at the end of his rope, yet his inner self is basically so admirable that the fun is seeing him get mixed up on a road journey with lowlifes and swindlers, all thinking he’s easy pickings, as he has to somehow navigate his way through this moral purgatory of lost souls.  It’s no less than a WIZARD OF OZ (1939) journey, as our everyman hero, with the help of his friends, is forced through his adventures, which include a rollicking ride with a friendly convention prostitute (Alia Shawkat), to re-evaluate what really matters in his own life and damn if there’s not a surge of Capra-esque emotion by the end of this picture—remarkable that something that started so predictably lame became so irreverently enjoyable by the end, continuing the bad jokes even over the end credits.
Posted by Robert Kennedy at 11:40 PM