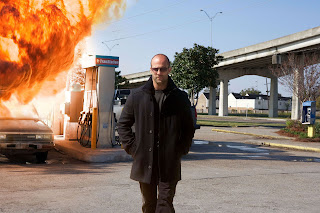 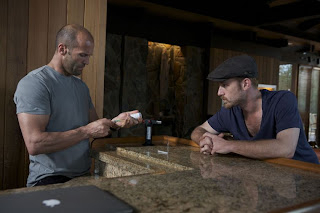 THE MECHANIC                                          C
USA  (93 mi)  2011  'Scope  d:  Simon West
You know, I’ve always had a soft spot for Charles Bronson, a guy with a tough looking face who always had a gentle side that usually covered up his ferocious behavior, noted for his break out role as a Bohemian beach bum with a thing for Elizabeth Taylor in THE SANDPIPER (1965), and for his superb performances as a mysterious stranger in Sergio Leone’s ONCE UPON A TIME IN THE WEST (1968), as a U.S. Army special investigator who travels to France in search of a rapist, developing an attachment with a beautiful young woman in the romantic psychological thriller RIDER ON THE RAIN (1970), and as a charming but mythical outlaw in an underrated western with a startlingly original storyline in FROM NOON TILL THREE (1976).  Bronson, however, was prone to type, and with his tough guy image ended up being type cast to death, all but ruining his career, as he repeated the exact same role over and over again, such as the lone vigilante Paul Kersey in five DEATH WISH movies over a span of 20 years.  But the early 70’s were some of Bronson’s best years, as he exuded confidence and a seasoned maturity, no more so than as a highly specialized mob hit man in THE MECHANIC (1972).  In the role of Arthur Bishop, he takes an apprentice under his wing, Jan-Michael Vincent, who appears eager to learn the skills of the trade, but in the end there is an obligatory double cross.  Nearly thirty years later, the film is being remade, using the same title, but with Jason Stratham in the Bronson role of Arthur Bishop, the cool, consummate professional whose operations are so meticulously planned out, no one even knows he was there, as evidenced by an opening sequence where a drug kingpin is killed while swimming in his own pool undetected by watchful security guards, as all the action takes place underneath while the surface shows nothing drawing anyone’s attention.  When Bishop gets back to his remote glass house somewhere in the bayou of Louisiana, for relaxation he pulls out a record of the highly distinctive Schubert Piano Trio Andante movement made famous in Kubrick’s BARRY LYNDON (1975).
Donald Sutherland in a wheelchair makes a brief appearance as Bishop’s friend and longtime superior, before himself becoming the subject of the next hit, something about a plan going awry in South Africa where several highly trained men ended up dead.  Enter Ben Foster as Sutherland’s volatile, hot-tempered son vowing revenge, a younger kid who seems to screw up everything he touches, so Bishop takes him under his wing and attempts to teach him to channel those emotions rather than be driven by them.  While Foster immediately picks up on the adrenaline of the action, and is a rush of energy himself, his scenes careen out of control because he can’t follow the plan and instead creates a bloody catastrophe with every hit.  The two end up in Chicago where we see them scale high rise buildings and leap from dangerous rooftops, making it all look easy, though we never see any training for this kind of operation.  In the Bronson film, there would be word interplay between the two characters, as Bronson always has a screen personality, but these two have little to say to one another and speak through action scenes where they have to develop a trust with one another.  The film does move with a brisk pace, and the Hollywood action sequences are well designed and deliver the necessary tension, however, as predicted, due to Foster’s presence, their work starts to look very messy, making business look bad, drawing the attention of the superiors, as this is certainly the exact opposite of the victims never knowing a hit man was there.  What follows is Foster gets a hint that Bishop may have been involved in his father’s killing, while at the same time Bishop gets a hint that Sutherland was used as a fall guy and never deserved to be killed.  With this kind of toxic information flying through the air, none of it communicated to one another, the stage is set for a final climax sequence which is highly charged and explosive, but differs quite substantially from the original, which was much more daring than the ending here, which actually has a MAD MAX (1979) feel to it, as if the world out there is nothing but a wasteland.
Posted by Robert Kennedy at 1:01 AM