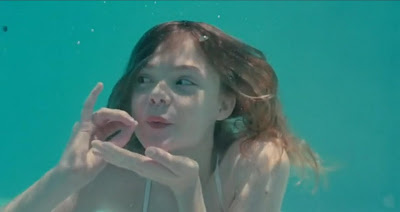 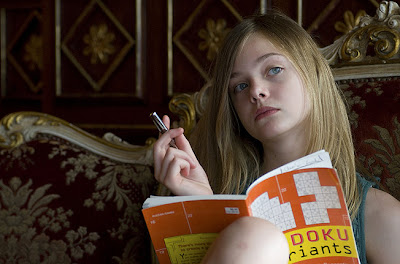 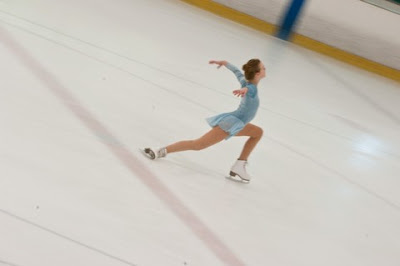 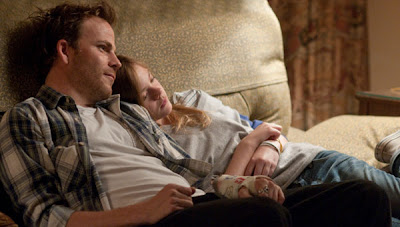 Feeling very much like an autobiographical work, this quirky expressionistic portrait of aimless characters drifting through the superficiality and ennui of the ultra rich resonates with the director, whose millionaire parents had separation issues during the middle of her childhood sending her into an emotional free for all.  From being cast as Candy Darling in I SHOT ANDY WARHOL (1996), Stephen Dorff shows up here as Johnny Marco, a man who supposedly has everything money can buy, but hasn’t a clue how to find love.  Instead he lives in an upscale luxury hotel, Chateau Marmont of West Hollywood, and pays pole dancers to entertain him whenever he’s bored, or drops into the rooms of seductive single women who give him that look of availability and interest.  Driving a late model Ferrari, he is accustomed to getting what he wants.  When we get a glimpse behind the veneer, however, we discover his life is really empty and rather pathetic.

When his 11-year old daughter Cleo (Elle Fanning) drops by, they play video games together or sit around the pool while the soundtrack plays The Strokes - I'll Try Anything Once (3:18) that includes an underwater sequence where they pretend to have a tea party, or swim in the pool in their own private suite, but he barely knows her, not even realizing she’s been taking ice-skating lessons for the past three years, seen skating beautifully to Gwen Stefani’s “Cool,” becoming a graceful and attractive young woman.  This reminded me of the opening of John Cassavetes’ Love Streams (1984), where Cassavetes was sleeping with an entire household of call girls while regularly drinking multiple bottles of champagne every day, leading a life of alcoholism and debauchery, taking responsibility for no one, not even himself, none of which brings him anywhere close to being in love.  For the most part, this is the theme of the film, as Johnny is a self-indulgent movie star who lives the part of a playboy with women throwing themselves at him, and these short term flings constitute his life.  While not exactly flamboyant, it’s indulgent as hell, leaving gaping holes where his reality should be.

Cleo, however, is adorable the way she skips from room to room, fixes him breakfast in the mornings, twirls around performing ballet swirls, and is generally a smart, well adjusted girl who’s also used to having everything handed to her and getting whatever she wants.  She’s sweet natured and fun to be around, but she falls apart when her mom inexplicably dumps her on Johnny’s doorstep and never indicates when or if she’s coming back.  So he takes her to Italy with him for a press junket promoting a movie, where they fly first class and get transported by a police escorted stretch limousine while receiving luxury accommodations in the finest hotels.  You’d think this would be the life, any kid’s dream, but this so much resembles the sheltered life that she’s used to that it quickly gets tiring, almost immediately retreating back home.  When Johnny takes her in a helicopter ride after a night playing craps in Las Vegas where they meet a waiting taxicab to take her to summer camp, it borders on the ridiculous.  Some kids just have all the advantages.

Largely a plotless melancholic mood piece that is a breakout role for Elle Fanning, it’s like her coming out party, as her fresh energy really carries the film.  While many will call this a trifle, not really about anything, reality light, or we should have such problems, but Coppola has a deft hand interspersing small moments of realism with her own sense of experimentation and pitch perfect Indie music that really does feel unique, as her use of music is simply outstanding.  The film is pretty much what we see in the two-minute trailer sequence, which is remarkably inventive and features the best songs from the film.  The ensemble acting is genuine, with Chris Pontius as Johnny’s lifelong friend really standing out, feeling very much like improvised scenes, while the measured camerawork by Harris Savides creates an intimate warmth with each character, but the icing on the cake remains the exquisitely chosen musical selections and the original music by Phoenix, where over the end credits we hear Love like a sunset part II by Phoenix Music Video (1:57) and smoke gets in your eyes,bryan ferry (3:04), unique takes on familiar themes.
Posted by Robert Kennedy at 1:22 AM